On the Hot Seat 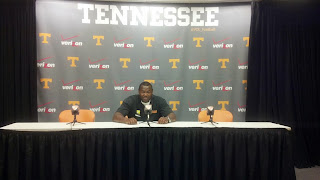 I had the opportunity to be on the field during the UT game to watch my cousin Devaun Swafford play. I am so proud of him!!! 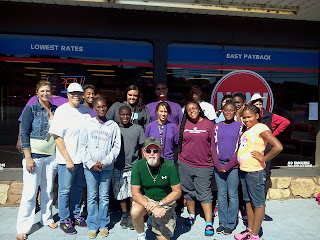 On September 14, 2013, the New Vision Youth held a yard sale fundraiser at the Title Max on East Stone Drive in Kingsport to give back to the community.

Making a Big Splash During his First College Football Year 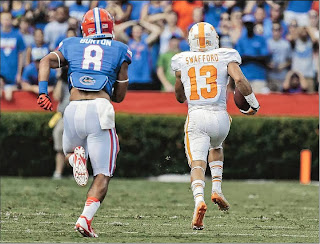 Tennessee's Devaun Swafford (13) outruns Florida wide receiver Trey Burton (8) after intercepting a pass and taking it 62 yards to the end zone for a touchdown, during the first haof of Saturday's Southeastern Conference game in Gainesville, Florida.

Devaun is a DB graduate, a Riverview resident and a member of the Central Baptist Church.
Posted by douglassriverview at 10:44 AM

The Executive/Working Board of the Sons and Daughters of Douglass Alumni Association, Inc. will meet in regular session this coming Saturday, September 21st.

The meeting will convene at 1 PM, in the Eastman Conference Room of the V.O. Dobbins, Sr. Complex, 301 Louis Street, Kingsport.

All board members and anyone with business before the board, are encouraged to attend this important meeting.
Posted by douglassriverview at 10:48 AM

As the New Douglass Alumni Board is Sworn In, Prez Says, Exciting 2 Years are Ahead 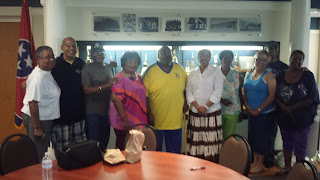 "We do solemly swear that we will carry out the duties and the functions of the Sons and Daughters of Douglass Alumni Association, Incorporated, and we will strive as officers of the Executive Board to maintain decorum and to carry out the financial business of the organization for the terms we are elected to.. so help us God."

President Releford says, the next term of the board is going to be an exciting one.

"We have a unique challenge ahead of us," President Releford says. "At our recent reunion, our alumni body delivered a mandate to us as board members to extend the hand of fellowship and bring onto our board, members of the Kingsport Ebony Club Alumni Association. They are our Sons and Daughters in reality, and they are the future Sons and Daughters of Douglass in principal. It's way past time for us to bring members of the Ebony Club into our organization, to combine what they are doing with what we are doing."

Releford says, both organizations can benefit from each other's strengths.

"We don't want Ebony Club members to lose their identity," he says. "They can offer us a younger, fresher approach to fundraising and community involvement. In turn, the Douglass Alumni Association can offer them our standing in the Kingsport community, our contacts and our connection to the legacy of Douglass High School. It's a win-win for both organizations."

He says, the board actually voted to bring in Ebony Club members in 1998. 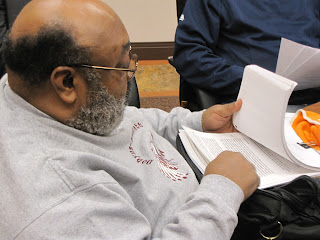 "I was looking over some of the old board meeting minutes," he says. "During this past Reunion's business meeting, our older members, especially the out-of-town ones were adamant about getting younger people onto our board. Our numbers are dropping every year.. we are losing many of our beloved members, and pretty soon, there will be no original alumni to celebrate and carry on the tradition of Douglass. The good thing is, the Ebony Club members already know about the Douglass School heritage, they were brought up in the shadow of the school building, and they know what its legacy means. We want them to be a part of the decision-making process that keeps the organization a vital part of Riverview and the Kingsport community."

Releford also says, look for a lot of fundraising during the next two years for programs and activities that benefit residents. Designated a charitable corporation by the Tennessee Secretary of State, and a 501(c)3 charity by the Internal Revenue Service, allows any donation to the Sons and Daughters of Douglass, Inc., to be tax-deductible.

"When it comes to our fundraising, we are not the type of organization that tries to get its name in the paper all the time," he says. "We participate in Kingsport civic activities not to get recognition or praise, but we do it because we are supposed to. We were taught at Douglass, to let our talents be felt, not flaunted. We are not the type of organization that is a publicity hound.. we do what we do in Riverview and Kingsport because we want to be good corporate citizens and neighbors in Kingsport."

Other business that came before the Sons and Daughters of Douglass Board at the meeting on August 17th, besides the Executive Board members swearing in ceremony, were more alumni wanting to purchase Douglass Auditorium seats. Louetta Hall said she and her sister Kathy Stewart also plan to purchase one, and the board updated the list of purchasers (look for a web story on the auditorium seat fundraiser soon.

NEXT SONS AND DAUGHTERS OF DOUGLASS BOARD MEETING: SATURDAY, SEPTEMBER 21, 2013.
Posted by douglassriverview at 8:29 AM 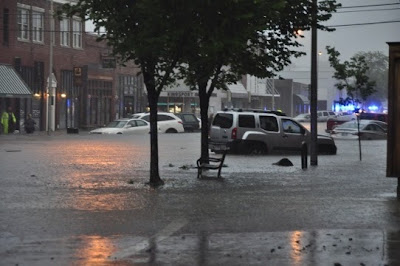 "GIVING BACK TO OUR COMMUNITY"

Inexpenseive prices and donations accepted.
Posted by douglassriverview at 11:26 AM

MUST SEE TV from Chattanooga: 2 Girls & Intruders in the House 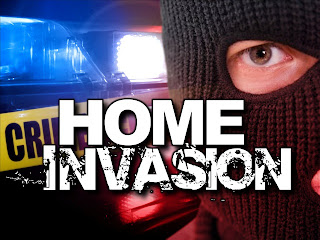 Two African-American girls, ages 11 and 12 in their home this past Saturday in Chattanooga, TN..
Intruders break in to steal items, and the oldest girl pulls her little sister into a closet to hide and she also calls 9-1-1..
They are saved, but the video will bring tears to your eyes at what was going through their minds during this terrifying time..

Every Douglass alumni and Riverview community parent needs to sit down and watch this with their children, to make sure they know what to do in a similar situation..

Click here to see the story from "Good Morning America" that uses video from WTVC-TV, where your Douglass Website editor works in Chattanooga

This story had the GMA anchors in tears, at the bravery of these two girls.
Posted by douglassriverview at 10:50 AM 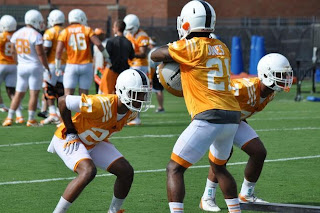 Malik Foreman of Kingsport and Riyahd Jones go through drills during UT practice this week at Neyland Stadium in Knoxville. (Photo: Daniel Lewis through Nooga.com)
Posted by douglassriverview at 4:23 PM

See the Live Broadcast of the President's Syria Speech

Posted by douglassriverview at 3:09 PM

There will be door prizes for the oldest and youngest grandparent, grandparent with the most grandchildren, and the grandparent who traveled the farthest.

Every grandparent is welcome to attend this free community event. For more information, contact Johnnie Mae Swagerty, (423) 429-7553.
Posted by douglassriverview at 3:40 PM

"How Will I Pay for College?" One Douglass Descendant Takes Care of the Little Things First

"The Douglass scholarship, in a way, got me started." 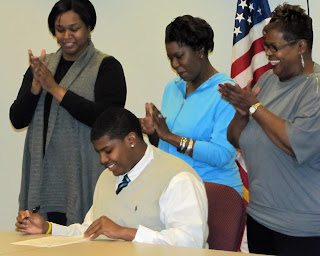 3 years ago, Brenton Leeper found himself a Dobyns-Bennett graduate, facing a big dilemma. He'd been a stellar football player for the D-B Indians, and received a football scholarship to Brevard College, north of Asheville, NC.

But that scholarship only provided room, board and classes. It did not cover any of the little things that a student needs to make the grade.
"At Brevard, it cost $14,000 dollars a semester," he remembers. "The football scholarship provided $11,000 dollars of that, and a Pell Grant, covered $2,000 dollars. The remaining $3,000 did not cover all the books that I needed, and 3 years ago I was looking to major in business. Books were essential, and I just couldn't afford them all." 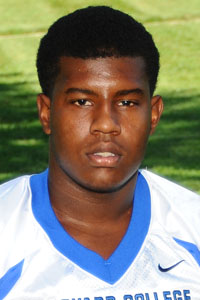 That summer between D-B and Brevard is where the Sons and Daughters of Douglass Alumni scholarship entered his life.

"That $500 dollars from the Douglass alumni, came right at the time that I needed it," says Leeper. "I had math that first semester, I had English.. I had all the basic first-year studies at that time. I had to buy 3 or 4 books that year, plus others as the semesters wore on.. Man, they were expensive. Books are an arm and a leg."

"That was $500 dollars I could just tell my nana (Mrs. Shelia Leeper) to keep, and not worry about trying to raise it at that time."


"The hope is that these young people will use the scholarship to, first of all, carry on the legacy of the Douglass school," says Douglass Releford (Douglass '64), president of the Sons and Daughters of Douglass Alumni Association. "By continuing their higher education, they are a reflection on the education their their ancestors got when they attended the school. The Douglass teachers always encouraged us to pass on what we have learned by attending college, and by helping today's descendants, we think we're fulfilling that goal."

All of the students who have received scholarships from the Douglass alumni, have used the money for its intended purpose. 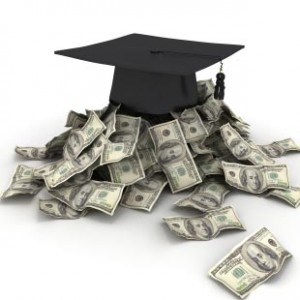 "We've helped fund the education for descendants who went on to become doctors, nurses, lawyers, accountants, financial managers, authors, teachers," says Releford. "Some went into the military, professional sports.. it's a good cross-section of careers in our goal to help the students get started right out of high school. Money for the scholarships comes from our alumni, and from the annual Douglass Alumni Memorial Golf Tournament that dedicated alumni members Frank Horton, Donald Hickman and John Hardy help us sponsor every year."

Releford says, many African-American students have difficulty coming up with the money for college at high school graduation.


"Studies have shown that the cost of college is almost unaffordable for folks in the black community, and unless students get some kind of academic or athletic scholarship, parents are in the hole real quick. The cost of just books alone can be staggering. Our scholarships are designed to help students who qualify get over the smaller financial humps, so they can concentrate on the bigger costs."

The Sons and Daughters of Douglass Alumni Board, considering scholarship applications at a meeting in the V.O. Dobbins, Sr. Complex 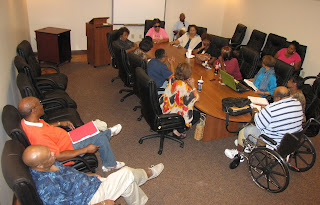 The potential scholarship recipent has to be the descendant of a Douglass alumni and that would be anyone who attended the school. The alumni has to have a current membership in the Sons and Daughters of Douglass Alumni Association. Recipients are required to fill out an questionnaire on where they want to attend college, then write an essay on their ambitions, and how the scholarship will help them achieve that goal. A selection committee from the alumni Board of Directors judges the applications, and the ones that qualify get notified immediately. Releford says, there is always a time deadline between the awarding of the scholarship, and the time the potential college student needs it.

Brenton says, applying for a Douglass alumni scholarship was a no-brainer for him and his family.. 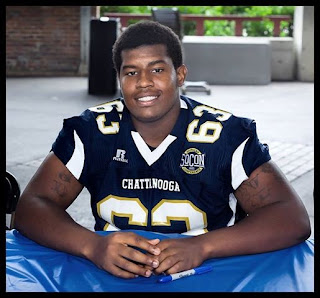 "Riverview is where I grew up," he says. "Most of the folks in the Riverview community and in the alumni association watched me grow up. They've always been there for me growing up whenever I needed encouragement. It only made sense that I apply for it, because they all knew what kind of person I am. Same for everybody else who applies for the Douglass scholarship."

"It's always been one big family."

Times have changed for Brenton Leeper. He's now at the University of Tennessee-Chattanooga, an offensive lineman.. the same position he played at Brevard. He also has bigger apirations.

"I'm thinking of changing my major, maybe to communications," he says. "There's a whole lot you can do with a communications degree.. every job out there wants people who know how to talk, how to get a message across and communicate with people. I've also been thinking about a Navy career, too, especially with the travel and exploring different parts of the world."

He credits the Douglass alumni scholarship with keeping his feet planted firmly in the right direction.

"It was a blessing having that to lean on," he says.

"It helped in the small ways most people don't think about."
Posted by douglassriverview at 10:08 PM