Snow This Week in Kingsport

THESE PICTURES OF DALE STREET FROM JOHNNIE MAE SWAGERTY 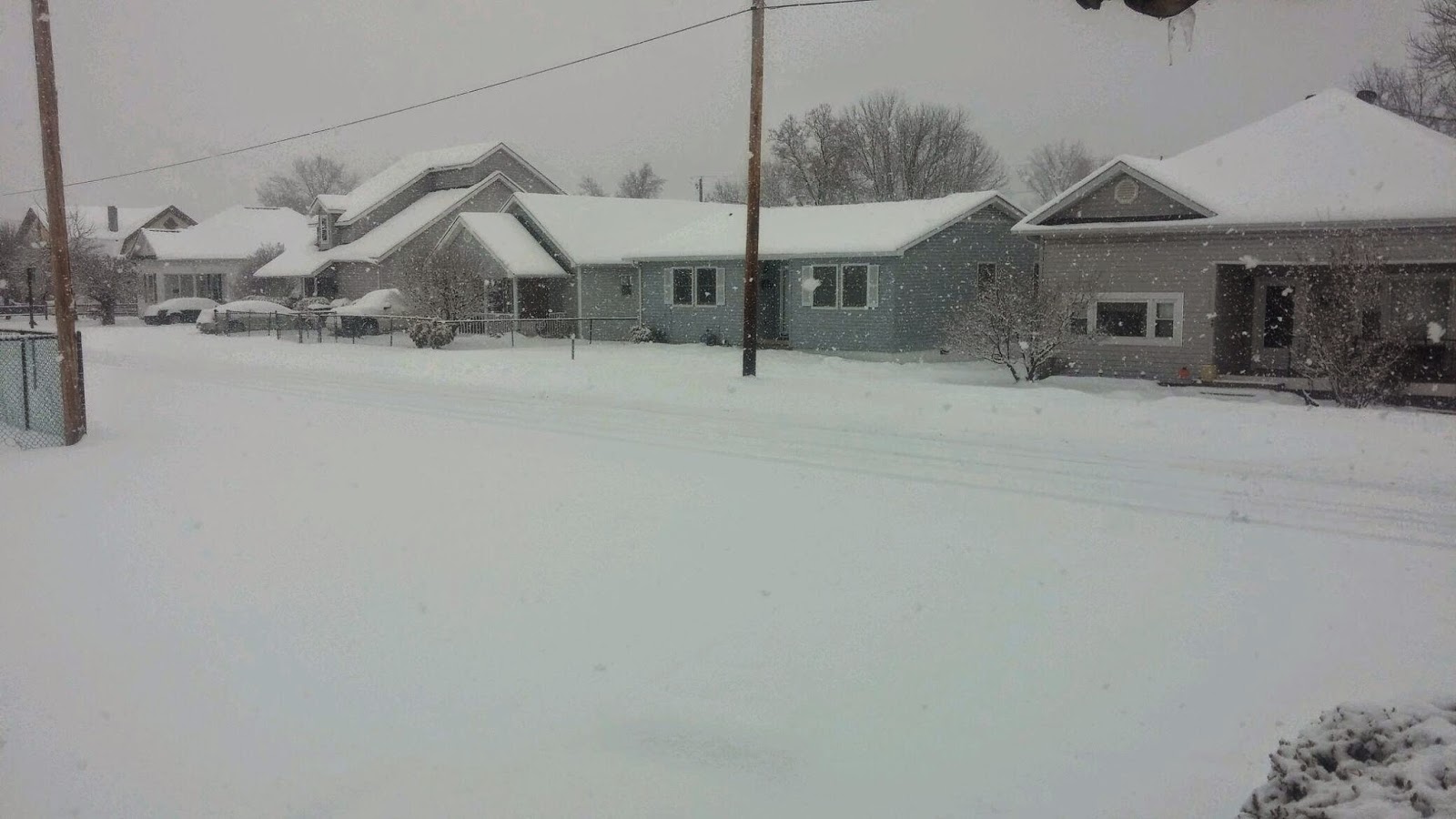 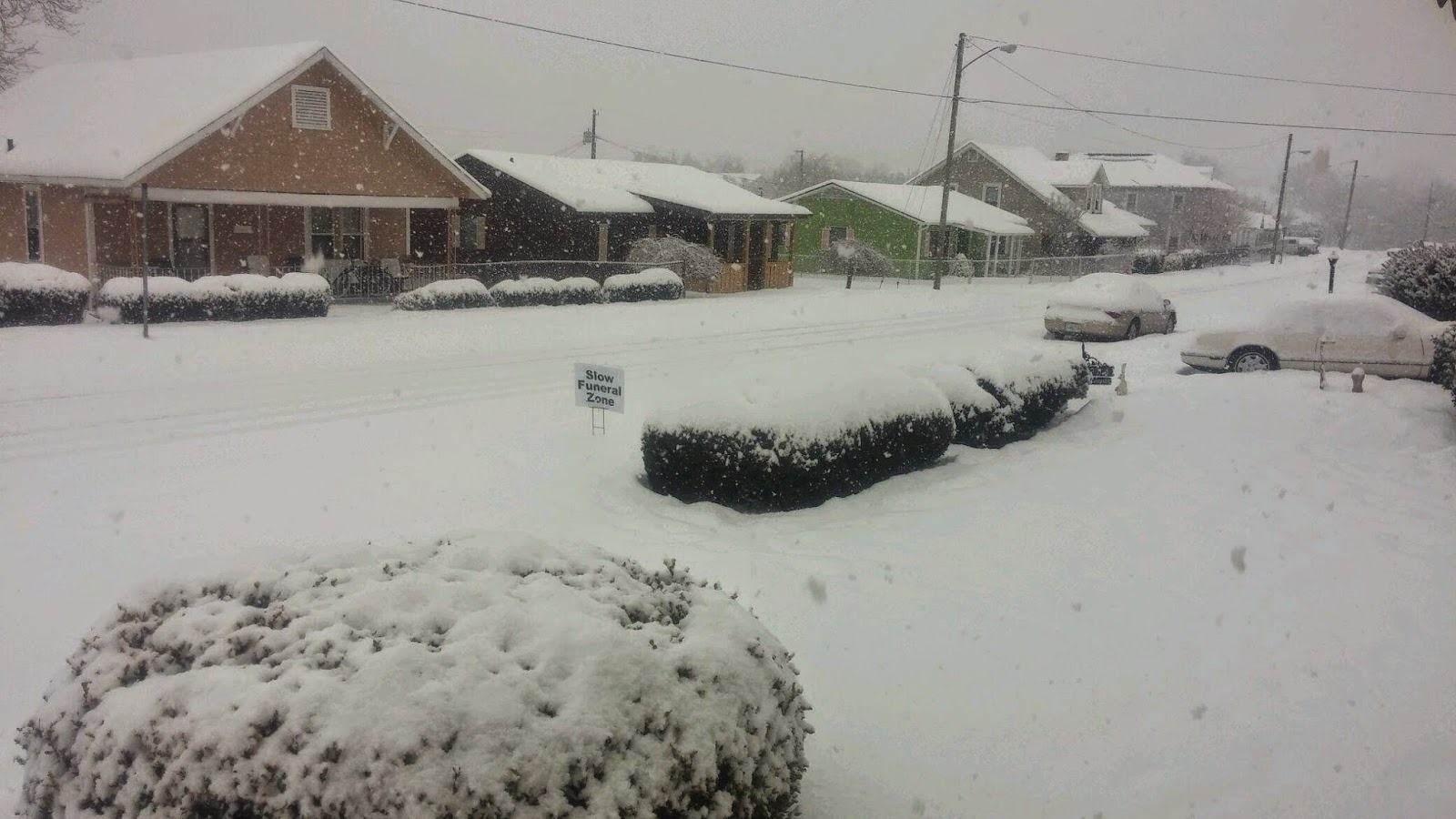 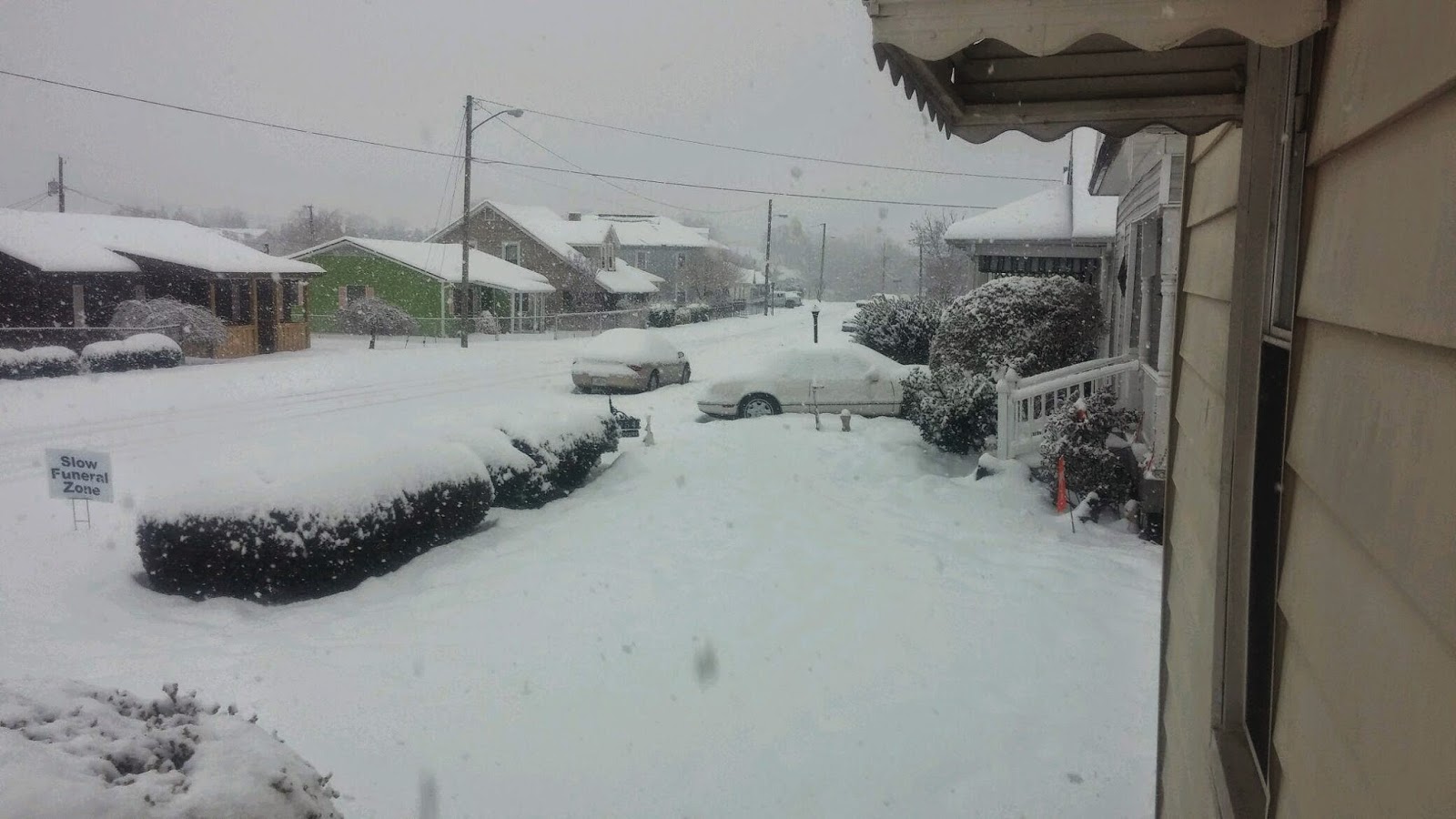 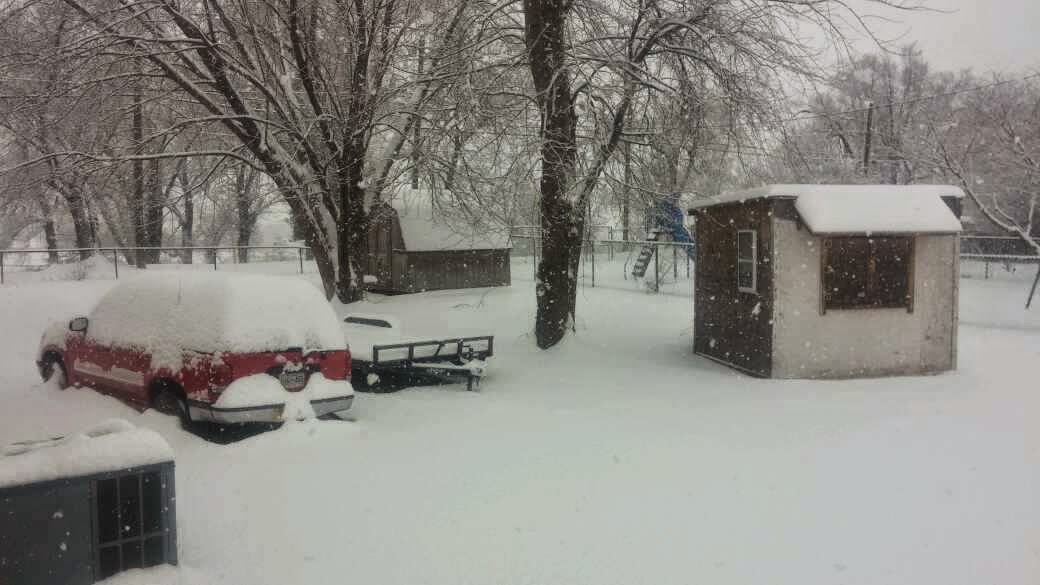 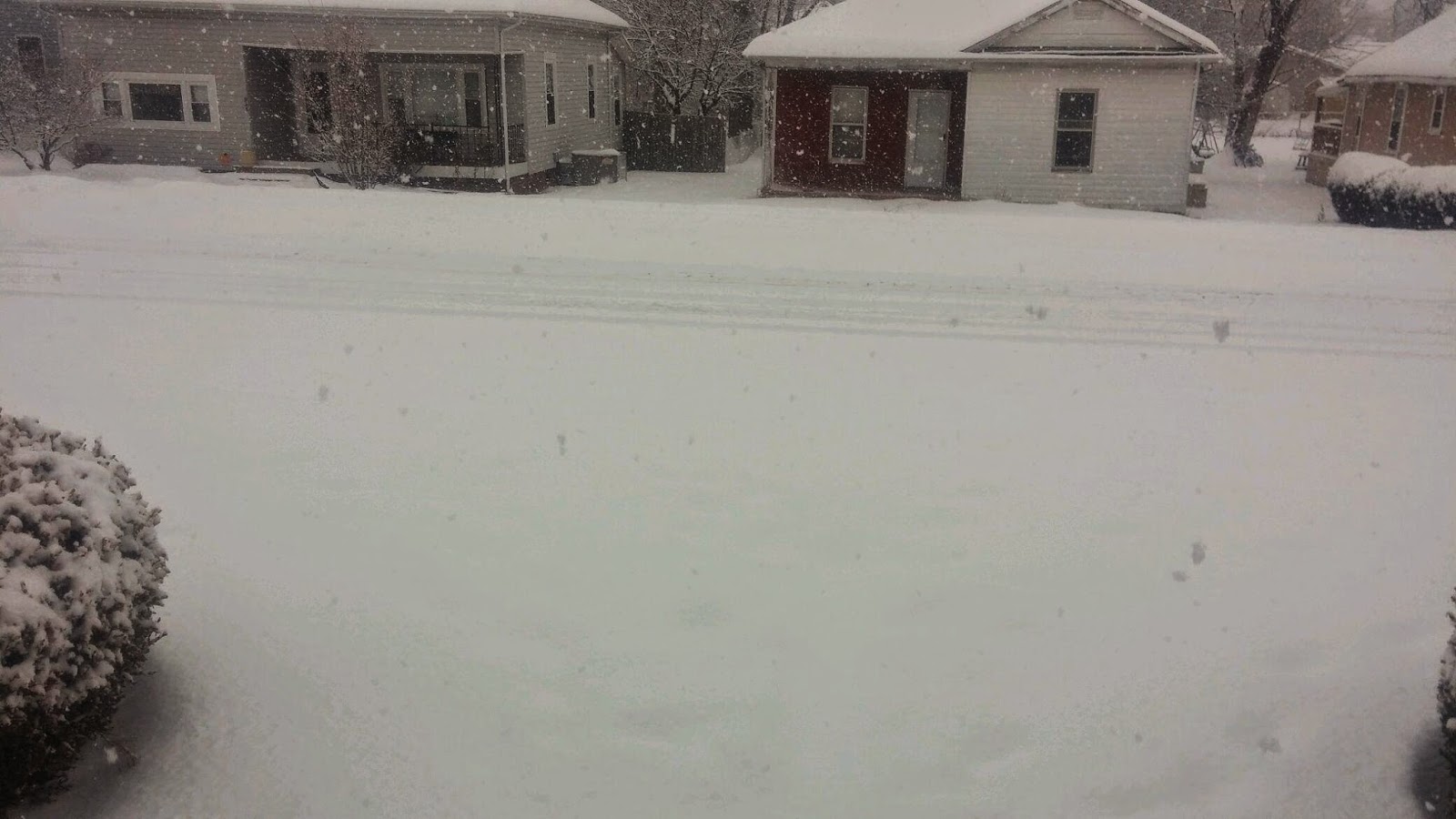 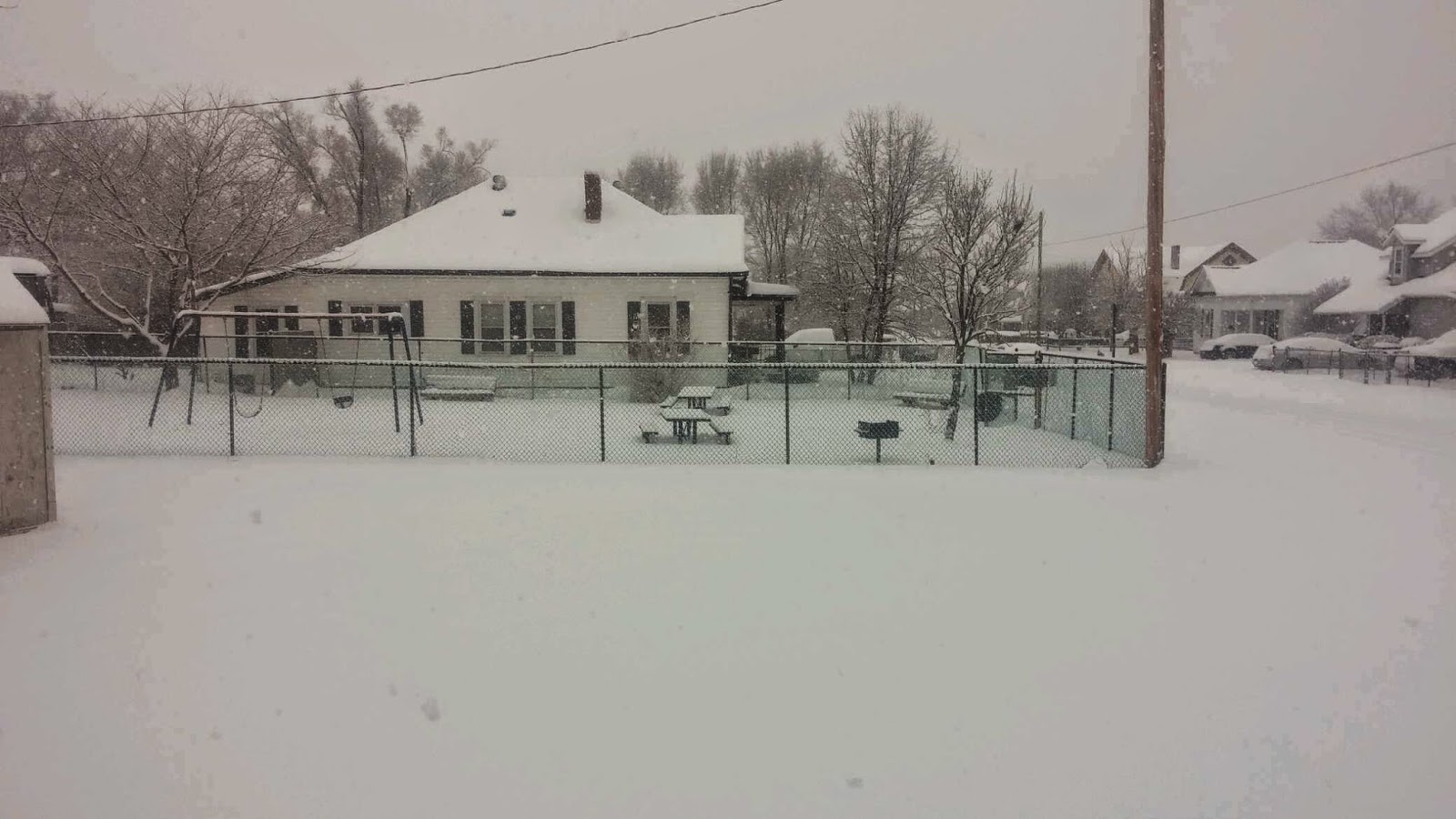 THESE PICTURES PLAYING IN THE SNOW FROM JAQUETTA HALE 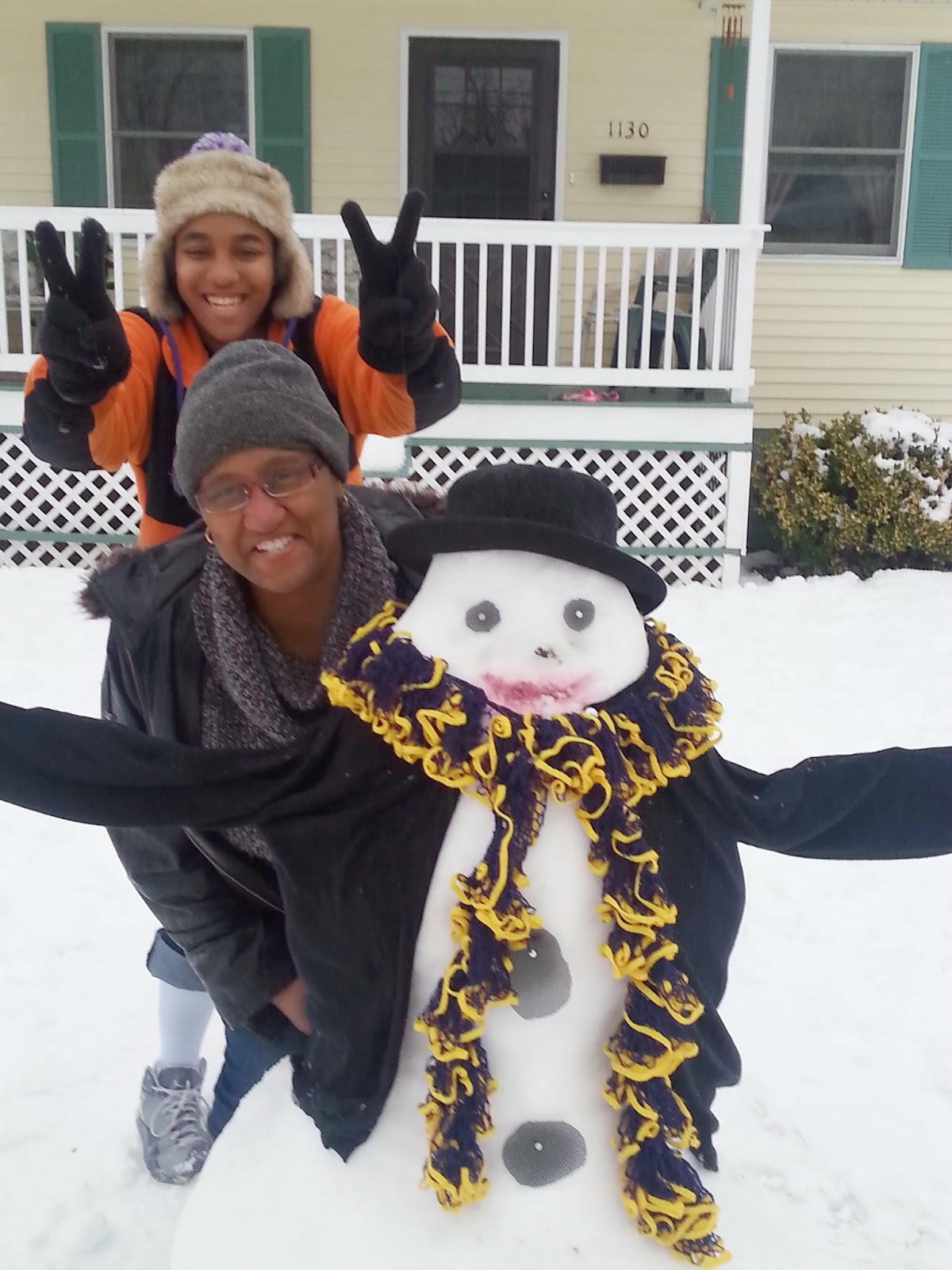 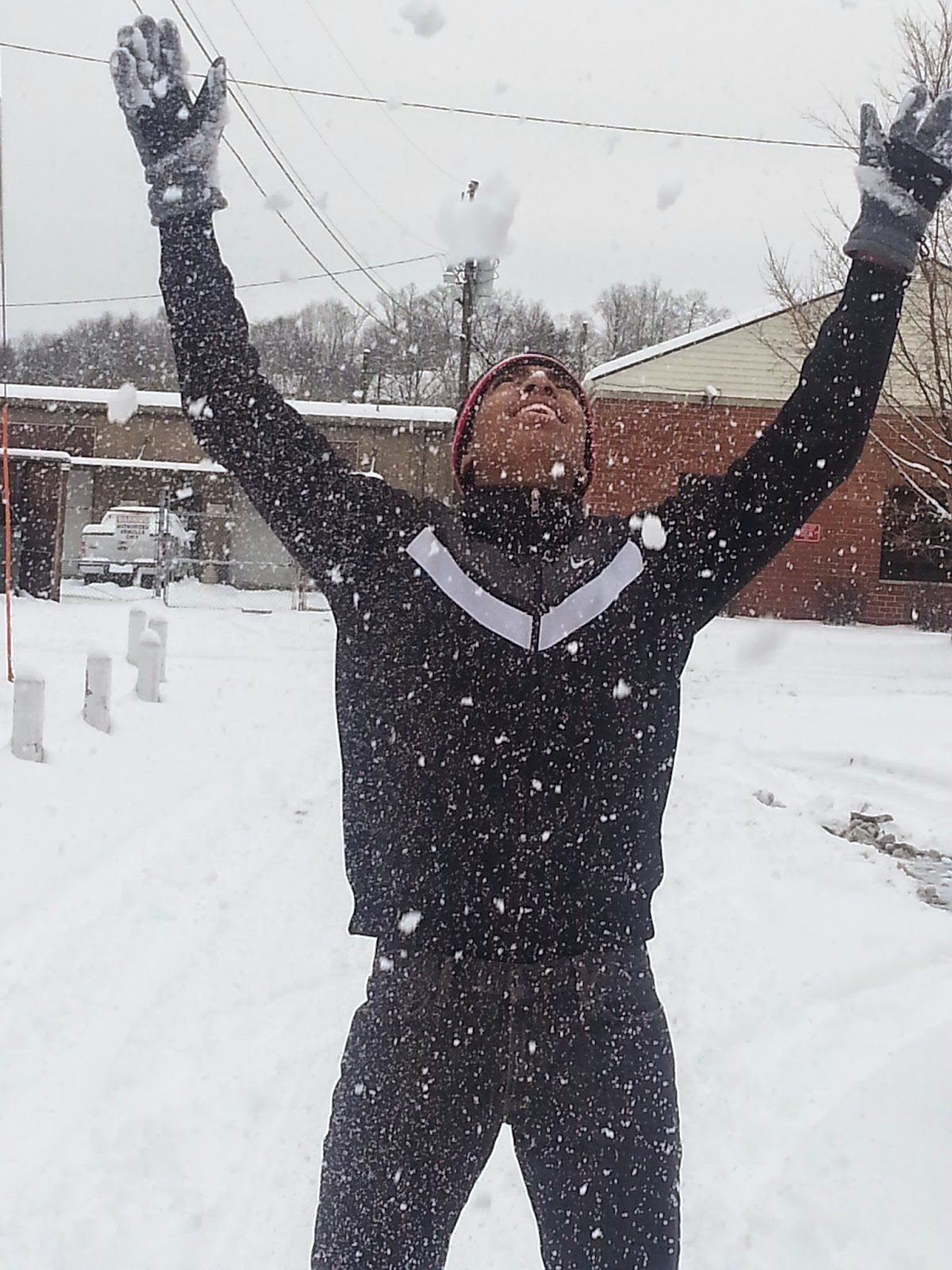 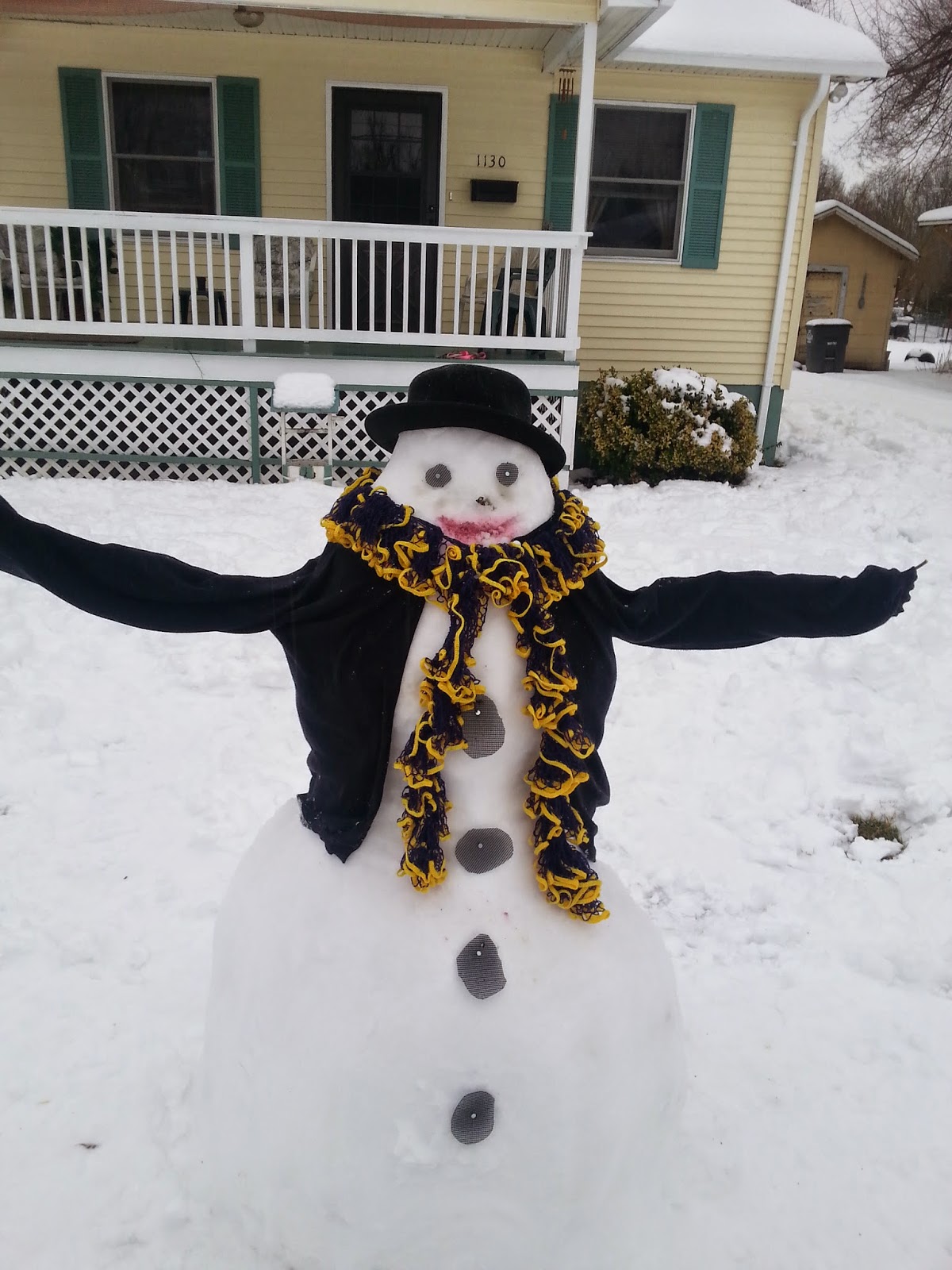 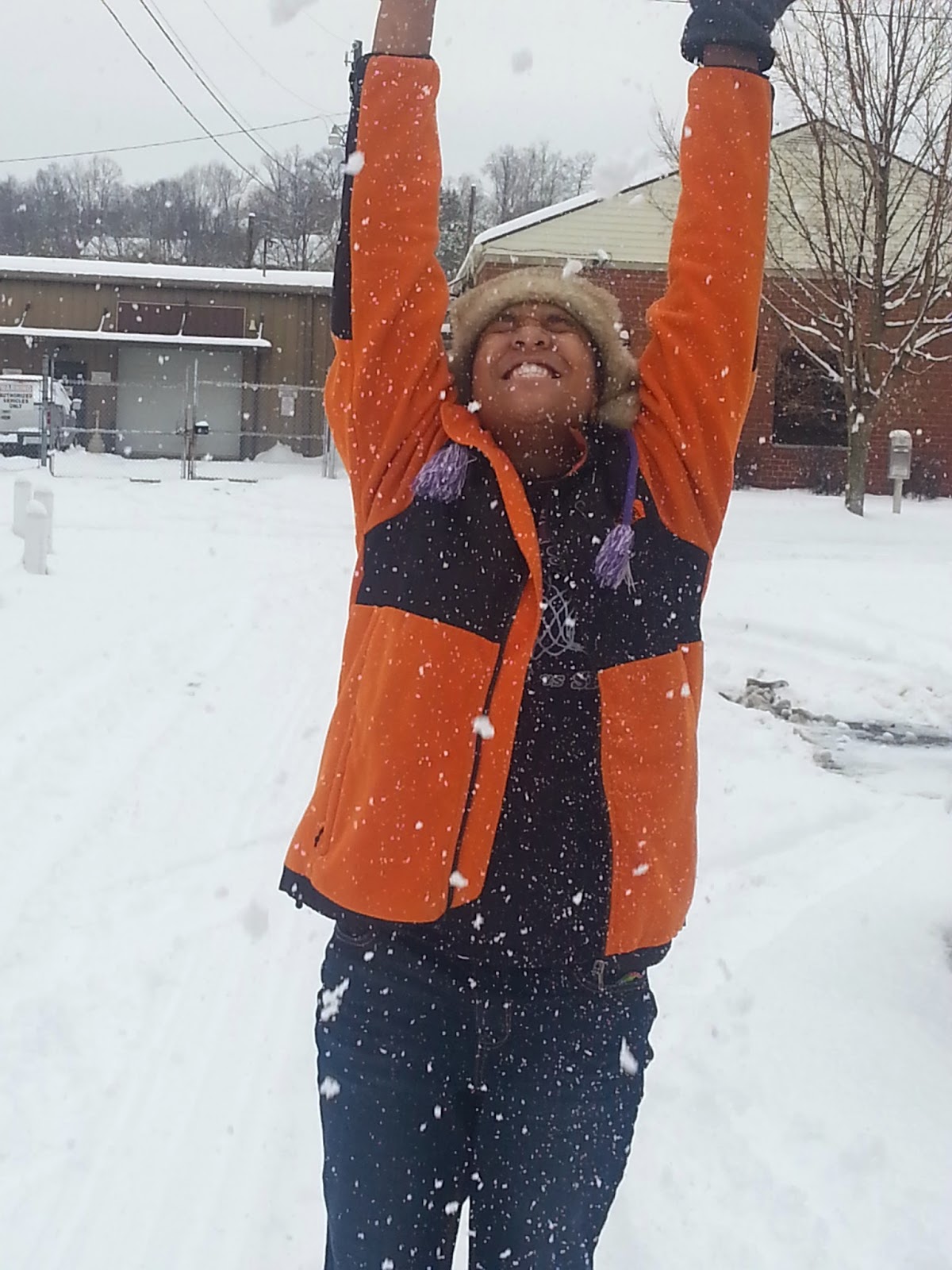 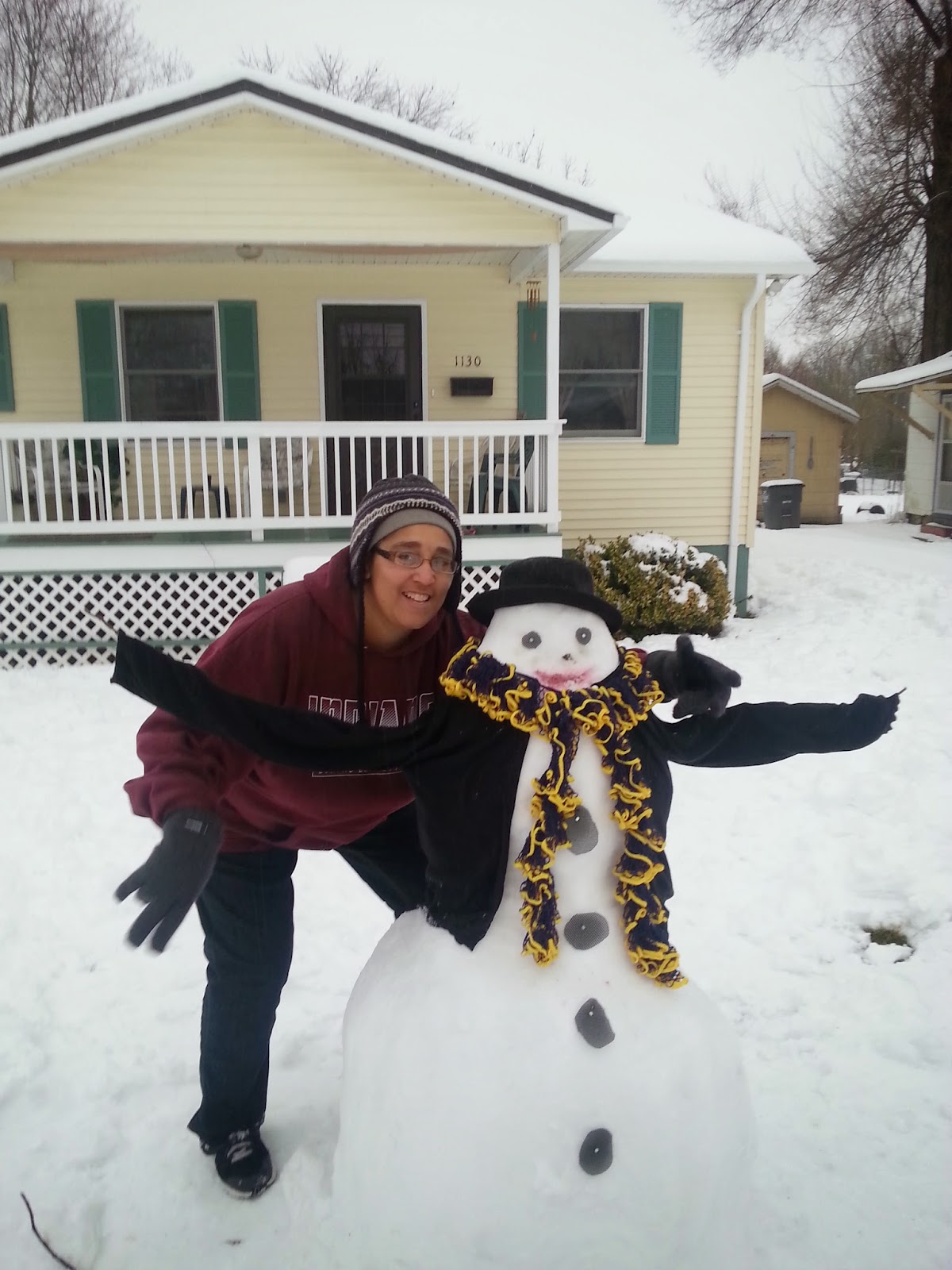 THANKS, Y'ALL!     EVERYBODY, PLEASE SEND YOUR PICTURES TO DOUGLASSRIVERVIEW@GMAIL.COM       SPRING:  THREE WEEKS AWAY!
Posted by douglassriverview at 9:53 AM 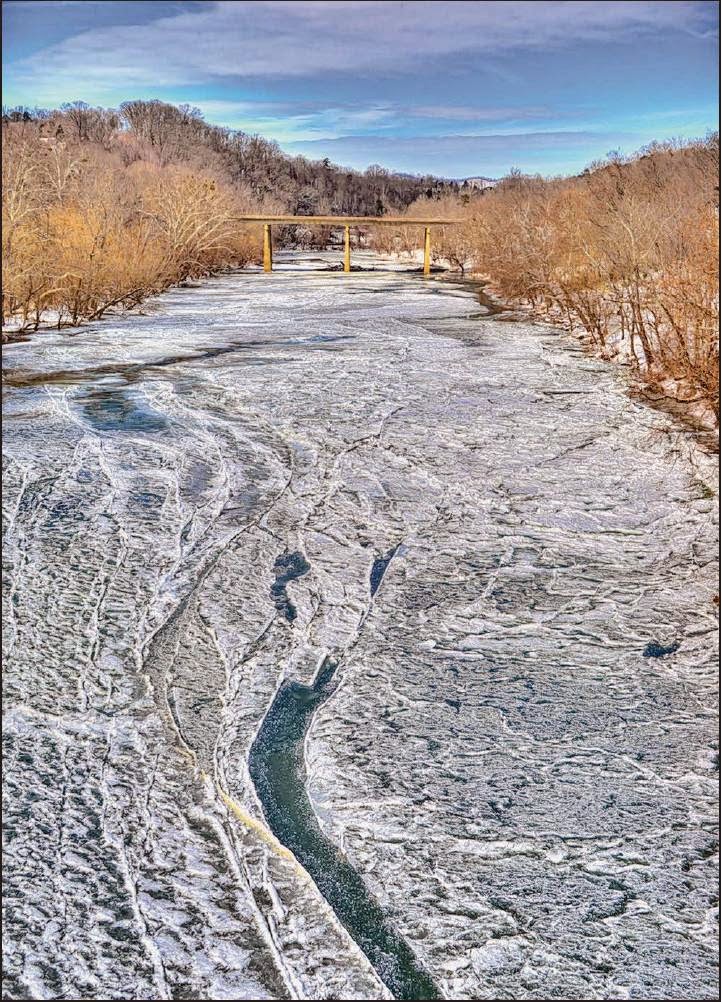 
Click on the picture to make it larger
Posted by douglassriverview at 12:51 PM

The meeting of the Sons and Daughters of Douglass scheduled for February 21, 2015 has been canceled because of impending weather.

We will reschedule it for a later date.


President Douglas Releford
Posted by douglassriverview at 11:39 AM

The former Swift High School and College, Rogersville, TN is being honored in a special way.

Please click here to read about the honor for our neighbors and friends in Rogersville! 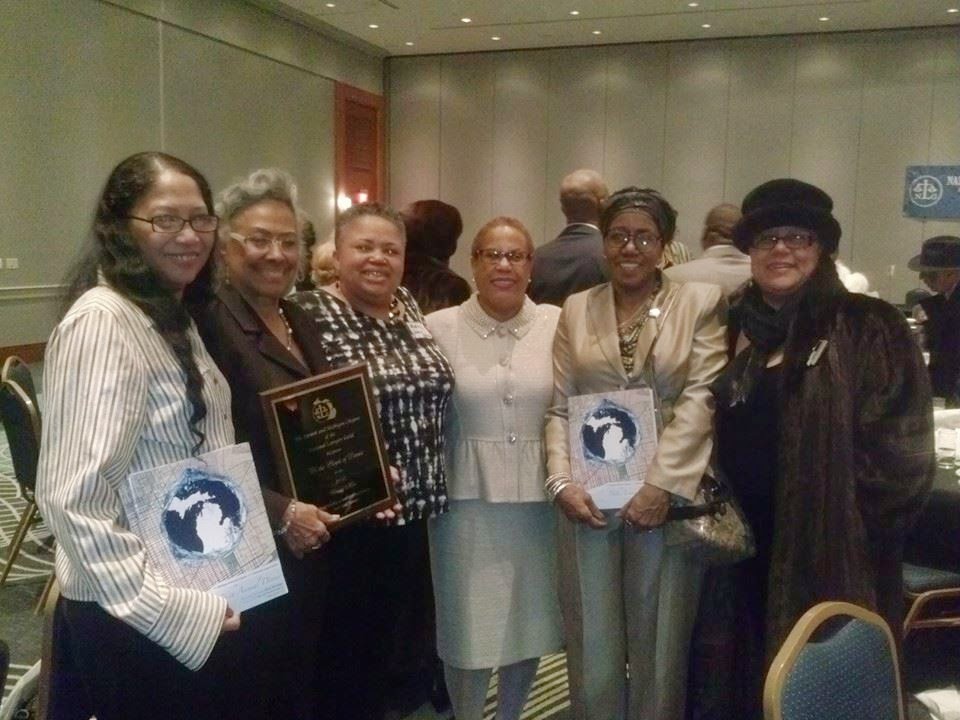 Just a note to my Kingsport family that I, along with 4 of my community activist sisters, received the 2015 Undumg Heroes Award from the National Lawyers Guild of Detroit and Michigan.

I definitely uplifted my family and my Kingsport roots! More information will be available on our organizational webste: www.wethepeopleofdetroit.com
Posted by douglassriverview at 3:49 PM

The Delaney's are Golden! 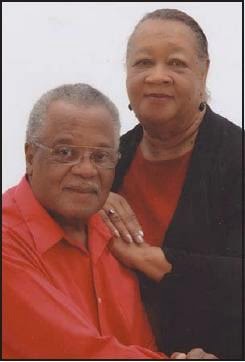 George H. and Phyllis (Brice) Delaney celebrated their 50th wedding anniversary on Feb. 6, 2105.
The couple was married Feb. 6, 1965, in Kingsport by the late Rev. James Gaines.
George retired from Holliston Mills after 39 years of service. Phyllis retired from the Hawkins County School System.
The union was blessed with four children: Gregory Delaney, Tonya (Delaney) Collins, Naiesha (Delaney) Robinson; and sister Felicia (Brice) Powell.
They have five precious grandchildren: Devin Collins, Christian Collins, Scotty Delaney, Jordan Powell and Jaxon Robinson.
A second honeymoon trip to California is being planned by their children and grandchildren.
Posted by douglassriverview at 8:56 AM

Both teams were released Saturday.

Josh Holt joined Foreman on the boys’ first team while D-B coach Charlie Morgan was named the Big 7 coach of the year. Patrick Good of David Crockett joined Holt and Foreman on the first team, as did Science Hill’s Peyton Wingate and Tennessee High’s Garrett Crandell.

Morrisette shared player of the year honors with Science Hill’s Lakeisha Gregory. Both players made the first team along with Savannah Felgemacher of Volunteer, Taylor Carmichel of Daniel Boone and Kelsey Stoops of Tennessee High. Volunteer’s Josie Salyers was named the underclassman of the year.
Posted by douglassriverview at 8:53 AM

The annual Soul Food Gathering will be held at 5 PM in the Riverview Community Room of the V.O. Dobbins Sr. Complex on Wheatley Street in Kingsport.

The event is sponsored by the New Vision Youth, in partnership with South Central Kingsport Community Development, Riverview Residents Association, the Riverview Boys and Girls Club and the Kingsport Parks and Recreation Department.
The menu includes fried chicken, meatloaf, chitlins, fried fish, macaroni and cheese, scalloped potatoes, crackling corn bread, corn, fried potatoes, roast, greens, oxtails, pigs feet, baked beans, cole slaw, chicken and dumplings, drinks and homemade desserts. Healthier options include salads, baked chicken, baked fish, rice, and trays of vegetables and fruit.
The meal is free, and there will also be door prizes. Food will be served until it’s all gone. There will be no carry outs.
Posted by douglassriverview at 8:19 PM

New Vision Youth, in partnership with South Central Kingsport Community Development, Riverview Residents Association, and the Kingsport Parks and Recreation Department  are sponsoring a "Get on the Bus" Black History field trip to the historic McKinney Center in Jonesborough.

Youth needing permission slips should go by the V.O. Dobbins Center and pick one up.  Participants are asked to bring money for lunch at the Olde Towne Dairy Mart.
Posted by douglassriverview at 8:12 PM

Get Ready to Reunion, Douglass Alumni! 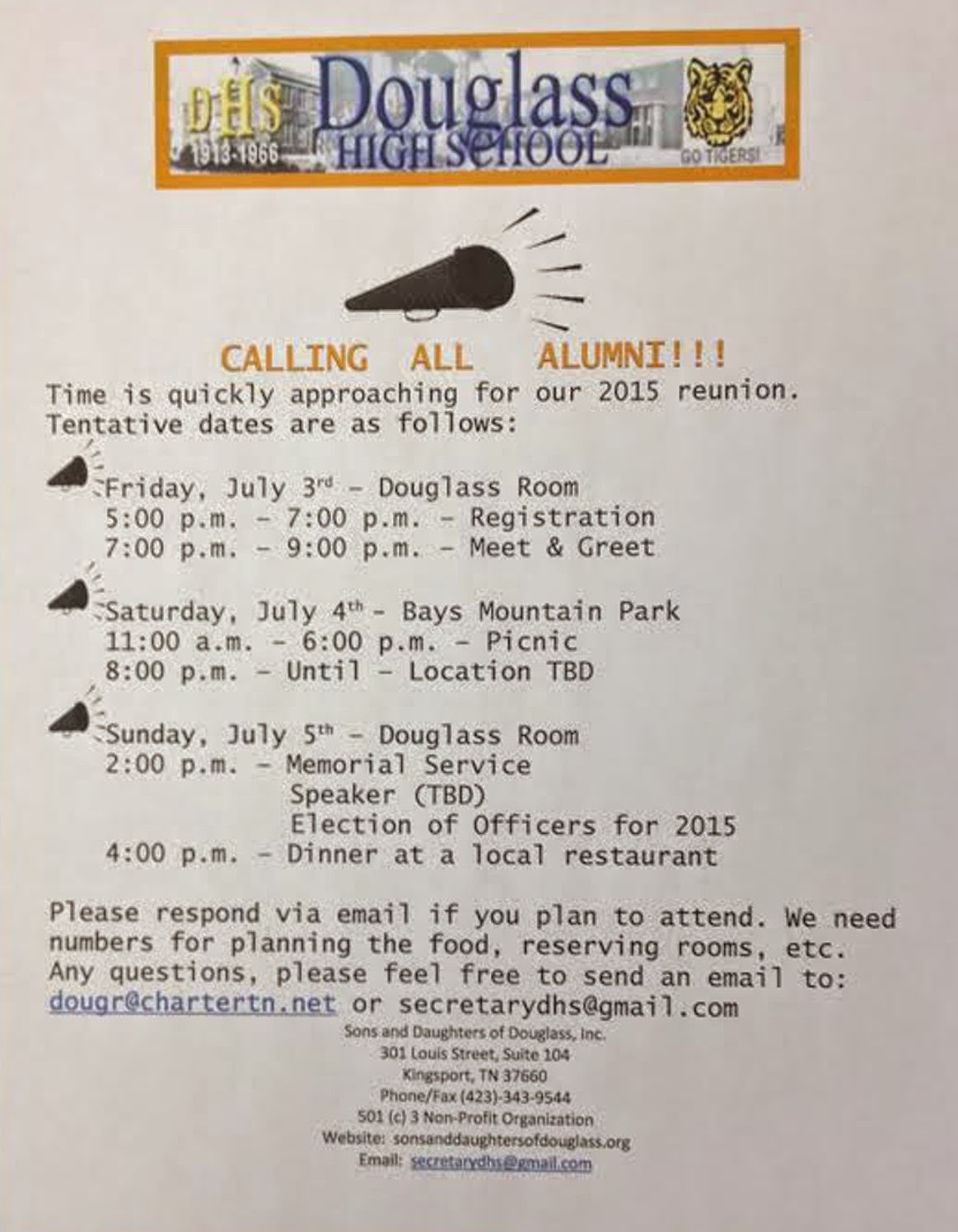 SONS AND DAUGHTERS OF DOUGLASS 2015 REUNION FLYER, KINGSPORT
Posted by douglassriverview at 10:24 PM 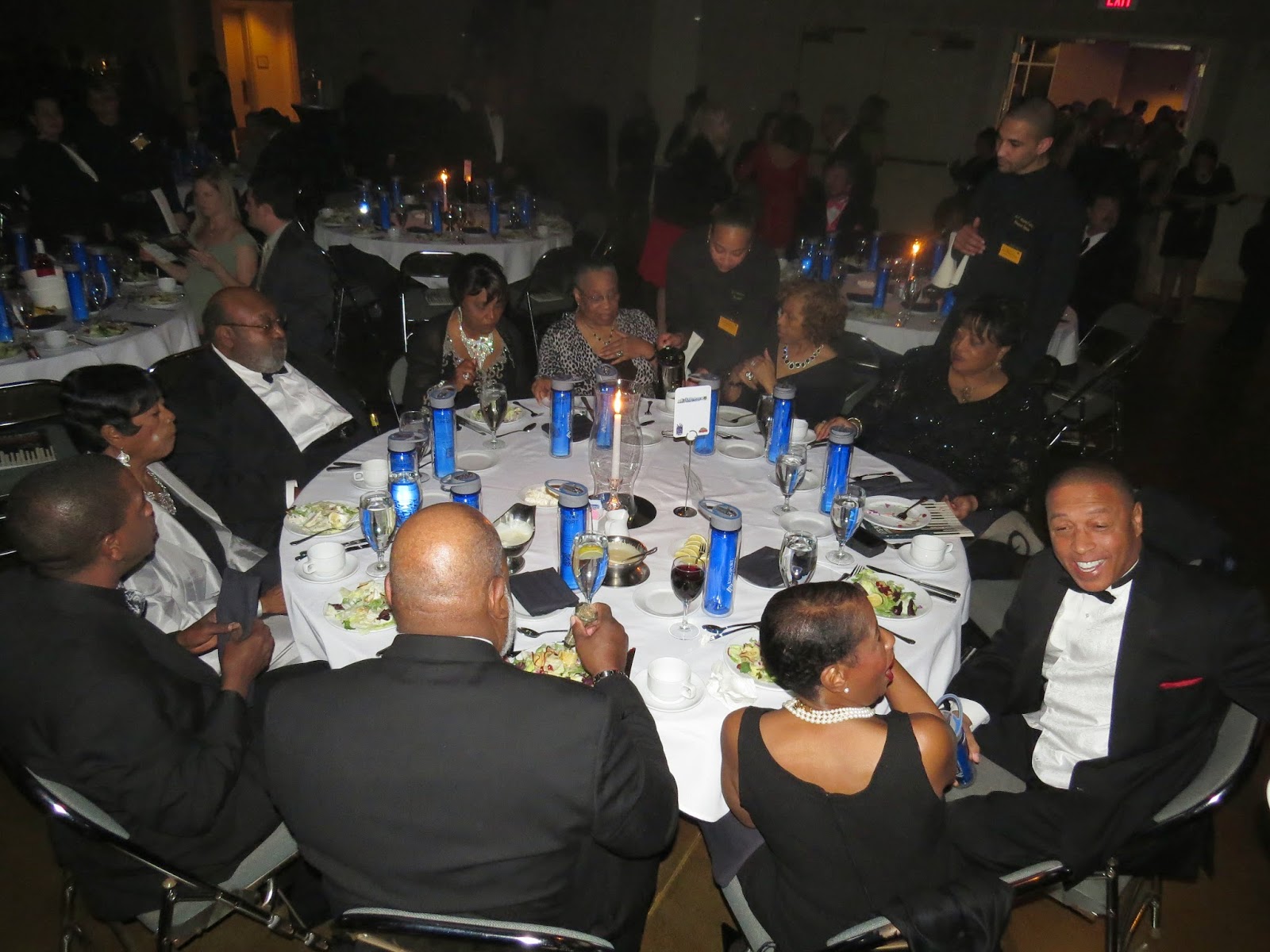 It's the annual chance for members of the Sons and Daughters of Douglass Alumni Association to meet and greet Kingsport's business community.

It's also the chance to shake some booty.

The Kingsport Chamber of Commerce held its 68th annual dinner at the Meadowview Conference Center, complete with awards, speeches, and dancing to the tunes of the acclaimed band "Party On The Moon," a crowd favorite. 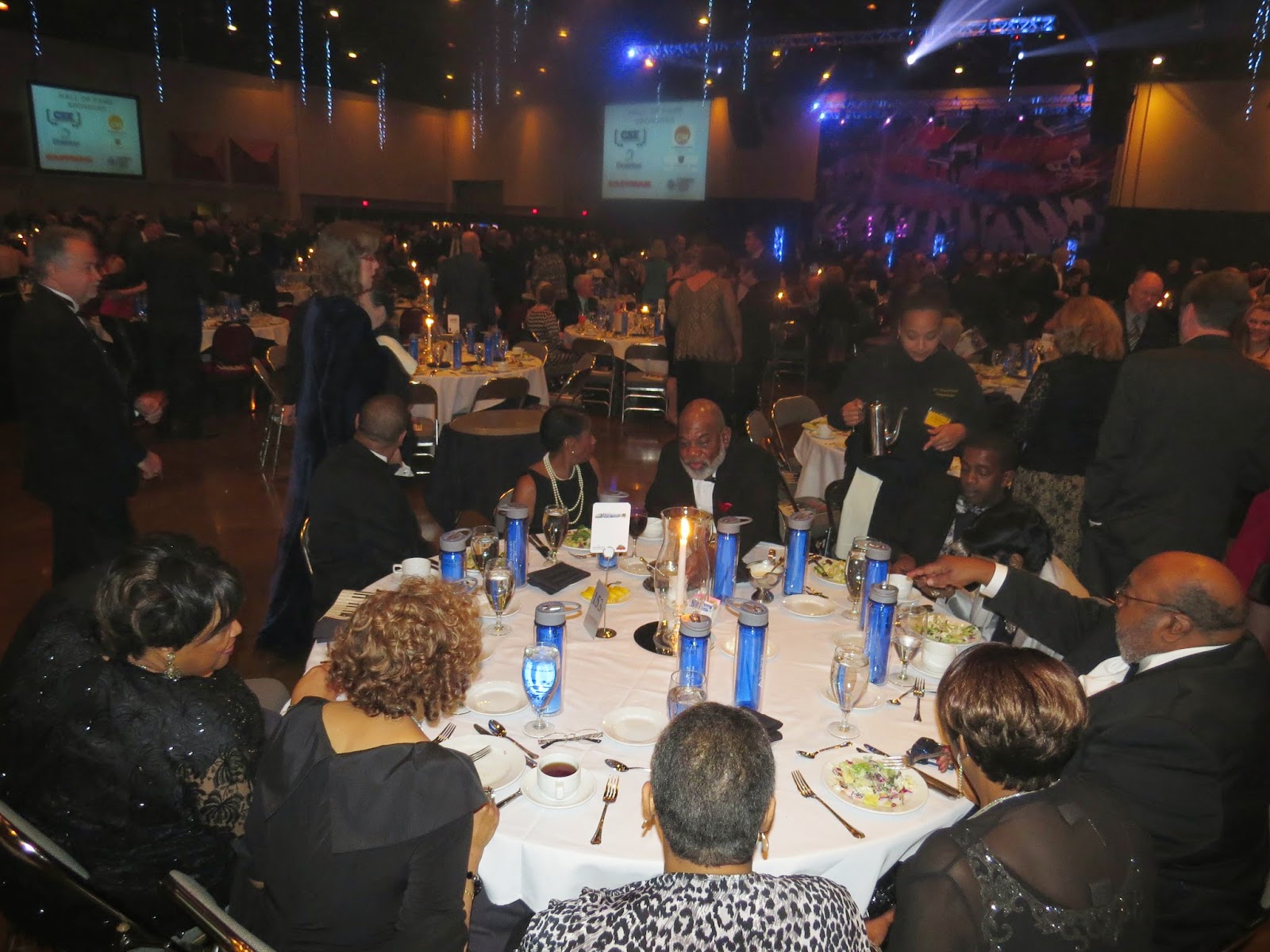 Douglass alumni were among the 1,700 attendees at the banquet, that also touted many of the city's achievements during the past year.

"This was a great outlet for us to attend," says alumni president Douglas Releford.  "You get to meet a lot of people, and it also gives us the chance to mingle with the people whose businesses keep the city's economy going and growing.  It's a very prestigious event and we are glad to be here."

It's the third banquet for the alumni association, having been a member of the Chamber of Commerce that long.

"This helps us get our name and our community purpose out there as a non-profit organization," Releford says.  "Our attendance lets folks in the Kingsport business community know that the Sons and Daughters of Douglass Alumni are active participants in the Kingsport community.  We stand ready and able to support the community whenever and wherever necessary."

A SLIDESHOW OF THE CHAMBER DINNER IS BELOW

Billed as "Kingsport's social event of the year," the chamber says the event is the largest chamber annual dinner in the United States.  "Kingsport is on a roll," incoming Chamber chairperson Isaac Webb, district manager with Appalachian Power.  "We're poised for even greater growth and more success this year and in the years to come."

Presented with the Chamber's Lifetime Member Award, was Betty DeVinney, a former Eastman vice-president.  She is the 27th recipient of the award. 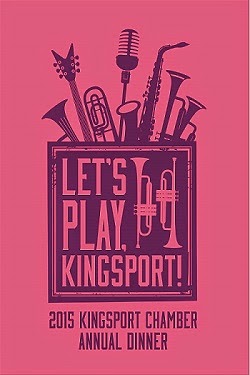 Various community projects celebrated by the Chamber and dinner attendees, were Eastman Chemical's growth by acquiring Taminco, a global speciality chemical company in Allentown, PA.... the re-opening of ASG's former Blue Ridge glass plant and the 300 jobs it brings.... the arrival of IntelliHARTx, a health casre revenue cycle business locating 350 to 500 jobs to downtown Kingsport.... the opening of the Tennessee's newest Welcome Center, located on I-26 South between Wilcox Drive and Rock Springs Road.... breaking ground ground for the Kingsport Carousel, featuring 32 hard-carved animals downtown.... the relocating of the Eastman ballfields to "Brickyard Park," the General Shale property behind Dunbar Street in Riverview, known as "Clay Hill" to the local residents (the fields will be known as "The Clay Hill Ballfields").... and of course, the reason for that relocation:  construction of Eastman's new $74 million dollar global corporate business center on Wilcox Drive in Riverview, to house 300 new employees on the site of the old ballfields.  The building is the centerpiece of the company's $1.3 billion dollar "Project Inspire" project.

Kingsport Chamber president Miles Burdine, who also stopped by the Douglass Alumni table to say hello during the dinner, was named "Executive of the Year" by the Tennessee Chamber of Commerce and Industry.  This is the first year the award has been bestowed. 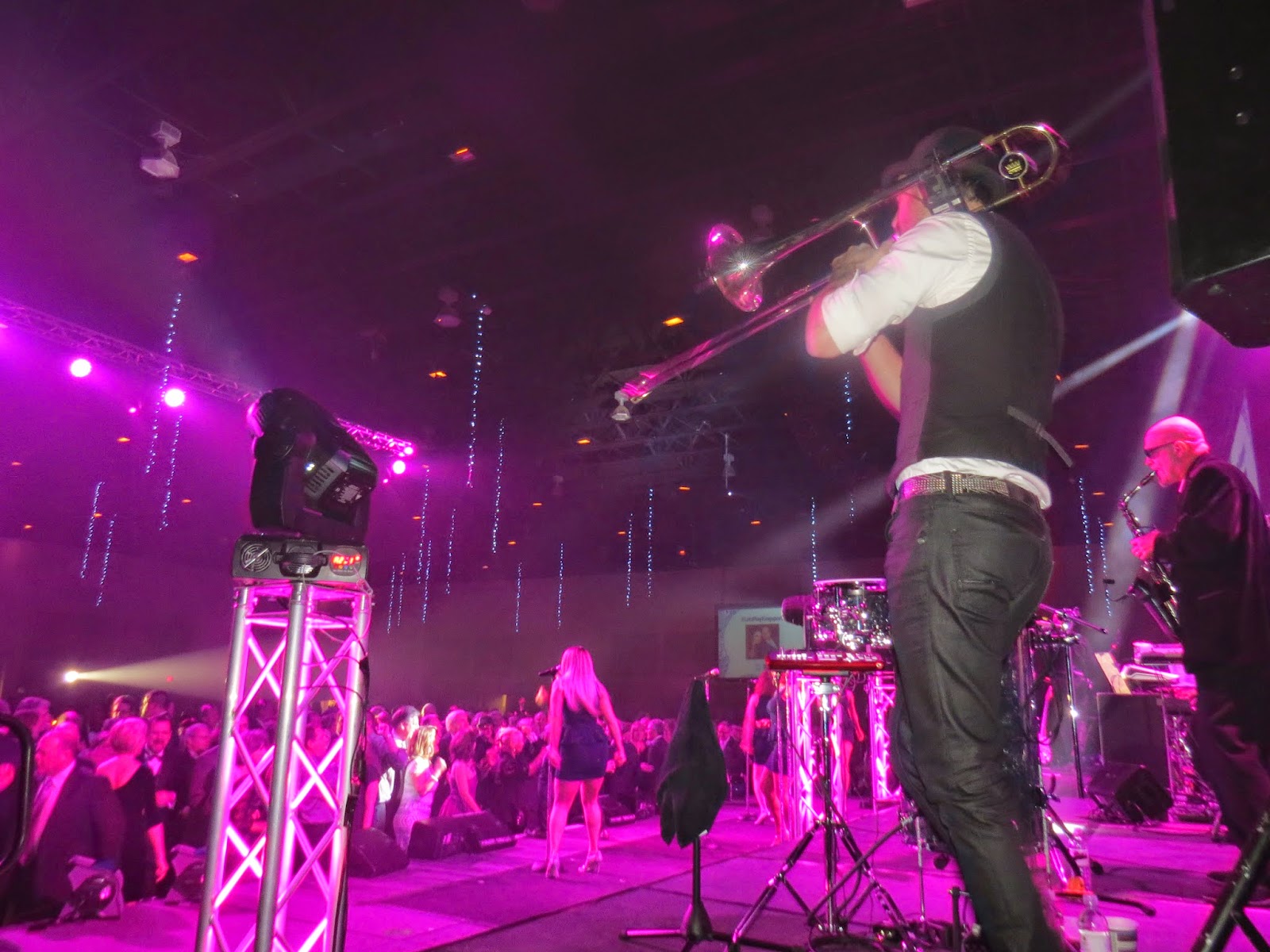 And headlining a night of great entertainment, a familar name returned to the Chamber stage.  They’ve played at President Obama’s Inaugural…They’ve played for Eli Manning’s Wedding…They’ve played for Donald Trump’s New Year’s Eve Party for the past five years… …and now the Number One Party Band in the Nation came back again to play for the Kingsport Chamber of Commerce Dinner guests..

BELOW IS VIDEO OF ONE OF THE SONGS BY "PARTY ON THE MOON."  WE ACTUALLY GOT IN WITH KINGSPORT'S MOVERS & SHAKERS, WHILE THEY WERE "MOVING AND SHAKING!"

Posted by douglassriverview at 9:51 PM

Below are pictures in slide shows of Kingsport's annual celebration of the Reverend Doctor Martin Luther King, Jr.'s birthday.

THE MARCH IN DOWNTOWN KINGSPORT

THE CANDLELIGHT VIGIL TO COMMEMORATE DR. KING, AT THE LAMPLIGHTER THEATER, DOWNTOWN KINGSPORT

Posted by douglassriverview at 10:49 PM

THIS STORY COURTESY THE KINGSPORT TIMES-NEWS
By NICK SHEPHERD
nshepherd@timesnews.net 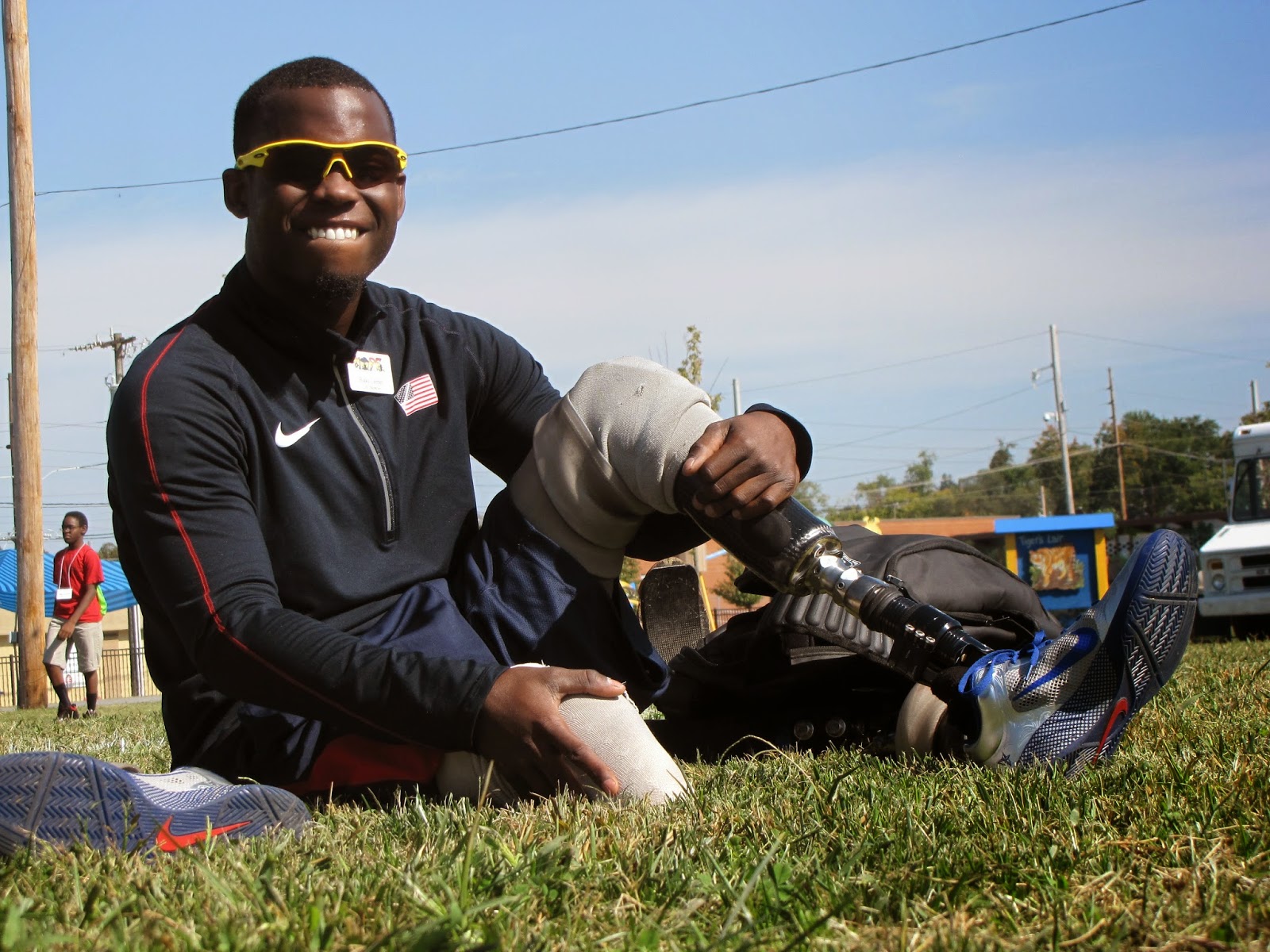 Blake Leeper will be moving from the track to the hardwood when he plays in the Celebrity All-Star Game during the NBA’s All-Star Weekend, according to Sports Illustrated and other media outlets.
Leeper, a Dobyns-Bennett High School alum, won the silver medal in the 400-meter dash during the 2012 Paralympic Games in London, setting the U.S. record. He also won the bronze medal in the 200 meters.
Leeper is no stranger to basketball, playing both basketball and baseball during his time at Dobyns-Bennett. He was a part of the team that won D-B’s 2,000th game and later the District 1-AAA championship.
Leeper was born with both legs missing below the knees because of a birth defect. He has worn prostheses since he was 16 months old.
Leeper will be joining Mo’ne Davis, the Little League World Series phenom, comedian Kevin Hart, Nick Cannon, rapper Common, Michael Rapport, Grizzlies owner Robert Pera, Ansel Elgort, Anthony Anderson, Knick assistant GM Allan Houston, Kristen Ledlow and WNBA stars Tina Charles, Skylar Diggins and Schoni Schimmel.
He will be coached by either Carmelo Anthony and Spike Lee or by ESPN radio hosts Mike Golic and Mike Greenberg. The game will be played on Friday, Feb. 13, at 7 p.m., in Madison Square Garden.
Posted by douglassriverview at 9:02 AM