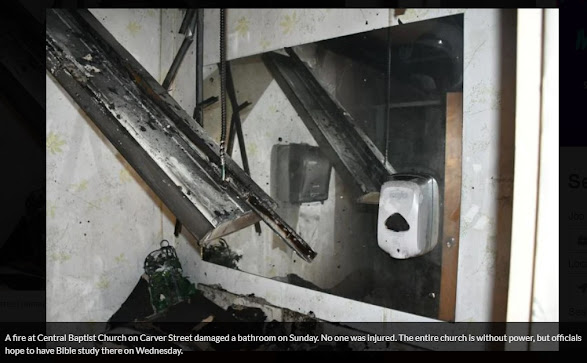 KINGSPORT — A fire that tore through a restroom at Central Baptist Church has been ruled accidental, fire officials said.

“Once they can isolate the electrical systems in the area affected, I don’t see why they wouldn’t be able to resume activities in the other portions of the building,” Vandagriff said. 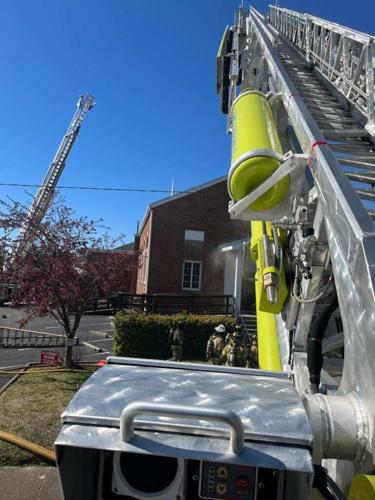 An alarm system at the church sounded at 3:16 p.m. Sunday, and firefighters immediately responded and doused the fire. No one was injured in the fire, which happened in the basement of the original church that has stood on Carver Street for more than 100 years.

The fire happened underneath the area that was once the old sanctuary but now houses the youth group.

The women’s restroom is now charred, but it did not spread out to the church’s community pantry, just down the hall.

Sonya Clark, head of security for the church, said church officials are still looking at the extent of the damage.

She said officials would be at the church Tuesday to investigate further.

ServPro has started to clean up the affected area. Right now, the entire church is without power. She said there is a Bible study on Wednesday.

“We’re hoping to have the power back on by Wednesday,” she said, and cleanup may still be occurring.

She asked the community to keep the church in its prayers.

“Just the prayers are appreciated that we can get back to our normal operations as soon as possible,” she said.

All the state tournament demons — despite being so close on numerous occasions — were exorcised by the Dobyns-Bennett boys basketball team Saturday inside the Murphy Center.

The Indians used a nearly flawless overtime period to defeat Bearden 69-60 in the TSSAA Class 4A championship game.

The Indians (33-6) shot an impressive 4-for-5 from the field and 8-for-10 from the foul line in overtime to ice the program’s first state championship in 77 years. The last time D-B won the state title, President Franklin D. Roosevelt was in the final month of his life.

“I felt like we won this game three different times and it felt like it kept getting taken away from us,” Dobyns-Bennett coach Chris Poore said. “Our guys didn’t bow down or give. They just kept finding a way.”

Jack Browder — named the tournament MVP — put together a performance for the ages, scoring a game-high 30 points on 9-of-15 shooting and going 10-for-11 from the free-throw line.

He also grabbed 13 rebounds, several in clutch situations, to finish with a double-double.

Browder’s work in the overtime period will be talked about for generations after he netted nine points and made one of the most clutch 3-pointers in school history with 1:37 left to put D-B up 59-56.

On the subsequent possession after the 3, Class 4A Mr. Basketball finalist Elijah Bredwood was whistled for an offensive foul, the Bearden star’s fifth of the game.

Browder came down on the Tribe’s next possession and hit a layup with 1:10 left to make it a two-possession game. That shot ultimately sealed the deal for the Indians. 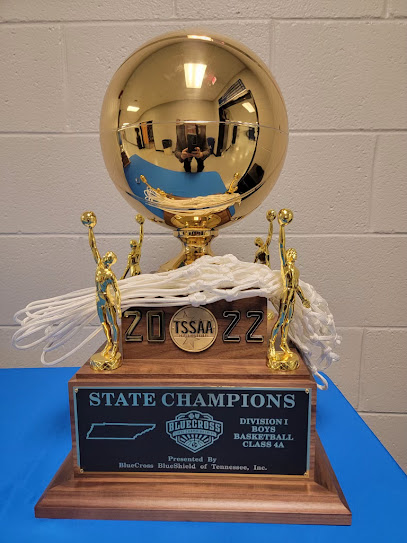 “This means a lot,” Browder said. “I have an older brother that played here and my dad was the quarterback on the football team.

“It means so much to our town to do something that we haven’t done in 70-something years.”

The Indians — who had stellar guard play throughout the tournament — flipped the script in the final by turning to their bigs, and Malachi Hale finished with 16 points.

Hale and Browder combined to go 13-for-21 from the field. Hale finished with seven rebounds.

Hayden Moseley nailed a 3-pointer as time expired in regulation to cap a massive rally by Bearden.

The Bulldogs (31-7) trailed 39-24 going into the fourth quarter but turned up the pressure and forced the Indians into six turnovers during the period.

“This group just showed a lot of resilience,” Poore said. “They don’t go down when they get punched. There is so much belief in each other that it’s unbelievable.”

Moseley finished with 25 points — scoring 17 in the fourth quarter — before fouling out in overtime.

Bredwood finished with 13 before also fouling out in extra period.

The Bulldogs shot 33.9% from the field despite a red-hot fourth in which they went 10-for-17. However, their luck ran out in OT when they made only 1 of 9 attempts.

“Any time you’re at the fringe of giving up or picking up, we picked up,” Bearden coach Jeremy Parrott said. “We would’ve gone to the press earlier, but we were already in foul trouble. We were just keeping it in our back pocket until our backs were against the wall.”

As they did in their earlier tournament games, the Indians started on fire, hitting their first three shots and jumping to an 8-2 lead.

D-B shot 5-for-12 in the first quarter when the Indians were enjoying the Jonavan Gillespie and Browder show. Bredwood picked up his second foul with 3:22 left in the opening period and Bearden was having a tough time without its star on the floor.

The second quarter was much of the same for the Indians, who limited the Bulldogs to 5-of-11 shooting and forced three turnovers.

In a splendid first half, Browder scored 12 points on 5-of-7 shooting from the floor and hit a big 3-pointer from the corner in front of the press row.

FOR THE TROPHY CASE

The state title is D-B’s first in one of the “big three” sports since the Indians won the 1964 football championship.

“Being from Upper East Tennessee, we don’t get any recognition at all,” Browder said. “Bearden won a few years ago, but everything past Knoxville doesn’t get recognition. We kept that on the inside and we played well as the underdog.”

Posted by douglassriverview at 12:35 AM Arthur L. Bradley, Sr., 88, devoted husband and father, passed away on Friday, March 11, 2022, after a lengthy illness.  His family members were by his side in his final moments.  His last six years were spent enjoying life with his loving wife, son, and daughter-in-law at their home located in Helena, AL.

Arthur was born on August 1, 1933, to Andrew T. Bradley Sr. and Sarah Ellen Carr Bradley in Rogersville, TN.  He was the second of six children. Arthur attended Price Public Elementary School and went to high school at Swift Memorial Junior College, which served both high school and college students.  He was a member of the Central Baptist Church in Kingsport, TN.

After completing high school, Arthur joined the Army and was stationed at Fort McClellan in Anniston, Alabama.  He was assigned to the Chemical division.  When he finished his duties with the Army, Arthur received an Honorable discharge in October 1955.  While in the Army, Arthur met his soulmate for life, Dorothy Thomas.  They married November 24, 1955 and have lived a happy life for over 66 years.  To this union they had a daughter, Cheryl Ann, and a son, Arthur Jr.

Arthur Sr. was employed for 32 years at Arcata Graphics, later named Quebecor Printing, as an electrician.  He retired in 1993. After retirement, he worked on dulcimer guitars and was often found working in the wood shop at the Kingsport Senior Center and taking trips with the senior citizens.

The Graveside Service will be held on Wednesday, March 16, 2022, at 10:00 am EST at Oak Hill Memorial Park with Pastor Perry Stuckey officiating.

The family requests that in lieu of flowers to please send donations to the Leukemia Foundation.

The Bradley family acknowledges with deepest gratitude the words, cards, messages, and kindness given by many family and friends during their time of bereavement.

To share memories and condolences with the family please visit www.oakhillfh.com

The care of Arthur L. Bradley, Sr. and his family has been entrusted to the staff of Oak Hill Funeral and Cremation Services.

Posted by douglassriverview at 8:46 PM


Since the Douglass Alumni Board meeting is canceled today (Saturday, March 12, 2022), we decided to show you what caused the cancellation.

Click "play" on the arrow above TWICE.  This is outside the V.O. Dobbins Sr. Complex, looking at Louis Street.  That's Central Baptist Church in the background.  It's a winter wonderland in the homeplace today!

Posted by douglassriverview at 9:43 AM

Sons and Daughters of Douglass Alumni Board Meeting

The Sons and Daughters of Douglass Alumni Board will meet on Saturday, March 12, 2022, weather permitting.

The meeting will begin at 1 PM, in the Eastman Meeting Room of the V.O. Dobbins, Sr. Tower, 301 Louis Street in Kingsport.

Again, the meeting will be held, weather permitting.

Posted by douglassriverview at 8:32 PM 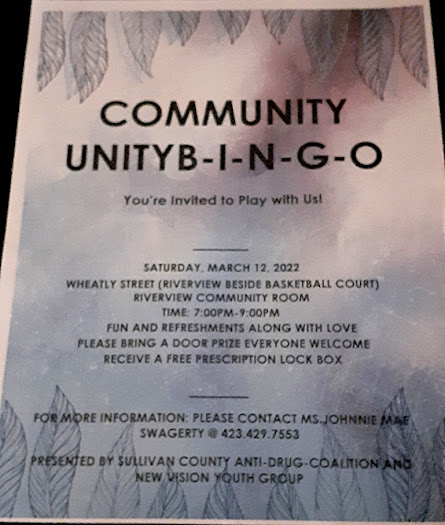 Posted by douglassriverview at 8:22 PM