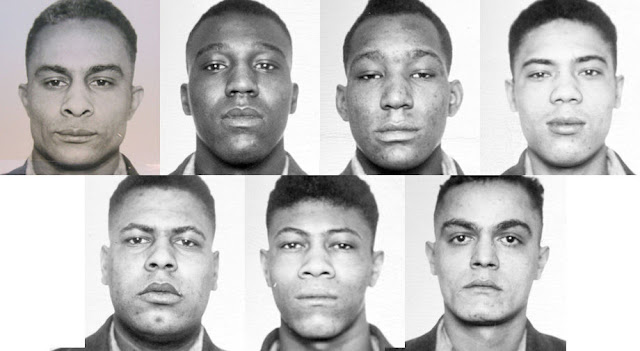 'These men were executed because they were Black and that's not right': VA Governor Northam pardons Martinsville Seven who were executed in 1949 rape case

This story courtesy the Richmond Times-Dispatch, via the Bristol Herald-Courier
August 31, 2021

Seven Black men executed 70 years ago for the rape of a white woman in Martinsville were granted posthumous pardons Tuesday by Gov. Ralph Northam acknowledging they were denied due process of law and received racially-biased death sentences.

Four of the "Martinsville Seven" died in Virginia's electric chair on Feb. 2, 1951, and three on Feb. 5, 1951. The executions were carried out over pleas for mercy from around the world -- the most executions for a crime against a single person in state history and one of the largest in U.S. history.

"These men were executed because they were Black and that's not right," said Northam, addressing at least five relatives of the seven and dozens of advocates in the Patrick Henry Building Tuesday. The room broke out in applause, shouts, crying and hugging he announced he was going to pardon the men.

The pardons do not address the guilt of the seven, but serve as recognition from the Commonwealth that they were tried without adequate due process and the death sentences were racially-biased, said Northam's office.

For much of Virginia's history the death penalty for rape was largely, if not exclusively, reserved for African Americans. From 1908, when Virginia began keeping central execution records, to 1951 when the seven were executed, all 45 persons put to death for rape in Virginia were Black.

"Race played an undeniable role during the identification, investigation, conviction, and the sentencing of" the seven men, states the pardon which notes each was found guilty in trials by juries of all white men.

Tuesday was Grayson's birthday. He was the last of the seven to die. Former Richmond Sheriff Andrew J. Winston was a young city magistrate in 1951 when he witnessed Grayson's execution. In a 2004 story about the Martinsville Seven in the Richmond Times Dispatch, Winston, since deceased, said of Grayson, "He was very composed. It appeared to me that they must have given him a sedative."

"I would think they'd almost have to," he said.

Descendants of some of the men, including former Richmond mayor Rudolph McCollum Jr., a great nephew of Grayson and nephew of Millner, and James Grayson, of Baltimore, Grayson's son, were on hand for a meeting in the governor's office Tuesday.

Before the meeting began Tuesday, McCollum, noting he was meeting some relatives for the first time, said, “It’s almost like a family reunion. The circumstance are weird but it’s a beautiful thing."

Prior to Northam's announcement, McCollum, given a chance to address those in attendance, said of the executions, "It's one particular wound that continues to mar Virginia history."

James Grayson said, "I'm looking for forgiveness. I want closure. I want them to be able to realize that somebody cares."

The seven pardons bring the total number of pardons issued by Northam since taking office to 604, more than the previous nine governors combined, from Charles S. Robb onward combined, said his office.

His office said Northam has acted on over 2,000 pardon petitions and that the large number of pending petitions is due to an influx received since he took office, coupled with the thousands of petitions that were pending review when former Gov. Terry McAuliffe took office in 2014.

Northam announced new steps to streamline the pardon process in May.

The pardons for the Martinsville Seven appear to be the first posthumous pardons granted in state history. While recognizing the punishments were unjust, they are not absolute pardons. All seven men were said to have confessed to some involvement in the Jan. 8, 1949, attack in the 32-year-old woman.

Guilt was not contested in their appeals. Instead, famed civil rights lawyers of the time, Oliver Hill, Martin A. Martin, Spottswood W. Robinson and Roland D. Ealey and others used the state's stark execution record to argue unsuccessfully on appeal that the death penalty for rape was applied in a discriminatory manner, reserved largely if not entirely for Blacks.

Among the organizers pushing for pardons were Liz Ryan and Pamela Hairston and groups such as The Martinsville Seven Initiative Inc., the Free Minds Book Club and Writing Workshop, law students and graduates from the William & Mary Law School. 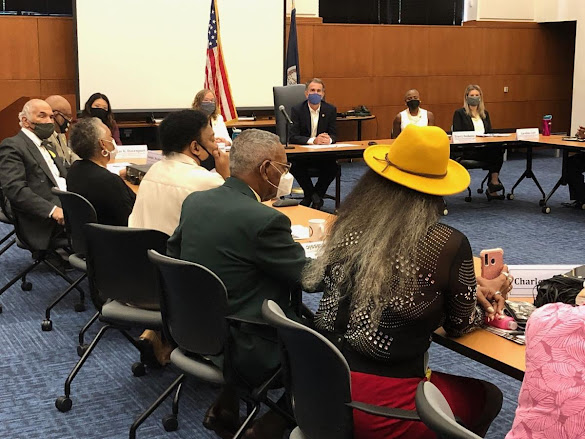 Above, the families were invited to meet with Northam Tuesday, August 31st, presumably to make their case for a pardon in person. Instead they got a welcome surprise.

After the executions of the Martinsville Seven, three more men, all Black, died in the electric chair for rape, the last in 1961. In 1977 the U.S. Supreme Court ended rape as a death-eligible crime.

"This is about righting wrongs," said Northam in a prepared statement. "We all deserve a criminal justice system that is fair, equal, and gets it right—no matter who you are or what you look like. I’m grateful to the advocates and families of the Martinsville Seven for their dedication and perseverance. While we can’t change the past, I hope today’s action brings them some small measure of peace."

Posted by douglassriverview at 1:26 PM

This story appeared in the Kingsport Times-News, August 5, 2021 by Calvin Sneed.  Story and pictures copyrighted. 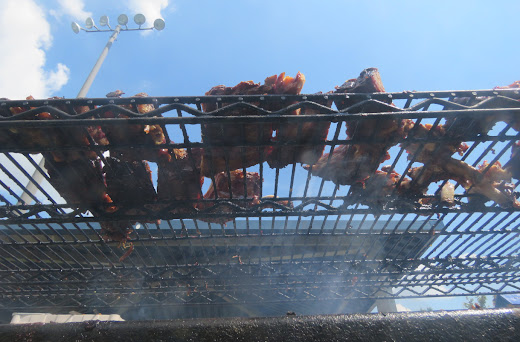 With school starting back up in Kingsport, the letter 'F' won't look bad on a community report card right now.  That's because this coming Saturday, it will stand for 'F'riendship, 'F'amily, 'F'un, 'F'ellowship and 'F'ood. 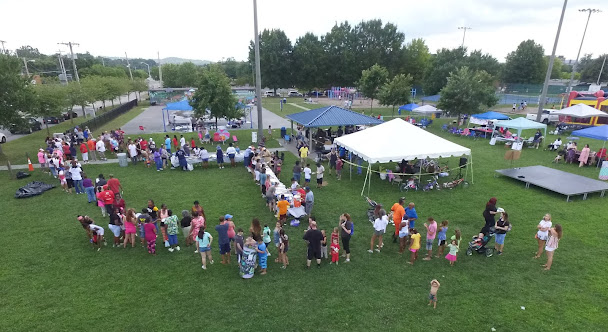 The 5th annual Community Cookoff Cookout is being held at the V.O. Dobbins Community Center on Saturday, August 7, 2021 from 4 PM to 10 PM in the ballfield on MLK Drive at Louis Street.  That's right beside the Riverview Splash Pad. 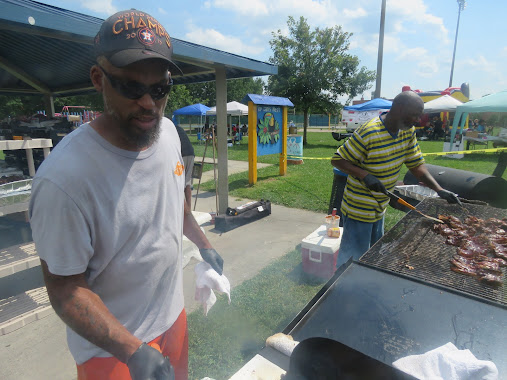 "It's the last big outdoor community bash of the summer," says organizer Ryan Smith.  "We do this every year because most of us were raised with lots of neighborhood cookouts during the summer and we all ended up eating a little bit at each house just about every day.  We were already used to everybody else's cooking, then school started back up and we were back to eating at home.  On Saturday, we'll give you that last community taste of summer once again." 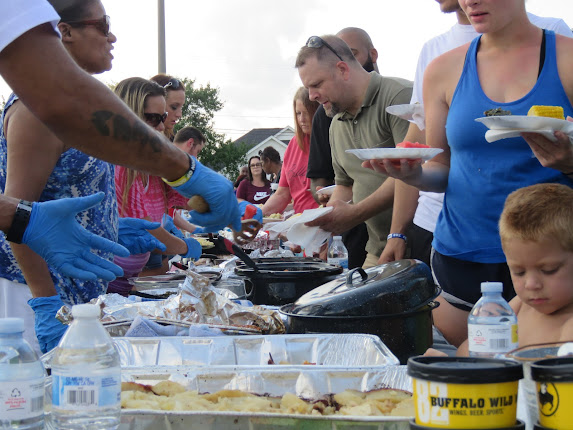 This year's Community Cookoff Cookout begins by commemorating August 8th, the historic celebration of Emancipation Day in Tennessee during which President Andrew Johnson freed his personal slaves 158 years ago.
After cancellation last year because of COVID-19, the theme for this year's cookout is an all-out tribute to the Riverview food legends that many folks grew up with.  "We'll have fried baloney sandwiches, mild pepper hamburgers and fried potatoes with onions just like Rev. (Curtis 'C.E.') Edge used to make at 'Edge's Place,' says Smith (Edge's Place was a popular neighborhood eatery on Lincoln Street). 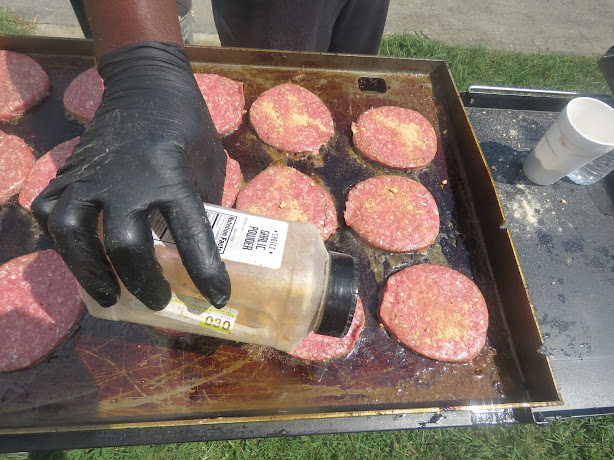 "More recently, 'Sarge's Place' was also a favorite restaurant because of Army veteran Master Sgt. James 'Sarge' Swafford's Jeep burgers and Tank burgers," he says.  "I'm going to make that 'love dust' special sauce invented by Rev. Edge that he passed down to Sarge to use in his restaurant.  Then, there was the barbeque chicken and ribs on the backyard grills of many homes in the community on weekends.  And we haven't forgotten the fried fish... years later, whiting fish is still one of the most-liked types of fish around.. we'll also have plenty of that," Smith says. 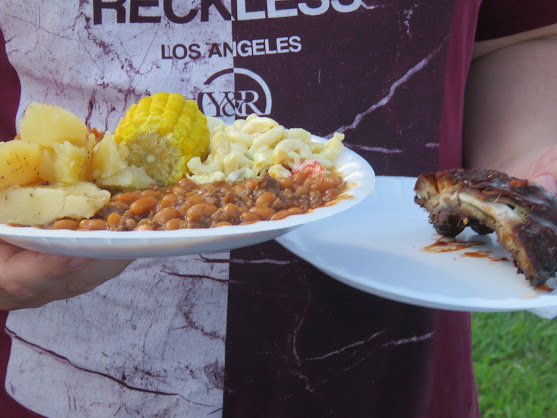 Baked beans will also be served, along with other items like salad, mac-n-cheese, cowboy beans, corn on the cob, and three different kinds of potatoes, mashed, fried and chips.
Two years ago for the Cookout, Smith says his team prepared more than 700 hamburgers, wings and hotdogs.  This year for the hundreds of people expected, it's no different.
"Come hungry," he laughs. 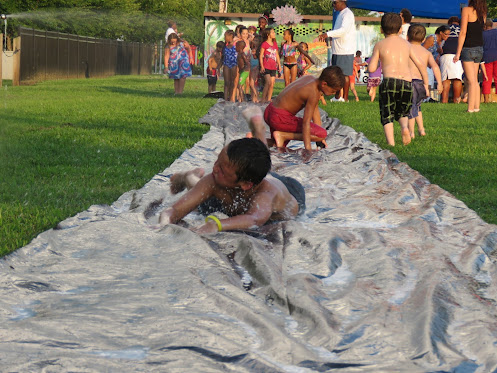 Among the games, door prizes, bike giveaways, free haircuts for the boys and hair styling for the girls, plus the DJ music in the ballfield, the Cookout also features an attraction for the kids from three years ago that nobody expected would become popular.  It's a homemade 100-foot water slide, an idea that Smith had seen on social media. 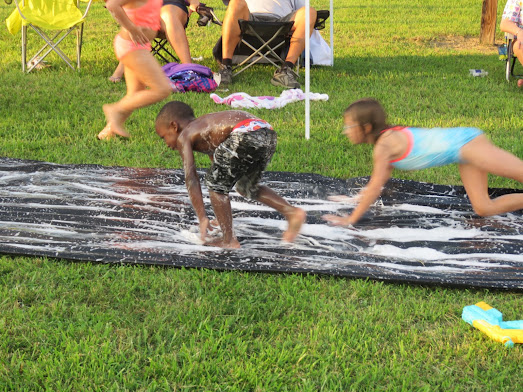 "Two years ago, all we needed was some baby oil, water and a roll of plastic that we stretched out," he says.  "Before we knew it, children were running and sliding on it, there were soap suds all over the place and the kids loved it.  We knew we had something going when all the children from the nearby Splash Pad came over and started sliding.  Once they figured out how it worked, there was no stopping them.  We had no idea we would empty out the Splash Pad with something we just made ourselves.  It was an instant hit, so we're bringing it back for the children." 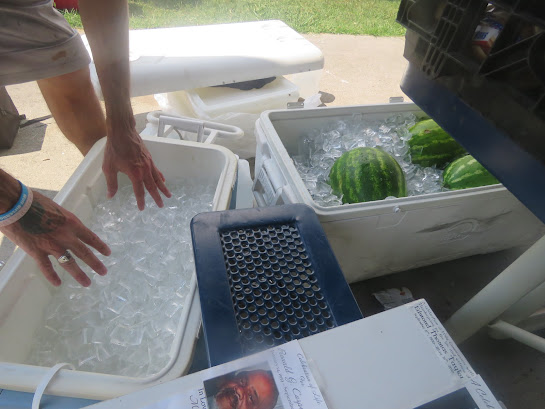 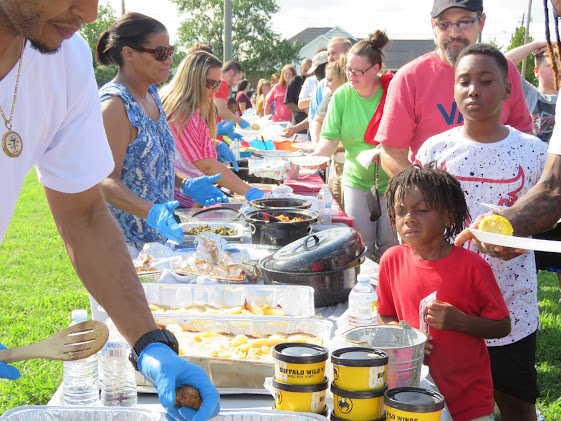 While last year's cookout was postponed because of COVID-19 and from the phone calls and emails he's been getting, Smith says Kingsporters are anxious to get together and celebrate the end of summer before school kicks back into high gear.
"It won't be long until everybody is forced back inside by the cold weather," he says. "COVID kept us away last year, and we're coming back to continue what's become an annual tradition in the city." 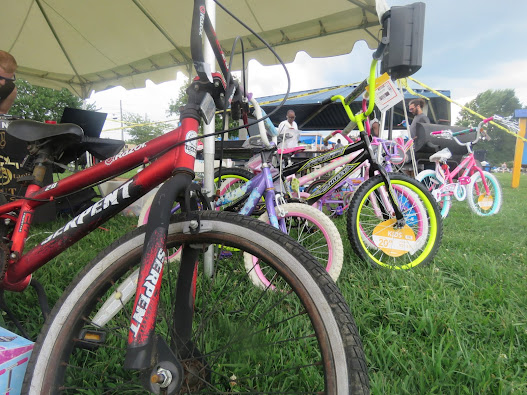 By the way, add one more word to friendship, family, fun, fellowship and food on Saturday.
'F'ree.  The Community Cookoff Cookout is free.  The food, the activities... everything on site is free of charge.
"Everybody is invited to come out to the party for Summer 2021's last big bash," says Smith.
Posted by douglassriverview at 12:49 PM 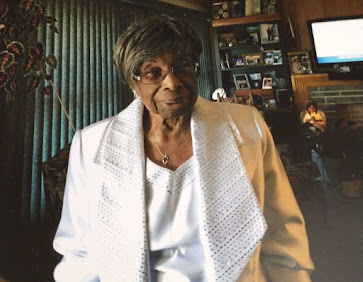 The children of Mrs. Icey Belle Jones are sponsoring their mother's 98th birthday on Saturday, August 7th, 2021 with a BBQ Luncheon from 12 Noon to 3 PM.

This is a family-only celebration taking place at the V.O. Dobbins Community Center, 301 Louis Street, Kingsport, TN.  In addition to her children, there will grandchildren, great-grandchildren and great-great grandchildren. 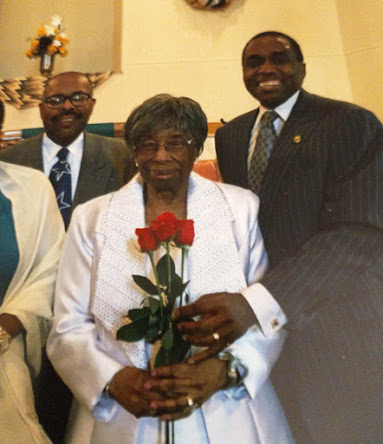 In addition to the family luncheon, the family is inviting her home church, the Shiloh Baptist Church and the community-at-large to participate in a drive-by greeting, through the parking lot from 3 PM to 4 PM on the back side of V.O. Dobbins that faces Wheatley Street.

The drive-by will be led by her daughter Clara Lewis, who will distribute gifts of appreciation while they last.

Posted by douglassriverview at 12:32 PM