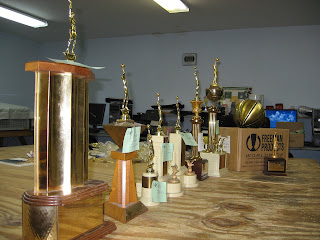 PHOTOS WITH THIS STORY ARE IN THE PHOTO GALLERY


It's my pleasure to report that the Douglass athletic trophies that were accidently broken during their 40-year storage at Dobyns-Bennett are now all repaired.
Pete Williams at Varsity Trophies in Kingsport did a great job repairing and restoring the broken trophies.. some were missing arms, some were missing basketballs, others were missing face plates and entire statutes, and even others had severely damaged bases. Mr. Williams replaced what could be replaced, fixed what could be fixed, and in some cases, he completely rebuilt trophies into new ones that we can all be proud of.
Our thanks to Kingsport City School Board Member Wally Boyd, who authorized the repair and the return of all of the Douglass trophies stored at Dobyns-Bennett to the Douglass Alumni Association.. Also, thanks to Dobyns-Bennett Assistant Principal Mike Fulkerson, who helped round up all the Douglass trophies in storage (and is on the lookout for others that might still be in storage at D-B).. Pete Williams, whose care and patience resulted in beautiful statutes restored to their original glory, and also Douglass Alumni Past President Douglass Releford, who helped organize the return of the trophies, and who helped me coordinate that return this year.
All of the Douglass trophies will be on display at the upcoming reunion, first at Field Day June 30th, beginning at 11:30 at the Douglass Ball Field, and later that night at the Douglass Banquet at 7 PM at the Meadowview Convention Center. This will be your last chance to see them before they go into careful, packing-crate storage with bubble wrap at regulated temperatures, awaiting their new home, hopefully a new, modern trophy case in an old familiar home.. the soon-to-be-renovated Douglass High School building. More on that to come!
Posted by douglassriverview at 10:50 PM