A somber mood at the board meeting of the Sons and Daughters of Douglass Alumni, turned to immediate sadness. 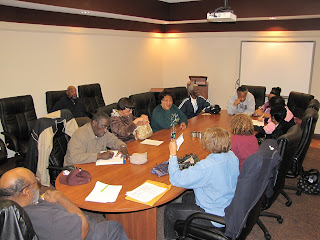 Board President Virginia "Jenny" Hankins resigned from the board, via a handwritten note that was read aloud at the meeting on Saturday, February 23rd.

In the note, Hankins says she had wanted to "follow in the footsteps of Doug, Louetta, Kathryn and others to carry the organization forward, but my failing health will not allow it."

The note immediately had board members wiping away tears.

In an interview this week, Hankins says, she really didn't want to be forced to quit, and the realization of that decision, was out of her hands.

"The alumni and the association are close to my heart," she said tearfully.  "I didn't want to have to quit, but I've been putting it off for about a year." 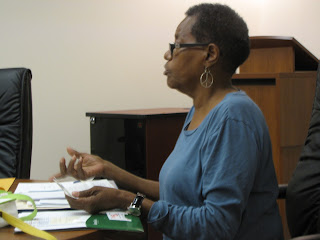 Hankins also revealed for the first time that she now has liver cancer, which developed from the colon cancer she has suffered with for the past several years.

"Since the doctors told me that, all I've been able to do is just lay around," she said.  "I've got some other stuff going on.  I took a CAT scan last week to find out what's going on there."

Jenny's spirits were lifted greatly, at the news that the entire board will continue to seek her advice for
guidance, and even happier that the board prayed for her a couple of times during the meeting Saturday. "I really appreciate that," she said. 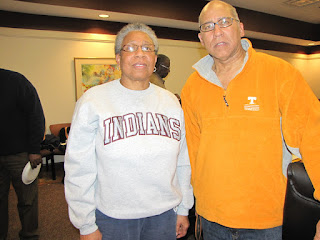 As mandated by the charter of the Sons and Daughters of Douglass non-profit corporation, Board Vice President Andra "Puddin" Watterson was elevated to the position of interim president until the Douglass alumni gathers in July to select new executive board members.  The board also elected permanent board member Calvin Sneed to serve as interim Vice President, until July as well.

"I'm hoping everybody will hang in there and help Andra out," Jenny said. "She's gonna need help, so please.. just everybody step in and help her and do their part.  I believe everything will work out, because Andra's a worker.. she puts 100 per cent into what she does.  It's a big responsibility.  I want everybody to please help her out."

"We're trying to do what we can and we need the efforts of each alumni member Calvin," says Andra.  "I'm proud to be a alumnus of Douglass High School and I know every alumnus is.  We're all graduates of Douglass in some form, and everything we do, is for the alumni, the descendants, and the people of Riverview."

Andra acknowledged the financial dire straits that the Sons and Daughters of Douglass organization is in right now.

"At any given time, any of our alumni, friends and neighbors and feel free to donate money to us, just give us a contribution as a former classmate of Douglass," she says. "The way other alumni organizations work, is any alumnus has a moral obligation to help support the alumni association through dues, which for our organization is only $25.00 a year."

"Just like the other alumni groups in the area, if all of our Douglass alumni would send us the money for their dues, it would easier for us to sustain ourselves as an organization," says Andra.

To the Douglass alumni, she implored, "Please don't forget about us."

Posted by douglassriverview at 8:12 PM