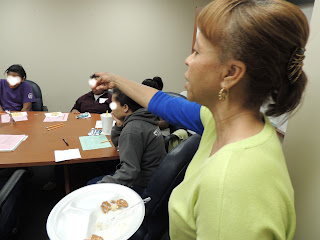 Young African-American girls in Kingsport's schools only have two ways to act in society..

The right way and the wrong way.

"We're trying to reach the girls at a very young age, 6th, 7th and 8th grades," says chapter member Gerry Harrison.  "This is when they really start to blossom and get into society and make decisions.  We're trying to work with them to develop good leadership skills and characteristics, and build up their self-esteem.  We want them to know what they should be about at this particular age, so when they get to high school and go to college, they will be the ladies that we can be proud of."

"One of the exercises the girls worked on this particular time, was relationships, good ones and bad ones," says Mrs. Harrison.  "The girls themselves came up with the topic "Boy Drama," probably because that's what they're facing right now, and they're wanting some advice on how to deal with it, especially if it involves another girl making eyes at their boyfriend.." 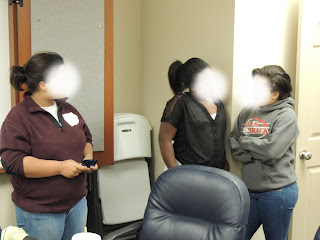 For the skits the six girls would perform, they were divided into two groups, the "rightees" (this group would deal with the "other girl" problem the RIGHT way), and the "wrongees" (they would handle the same situation the wrong way and would suffer the consequences of their wrong decision).

Here's the confrontation the "rightees" practiced: 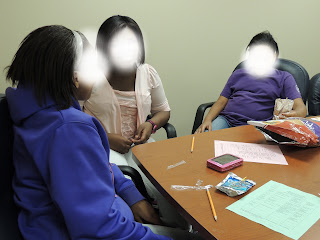 Of course, no real blows were exchanged, but the girls got the chance to see both scenarios, and practice the right way to handle the situation.  For the record, all six girls say, none of them have experienced this situation.

"Being a 'wrongee' is not go to yourself or other people," says one of the "rightee" participants.  "What's bad is what you end up saying to other people.  If I found myself in that situation, I would probably walk away from it, and not get involved.  I might say something, that I don't want to say to my friend."

One of the "wrongee" participants says, some of her friends have indeed been in that scenario, and she's seen it first-hand.  "I think it's really dumb to fight in a situation like that over a boy," she says. 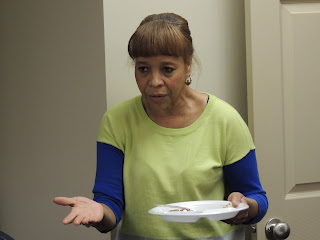 "You don't go and beat the girl up," says Mrs. Harrison.  "We emphasize that.  Most of the time, the girl will go after the other girl, and you say nothing to the boy?  He caused it.  The first thing you gotta do is make sure your relationship with the boy is on the up and up.  What would make him do that?  Then, calmly go talk to the girl.  You gotta talk it out.  Don't go in mad, don't go in furious, and for goodness sake, don't go to another friend and talk bad about the friend you are accusing.  It will just get deeper and deeper."

"Remember.. the boys love to have girls fight over them, to the point of encouraging it sometimes."

The girls were also warned of the dangers of texting about bad situations. 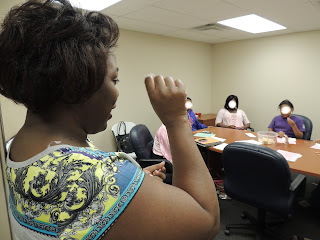 "A message you send to a friend, may get sent to another close friend who sends it on," Mrs. Harrison says.  "Before you know it, your business is all over the school that you said "X, Y and Z" to sombody.  Same thing goes with pictures.  Don't text shady pictures to your boyfriend.  You don't know that he won't share it with a friend of his, who shares it with a friend of both of them, who passes it on.  Don't do it, even if the boy wants you to.. it'll be all over the internet before you know it."


All the girls loved the exercise, albeit, an exercise in tolerance.

"The Alpha Kappa Alpha sorority has had this program in larger cities," says Mrs. Harrison, "and we decided that our girls needed the help with those choices, too."


Posted by douglassriverview at 1:32 AM