Kingsport’s Brickyard Park on track for opening in early April 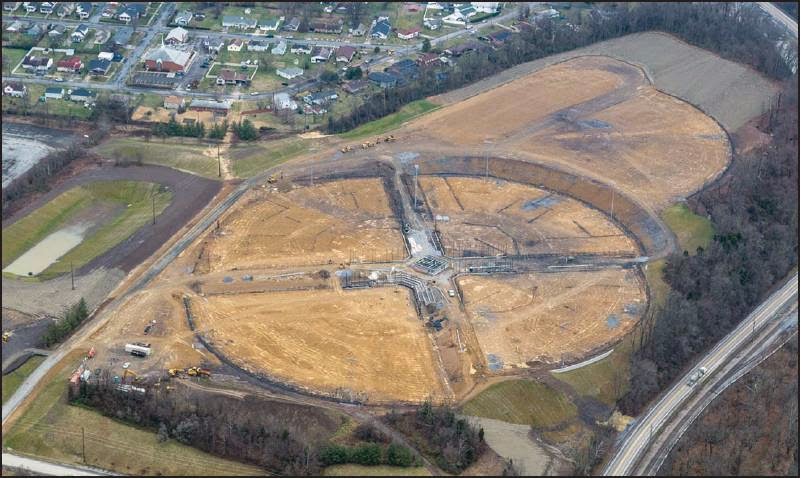 KINGSPORT — Work on Brickyard Park — Kingsport’s newest softball and baseball complex — is moving at a strong and steady pace, and how the facility looks now compared to before Christmas is like “night and day,” city officials said recently.
However, even with construction moving along, the deadline for completion is coming up fast and basically hinges on what type of weather comes out of February.
“If February’s weather is like January’s appears to be, we’re pretty good,” said Chris McCartt, assistant city manager for administration. “If February decides to be the worst month thus far, it has the potential to really set us back. It’s just unknown.”
The contractors on the project — Denark Construction — plan to turn over the facility to the city on April 1, but will likely remain on site another 30 days to finish up with “punch list” items. The first tournament on the new fields is scheduled for the first weekend in April — the Eastman Invitational.
“Even if we’re pushed back to March 1 to get the sod down, we still have a really good shot of being okay,” Mc-Cartt said.
Brickyard Park is located on a portion of the old General Shale property along Industry Drive and is a re-

placement for the now gone Eastman ballfields on Wilcox Drive. When Eastman announced its $1.6 billion

“Project Inspire” reinvestment plan in 2013, the plan called for a new corporate office building on the site of the

company’s ballfields.
As a result, Eastman asked Kingsport if it would build a suitable replacement complex and absorb the Eastman ball leagues into its programming.
Brickyard Park will have four ballfields in a wagon-wheel design, with a centrally located two-story building for scoring, concessions and restrooms. Plans call for 245 parking spaces with room to add an additional 78 if necessary.
Two of the ballfields will be approximately 325 feet. One will be a 350-foot championship field with terrace seating, and a fourth field will be 300 feet. Grading has been done for a future, fifth field.
“We created a tiered site. The parking and future fifth field is on one elevation, below that are three fields and then one field slightly lower,” McCartt said. “The reason why it was done was to be as efficient as possible with the site we had to work with and avoid any additional cost. There’s been a tremendous amount of fill and grading to get us to this point.”

David Mason, Kingsport’s construction manager for the project, gave an update on the progress of the work taking place on the site, saying all of the light poles are up and the electrical work remains to connect them; all fence posts and back stop posts are up, the scoreboard columns are in place and all irrigation lines are in and Denark is working on testing those lines.
The concession building is standing and is dried in, but has not been dry-walled or painted. Mason said crews will start on the final roofing work soon. Top soil for the fields is coming in and crews will start spreading it soon, Mason said.
All of the fields are going to be skinned to allow for diversity of play, McCartt said.
“(Brickyard Park) gives us a different view of downtown Kingsport than most people have ever seen,” McCartt said. “This property has been an industrial site for the entire history of Kingsport, and with the exception of when Cement Hill had houses on it, this view has not been open to the public. It’s pretty dynamic, with Bays Mountain, old Kingsport and new Kingsport downtown.”
The total cost of construction is $6.9 million, with an additional $380,000 for the price of the land.
Posted by douglassriverview at 9:03 AM