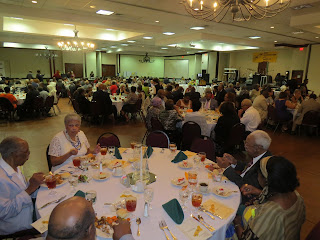 But this weekend's Great Golden Gathering, gathered nearly 200 alumni from 15 African-American schools across Northeast Tennessee and Southwest Virginia in a mass of hugs and laughter.

Calvin Sneed, the event’s chairman, guided the idea for a mega-reunion in less than a year. While some of the schools have their own reunions, this is the first reunion encompassing all of the region’s African-American schools.
He said he couldn’t have been happier with the turnout.
“It takes your breath away,” Sneed said. “I’ve seen reunions that haven’t taken place in 50 years between schools. People who they thought they’d never see again and everyone goes their separate ways after the schools close, and I’ve seen those reunions. It’s just been so heartwarming — this is what we wanted to do.” 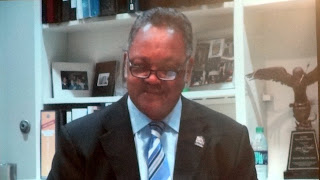 One of the planned guest speakers included civil rights activist Rev. Jesse Jackson, who canceled his appearance earlier this week due to his mother being in the hospital. That didn’t stop him from sending his best to the reunion, though. Jackson sent a several-minute video clip to Sneed, who kept it a surprise until showing the clip after the banquet Saturday evening.
“I just can’t believe that with his mother on life support, that he would do this for us,” Sneed said.
The reunion was open to anyone who attended an all-black school before the end of segregation closed those schools.
Attendees ranged in age from those in their early 50s to some who were in their 90s, but all remembered the civil rights era and the struggle for civil rights.
While some of the alumni only had to drive down the interstate for the reunion, others, like Margaret Alexander, trekked from other states in order to spend the weekend with former classmates and old friends.
Alexander attended Douglass School in Bristol, Va., for 11 years, and graduated from Virginia High School after desegregation. She went on to be one of the first black women to work for the Federal Bureau of Investigation.
Alexander now lives in Maryland with her husband, but took the weekend to come back to Bristol for the reunion.
“It’s been lovely seeing friends,” she said. “It’s a joy and a thrill to see the other schools and their memories and their thoughts and to laugh and to joke with them. It’s always good to come home to see what’s left of our heritage.”
Sneed said that this reunion would make to be a historic event, and that amid the fun and clamor of the reunion, ideas for a repeat reunion began to flourish among attendants.
And with a board meeting creeping up after the Great Golden Gathering’s close, that idea isn’t far-fetched. Sneed said the board would discuss making the reunion a biennial event for classmates of former African-American schools.
“Our numbers are deteriorating and we don’t want to not be able to see each other,” Sneed said. “There’s going to come a time when we want to see one another and we can’t. That’s why we’ve got to do it as much as possible and we’ve got to enjoy each other, because tomorrow’s not promised.” 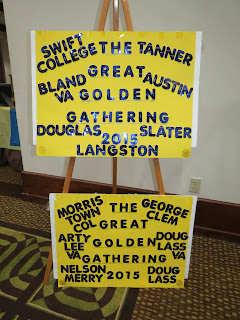 PLEASE SEE THE VIDEOS AND PICTURES FROM THE EVENT IN THE NEXT STORY
Posted by douglassriverview at 8:38 PM