Chattanooga And HOPE VI: Back From The Brink 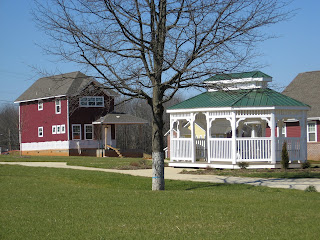 Years ago, the Spencer McCallie Homes complex in the Alton Park neighborhood of Chattanooga was indeed complex. Most African-Americans who lived there havebeen there for generations, gripped in the throes of poverty on government assistance and working just enough to break even. Crime and drugs were rampant, and even with police patrols, the area seemingly had no promise and no future.

And then, HOPE VI came to town.

"HOPE VI has turned the Alton Park neighborhood completely around," says Bob Dull, director of the Chattanooga Housing Authority. "It has given people hope, where there was none before." A HOPE VI grant provided the first phase of physical improvements in the area by temporarily relocating the residents of McCallie Homes' 6,000 units, then completely tearing down the apartments, known by slang as "the projects." "Many of the folks took advantage of the housing choice voucher program," says Mr. Dull. "Those vouchers allowed them to moved back into newly built single-family and multi-family homes with front lawns and backyards on individual lots. A lot of residents chose not to come back, because, after relocation they had settled into a different kind of lifestyle than they were living before."

"The residents that came back, came back to a brand new neighborhood of nice homes, neatly manicured yards, and the drug dealers have gone some place else," Mr. Dull says. "Every resident has a reason to be proud of that accomplishment," he says. Once a HOPE VI revitilization plan is approved bythe U.S. Department of Housing and Urban Development (HUD), the host city has a minimum of four years to complete the program, and certain deadlines have to be met for continued federal funding. Mr. Dull says Chattanooga only missed a couple of milestone dates that he says, relates to the funding of infrastructure (apartment demolition, updated water and sewer lines, burying powerlines underground, etc.).
"As a result of our everyday forward progress, Chattanooga is considered in the top five per cent of the HOPE VI Revitilization program," says Mr. Dull. "The revitilization of Spencer McCallie Homes is one of HUD's most successfully done programs in the country, and we are extremely proud of that."

Money from HOPE VI is also being used for another project near downtown Chattanooga in another government-subsidized housing project. It's hoped the old James High School building can be renovated, and turned into a community showplace. "We'd like to use a HOPE VI grant for upgrading the building and renovating it into an extension of Chattanooga State, restore some child care programs through Hamilton County Schools, add an extention of Wells Fargo, and add arts and drama programs through Chattanooga Parks and Recreation," says Mr. Dull.

"We are closely monitoring the same type of program that's currently being considered for the old Douglass School in Kingsport, Tennessee that you told me about," he says. "I am aware of the community spirit that supports the renovation of that school, and we want to bring back the same school spirit that Douglass Alumni show for their school, here," he says. Mr. Dull says,ultimately, he and a group of Chattanooga movers and shakers will visit the Riverview Community in Kingsport to see for themselves the neighborhood support that revolves around the old school.

As Kingsport, Tennessee prepares for its HOPE VI Revitilization program in the Riverview neighborhood, Mr. Dull has some advice. For the administrators of the program, he says, "don't get boxed in by all the program regulations. Be sure and do your homework and start early.. there are lots of restrictions that come with government funds, and don't be afraid to make informed choices on what the money will be used for."

For the residents who'll come back from relocation to new homes and a new neighborhood lifestyle, he says "Congratulations. You've just made the first step towards America's dream."

TOMORROW: We'll visit the HOPE VI Revitilization Program in the Mechanicsville Neighborhood in Knoxville, Tennessee, and examine the problems and progress that Kingsport's Riverview Neighborhood can certainly anticipate, and definitely learn from.
Posted by douglassriverview at 7:58 PM