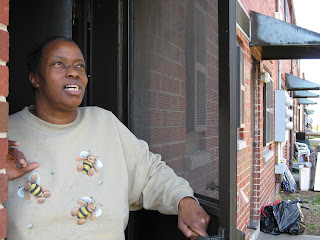 "At some point, I really wanted to own my own home," says Riverview Apartment resident Cecelia Rutledge. Ms. Rutledge moved to Kingsport from Hampton, Virginia nine years ago to be closer to her family, several members having lived for generations in Kingsport's oldest public housing unit. When she heard about the government grant program called HOPE VI, that offers home ownership as an alternative to renting, she, indeed, saw HOPE in the concept, but so far she says, she's still HOPING to get answers to her many questions about it.


"I'm the kind of person that usually asks a lot of questions," she says anxiously. "I'm sure my family here qualifies, and since we do, I would like to know when I'll be relocated. I have health issues that require letting the relatives know that are going to move me when I will need them."

"I need to know when to get ready to move," she says.

"We are trying to speed the process along," says Kingsport Housing and Redevelopment Authority Deputy Executive Director CeeGee McCord, "but at the same time, we don't want to make mistakes that would allow our residents to fall through the cracks." Last fall, the KHRA received notice that the City of Kingsport has been awarded a 12-million dollar grant to tear down the Riverview Apartments, which were built at the end of the Great Depression and just prior to WorldWar II, and replace them with single-family and multi-family homes the residents can purchase or rent through Section 8.

The first step in the process to sign up the Riverview Apartment residents that are interested in the program, then relocating them to nearby temporary housing, while the new homes are built, and finally moving them back. To help the process along, the KHRA asked that Regional Relocation Director Phillip Fortenberry of the Atlanta Housing and Urban Development (HUD) Office in Atlanta, come to Kingsport to answer residents' questions. "We are hoping to get started relocating residents as soon as Mr.Fortenberry can get back to Atlanta," says Ms. McCord. "Most of the problem is getting the right information on the relocation process out to residents, so the process will go smoothly."

She says, right now, there's no real timetable for the move to actually start. "Our big question to HUD is, 'if the residents are ready to move right now, can we go ahead and move them, even though the revitilization part of the funding process hasn't started yet," Ms. McCord says. "We know folks are anxious, but the government takes great pains to make sure there are no problems along the way." Ms. McCord says HOPE VI revitilization programs in Knoxville and Chattanooga were done on a much larger scale than Kingsport's, and as a result, "we hope to keep our Riverview program on a more intimate level. We know our residents pretty well, we are friends with them, and, although we can learn from those cities, we plan to keep our eyes on any problems Knoxville and Chattanooga had, that we MIGHT have, and attack them early on."

Ms. McCord urges all Riverview residents to speak up and ask questions either in person, or at the various community meetings the KHRA sponsors. The first few meetings held at the V.O. Dobbins Community Center were quickly moved to larger facilities at the Community Center, when more Riverview residents attended than expected. Central Baptist Church Pastor Dr. Anthony Daniels offered the use of the church's Fellowship Hall, when even more residents attended with questions.

"Right now, all I've got are questions," says resident Cecilia Rutledge, whose family only decided the day this reporter visited her, to try for the HOPE VI home ownership program instead of Section 8. "We are here to stay," she says. "We love this neighborhood, and we want to contribute to its success."
Posted by douglassriverview at 11:16 AM