The Cowboys took a step toward filling a hole in their secondary by agreeing to terms with safety Gerald Sensabaugh on a one-year deal Tuesday.

Sensabaugh, 25, started a career-high 13 games last season in Jacksonville and was credited with 82 tackles to go with four interceptions and four pass deflections. A fifth-round pick in 2005 by the Jaguars, Sensabaugh played in 50 games with 24 starts and had 168 tackles and six interceptions. 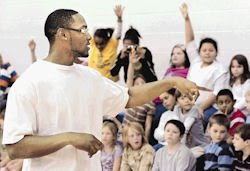 Gerald Sensabaugh fields question from kids at the Kingsport Boys and Girls Club during a recent visit. He was honored for his support of the organization. Photo by Ned Jilton II

Having cut Roy Williams and with Keith Davis testing the free-agent market, the Cowboys had a major need at secondary. Ken Hamlin has started the last 32 games at free safety but there was little depth behind him. Patrick Watkins is coming off reconstructive shoulder surgery and Courtney Brown and Tra Battle have little experience. The Cowboys also signed Jerome Carter in January.

Davis has visited Kansas City but could still return to the Cowboys because he plays a vital special teams' role.
Posted by douglassriverview at 3:53 PM