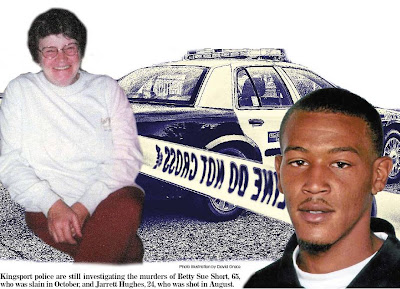 KINGSPORT — Though the holidays have passed and a new year has dawned, the families of two people murdered in Kingsport continue to be haunted by the nightmares of 2011: Their loved ones’ killers are out there, on the loose, and at any time could inflict the pain they feel upon others.

“I’m just going through the motions. I’m in survival mode,” said Robin Caldwell, whose mother, Betty Sue Short, 65, was found bludgeoned to death in her home last October. “I truly believe that all I’m going on are people’s thoughts and prayers.”

“Daily you ask why — what could someone have done to make one person take another’s life?” questions Monique Henry, five months after her brother, Jarrett Hughes, 24, was shot in his mother’s home by intruders.
“What’s done is done. We can’t bring my brother back. But we need (closure) for my mother,” said Henry.

Kingsport police say they continue to investigate the two cases on a daily basis, while family of the victims report receiving regular updates from detectives. Hughes was fatally shot on Aug. 3 in the Dale Street home of his mother — who was sleeping in another room — after two men burst through the back door.

On Oct. 16, Short’s body was discovered by her son inside her home at 361 Barnett Drive, Apartment 2. Police say there were no signs of forced entry into her residence — leading them to believe Short knew her attacker — and the murder was “extremely brutal.”

Detectives working each case say significant progress is being made. But they also believe individuals with potentially vital information have yet to come forward.

In the murder of Short, a toolbox containing two handguns and two collector knives was stolen from her residence. One knife is described as ivory bone in color and between 2 and 2½ inches in length. The second is a sheath knife, ivory bone in color.

Both were contained in individual, hardened white tubes, and police hope pawn shops or the general public may have bought or traded for the items. Kingsport Police Department Detective Randy Murray says those who may have acquired the objects second or thirdhand shouldn’t fear coming forward. Police aren’t focusing on individuals possessing the knives, but tracking down the killer who stole them.

He also put an emphasis on receiving information from residents of the numerous homes around Short’s apartment, which includes a large mobile home park. Even if you think your information is minute and mundane, or that someone has already told police what you have to share, investigators want to hear these insights.

Murray said his investigation is focusing on Short’s family and friends, with her family fully cooperating.

“Being a female, and her age, there’s a lot of public outcry, a lot of people upset,” Murray said.

Caldwell reiterates the pleas of police for more information from the public. Each time she is contacted by investigators, she hopes it’s the “hallelujah” call — delivering news that charges have been filed against a suspect.

“I have no doubt that my mother is in a better place. I just can’t fathom how somebody can take a life in their own hands,” Caldwell said.

“I’ve learned a lot during all this. It takes time, and I’m not a very patient person,” Caldwell added.

Patience is a quality echoed by the family of Hughes.

“I told the detective, ‘Just take your time,’ ” said Henry, Hughes’ sister. “I want them to dot every i and cross every t, so nothing can be thrown out (in court).”

Her heart continues to crave the daily phone calls and texts from her brother, each one closed with, “I love you.” Her son and daughter have been robbed of an unwavering supporter — their uncle in the stands every time they suited up for a basketball or football game, rooting them on.

But his presence is still felt.

“He’s always there, in the back of my head, telling me things,” said Henry.

“I don’t hate anyone — not even (the killers), because they obviously have issues they’re going through. I just don’t want it to happen to anyone else. It’s just too hard to lose a brother or a son unexpectedly. It’s hard for a person to bury their youngest child,” said Henry.

KPD Detective Cpl. Frank Light says robbery is believed to be the motive behind Hughes’ murder. When the men burst into the Dale Street home and killed Hughes, three other people were in the residence — his sleeping mother, Charlotte Erwin, and a male and female visitor of Hughes.

SUSPECTS 1 & 2 IN MURDER OF JARRETT HUGHES IN RIVERVIEW

After shooting Hughes, the two intruders are believed to have run from the home to a small red vehicle with front-end damage. One suspect is described as a black male between 25 and 28 years old, approximately 5 feet 8 inches tall, and more than 200 pounds with dreadlocks. The other is described as a black male between 5 feet 3 inches and 5 feet 5 inches tall, more than 100 pounds, with an afro.

“He may be gone, but he’ll never be forgotten,” Erwin said of her son. “He’ll be forever young.”

The community and Erwin’s church, Kingsport’s Powerful New Life Church of God in Christ, have collected money to establish a reward fund. Light said the $1,000 will be given to anyone who provides information leading to the arrest and conviction of those responsible for the murder.

Until that occurs, it’s the final words between mother and son that provide Erwin solace.

Anyone with information on the murder of Hughes or Short is urged to contact KPD detectives at 229-9429.
Posted by douglassriverview at 9:38 AM