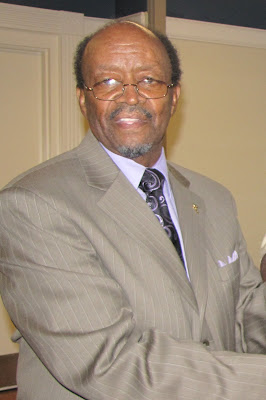 When Jack Pierce thinks of his good friend Bobby Joe Johnson, he can only think of the good times.

"I don't think I ever heard him get angry," Mr. Pierce says. "Nothing ever upset him.. you couldn't even make him mad about anything."

"Especially when we played football together." 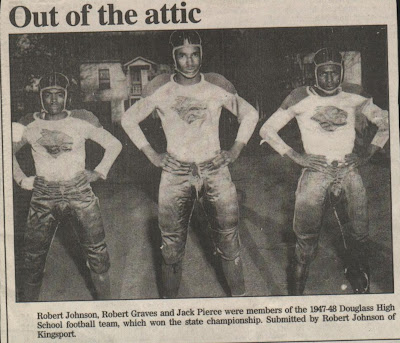 Jack Pierce and Bobby Joe Johnson played on the Douglass High School football team, that won the state championship in 1948. So did Nate Smith, Buddy Bond, Johnny Johnson and Bobby Graves. Not that many players from that championship team are with us now.

Including Bobby Joe Johnson. He passed away this week, and his passing leaves a void in the hearts of his teammates. 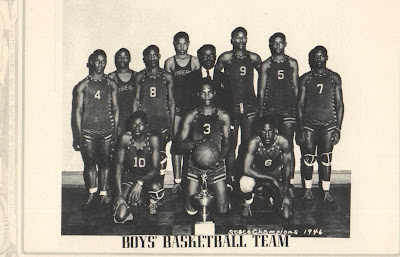 "We played basketball together for about a half-year," says Nate Smith. "Oh, he was a good player.. fast.. sneaky. He was a good ball handler, and what most people didn't know about his play, was that he didn't hog the ball.. he always shared it. He wasn't afraid to pass the basketball around, and if he saw you open in the lane, he'd pass it to you and expect you to score. That expectation was always there. He was a very smart player. He always waited to see who had the best chance to score." 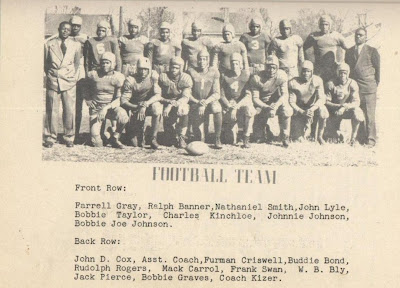 "I was a couple of grades ahead of him," Mr. Bond remembers. "He was just fast on his feet, running forward and zig-zaging. Nobody could do it better. Coach (C.C.) Kizer had us playing a double-quarterback system, a "double T" formation. It's where two men would line up behind the center, and the defenders never knew who was getting the ball. I was a better passer than Bobby Joe, but he was a better scrambler."

There's one football play during the championship game, that does not escape the gaze of the Douglass Tigers and their alumni. And it always provokes a grin, even outright laughter from people who remember it.

"It was the championship game.. we were playing Austin High School," says Mr. Bond, "and it came down to the very last play. Austin was ahead and their people thought they'd already won."

"What they didn't know was.. we had a secret weapon."

"It was just a regular pass, to the right, nothing spectacular," says Mr. Bond. "Just the last play of the game. Bobby Joe was well defended, and once the ball left my hand, I thought, 'well, this is it.. we win or lose the championship right here. I never saw what happened once the ball went down the field."

Bobby Joe caught the ball and skipped in for a touchdown. Bingo. Game over. The championship belonged to the Douglass Tigers.

Back then, it wasn't until Buddy Bond heard the other Douglass players laughing on that end of the field, that he realized that something had happened.

Bobby Joe bumped the defender, in fact, nudged him out of the way.

That left a short path open to the end zone. 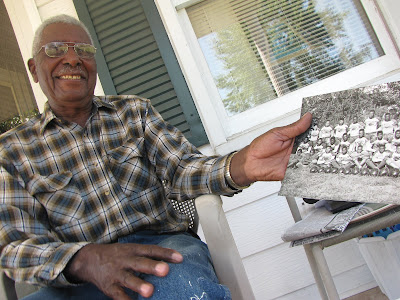 About this time during our interview, Jack Pierce started laughing.

"I was down on that end of the field," says Mr. Pierce. "The referee didn't see Bobby Joe bump the defender. Yeah, he sorta pushed off of him. I think there were players in the way and the ref never saw it. It wasn't a big bump, just a nudge. But had the ref seen that, he'd have called offensive pass interference and nullified the play. He just didn't see it. Instant replay would have done us in, but in 1946, we didn't even have television," he laughs.

Oh, the Douglass players saw the play.. and so did the Austin fans.

"We like to never got out of there," laughs Mr. Pierce. "We got on that bus and hunkered down, while the Austin people were banging on it and rocking it back and forth. We were praying that bus wouldn't tip over, you know." 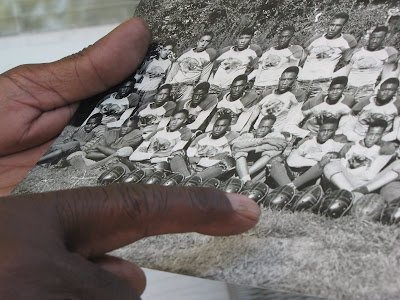 "Every time I have seen Bobby Joe in recent years, first we'd talk about the good ole days and who is still with us, and then talk would get around to football plays that we'd seen on TV lately. We always chuckled about the play that won Douglass the championship."

(To his credit, Bobby Joe never admitted to this reporter that he bumped the Austin defender. Whenever I'd press him on it, he'd poke me in the shoulder and say 'we won the game, didn't we?' and start grinning). 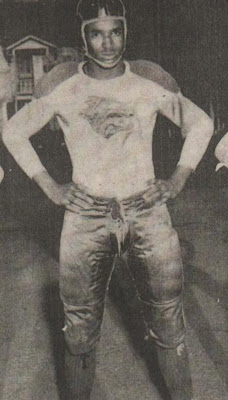 "I remember some of the other games, where we'd just drive it down the other team's throat," Mr. Pierce says. "Bobby Graves was the team workhorse. Whenever he'd get the ball from Bobby Joe, he'd struggle for yardage, just churning up the field. 3 yards here, 5 yards there with at least three defenders hanging on to him. Every once in a while, he'd shake 'em off and get 10 or 11 yards, but they were hard-fought yards, a lot of sweat."

Pretty soon, the Douglass Tigers would find themselves in the red zone.

"When we got down to the 5 or 10 yard line to the end zone," says Mr. Pierce, "quarterback Bobby Joe would call 'OK fellas.. quarterback 2." That meant he would carry it in. Bobby Graves wasn't having none of that. He'd go 'oh no, no. I'M making this play right here.' Bobby Joe wanted to get his name in the paper the next day, and Graves would say, 'no, no, no. I've carried it this far.. I'm taking it in.' Well, back then you just didn't argue with Bobby Graves. He was big and you did not want to mess with him. Bobby Joe would hand him the ball, and he'd lumber over the goal line, again with 2 or 3 defenders hanging on to him."

"We laughed about it after the games, because Bobby Joe didn't want to have to deal with Graves after the game, because it would stretch into practice the next week and on up to the next game." 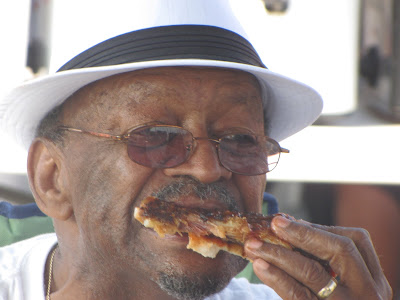 That was the biggest part of Bobby Joe Johnson's personality. He was always able to diffuse a situation and have you laughing about it. It was easy to laugh around him, and that's what everybody remembers about him.

"We were such good friends that one time back in the 50's when I was driving to Washington, DC, I asked Bobby Joe to go with me," says Jack Pierce. "Along the trip, my car broke down in Radford, Virginia on old Highway 11. I got it into one of those old filling stations, and I was in the garage talking to the mechanic about how much it would cost to fix it. Well... I got to missing Bobby Joe. Looked around, didn't see him. Went outside, and there he was, asking people when the next bus to Bristol and Kingsport was coming through."

"He just wasn't gonna help me pay for that car," Mr. Pierce chuckled. 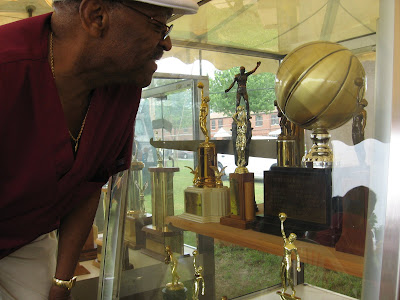 Even as Jack Pierce, Nate Smith, Buddy Bond, Johnny Johnson and Bobby Joe's relatives, friends and fellow alumni in the Riverview community gather to give him up to the Lord, everybody wants to remember the good ole times with him in Riverview. 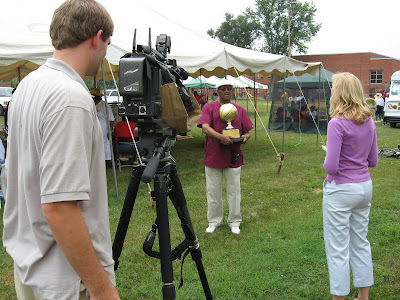 Bobby Joe Johnson always attended all of the community events if he could, and took part in many neighborhood activities... he was a regular fixture at the Douglass Reunions, and anything going at his home church of Bethel A.M.E. Zion. Bobby Joe never left the neighborhood where he grew up for long.

"I did visit him while he was sick a few weeks ago," Mr. Pierce says. "As usual, he wasn't complaining... in fact, he never complained around anybody. I never even heard him say a cuss word. He was never down on himself about anything." 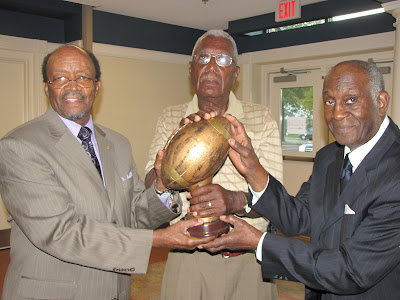 A 'happy-go-lucky guy' who just happened to help carry the heart and soul of Douglass High School in Kingsport to heights it had never been to before.

"He always did his best," all three of his former teammates said.

"That's what made him such a good friend, because his best is all anybody could ask of him."

BOBBY JOE JOHNSON PASSED AWAY THIS WEEK. HIS OBITUARY IS AT THE PASSINGS AND OBITUARIES LINK ON YOUR WEBSITE.
Posted by douglassriverview at 12:53 PM