A Community Locked In: Riverview and the Race

THE EASTMAN EXPLOSION, OCTOBER 4, 1960 AS SEEN FROM RIVERVIEW -- COURTESY THE KINGSPORT TIMES 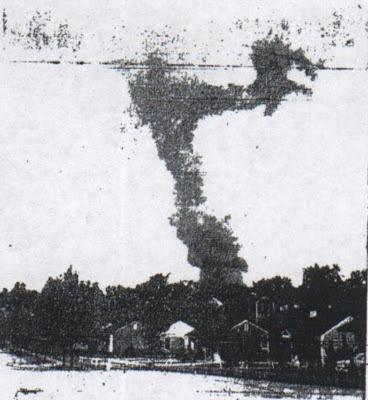 "We were totally caught off guard. There was no way out of Riverview."

No, this was not a remembrance of the Eastman explosion of 1960, during which emergency vehicles blocked the entrance to the Riverview neighborhood for several hours.

Fast forward almost 52 years to the day of that blockade, to where the entrances and exits from Kingsport's black community were once again restricted.

This time, it was for a foot race, not a chemical explosion.

On Saturday, October 27, 2012, both the M.L.K Drive-Wilcox Drive-Lincoln Street crossing and the Industry Drive-Wheatley Street intersection had barricades up, to allow racers in the Haunted Half Marathon and Boo-to-Brew 4-person Relay. At the M.L.K. crossing, a Kingsport city police officer with flashing blue lights stopped traffic to allow the runners to proceed through; meanwhile, a city public works employee with barricades did the same at Industry-Wheatley. The result was extremely long waits to get in and out of Riverview, for about 4 or 5 hours. 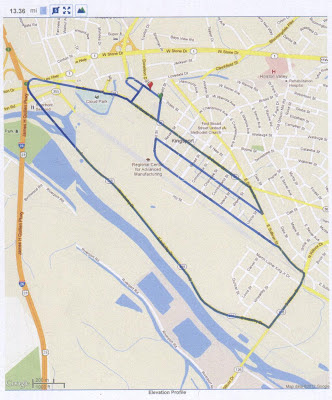 Check out the map on the right. It is of the race route. As you can see, it starts in downtown Kingsport at the Food City-Farmers Market parking lot, and after several switchbacks through downtown, the route finally gets to Wilcox Drive, then down and along Industry Drive to Netherland Inn Road and back over to West Center Street to its beginning point.

If you look down in the lower right corner, really close, you'll see... only one neighborhood in Kingsport is completely within the entire route, absolutely, totally inside the race perimeter.

That neighborhood is Riverview.

COMING OUT OF RIVERVIEW ON MLK, ENTERING WILCOX LEFT AND RIGHT, LINCOLN STREET STRAIGHT AHEAD 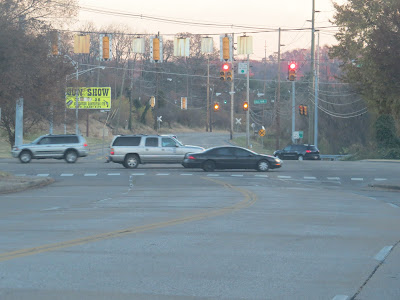 "There are only two ways to get in and out of Riverview, and our neighborhood was completely isolated," says Jeannie Hodges with the South Central Kingsport Community Development Corporation. "I don't want to think of what would have happened if there had been an emergency when seconds count. What if fire trucks had run up against the runners? Would they have stopped?" 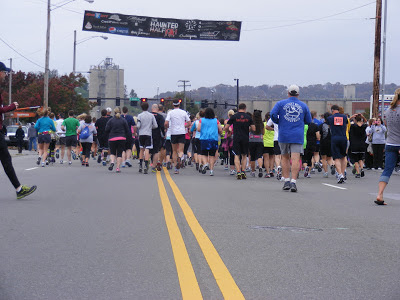 "With any course we run, police are instructed to let emergency vehicles have top priority by completely halting the race whereever the runners are," says Hank Brown, race organizer, who says his organization puts on at least 50 races all over the Tri-Cities and the surrounding area. "Police are told to absolutely let people come in or go out at prominent intersections, with the understanding there might be a delay while runners go through."

This writer experienced the delay firsthand.


While coming back from a photo shoot at Cleek's Corn Maze enroute back to the Central Baptist Church for its Fall Halloween Festival, I sat at the Lincoln-MLK-Wilcox intersection 10 minutes watching runners have the right-of-way along Wilcox. After 10 minutes, I gave up and had to take a circular route around downtown, up to Stone Drive, down to Fort Robinson, down to Netherland Inn Road, to Industry Drive to Wheatley. At Wheatley, I ran into more runners, plus the city worker and his barricade. I finally had to cut through the crowd of runners quickly and cut through the Johnson-Hilliard parking lot in a crowd of dust to get to Wheatley, while drawing a dirty look from the city worker.

My roundabout route around Riverview and downtown Kingsport added 15 minutes onto the 10 minutes I had already waited at the MLK-Wilcox-Lincoln Street intersection. 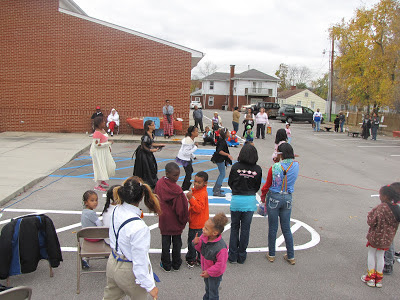 So what happened when I got to my destination inside Riverview?

At the Central Baptist Church where the Fall Festival was in full swing, organizer Jenece Williams was wondering why attendance at the event was down over last year.. there just didn't seem to be many children enjoying the fun and games, and not that many adults for that matter.

Her question about low attendance was answered, when one of her friends came up and told her that she couldn't drive into Riverview right away. 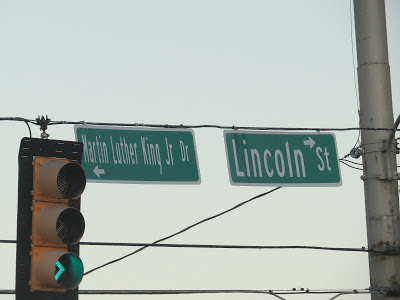 "She saw the runners at Wilcox and M.L.K. and motioned to the officer that she needed to get through. He told her that the entrance was blocked off, and she asked him 'well, how am I supposed to get through?' She said they went back and forth for a few minutes and so finally, she went up to the entrance to the Eastman parking lot, which is a private entrance, but goes through to Wheatley, and she cut through
right there. It was dangerous, but she did it."

"I realized there was an issue at that point." 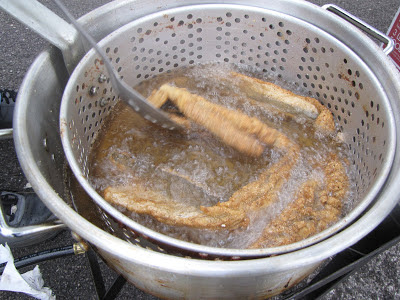 "It hurt us," she said. "For this kind of event, I normally buy 40 pounds of fish and 40 pounds of chicken to fry up to sell to visitors, so that the Youth Department can make money to fund field trips and special activities for the kids up to age 18. Because nobody could get into Riverview, we didn't make nearly as much as we needed to break even. We ended up taking a big loss because we didn't sell as much. We can't keep that much food in the church freezers, so we'll just have to fry it up and give it away soon. Having the roads blocked really hurt our event." 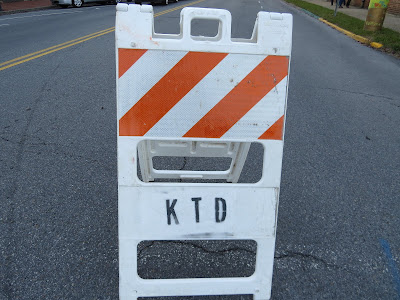 "I'm so sorry for that," Brown said, when told of the loss. "We don't want that, or any complaints. We'll be glad to work with anyone around town having issues or problems and see what we can do. We want to make our event better because it looks good for the city, but not at the expense of an entire neighborhood. We don't want to paralyze anybody."

When faced with the map that shows Riverview inside the race perimeter, and the only two ways to get in or out of the neighborhood, Brown said he recognized how people might have felt shut in.

MLK-WILCOX-LINCOLN STREET INTERSECTION, INDUSTRY-WHEATLEY INTERSECTION --- THE ONLY TWO WAYS IN OR OUT OF RIVERVIEW

"It was definitely a communications failure on our part," he says. "Police are told to let people in and out during the race, and apparently we didn't communicate that strongly enough. We don't want people to think they can't get into Riverview."

When asked if it were possible to include a couple of Riverview people on the course planning and organizing committee for next year's race, Brown thought that was a good idea.

"It will include the neighborhood in the process and keep us as race organizers mindful of the impact on the community. We can definitely get insights from the Riverview community, because we are indeed encircling their neighborhood. With the popularity of the race course, we can definitely work together with Riverview to help us do a better job of getting people in and out."

"I can promise you that." 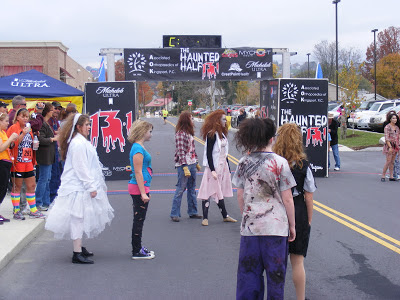 For Riverview folks either blocked in or kept out, that's one olive branch that will be accepted.

"I don't think anybody here in Riverview wants to keep the race from coming by," says Jeannie Hodges. "We just don't want it to keep us from doing the things we would normally do on a Saturday, like go to the grocery store, or go to the mall, or go visit somebody. Eastman doesn't block us out whenever they have their race, because there's at least one way out for us." 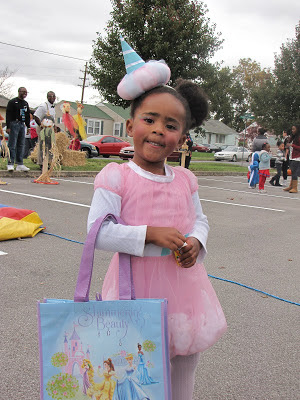 "Our little Fall Festival wasn't as big a deal as a race with thousands of participants in it," she says. "But I would ask the race organizers to just be mindful of our needs, too, since their race route completely surrounded Riverview," she says. "I mean, Kingsport is a city where we all work together, we work out issues."

"We and our little event are important, too."

Posted by douglassriverview at 2:02 AM