Two of Riverview's Finest Will Play Football for Tennessee 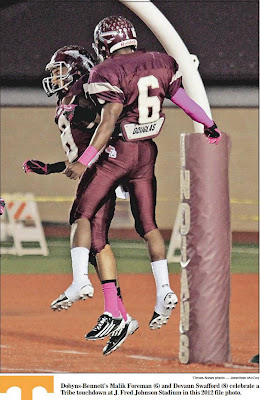 KINGSPORT — Dobyns-Bennett gridiron stars Malik Foreman and Devaun Swafford are elite all right — but now with a capital “T.” As in “T-E-N-N-E-S-S-E-E.”

On Friday, Foreman, the Times-News Northeast Tennessee Elite Player of the Year for 2012, and Swafford, a running back on this year’s Elite squad, committed to play for new coach Butch Jones at Tennessee. Foreman committed to Vanderbilt in late October, but the change of command in Knoxville brought with it a new opportunity. Jones, hired by UT on Dec. 7, has gone on the record with his commitment to keep instate players in state. He contacted the D-B duo and they made an unofficial visit to campus in the middle of December. Jones is a “great guy with a great attitude,” Swafford told the Times-News on Saturday night. UT offered Swafford a grayshirt opportunity, meaning he would go on full scholarship in January 2014. If an extra scholarship were to open up in the spring, Swafford said, he could get that.

“I’m going to enroll (at Tennessee) in August and practice with the team regardless,” he said.

UT is looking at the 5-foot-11, 180-pounder as a defensive back — and he knows the challenge he faces in the Southeastern Conference.

“I’ll have to get bigger and faster to play in the SEC,” said Swafford, who rushed for 29 touchdowns and more than 1,300 yards in 2012, also hauling in four TD passes.

Foreman, who will be a member of Tennessee’s Class of 2013, began the year as a wide receiver for the Tribe before an injury forced his move to quarterback. The Big 8 Conference player of the year then started nine games as D-B’s signal-caller, compiling more than 1,800 yards of offense while leading the Indians to the TSSAA Class 6A quarterfinals.

On the defensive side of the ball, Foreman had a Big 8-best six interceptions this past season, returning two for touchdowns. He recorded eight pass break-ups, forced seven fumbles and notched five tackles for loss.

Tennessee is looking at Foreman at defensive back or wide receiver.

CONGRATULATIONS TO OUR FINE YOUNG MEN-- EDITOR
Posted by douglassriverview at 11:30 AM