Below are picture slideshows from the Reunion, plus links to what could only be described as a "hot time in the ole town tonight," AKA the Sock Hop, held at Meadowview. Aside from that, all the pictures come from the staging areas at the V.O. Dobbins, Sr. Complex in Riverview.

Meeting was called to order by Andra Watterson, President

Minutes were read by Vicki Smith and motion was made by Doug to accept minutes as read. Sandra seconded the motion and motion carried.

Financial Report was given by Ozine Bly, Treasurer. The financial report is available upon request. Ozine stated that a total of 4 participants have been selected to receive a scholarship award in the amount of $500.00 each pending notification of acceptance letter.

Doug made a motion to accept the Treasurer’s report as read and Pam seconded the motion. Motion carried.

Question regarding financial report not being on website – members can request report at any time.

Email addresses are being obtained so that any information regarding dues, etc., may be sent to members.

Question regarding lifetime membership (which will be taken into consideration).

Doug reminded us that all tenants in the building have a Charter contract and that an agreement has been signed and this is a monthly expense.

Cassius & Pam Ruffin have offered to send a check for this service for the next 6 months (a total of $771.96).

Suggestion for an Event Coordinator (which is up for discussion at next mtg).

New Vision Youth purchased an auditorium seat for a total of $100.00 in memory of Lonnie Cox. 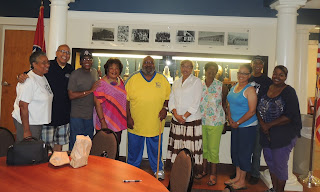 Correction to minutes on 8/22/2013
MEETING ADJOURNED

Posted by douglassriverview at 8:59 PM