Gents to Gentlemen: Princes of Personality 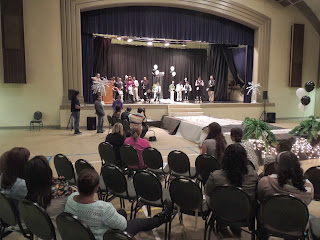 Kingsport's Princes of Personality have been crowned, and what a fine group of young men have been recognized!

The 2013 edition of the "Gents to Gentlemen Male Pageant" was held on Saturday, October 19 at the Kingsport Civic Auditorium. The event is sponsored by the New Vision Youth, Kingsport Parks and Recreation and the Taylor-Hamilton Insurance Agency.

Host of the event was B.T. Tarter, and music was provided by Witness.

Nobody was on the losing end this particular Saturday night.

Mr. Congeniality (all ages) is 7-year old is Preston Fullen.

Brothers Domingo Hale and Kimario Hale both won the Prettiest Legs Contest, voted on by the audience.

Finally, the People's Choice contestant, als voted on by the people in the audience is 6-year old Micah Hale.

Proceeds from the pageant benefit the Kingsport Literacy Council and the Sons and Daughters of Douglass Alumni Association, Inc.


Posted by douglassriverview at 6:09 PM