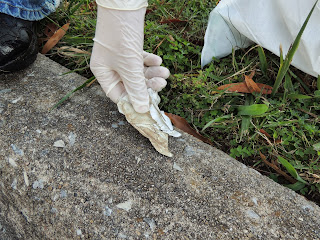 "It's good to see our community isn't as littered as it used to be."

Those words from a beaming Jeannie Hodges of event co-sponsor South Central Kingsport Community Development Corporation, as the annual Fall Clean-Up campaign in Riverview, netted only a few bags of trash and litter.  The total trash collection this time, was almost 2/3rd's less than it usually is.

"Usually when the trash collectors come back, they've got bags and bags full of litter and debris," she says.  "This time, they spent a lot less time out and that's a good thing.  We're down to about an hour, maybe 90 minutes of collection time."

Adding to the lesser amount of trash picked up, was the fact that not that many folks showed up to participate in the clean-up.  Back in the spring, 80 participants from the New Vision Youth to Kingsport Community Services came out to canvass the streets and alleys of Riverview.  This time, about 40 members of New Vision Youth were out, with only two from Community Services.

"I think even the kids were surprised that they didn't have to work as hard this time around," says Mrs. Hodges. 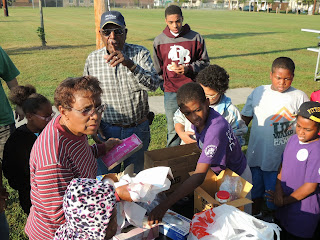 In previous years, the event was part of the nationwide Great American Clean-Up, but Mrs. Hodges says in recent months, there hasn't been much involvement from the national effort. She says, South Central Kingsport keeps it going as a service to the community.

Will there ever come a time when there is no trash to be picked up at all in Riverview?

"Wouldn't that be nice," Mrs. Hodges thought out loud.  "We probably won't ever reach that goal, but it's a good one to shoot for.

Meanwhile, the lack of trash allowed folks to show off their fall flowers.


"It shows that people really care about their community."

Posted by douglassriverview at 11:05 AM