The Oasis of Kingsport: An Island in the Sea of Confusion for Women 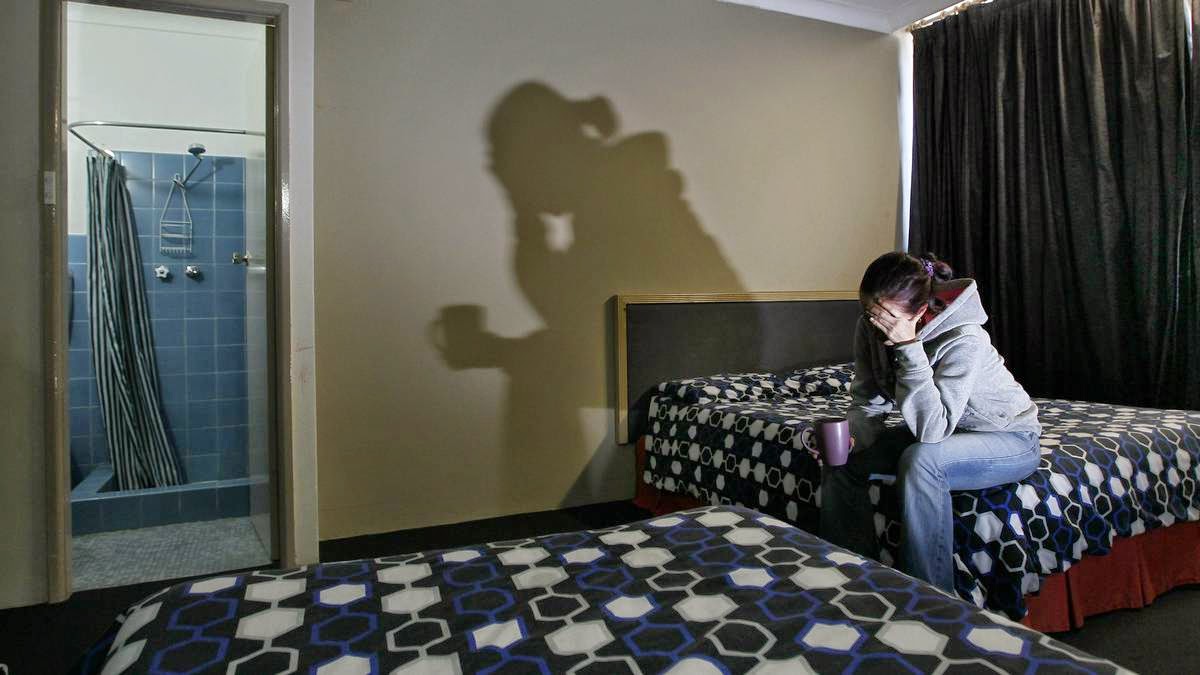 Many women face difficult times in our economic society.

Being single, trying to get back (and stay on) their feet is even more difficult.

That's where the Oasis of Kingsport comes in.

"We provide items that women can use, both physically, mentally and spiritually, that can help women to become self-sufficient," says Oasis director Kermit Addington. "Empowering women through love, laughter and laundry.. that's how we do it." 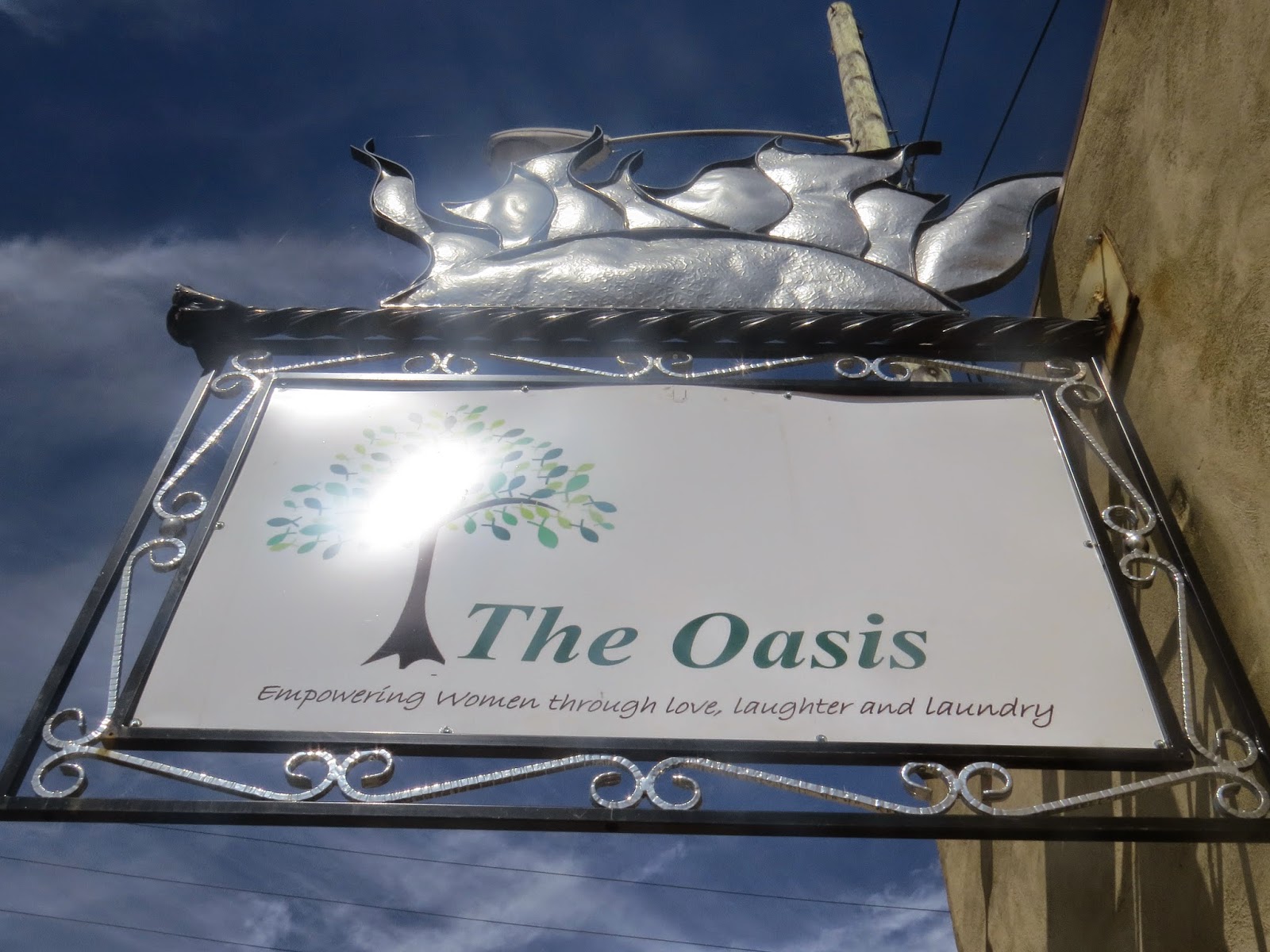 That's the motto of the Oasis of Kingsport, and it comes with a very good role model.

"Our services are patterned after the ones offered by 'The River' in Johnson City," Addington says. "They are an outreach of the First Presbyterian Church there. They've been in operation for 10 years, and I called the lady over there up and said 'I'd like to come over and see what you all are doing..we'd like to start something like that up here in Kingsport. She said 'well you can come over, but you can't come in. Men are not allowed in during regular organization hours.' She did let me come by later though, and I liked what I saw.  The women can't stay overnight, but the ministry is there for most of the day."

"At the time, Kingsport didn't have anything like it." 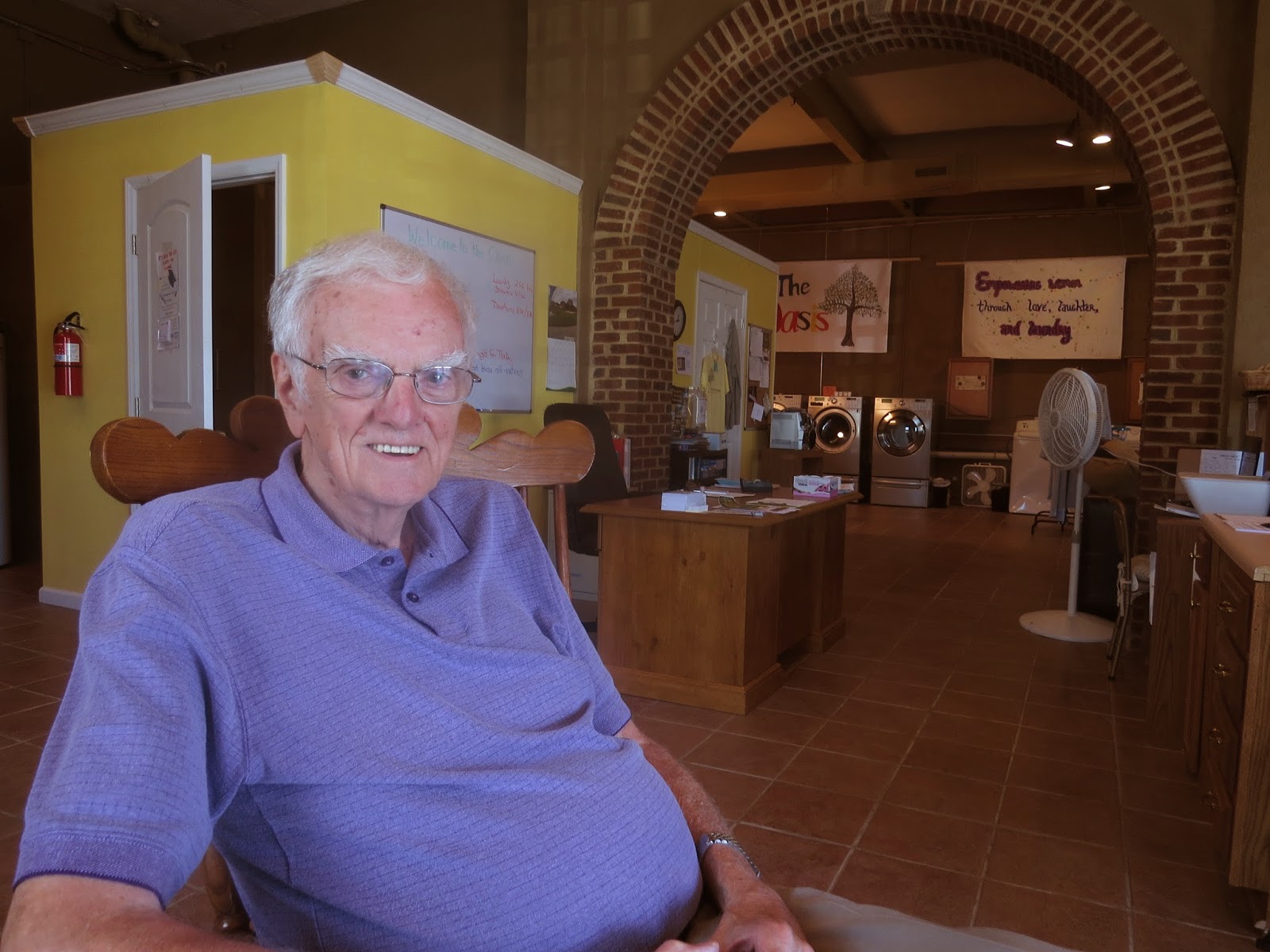 It took three years to get the idea off the ground in the Model City.

"Because of timing, I wasn't able to start the concept here in 2011," Addington remembers, "so in the meantime, I started the "Friends and Neighbors" program, the transitional housing problem. That kept me busy non-stop, but I always had a soft spot for the Oasis idea, and kept it in the back of my head. My daughter passed away a year ago, and I needed time to grieve. Right around the first of the year, I reminded myself that 'I'm getting old and I've still got one more thing to do."

"First one donation, then another," he added. "All of a sudden, we're off and running and moving along. On the first of April, we got the first stick of furniture, and on June 16th, we opened the doors. We quickly found out that this was the right time to start this ministry. Three years ago, it just wasn't a good time." 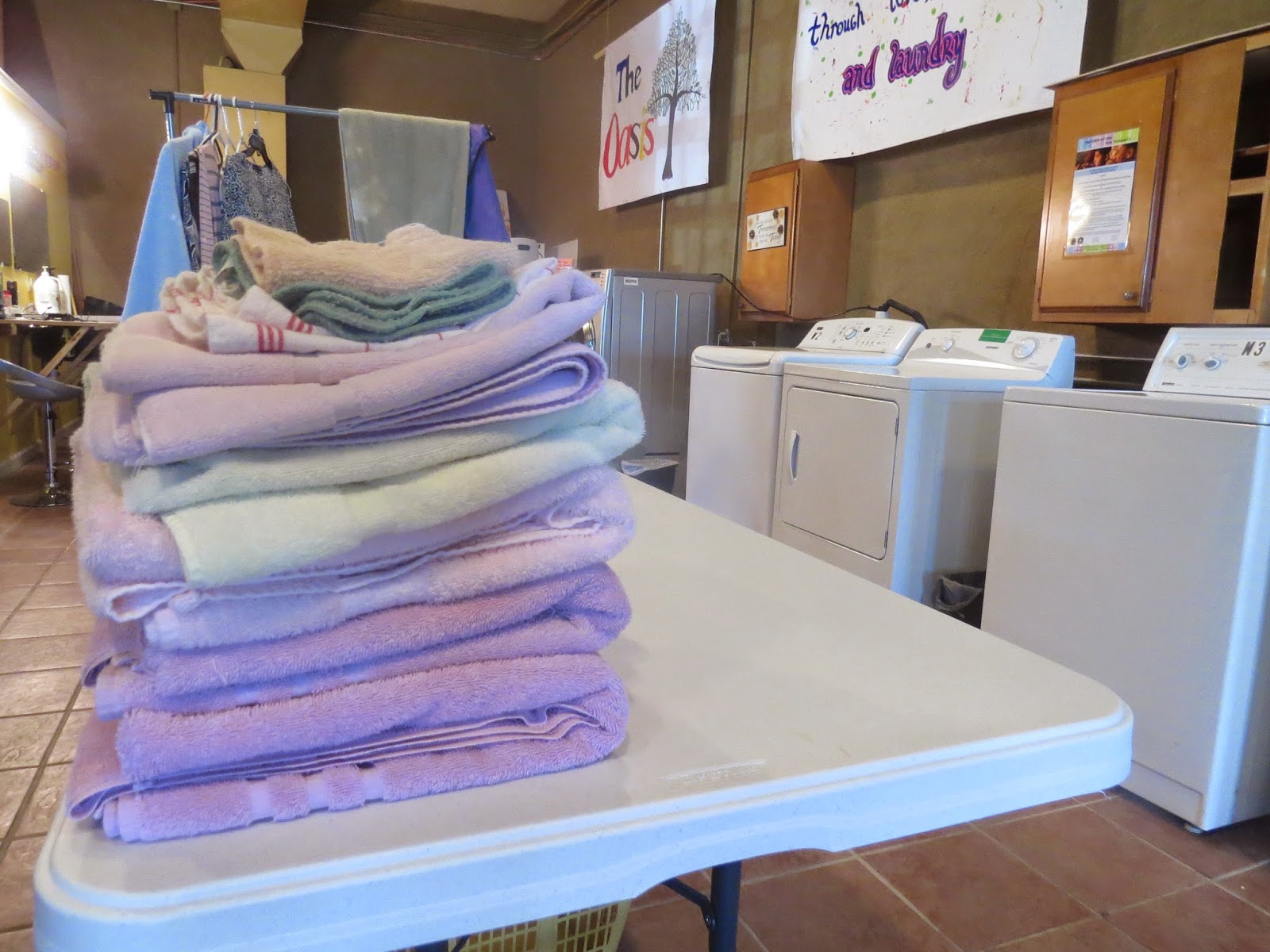 "We're not asking the women for anything," says Addington. "For a load of clothes to be washed at a very reasonable price, we can help them make the decision to help themselves. We only charge a quarter for everything. Think about it.. on the open market, a load of clothes will wash and dry for about five dollars. By the time you add detergent and the fabric softener, you're looking at at least 10 dollars or more. Here, it's 25 cents for everything, and while it's happening, you get the chance to better yourself from whatever condition your life is in.

"For what we offer," Addington says, "we could be the best deal in town." 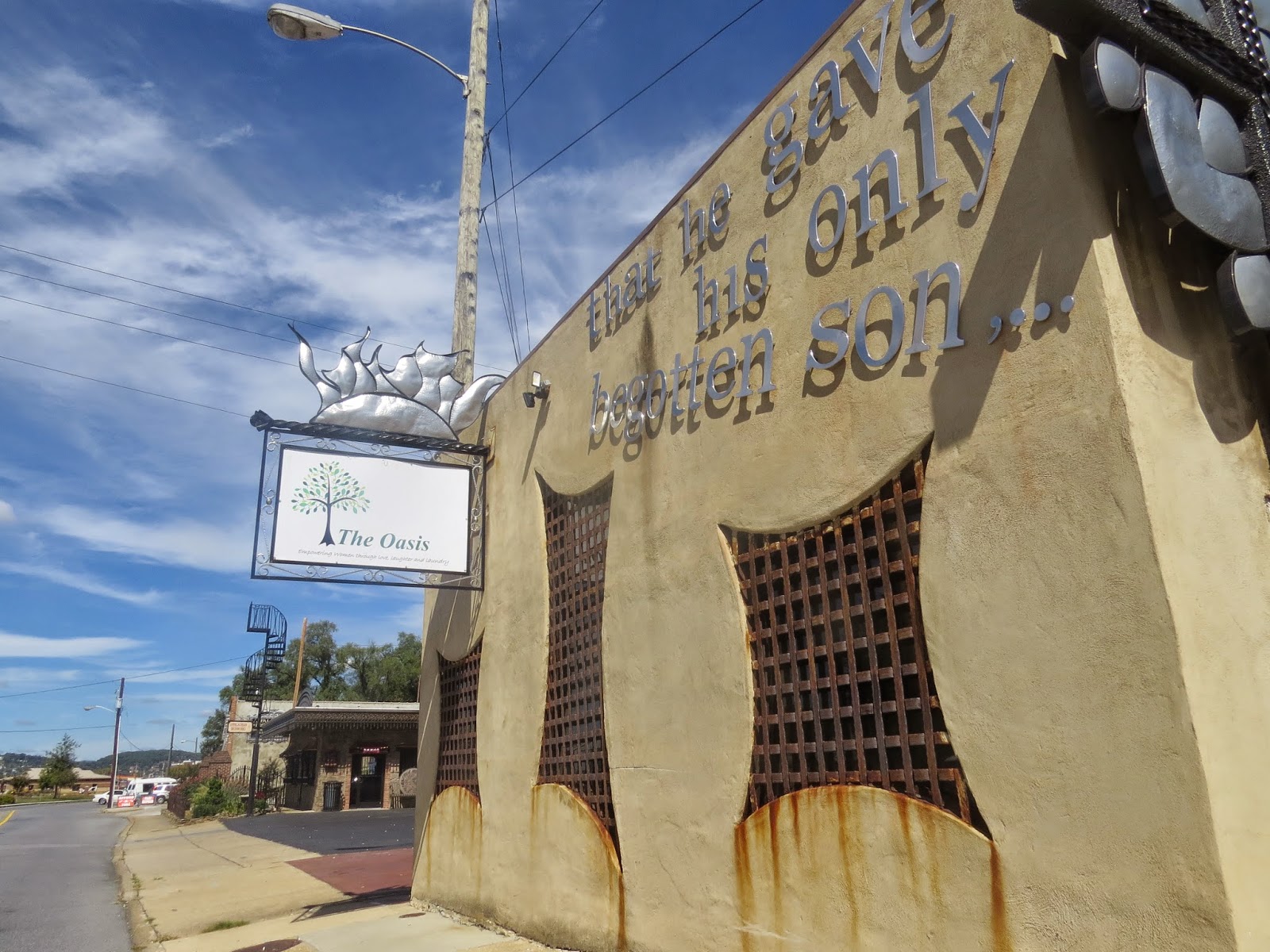 The building on E. Sullivan Street housing "The Oasis of Kingsport" was nothing but bare walls, when Addington first found it back in the late spring-early summer of 2014.

"There's an interesting story to this building," he says. "I'd looked all over downtown for a building, because this is a downtown ministry, I thought," he says. "Anything you could find was about 900 dollars a month and I didn't have much money. I happened to drive by here and saw the "for lease" sign, and thought 'well, I'll drop in.' The owner showed me around, and it was just bare walls. The more I looked around, the more I liked it, and I told him what I wanted to put in the building, the ministry and the mission work, and I asked him what the rent would be.. I'm thinking it's probably 900 dollars just like everywhere else. He says, 'well, let me think about it and call me in the morning."

"The next morning, I called and he says, 'well what do you think?,' recalls Addington. "I said 'I'd really like to have it.. what rent did you come up with?' I was still thinking it was going to be way out of any price range I had. He says, 'how about if you have it for free until the first of the year?' I said, 'oh my, thank you very much, that would be great!"

"Come to find out later in talking with his wife, they had been praying for 3 months what they could do to serve God better," Addington says. "They'd had some rough times in life and he accepted Christ and it turned his life around. He told me what a good feeling it is, to see the women in need of Christ, coming in and knowing that they're leaving with the Spirit of God in them, 'empowering' them to do better with their lives. That's a powerful message. "He's part of that, in a way that he could never have imagined."

"That's how we got the building. God sent us this building."

TAKE A TOUR OF THE OASIS OF KINGSPORT BY CLICKING THE PLAY BUTTON BELOW: 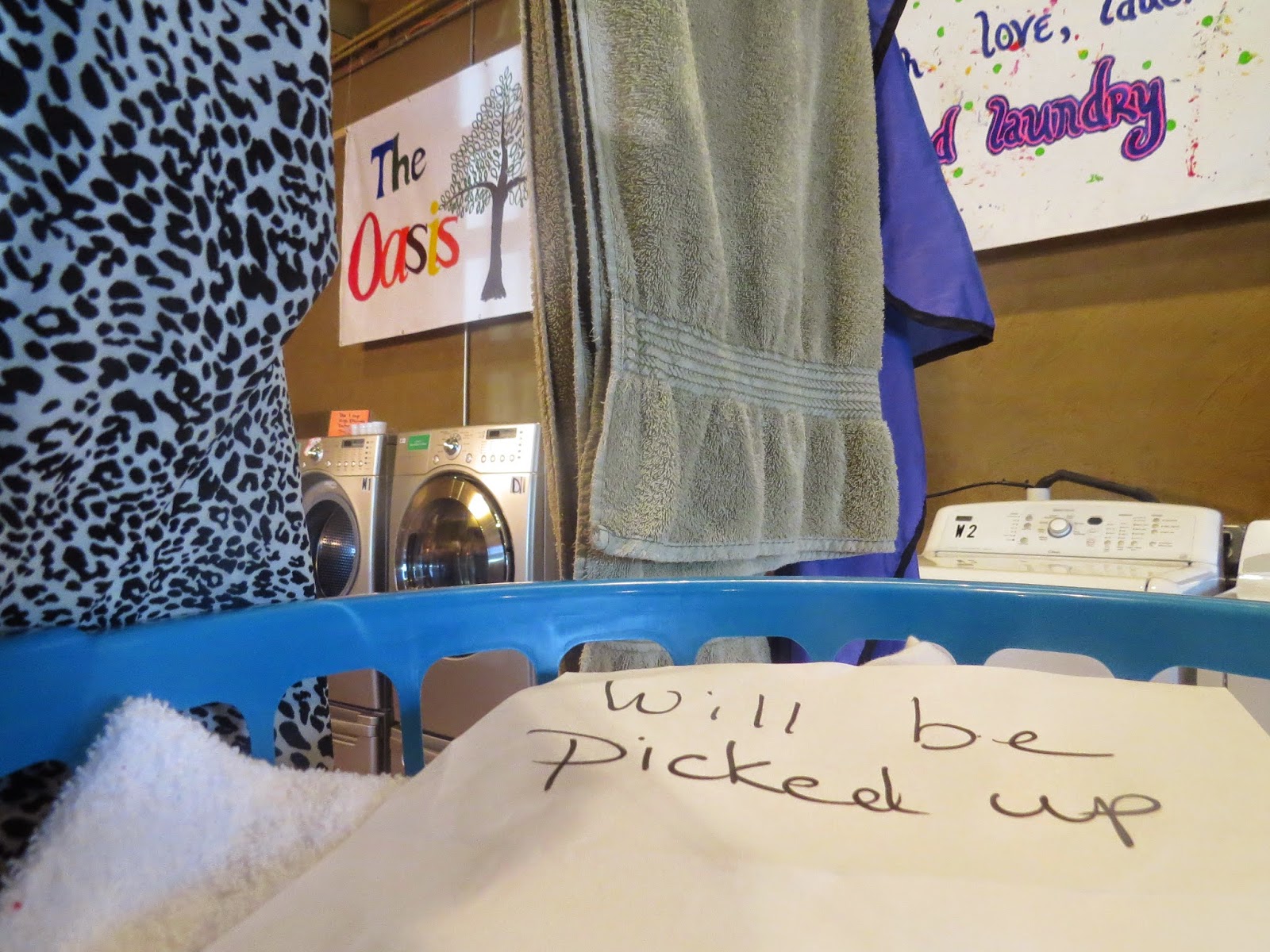 Days at the Oasis of Kingsport are full of inspiration, joy, laughter, and of course.. lots of laundry.

"This is a place to come and experience Christian fellowship," says Addington. "It's a positive atmosphere. We'll sit down and we'll listen and we'll counsel you, and we will not judge you. You can help us by just following the rules and making a positive attempt to better yourself. That's our goal and our mission. We want you to become somebody."

So far in the short life of the Oasis, 75 women have come through the doors to experience the fellowship while the wash gets done.

"Out of that 75, we have a 90 per cent retention rate," Addington says proudly. "They have come back at least once, and then maybe a couple of times since their first time, and each time they're more positive about their outlook." 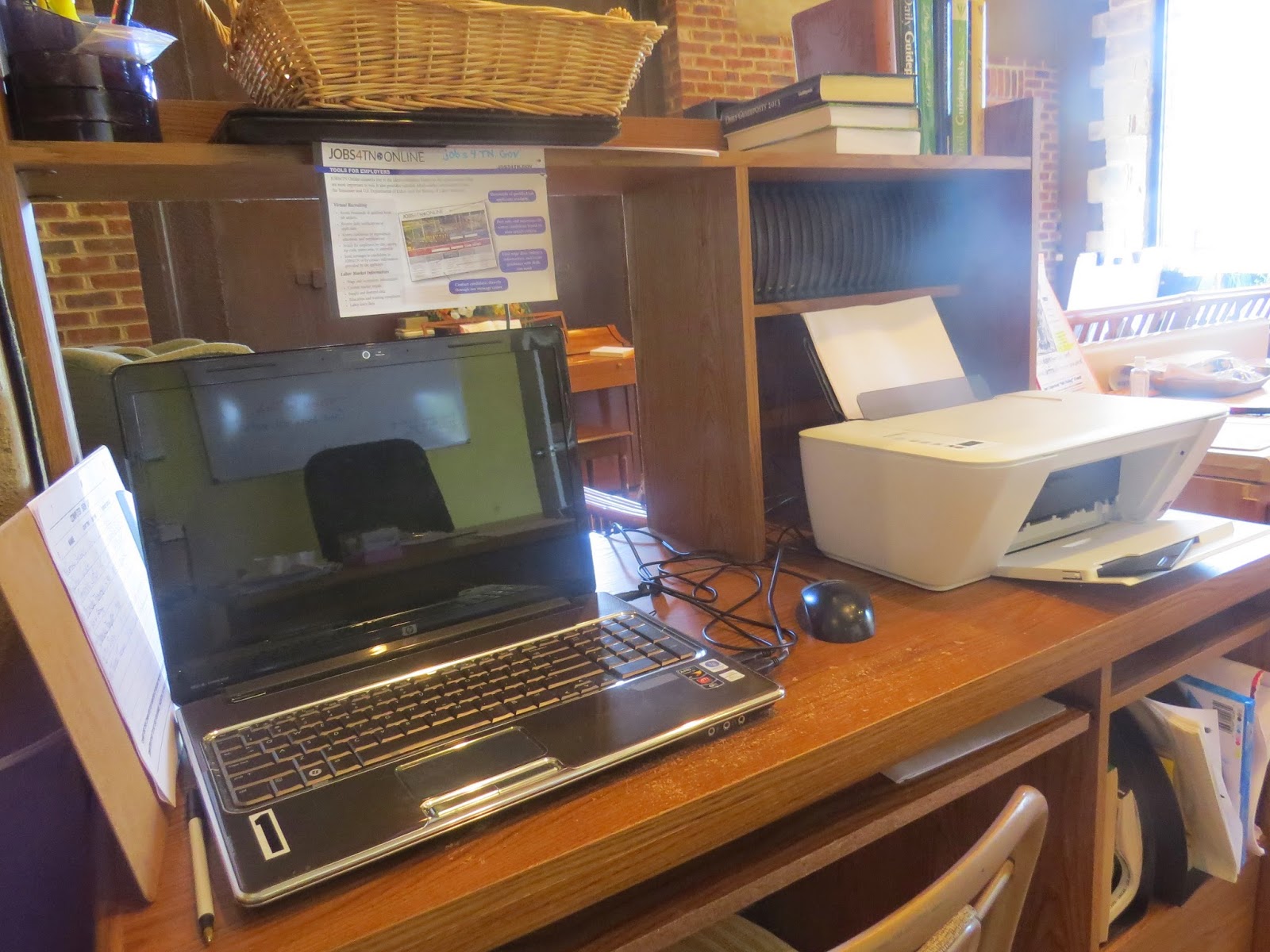 Success stories? The Oasis of Kingsport has plenty of those, too.

"So far, three women have been able to get jobs by working on the computer while doing laundry and hearing the ministry, which keeps their spirits and their confidence up," he says. "We've also had women coming in who live in cars because they could not afford housing when they first came to us. They were able to get more secure housing once they came in and became more stable. In terms of health care, we're partnering with the Providence Clinic at the First Baptist Church here in Kingsport, and we steer our ladies down there if they have a medical need. They can also take the Crossroads bus once a month to First Broad Street (United Methodist Church). Although we don't know of any abusive situation among our visitors, we do have women who have been in jail, and some with addiction problems. We do not drug screen, because again, we do not judge people."

Addington says the Oasis rules are not unreasonable.

"Rule number one.. respect your fellow person that's here.. do not take advantage of them. Number two, participate. Don't just wash your clothes and sit there. Of course, we don't allow alcohol or drugs or anything like that, and we don't have overnight facilities.. Also, no men are allowed inside during the hours of operation. When you come through the door and you agree to the rules, you can stay." 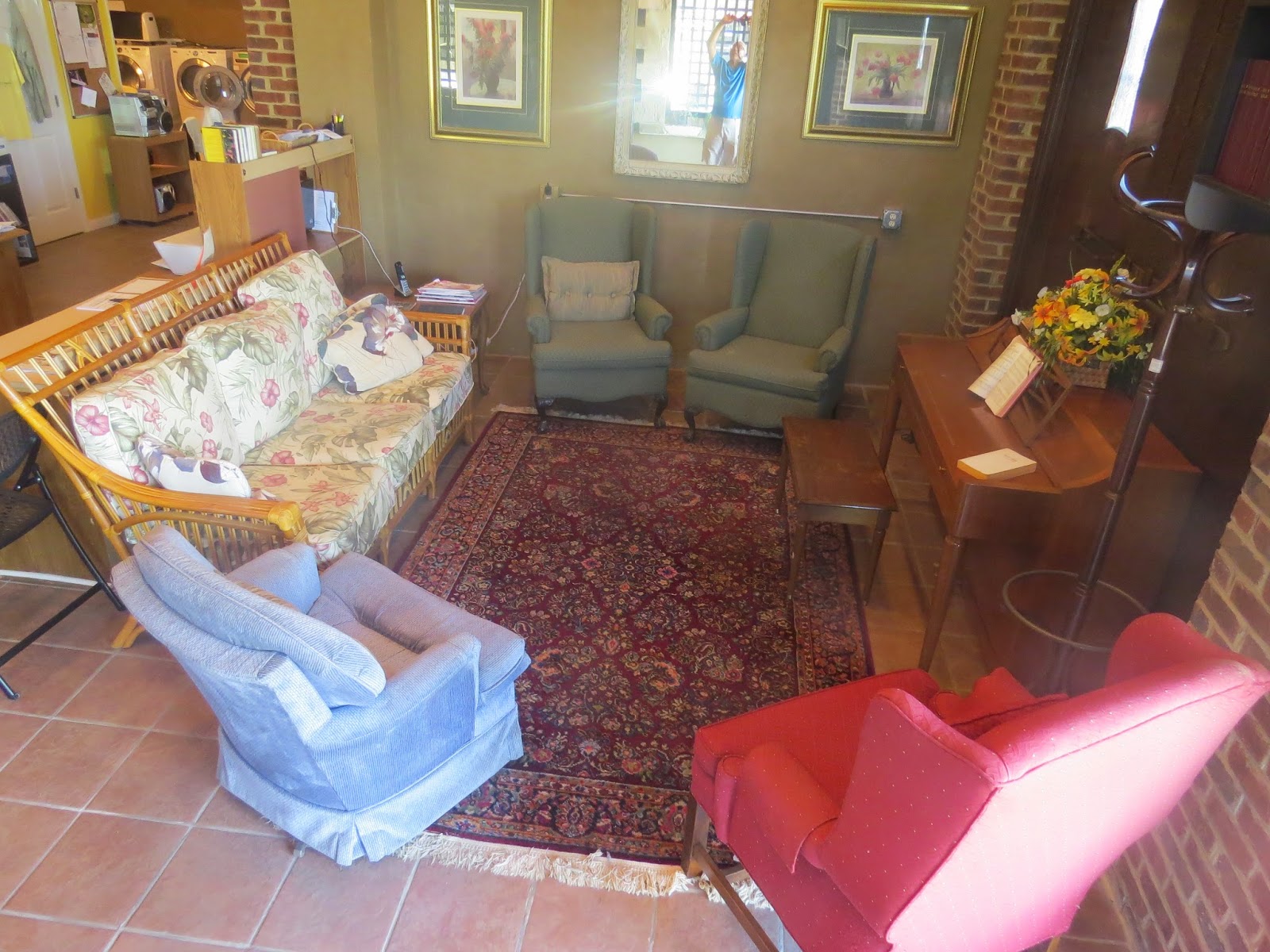 Not all the women coming through the door are in need of the spiritual help and encouragement. Many women volunteer their time to see to the needs of not only the clients, but also the needs of the ministry as well.

"17 churches in the Kingsport area are represented among our volunteers," Addington says. "The opportunity is there for anybody from any church to be here, if they'll just take the time to see how rewarding it is, how much the women appreciate it and what a blessing it is. Word of mouth helps us, and there is a certain degree of trust that gets built up between the clients and the volunteers. 90 per cent of the people who come through the doors for the very first time, have said 'I'd like to come back, if it's all right."

"Of course it is," Addington notes. 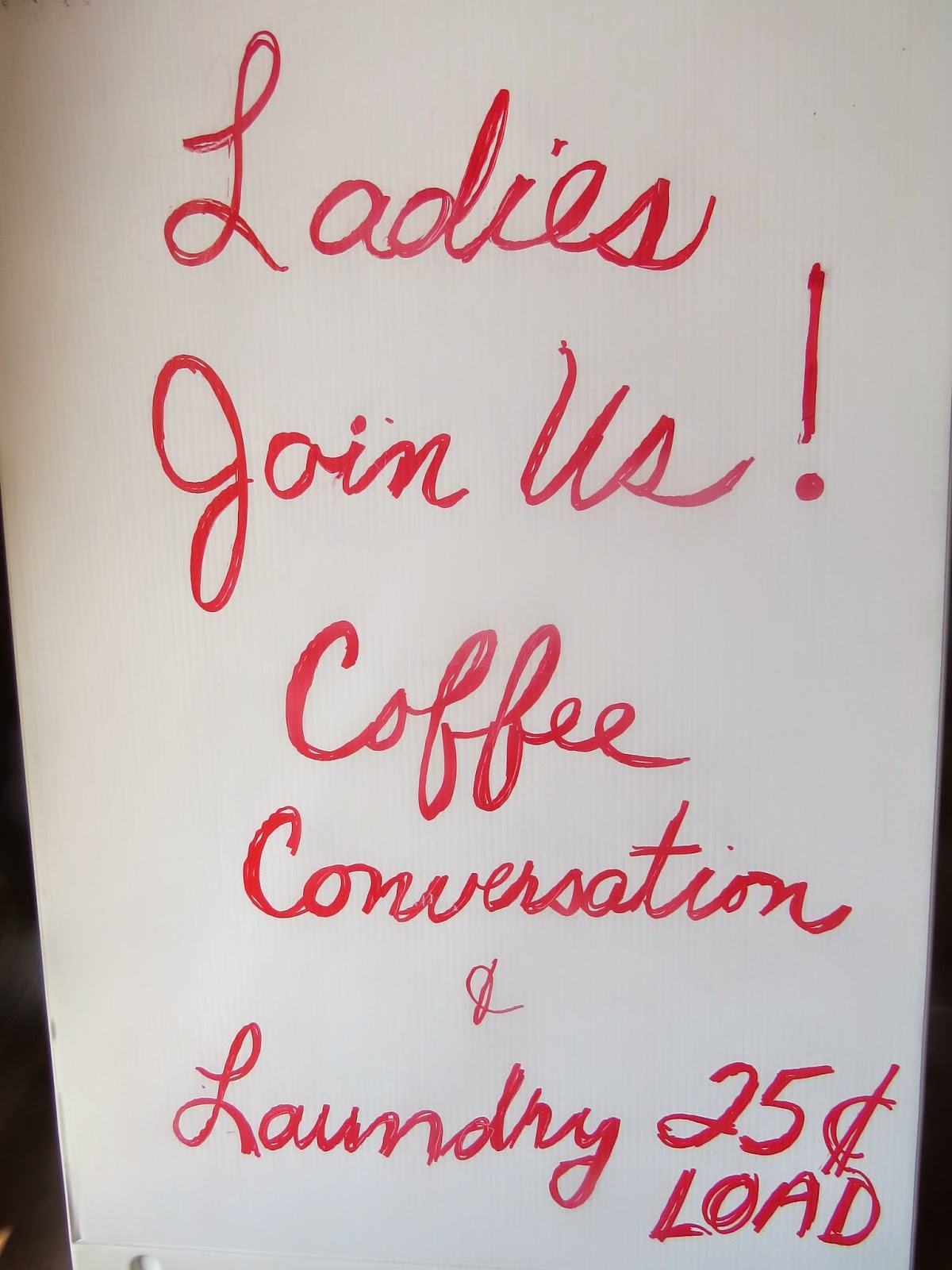 One area that is being targeted for the Oasis, is the very area that it is surrounded by. Many women in the Riverview community may not know the Oasis outreach ministry is right in their own backyard.

"We're not doing a very good job of letting African-American women know that we are here to help," says Addington. "We did get a visit from three women who found out about us they said while visiting the the food pantry at the First Christian Church in Colonial Heights. After they came by to visit, two of them sounded very interested in coming back. The third decided the "Oasis" wasn't for her, and that's going to be true sometimes. The program is not for everyone.. it can help you make positive choices in your life, but it doesn't force you to make those choices."

"That's why we reached out to the Douglass-Riverview neighborhood website," says Addington. "We want to let our next-door neighbors know that we are here, and that we can help. We really think that once they come in and will trust us, they'll benefit from it, and then they'll tell somebody else." 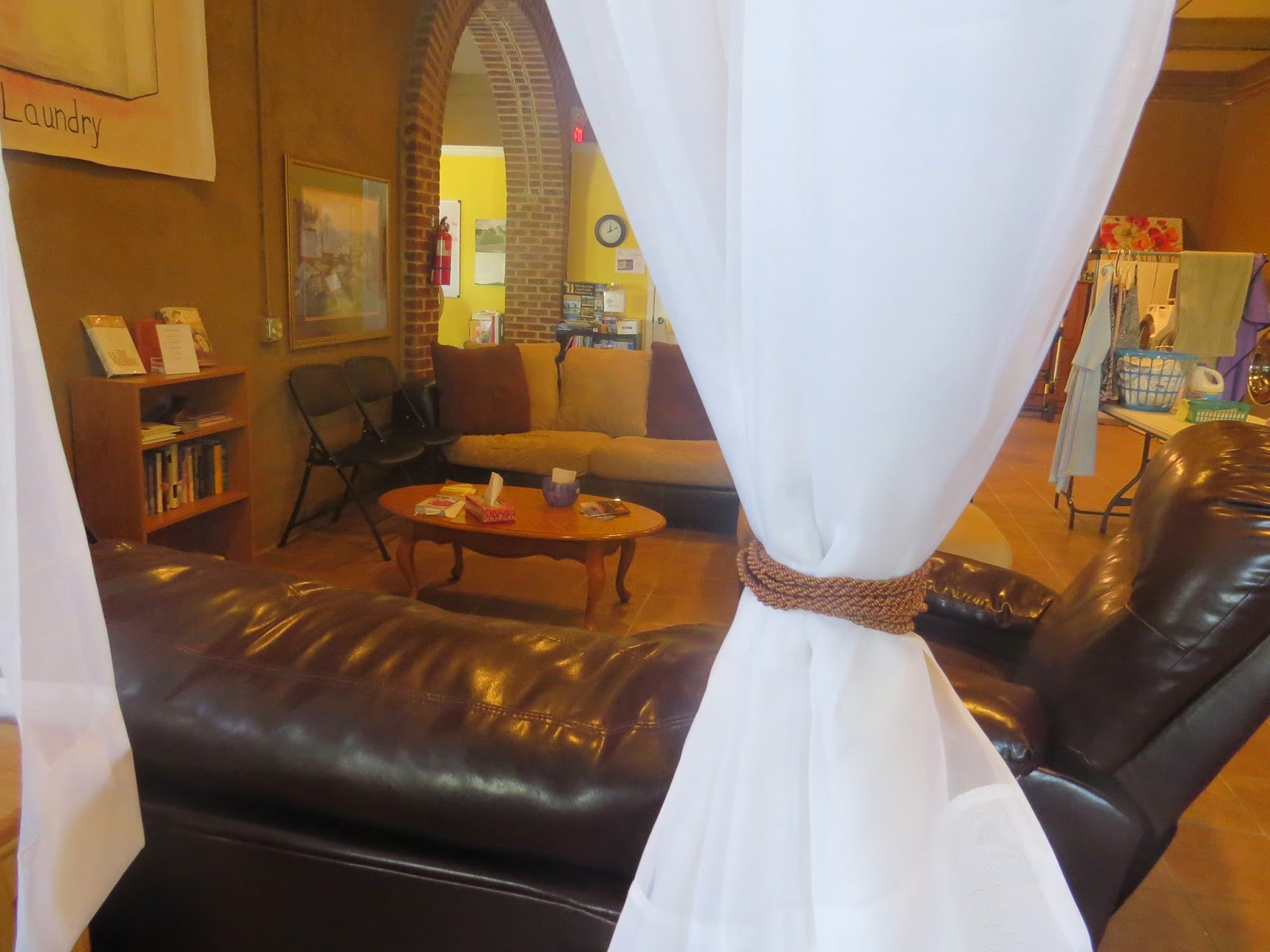 Addington says, the welcome mat is out to all women who are missing something in their lives.

"We want to help them find the confidence they need in this world. We'd love to have them 'graduate,' and then tell us 'see you around..you did a good job.'"

"That's really our goal," Addington says, "to not be here 10 years from now, and see all these empowered women with their heads held high, and self-sufficient."

"Here, you'll find love, laughter and laundry," he says. "We'll give you that and more, if you'll just trust us."
Posted by douglassriverview at 10:14 PM