Former longtime Johnson City resident Dr. Rosemary Gray, chief diversity and inclusion officer at West Texas A&M University in Canyon, Texas, has announced her retirement from a long and successful career of more than 30 years in higher education as an administrator, educator and community leader. Her retirement will begin after the first of the year. 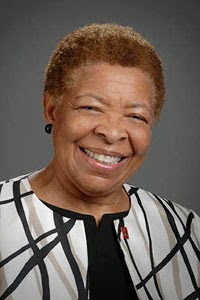 Dr. Rosemary Gray was appointed August 1, 2013. Prior to this appointment, she served in a variety of capacities at many universities and campuses across the country.

In addition to her current and previous administrative positions, she has served as a public school teacher of English and department chair, adjunct faculty, and instructor at various public schools, community colleges, and universities in the District of Columbia, Tennessee, and Virginia. She has also served as a diversity consultant to public schools, city governments, a state task force on African American males, and has chaired university diversity task forces, advisory groups, and a committee on Black graduation rates for Black student-athletes. Dr. Gray has presented at the National Association for Multicultural Education (NAME), and other national, regional and local diversity conferences. Dr. Gray also received a 2010 Louisiana Most Powerful Woman Award from the National Council on Diversity.

Dr. Gray has worked at WT to promote and increase diversity and inclusion through campus collaborations to support recruitment and retention of under-served and underrepresented students as well as helping with efforts to build a diverse faculty and staff.

“I have had a wonderful experience at WT,” Gray said. “Dr. O’Brien and his wife Karen are the best that I have seen when it comes to building community on a University campus.”

Her community interests are health education and revitalization of minority communities economically and educationally along with multicultural awareness training and skill-based diversity training for increased understanding of the benefits of workforce diversity.

“My future plans are to enjoy my family. I have an adult son, and I am the Glam Mom of one very special Chihuahua, Savannah Rose. Eventually, I will do some writing about my career in secondary and postsecondary education, women, and diversity.” Gray said. “West Texas A&M University has been a wonderful experience for me as it gave me an opportunity to assist students, faculty, staff, and the community with diversity and inclusion.”

“Dr. Rosemary Gray has done an excellent job during her time at WTAMU establishing and developing a foundation for us to fulfill better our mission of being a diverse and inclusive student-centered community of learners. She will be missed.” J. Patrick O’Brien, University president, said.

An interim will fill the position while a national search is conducted to fill the role of Chief Diversity and Inclusion Officer.
Posted by douglassriverview at 4:40 PM