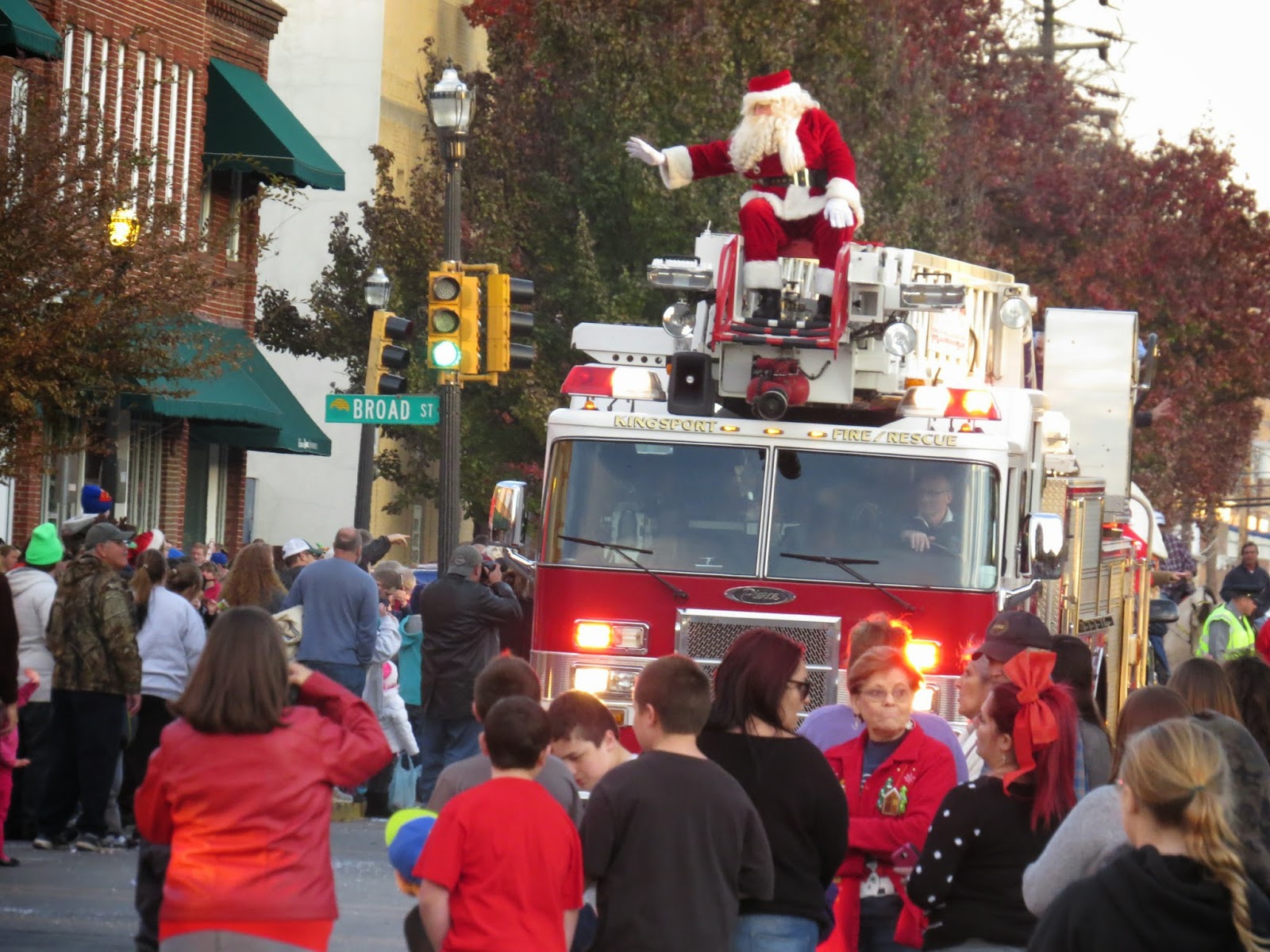 Santa Claus made his annual trek through the streets of downtown Kingsport on Saturday, November 22.

Thousands of people lined the streets to greet Jolly Ole St. Nick, who had just gotten off the Santa Claus Train, another annual trek through Southwest Virginia. He delivered toys and goodies during the trip, and his elves (members of some of Kingsport's non-profit agencies), helped hand out the goodies along the downtown parade route.

Kingsport's Santa Claus parade is like its 4th of July parade. Long. It seems that nobody can get enough of it. 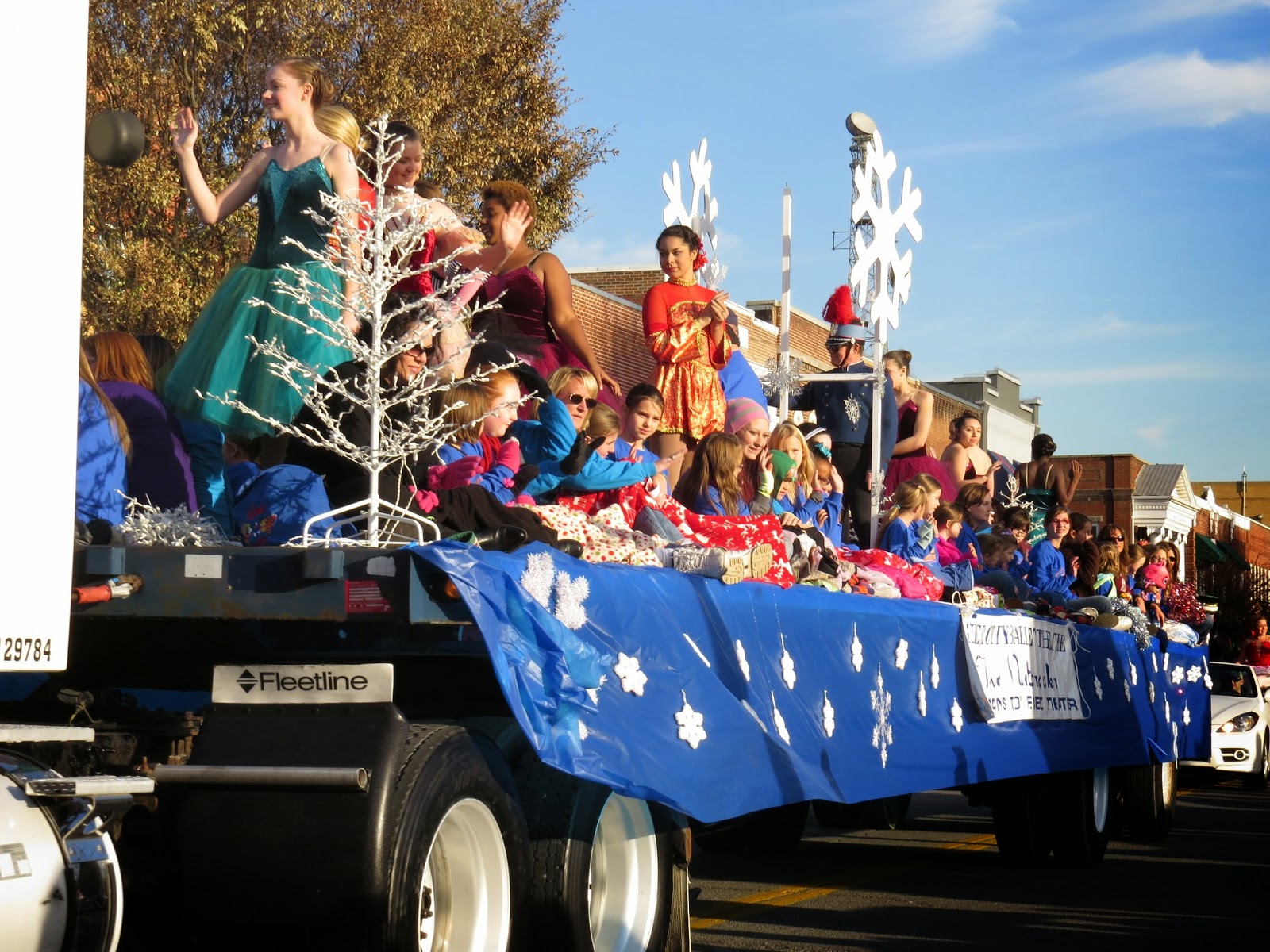 Folks 'oo'ed' and 'ah'ed at every passing car or float, as you would expect them to. Dozens of floats came down Main Street where the parade traditionally begins, after Santa and his train guest warm up the crowd. There was plenty to see and hear, as float after float came by. There were cars with dignitaries in them, to genuine floats sponsored by local businesses with people on them. There were military vehicles and veterans, but the high school ROTC marchers in formation, seemed to get the most applause. 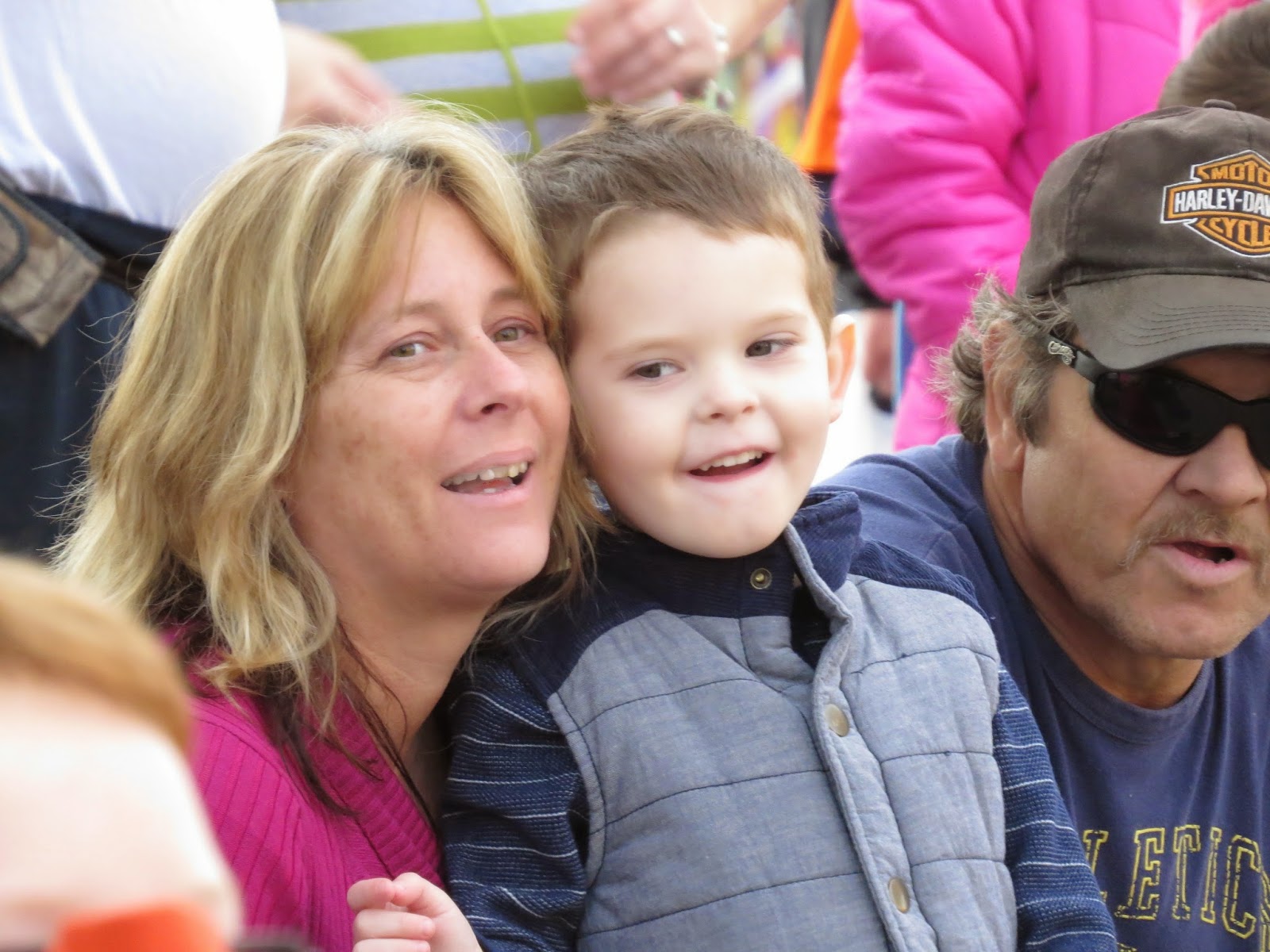 There may have been just as many kids as adults along the route, eager to see the next big thing coming down the street. They were not disappointed. Cartoon characters, TV personalities, pretty ladies, and guys giving away handouts for pizza and local theaters. Make no mistake about it, though... it was the free candy the kids were after. Halloween can't hold a candle to the treats that a kid can get, as floats, exhibits and parade cars go by. 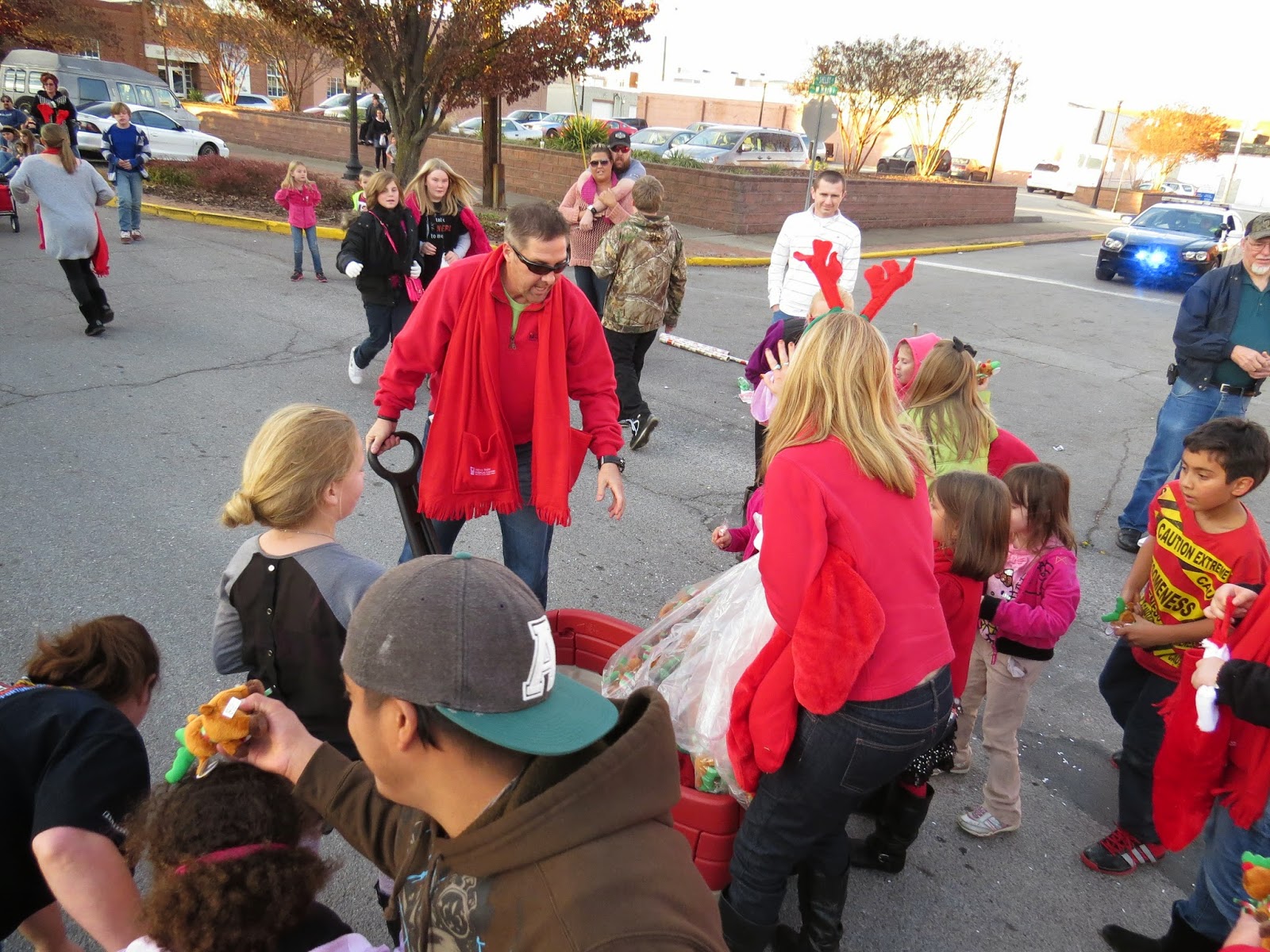 Minor mishaps do happen in any parade, and any time something other than candy was given out, it caused a small panic. Kids, with their parents on the fly, simply ran out into the street and up to the parade participant, eager to get the stuffed animal, or the candy doll, or the bright toy being given out. Despite the admonishment of the participant to 'don't run into the street, take your time, don't push, be careful.... not a single kid was wanting to hear that. All they could think about was the prize that awaited them. They were not disappointed! 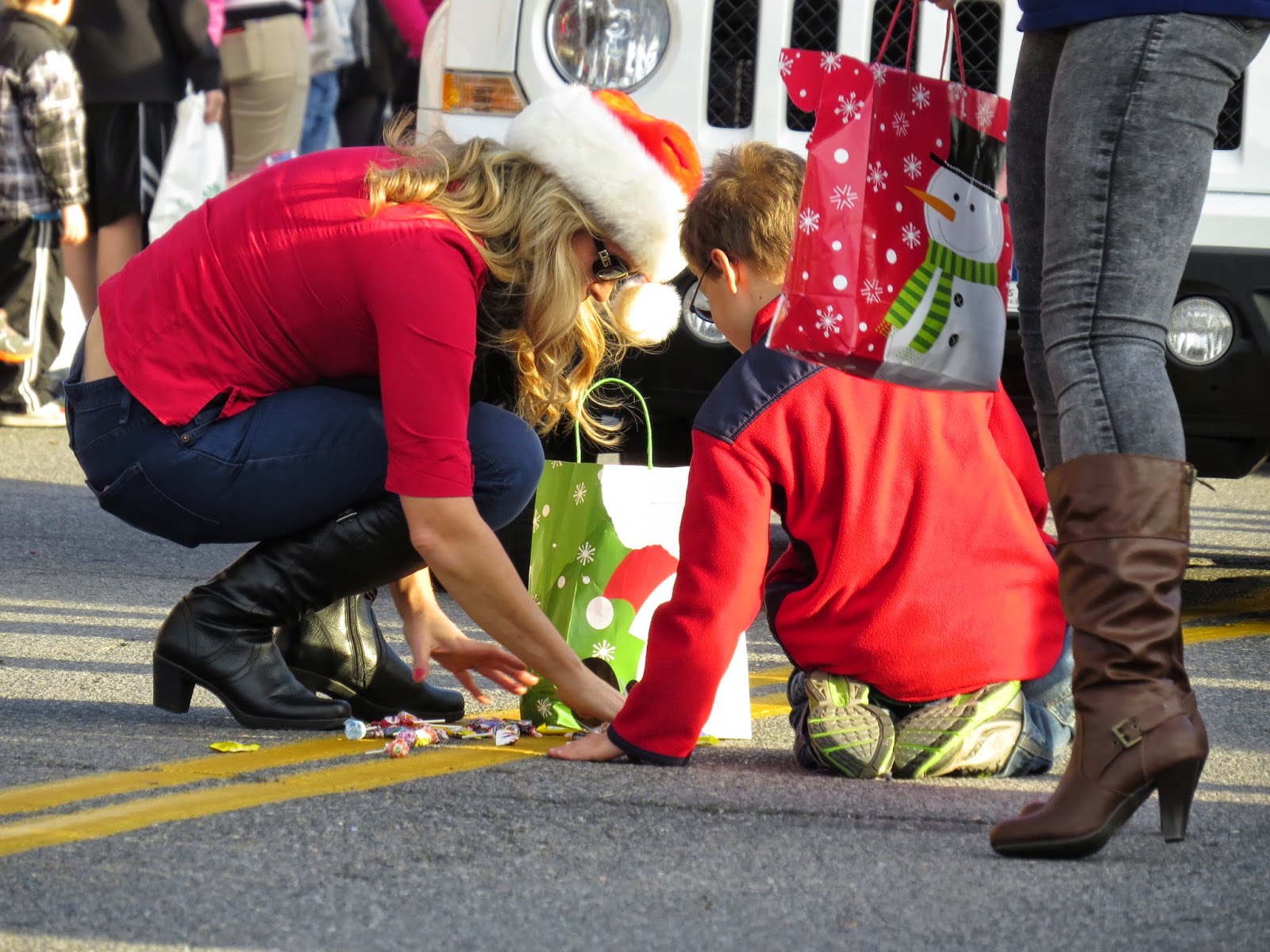 Probably the best acknowledgement of the Kingsport Santa Parade was the realization that parades are indeed, all about children. Whether in New York City or Kingsport, Tennessee, the children are the most important recipient of the day's efforts. The most prime example of that, was when the bag containing one small child's candy, accidently burst, spilling candy, chocolates, toys and goodies onto the street, right in the middle of the parade route. This long parade came to an immediate halt, while grownups gathered and scooped up all the goodies into a new bag. The end of the parade got ahead, but not one event vehicle moved, until all of the items were put back into the bag for the child, who was glad to get everything back.

You won't find the big-city parades willing to hold up an entire procession, for the sake of one child and his candy! 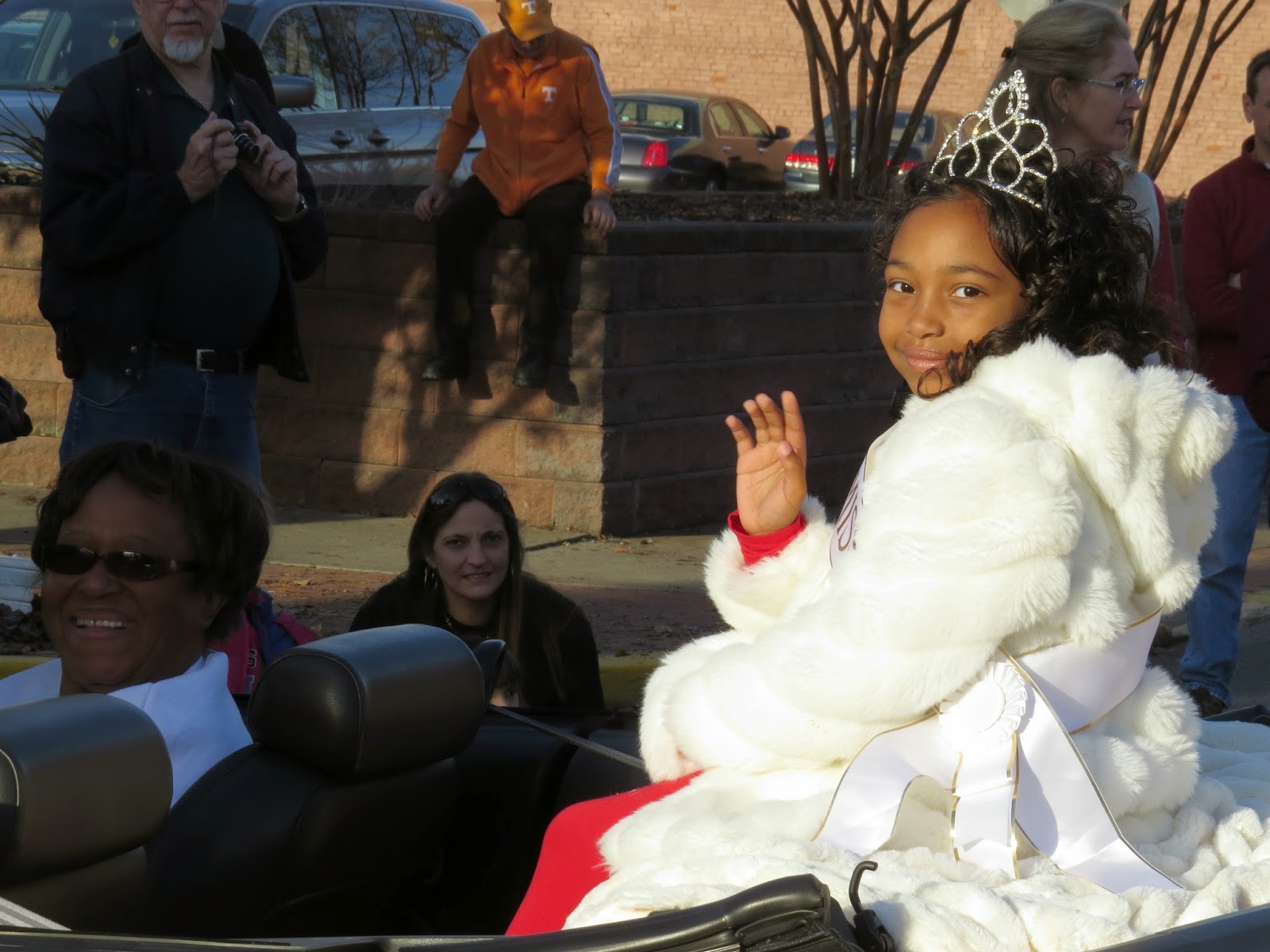 It's a safe bet that just about everybody in Kingsport was on hand for the Santa Claus parade. For the ones who could not attend, enjoy these pictures, plus videos of the Sullivan South, Sullivan North and the Dobyns-Bennett High School bands!


Posted by douglassriverview at 6:10 PM