KINGSPORT — On a night when one of the greatest track athletes in Dobyns-Bennett history was honored, the D-B girls and boys swept the team titles in the Big 7/IMAC track meet at the Dan Crowe/Tom Coughenour Track. 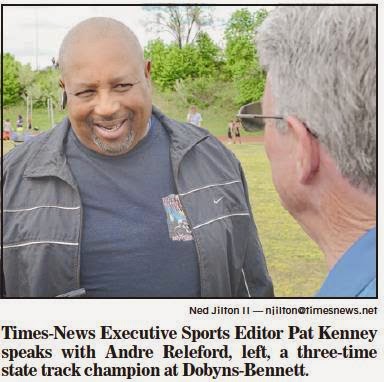 Friday saw the return of former Indians standout Andre Releford, who was the Tennessee 100-yard dash champion in 1971, ’72 and ’73. He helped lead the D-B to boys state track championships in 1971 and ’72.

“Coming back here is such a thrill,” said Releford, who now lives in Blacksburg, Va. “I just wanted to say thank you to all the people who supported me when I was here at Dobyns-Bennett.”

He posted personal-best times in all three of his individual races.

“The competition was really good in all the races tonight,” Barrett said. “I was just trying to beat whoever I was running against.
“To earn this award is an extreme honor considering all the good athletes here tonight.”

“I was really happy for our relay team,” said Lord, a sophomore. “In the 400, I just had a burst of energy and that got me through that race. In the 800, I just got mad at myself because I thought I could be running faster. I started kicking and just went for it.”

Daniel Boone standout Adam Barnard, the defending state 1,600-meter champion, put on a show from start to finish in his specialty. Barnard blistered the track to easily take the event title in a stellar time of 4:14.14.

“It was a little different strategy tonight,” said Barnard, who also won the state cross country individual crown last fall. “Usually I just hang back and use my kick at the end. Tonight I went hard from the very start. That pace pulls my teammates along and they run fast, too, so that’s a good thing.”

Barnard was named the meet’s most outstanding male runner.

The Indians’ Alijah Dunn exploded off the board and had a leap of 46-7 in the triple jump. That distance was the best recorded in the state so far this season.

“My first jump was 46-3 so I knew I had it in me,” said Dunn, named the meet’s most outstanding male in field events. “I moved to a shorter board and felt more comfortable. That was the key.”

D-B’s Sasha Morrisette was named the meet’s most outstanding female in field events after winning the long jump (15-5) and triple jump (35-4¼). She also finished fourth in the high jump.

Science Hill sophomore Halle Hausman had another showdown with the Wilson twins from Morristown West. Last Saturday, Hausman outkicked Cherie and Chantal in the 1,600 meters at the Frank Carver meet for an impressive win, and she repeated the performance Friday night.