KINGSPORT — “There is still work to be done.” 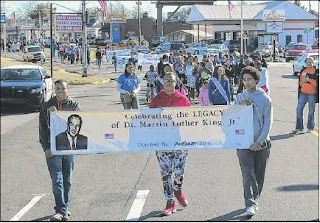 As participants get ready to organize the Kingsport parade that kicks off the local celebration of the national holiday that honors the late Dr. Martin Luther King Jr., parade organizer Ronnie Collins reflects on where the commemoration has come in recent years.


“At first, the parade was held on Main Street,” he said. “It was kind of out of the way, so that Kingsport could conduct its daily business without cars having to go around people marching in the street. We considered it a huge accomplishment to get the parade moved over to Center Street a few years later. That raised awareness, put it on the front burner in Kingsport and gave it much more importance .
“It has grown every year since then.” 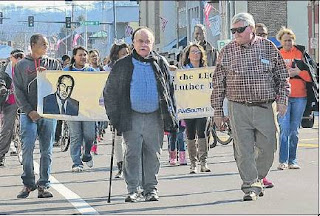 The 16th annual parade kicks off at noon tomorrow. Participants are asked to organize in the Rikki Rhoton Allstate Insurance Company parking lot on East Sevier Avenue at East Center Street. People are encouraged to march in the parade and show support for King’s memory. The route follows Center Street to Sullivan Street, crosses Broad Street, and culminates with prayer and speeches at City Hall.
The theme of this year’s Dr. Martin Luther King Jr. Day parade is “Our World, His Dream: Freedom! Make It Happen! Nonviolence 365.” 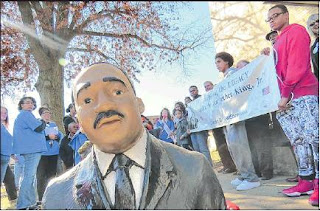 
“This parade, the annual gathering of people of all colors, faiths, backgrounds and cultures, must continue moving forward in the spirit of fellowship and harmony, as Dr. King would have wanted. The holiday is not just another day off from work or school,” he says. “We still have a long way to go in honoring his legacy, but we are moving in the right direction.”    The parade is sponsored by Food City, My Brother’s Keeper, Joshua Generation II, Office Depot, Putting Babies First, New Vision Youth, H.O.P.E., and the Upper East Tennessee Human Development Agency. 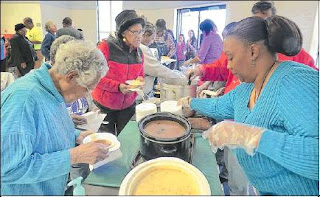 After the parade festivities have concluded, the celebration moves over to the Riverview Community Room on Wheatley Street at 1 p.m. where all are invited to the annual MLK Day Luncheon, sponsored by New Vision Youth.
On the menu are homemade spaghetti, salad, bread, desserts provided by the Kingsport Psi Omega Omega chapter of the Alpha Kappa Alpha sorority, and drinks provided by the Sons and Daughters of Douglass Alumni Association. The luncheon, which also features singing and door prizes, is free to the public. 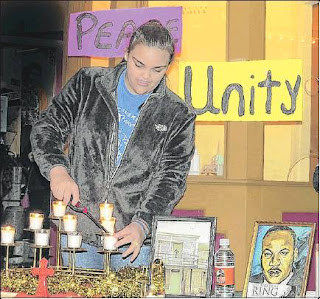 The day’s events conclude with a memorial candlelight vigil at 6 p.m., also sponsored by New Vision Youth. Everyone is encouraged to bring a candle to the gathering, to be held at the gazebo in Glen Bruce Park, between the Kingsport Public Library and Church Circle downtown. It, too, is free to the public.
Other events around the area on Dr. Martin Luther King Jr. Day include the Community Breakfast and Celebration at 7:30 that morning, at the First Presbyrterian Church, 600 W. Main St. in Morristown, and the annual Dr. Martin Luther King Jr. Day Dinner at 6 p.m. at the Carver Recreation Center in Johnson City.


Posted by douglassriverview at 9:14 AM