KINGSPORT — Cold and windy weather did not deter the more than 100 men, women and children who came out to participate in the annual parade celebrating the life and works of Dr. Martin Luther King Jr.

The folks were simply bundled up in heavy coats, headgear and scarves. They stood close together, some drank coffee and as the parade commenced down Center Street, everyone seemed happy to be there. 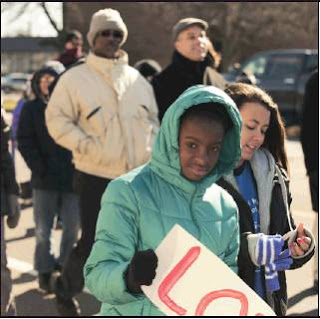 “Today is cold, but it’s excellent,” said Pastor Ronnie Collins, the general overseer of Monday’s parade. “Today’s turnout is very good. I was hoping to get 50, and we’ll get at least that. As long as people come out, we’ll celebrate.”

Collins got his wish on Monday. Not only did 50 people come out to participate in the 16th annual Dr. Martin Luther King Jr. holiday parade in downtown Kingsport, the number was closer to 100.
People of all ages, plenty of young children and teenagers, older adults and seniors, Caucasians, African-Americans and Hispanics were present. Mayor John Clark and City Manager Jeff Fleming also walked and offered some comments to those in attendance when the parade concluded at city hall.

A SLIDE SHOW OF THE PARADE: 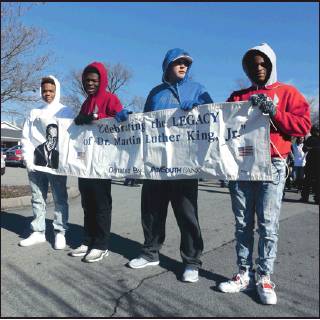 Collins noted the diverse group of people who braved the cold to honor King on Monday.

“It’s almost even, and last year we might have had more non-African Americans,” he said. “We’re happy with the people coming out, we’re appreciative and grateful for those who show up and celebrate Dr. King’s holiday.”

“We talked about (their participation) and our attitude has been, when people call, I have to know their attitude,” Collins explained. “Do you believe in non-violence, no matter what you do? We want goodwill, non-violent people participating in the parade because Dr. King pushed for non-violence. We can get more done nonviolently than we can with violence.”

The theme of this year’s parade was “Our world, his dream, freedom, make it happen, non-violence 365.”

In recent years, racial tensions in some cities have reached a breaking point with the shooting death of Michael Brown in Ferguson, Mo., and the death of Eric Garner in New York City. Last year, nine people were shot and killed at a Charleston, S.C., church, and the gunman said he committed the shooting in the hopes of igniting a race war.

“We see in Charleston and other areas that hate is still here, discrimination is still here, but our attitude is we still have to love everybody,” Collins said. “The love of Christ is still the answer to the racism, so until we get our hearts changed, then we’ll do things and actions that won’t follow non-violence.”

King was born in 1929 and would have turned 87 this month. The federal holiday is the third Monday in January and has been celebrated since 1986. King’s legacy was marked on Monday with special events held across the nation, from parades and church tributes to youth-led service projects.

After the parade, the annual Dr. Martin Luther King, Jr. Luncheon was held in the Riverview Community Room at the V.O. Dobbins, Sr. Complex:


Then, at one of the most solemn of all the events in the Tri-Cities commemorating Dr. King, candles were lit during a Candlelight Vigil in downtown Kingsport:
CLICK ON THE ARROW TO HEAR "THIS LITTLE LIGHT OF MINE" AT THE EVENT:


A SLIDE SHOW OF THE CANDLELIGHT VIGIL:


The celebrated day honoring Dr. King began on Monday morning, at the Dr. Martin Luther King, Jr. Day Breakfast, held in Morristown,TN.  The Guest Speaker was Dr. C. J. Mitchell, Force Master Chief of the Navy Reserve at the Pentagon in Washington, D.C.
CLICK THE ARROW TO HEAR PART OF HIS SPEECH TO THE GROUP:


CLICK THE ARROW TO HEAR "WHAT THE WORLD NEEDS NOW" SUNG BY RITA CASTANON:


CLICK THE ARROW TO HEAR "LIFT EVERY VOICE AND SING," LED BY YOLANDA TREECE:


BELOW IS A SLIDE SHOW OF THE EVENT IN MORRISTOWN:


Another popular event was held in Johnson City, TN.. it was the annual Dr. Martin Luther King, Jr. Dinner.  Guest Speaker was Rev. Alan Evans.
CLICK BELOW TO HEAR A MUSICAL SELECTION FROM MS. HUETTA ISOM AT THE EVENT:


BELOW IS A SLIDE SHOW OF THE EVENT IN JOHNSON CITY:

Posted by douglassriverview at 8:38 AM