Kingsport master artists pass on their skills through state program

This story courtesy the Kingsport Times-News by Calvin Sneed/Newspaper Community Contributor, through the Sons and Daughters of Douglass website

“The key word is ‘traditionality.’ ”

Dr. Bradley Hanson is describing a relatively new state program that promotes the passing on of traditional crafts and abilities from older generations to young people. He’s the director of Folk Life at the Tennessee Arts Commission.

“The Traditional Arts Apprenticeship program allows arts, crafts and skills passed down for hundreds of years to be taught to interested young people in an effort to keep those traditions alive,” he says. “In the five-year history of the program so far, we’ve had 53 teams of master artists and their apprentices.”

For the first time, two teams of a master artist and apprentice are coming from Upper East Tennessee, passing down the skills they have learned over the years to others eager to keep a legacy tradition alive. 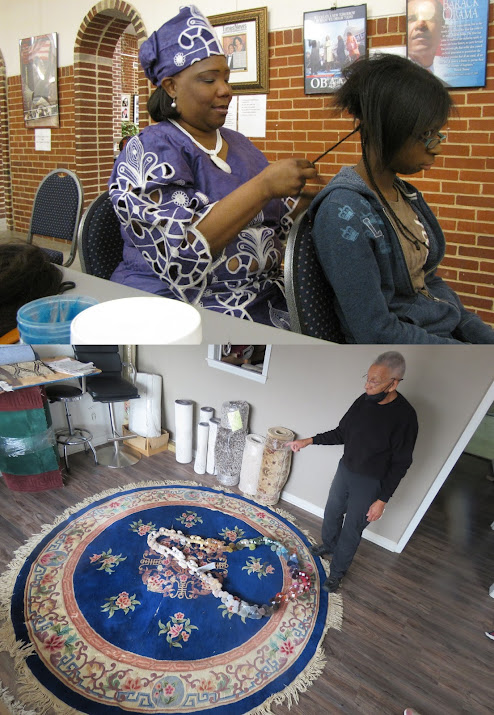 Kingsport’s LaVonda Harris-Price was taught hairstyling born from an older generation. Years ago, Jerry Machen, also from the Model City, invented a new form of artwork, the results of which are now considered heirlooms. Today, they and their apprentices are keeping their inspirational traditions alive.

Harris-Price has always had an interest in styling the hair of African-American women. It started when she was 5 years old. 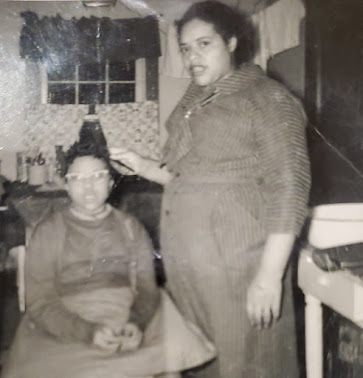 Pictured above is Harris-Price's mentor "Miss Tillie Trammell with an unidentified client in her hairdressing chair, circa 1960 (courtesy Dawn Trammell "Beeannie" Long)

“Our neighbor on Dunbar Street, Mrs. Tillie Trammell, ran a hair salon across the street. She was very good at hairdressing, always had lots of customers. On a personal level, ‘Miss Tillie’ as she was known in the Riverview neighborhood, said she’d keep me weekday afternoons until my mother got home from work. I could have been upstairs playing dolls with her daughter, but I would sit on the steps leading into Miss Tillie’s hair salon with my chin in my hands, watching how she’d style the waves and curls on the ladies that would come through. I was totally fascinated with it.”

Miss Tillie had been noticing the little girl watching her handiwork and knew she was picking it up.

“All of a sudden one day, she asked me if I wanted to try it,” Harris-Price says, “so she started showing me how to braid hair, how to plait it, and how to press and style it. And of course I just soaked it up. I would practice on my little doll heads and just loved it.”

Harris-Price says when she was older, Miss Tillie told her that she herself had been taught the art of braiding and styling African-American hair many years ago.

“That rang a bell with me that if I learned the method, one day I could pass it on, too,” she says. 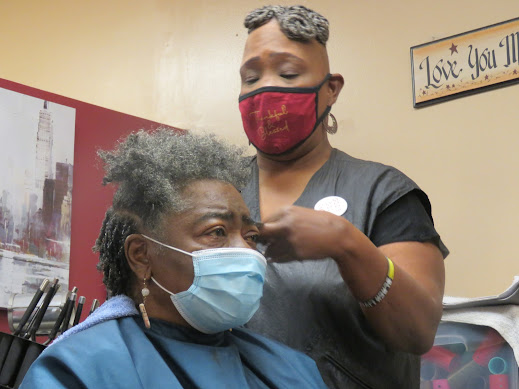 Years passed by at one successful salon in Kingsport, and today she’s located at the All About You Salon on Lynn Garden Drive, still designing hairstyles for African-American women.

She calls herself an old-school stylist, proud of the heritage of styling African-American hair into works of art.

Harris-Price is on a mission to pass her ability on to the next generation.

Her apprentice is 15 year-old Zaniah Greene, a student at Dobyns-Bennett and a member of Kingsport’s New Vision Youth. 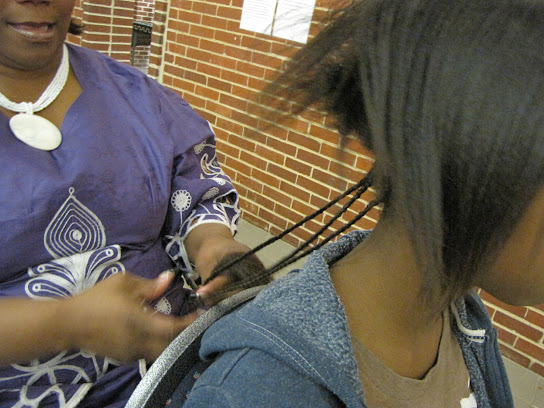 “Zaniah has told me different things that she’s doing with braiding that I’ve taught her, and she’s loving it,” Harris-Price says. “It’s a joy to take what I’ve learned from Miss Tillie and share that with someone younger who’s just as excited as I was at that age.” 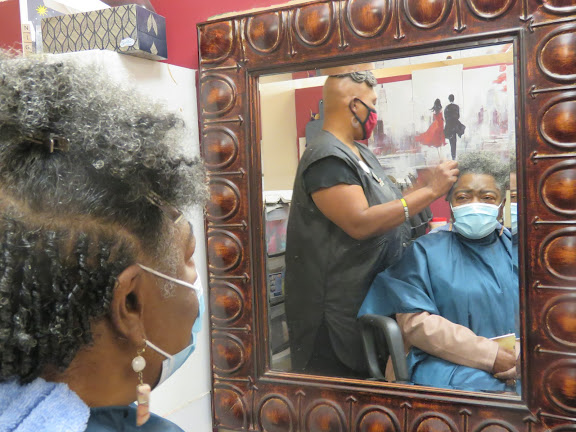 Harris-Price remembers being surprised, but willing, when she got the call from the Tennessee Arts Commission about taking on an apprentice.

“It’s important that we share traditions, histories and legacies,” she says.

Machen began his career installing carpet in 1962 at a Johnson City furniture store. 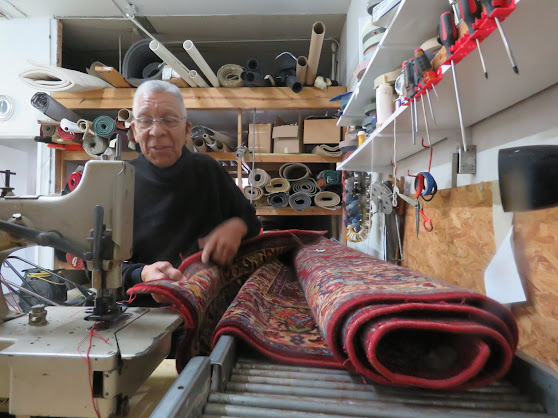 “I had way too many carpet scraps just lying around the office and one day, I saw a picture in the newspaper. I’d been thinking a long time about branching out into artistic areas, and all of a sudden it hit me: ‘I’ll bet I can make a custom rug that looks like that picture with all these carpet scraps I’ve got around here.’ 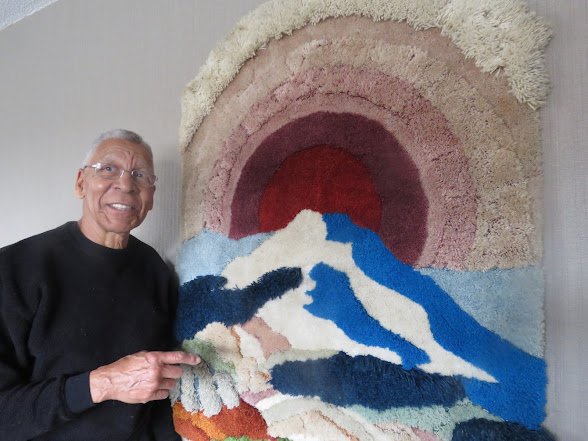 Machen made the first carpet sculpture on the floor of his Dunbar Street kitchen in 1972. He still has it today. If you look at it closely using your imagination, it looks like a view to the west at Kingsport’s Bays Mountain, with the sun about to set behind it.

“That one vision inspired me to make custom-made rug designs using scraps that probably would have been taken to the landfill,” he says. “Meanwhile, a person could just pick something out in their minds or what they’ve seen in a favorite picture, and I can design it and sew it together from these scraps. It’s carpet, so of course it can be cleaned like carpet.”

Eventually, Machen’s custom-made rugs moved from the floors to the walls. One of them was displayed as a calming influence in a familiar Kingsport establishment noted for trying to calm people’s nerves. 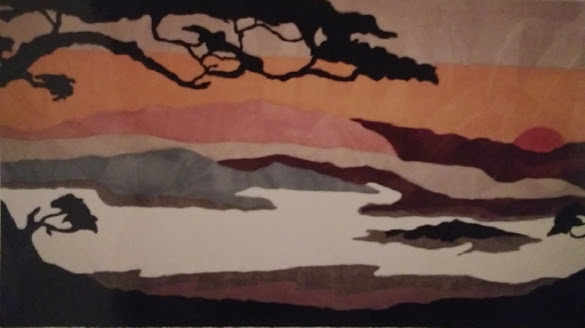 “For the Children’s Wing at Holston Valley Hospital,” he says, “I designed a
carpet wall-hanging tapestry for the children’s playroom. It hung there for
many years, covering an entire wall. The kids loved it. From that grew
another wall-sized artwork: a bonsai tree overlooking a valley with
mountains in the distance. They were both one-of-a-kind custom orders,
where people told me what they wanted to depict and I sat down and
designed it.  The result was magical artwork.”

That description was perfect for what the Arts Apprenticeship administrators

“Jerry even speaks of himself as an artist,” notes Hansen. 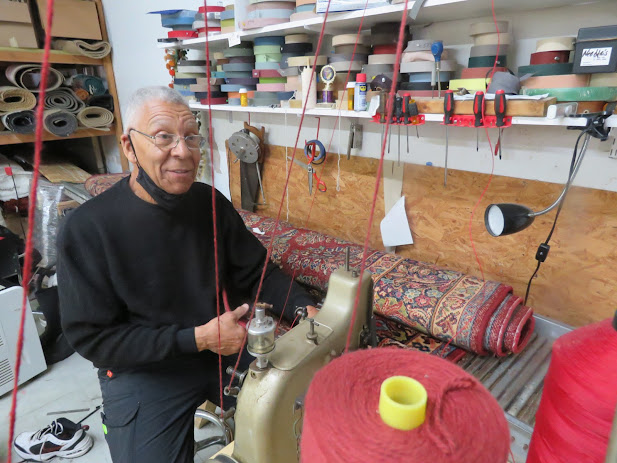 Machen has had one noteworthy customer for his works of art, one with a familiar hankering for burgers, hot dogs and fries.

“Pal Barger called me up one day,” Machen remembers. “He’d heard about what I could do with carpet scraps, so he invited me to meet with him in his office. He said, ‘I’d like you to build me a rug with a Big Pal in the seat of a chair. On the back of the chair, I want a bag of Frenchie Fries. I know if anybody could do that, you can.’ ” 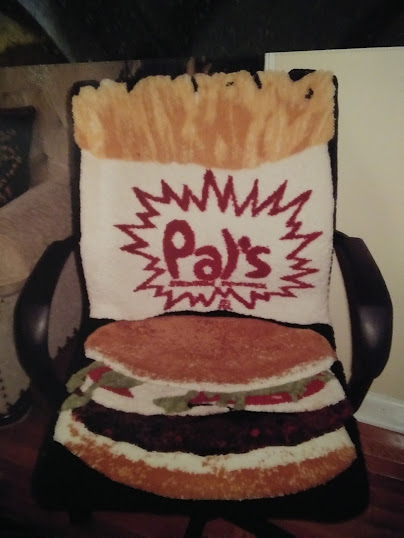 Machen went to the office and drew some designs from logo pictures Barger had given him. The two picked out the colors and the assembly began on the first one. Within a few weeks, the two finished products were a sight to behold. 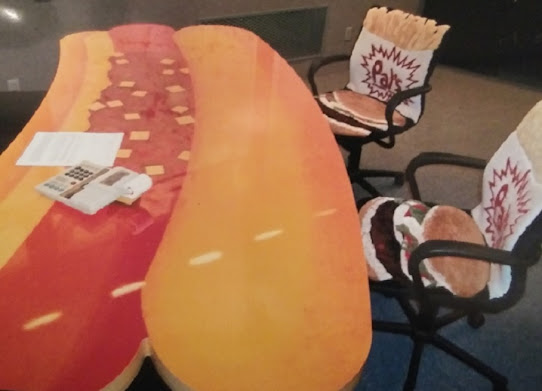 “The expression on his face when he saw what I’d created was priceless,” Machen says.  “He saw it in his mind, and I put it into a carpet tapestry.... He absolutely loved it. His was the expression of a lifetime.  Those tapestries sat in the executive chairs behind his hot dog-shaped desk for a long time. When you saw the desk, you’d see the artwork.  I’m told that sometimes with visitors in the office, he would get up from his chair just so people would notice them. Even when he wasn’t there at the moment, you knew exactly whose office you were in.

“He said it was the most incredible thing he’d ever seen.”

When contacted by the folklife administrators at the Tennessee Arts Commission, Machen was surprised at first, as he admits most artists are.

“I took some convincing when they contacted me,” he admits. “Mine was not a talent that had been passed down to me, so I didn’t see how I would fit the legacy category.”

“Jerry’s talent does indeed fit a different pattern in the Arts Apprenticeship program,” says Hansen. “He didn’t learn to do his craft from an ancestor or anybody who’d done it prior to him. But the apprenticeship program also fits people who are self-taught in a particular area. In Jerry’s case, he takes old scraps of carpet bound for the trash heap and makes beautiful pieces of artwork with them. It’s easy to see how that would fit in the art world. ... That’s how it would fit into folk life, too. That type of talent can indeed be passed down to future generations.” 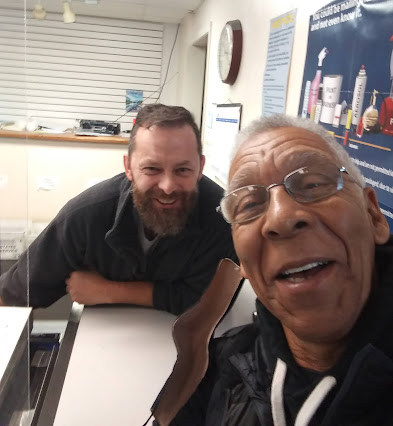 Stacy Kimble is Machen’s apprentice. He has a full-time job, but Machen says he kept asking him questions and needling him in a good way about custom rug tapestry.

“He likes to ask people what they’d like to see in a rug display, and I’ve been teaching him how to pick the right kinds of carpet for the tapestry and how to blend colors. Any color you can see in a picture, you’ll find in a carpet somewhere. The magic is when you size up what you need from the scraps, blend the colors into scenery or an object, trace the outlines and do the cutting. That’s the fun of it. Even if you make a mistake, you don’t throw away the mistake. What’s left might work in another design.”

“WE HAVE TO KEEP THE CYCLE GOING”

The Tennessee Arts Commission’s Folk Life Apprenticeship program provides incentives for participants as encouragement to follow through with the six-month program. Master artists receive an award of $2,000 and apprentices themselves receive $500. They also receive supplies and mileage. Administrators are always on the lookout for noteworthy occupations and pastimes that came from our ancestors that people are doing and need to be passed on. 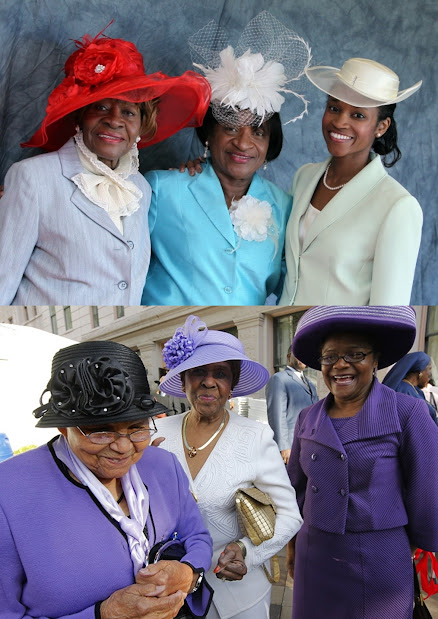 “In the program this year, in addition to Jerry and LaVonda, we also have an African-American woman who designs and makes those lovely church hats for women to wear to Sunday services. It’s amazing that in the same year, we have one woman who designs hairstyles for African-American women and another who makes the beautiful hats that they wear to church. In another year, we had a shoe cobbler from Memphis and a man from Soddy-Daisy, Tennessee, who designs and carves carousel animals.”

(It turns out that Bud Ellis’ handiwork is displayed at the Kingsport Carousel and at Coolidge Park in Chattanooga). 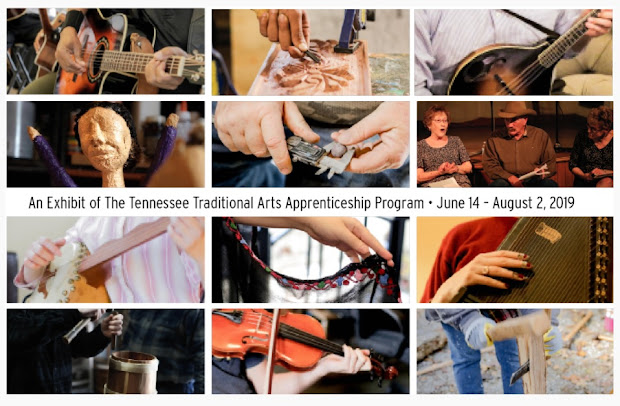 At the end of the program in June, masters and their apprentices are invited to display their talents at a gallery exhibition in Nashville.

“We didn’t have one last year because of COVID-19,” says Hansen, “but we are hoping to bring all of these talented people to the state capitol this year to celebrate their crafts. Part of the program is getting the word out about what they do in a public display. It also helps us to discover new legacies that have been quietly passed down.

“In the short term, the master artists and the apprentices get money, but the program is more than just that,” he says. “Long term, we want to select people that we think will have staying power and hopefully the legacies will live on forever.

“We have to keep the cycle going,” he says. “It’s important to Tennessee, it’s important to the master artists who are passing down what they themselves learned, and it’s extremely valuable to the apprentices continuing the legacy.” 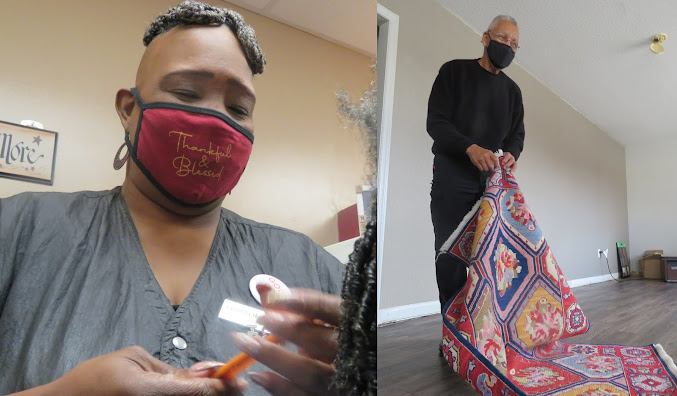 In Kingsport and Upper East Tennessee, the passing of the torch continues.

“The program is pretty incredible,” Machen says. “It’s a great honor to even be considered a master artist with a talent to pass on.”

Harris-Price agrees. She’s proud to get the word out about both her and Jerry’s crafts during Black History Month. “Ours are two African-American legacies that have to be taken up by the next generation,” she says.

“It’s what makes us unique as people.”

Posted by douglassriverview at 10:34 PM