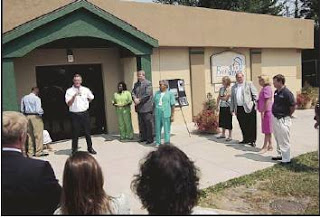 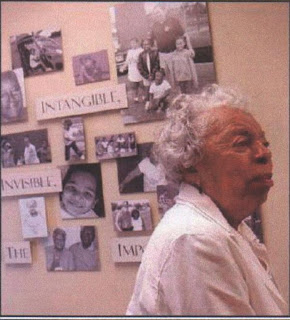 Nora M. Taylor Alexander, the original owner of the building in the 1950s, looks over the new Fresh Start hallway.

KINGSPORT — A notable landmark in the Riverview community and recent trouble spot for the Kingsport Police Department has been transformed into a new facility that aims to help local residents achieve home ownership.

“The purpose is to provide our residents access to intensive case management on an individual, household basis, to look at what challenges and barriers they may have, and to help them move toward self-sufficiency,” Catron said. “We try and see what services are available to meet the needs that residents have.”

“We do an overall assessment with each family, and then we look to see how we can facilitate those services that are available with service providers who have agreed to work with the HOPE VI project,” Catron said.

The building housing the Fresh Start office has had a more than 50-year history in the Riverview community. The building began as a Dairy Mart in the mid-1950s, then changed to Harvey’s and later to Club 229. The Kingsport Economic Development Board purchased the building in 2006 for $200,000 after a shooting.

Over a three-year period, the club had been a trouble spot for Kingsport police, including two reports of shots fired, five shootings, one rape, seven assaults, seven disturbances and three reports of disorderly conduct.

Mary Beatty, president of the Riverview tenants organization, is pleased with the change in the building.
“It’s a lot better than what it used to be because you didn’t know whether to sit on your porch or go in the house because bullets don’t have eyes,” Beatty said. “That was the way it was before HOPE VI got it.”

Last October, the U.S. Department of Housing and Urban Development awarded the KHRA an $11.9 million HOPE VI Revitalization grant. In addition to funding the creation of the Fresh Start office, the money will be used to build new mixed-income housing units in the following manner:

• Replacing the 92 public housing units at Riverview Apartments with 32 homes (24 singlefamily houses and eight duplex units). Relocation efforts are expected to be complete by year’s end, with demolition beginning early next year.
• Building 24 affordable home ownership units in the Sherwood/ Hiwassee area. Demolition and construction are scheduled to begin this fall.

Catron said more than 100 families from the Riverview and Sherwood/Hiwassee area are enrolled in the HOPE VI program. All of the residents from Sherwood and Hiwassee have been relocated, and demolition should begin soon. Around 30 families in the Riverview community are slated to be relocated by Christmas, with demolition work beginning next year, Catron said.
The relocated residents have gone to other private rental units, other public housing units or to Section 8 housing, Catron said.

After demolition takes place in Riverview, a new development on Lincoln Street would take place to house satellite offices for the Boys and Girls Club, the KPD substation, the Weed and Seed office, and Carver Library — all of which are currently in the Riverview Apartments complex.
Posted by douglassriverview at 10:45 AM