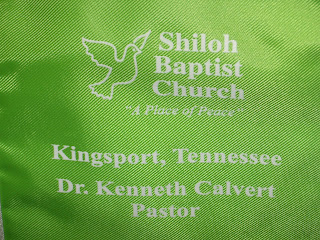 MORE PHOTOS OF SHILOH'S VISIT IN THE PHOTO GALLERY 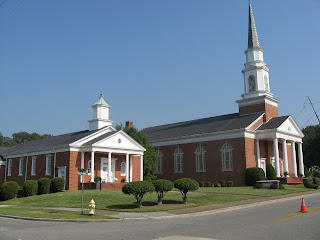 On the occasion of the Pastor's 39th Anniversary, the Shiloh Baptist Church Family from Kingsport were the guests of the New Monumental Baptist Church in Chattanooga, Tennessee.

Dr. and Mrs. Virgil J. Caldwell were honored for their 39 years of church service, and Pastor and Mrs. Kenneth Calvert and the Shiloh Church Choir were featured in the 11 AM service at New Monument.

Even in the Time Of Jesus, our Savior Preached The Word through many difficult times. Centuries later, the power went off in the Brainerd neighborhood in Chattanooga on this Sunday, and with that went the lights, sound system and air conditioning at New Monumental. But that did not stop the Word Of God from being spread effectively by Reverend Calvert, or Songs of Inspiration being sung purposefully by the Shiloh Choir. At the conclusion of the service, Dr. Caldwell commented that, without the amplified sound system, he was returning to a time in the Bible of the Preachings from the river side into the wilderness, "and the faithful Heard the Word and came down!"

The anniversary witnessed by Shiloh, also featured many other testimonies and musical selections, including a moving saxaphone solo "I Know You By Heart," performed by Ryan Caldwell, one by Dr. Caldwell's grandsons, and an inspirational selection on the drums by his youngest grandson, six year old Christopher Caldwell Drake.
Posted by douglassriverview at 3:40 PM