It was the day the ground shook in Riverview for about 3 seconds.

And then.. the earth stood still. 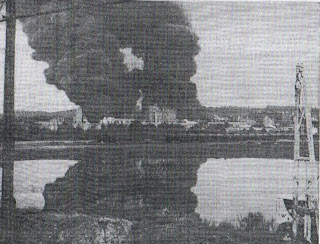 The blast shattered our ears, the concussion a half-second later knocked us to our feet, windows broke, bricks flew, some residents ran outside screaming for their children, others walked away silently through the Underpath as one Riverview observer noted, "like Pharoh's Army," and all eyes looked toward the Eastman.

47 years ago on October 4th, 1960, one plant at Tennessee Eastman exactly halfway between Wilcox Boulevard and Eastman Road blew up, and it forever changed the way one neighborhood looked at its nearest neighbor.

That neighborhood was Riverview.

Riverview is the Kingsport neighborhood that was nearest to that formidable Eastman plant, formerly located less than 1,000 feet from the intersection of Wilcox Boulevard and Industry Drive, along the Holston River. Riverview was the neighborhood that sustained the most property damage off-site, and also the neighborhood whose residents remember the most about the chaos that resulted from the explosion.

Their emotions are recounted in several exclusive video interviews to be posted on October 4th in the PHOTO GALLERY, under "Riverview Remembers the Eastman Explosion." Experience the fear in their voices, minds straining to remember the day, the hour, the moment the earth shook beneath their feet. These interviews will move you, as our people take a trip back, to a time many of them would like to forget.

Our Riverview folks were evacuated at first, then, were not permitted to leave the neighborhood in their cars, because of all the emergency vehicles blocking the roads.

So what caused this catastrophy, this tremendous loss of life, this dramatic altering of our every day lives?

The answer is simple.

By its very definition, Aniline dye is dangerous. In doing research for this article, I found out, to make Aniline dye industrially as Tennessee Eastman did, it's made in two steps from the chemical BENZENE.

BENZENE is heated to 140 degrees F, with a mixture of NITRIC ACID and SULFURIC ACID. The resulting reaction produces NITROBENZENE. The gaseous vapors from that reaction are mixed with hydrogen gas and heated to 1,100 degrees with a nickel catalyst to enhance the reaction. The result is ANILINE, from which red dyes and blue dyes are made from. It is a highly acrid oily poison, smelling like rotten fish. It ignites easily and burns with a smoky flame. It is toxic to inhale, absorb through the skin, or swallow. It causes headache, drowsiness, cyanosis, mental confusion, and convulsions (this information from Wikipedia.org). 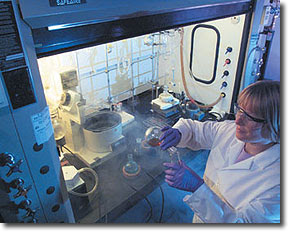 That being said, Aniline dye was produced by Tennessee Eastman for the production of DYESTUFFS. Remembering that Riverview itself was built on the former site of the Federal DYESTUFF and Chemical Corporation and the resulting chemical dumpsite.. is it any coincidence that ANOTHER dyestuff plant was within a stone's throw of Riverview?

Nonetheless, Tennessee Eastman's Aniline Plant violently exploded shortly before 4:45 on the late sunny afternoon of October 4th, 1960. The blast killed 15 Eastman employees, severely injured 60 others, slightly injured dozens of other workers, and instantly became one of the deadliest and ugliest explosions in the history of the State of Tennessee.


TOMORROW: Many Riverview husbands, fathers, brothers and uncles were working at Eastman when the Aniline plant blew up.
Most are gone now, and the few that experienced the actual explosion, don't like to talk about it.

In this column tomorrow, you'll hear from a chemical technician who knew exactly what chemical reactions were going on inside the Aniline Building.

On his way home, he felt the Earth shake, and later found out the Eastman had exploded. He immediately got a sinking feeling in his
stomach.

Nobody had to tell him.. he knew it was the Aniline Plant.
Posted by douglassriverview at 10:26 PM