Part Three: The Tennessee Eastman Explosion.. I Worked Inside The Plant That Blew Up!

THIS PHOTO IS FROM THE WILCOX DRIVE BRIDGE OVER THE HOLSTON RIVER..HUGE PLUMES OF SMOKE RISE FROM THE EASTMAN ANILINE PLANT THAT HAS JUST EXPLODED. THIS PHOTO FROM OCTOBER 4, 1960 IS COURTESY THE KINGSPORT TIMES. 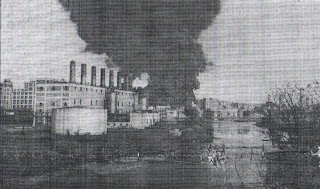 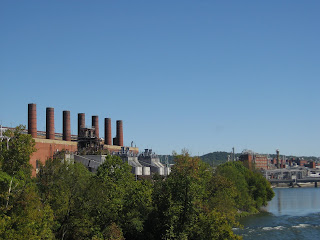 THIS PHOTO OF THE SAME AREA AT THE FAR RIGHT, WAS TAKEN SEPTEMBER 30, 2007

Perhaps it was your father working there.. maybe, it was your husband. It could have also been your brother, sister, brother-in-law or sister-in-law, aunt, uncle, niece or nephew. Maybe, it was just a good friend of yours. In my case, it was Papa Sneed.. his job as a General Foreman took him all over the plant.

In Riverview, everybody knew somebody that was working at Eastman the day it blew up.

Most of those African-American workers are long gone, but the memories they told us about, live on.

The following recollection is from Harold Manis, Dobyns-Bennett Class of 1950, who sent an account of the fateful day of the Tennessee Eastman Explosion to the "D-B Newsletter" in December of 2005. It is that publication that we credit Mr. Manis' following account:

"The (Tennessee Eastman) Aniline Plant was built more than three years before that explosion," he wrote. "As an instrument tech, I happened to have been in the project from its beginning.
I was told that Dr. (Paul) Von Bramer would not allow this plant to be built while he was in charge. He knew the (chemical) process was dangerous. I was also told that hot nitric acid, mixed with benzene went through a molecular struction that was very close to nitroglycerine.
The initial plant start up three years earlier, lasted only about a week. Suddenly, there were leaks everywhere, which caused an immediate shutdown (of the plant). We took the valves apart, and their insides looked like porous balsa wood (although they had been made of stainless steel). At that time, the (Eastman) machine shop remade the valve bodies, stems, seats, pump bodies all out of titanium.
Until that fateful day, October 4, 1960, the plant had always been started at night, when the least number of workers would be present. THAT day, it was started at 11 A.M., the first time for a daytime start up.
With other shutdowns, everything had been rushed, but on this particular shutdown, everything was checked and tested. Around 3 P.M., we were asked to check on a liquid level instrument. We found it to be O.K.
It was about 4:15 P.M. when I asked Usif Haney, who was in charge of the building, if he needed us to stay over after hours. His answer was 'everything looks good, go on home.. if I need you, I will call you.' I can still see him leaning against one of the handrails when he said that.
I was sitting at a traffic light at the intersection of Center Street and East Sullivan Street, looking at the drug store on the corner when the explosion occured. A lady was walking out of the door, and had only taken a couple of steps, when the large plate glass window blew out just behind her. My car also shook.
I turned the car around and drove back to the hill overlooking Eastman from Borden Mills. It only confirmed what I already knew in my mind.
It was the Aniline Plant.
A friend of mine had just purchased fog lights for his car and had bent down to put them under the passenger's seat when the blast came. Had he been sitting upright, a piece of pipe about a foot long, came through the passenger window and would have hit him in the head.
A co-worker of a friend of mine, had just came out of the building. He was in the open and was killed.
Another friend was also caught out in the open, and was killed by flying debris.
A pickup truck was pinned to the ground by an H-beam near the Long Island bridge.. a 300-gallon tank wound up UNDER the Long Island bridge.
Overhead pipelines running next to the building had been broken and caught on fire. They threw out a flame for about 25 to 30 yards. It looked like a gigantic blow torch. This was the hydrogen from the storage tanks.
The Aniline Plant was never rebuilt, and the question still remains "WHAT HAPPENED?" The only people who could probably answer that question were the two men that were inside the building when it blew up. It's possible that they THEMSELVES never knew."

On November 10th, a brief story in the Kingport News included a news release from Tennessee Eastman, stating the blast may have been caused by "the detonation of a mixture of nitro-benzene, nitric acid and water."


****TOMORROW: "After the big BOOM, parents came out of their homes, calling for
their children, and quickly gathering them up..."
"The people slowly marching out of Riverview after the explosion was
like Pharoh's Army..."
"It was the first time I ever saw my father cry..."

In this column tomorrow, hear first-hand what the people of Riverview
felt, after the Earth shook from the Eastman Explosion.
Then, go to the PHOTO GALLERY and click on "Riverview Remembers the
Eastman Explosion" icons to hear all their testimonies in person!
Posted by douglassriverview at 10:19 PM