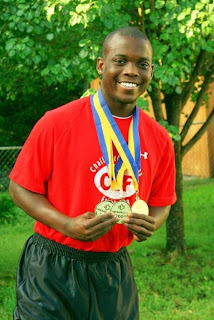 SYDNEY, Australia—Team USA athletes took to the track at Sydney Olympic Park on Friday night for their final tune-up meet in the lead up to the 2011 International Paralympic Committee (IPC) Athletics World Championships.

Competing against athletes from six other countries, the 51 Americans preparing for next week’s world championships in Christchurch, New Zealand capped a week-long training camp with multiple personal best performances.

Blake Leeper (Church Hill, Tenn.) looked sharp in the men’s 100m (T44), dropping a personal best time of 11.08 seconds. “I’ve been living and training at the U.S. Olympic Training Center in Chula Vista since December and this showed that all my work and training are paying off,” said Leeper. “I felt great tonight and after this I feel confident and ready to go for world championships.” Leeper is making his Team USA debut at these world championships and will take on some of the sport’s top competitors in Christchurch. Leeper will face-off against South Africa’s Oscar Pistorius and his U.S. teammate Jerome Singleton (Irmo, S.C.), who won gold and silver medals, respectively, in the 100m at the 2008 Paralympic Games.
Posted by douglassriverview at 11:38 PM