Sign of the Times: Knoxville Has First African-American Mayor

THIS STORY COURTESY THE KNOXVILLE NEWS-SENTINEL: 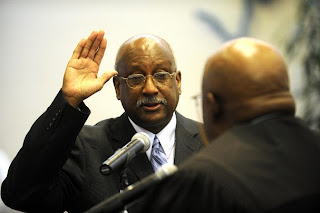 He succeeds outgoing Mayor Bill Haslam, who resigned his position at 9:32 a.m. to become governor. He will be inaugurated on Saturday, Jan. 15.
"My challenge will be to serve in the best way possible for all the citizens of Knoxville," Brown said after he was sworn into office. "I thank my colleagues whether they voted for me or not."


He noted that being the city's first black mayor was of special significant with the celebration of Martin Luther King Jr.'s birthday coming up.
"This is going to be a temporary thing," Brown said. "As long as I have a good relationship with council," Brown said, he could do the job. "I plan to be fair and just with all elements of the city."
He said his first step would be to meet with all department heads, then he will begin work on the budget, which is presented in the spring. 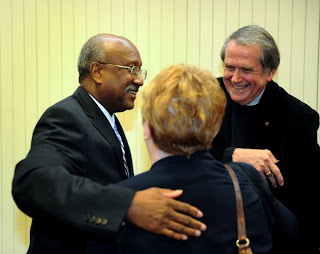 Brown was one of five candidates vying for the position. All declared before the voting began that they would serve as a temporary mayor until Dec. 17, when the next elected mayor is sworn in, and that they would not run for office.
Brown was sworn in on the 11th round of council voting. Then, at Councilman Nick Pavlis' request, the council took a 12th vote to unanimously elect Brown as interim mayor.


Brown's biggest competition came from Councilman Duane Grieve. Both councilmen kept getting three or four votes apiece throughout much of the voting until, in the final round of voting, Councilman Joe Bailey voted for Brown instead of himself.
The council was required to elect an interim mayor from among its own ranks, Five votes were needed for a majority of the nine members. 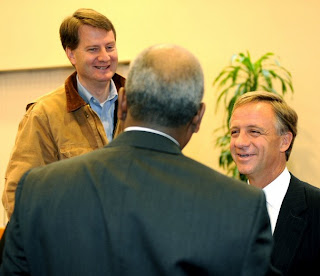 John Stancil, a neighborhood activist from Brown's own neighborhood of Park Ridge, said, "It's a perfect example of democracy at work."
Added Rachel Craig, observer for the League of Women Voters, "This is a wonderful example of our democratic process. The meeting was conducted with dignity and civility."


It took about 20 minutes and a series of 11 votes before Brown - a 6th District councilman for the past 13 months - received a majority of votes from his peers to be named mayor. Five council members - Brown, Becker, Marilyn Roddy, Chris Woodhull and Bailey - selected Brown in the 11th round of voting. In previous rounds, Brown and Grieve of the 2nd District each received the most votes but fewer than the necessary five.

An interim mayor election was necessary because Knoxville Mayor Bill Haslam was elected governor in November. The city charter requires the council to elect an interim mayor from among council members to serve until the next mayor can be elected in the fall of 2011.


Brown, a native Knoxvillian and graduate of Austin High school and Tennessee State University, is retired from the U.S. Postal Service. He's also a Vietnam War veteran.  He is serving his first term on City Council, having been elected in the fall of 2009. His district includes East Knoxville, downtown, Mechanicsville and part of Sutherland Avenue.   Brown also is a member of First A.M.E. Zion Church and is a past member of the Knox County Board of Zoning Appeals.

Five council members had had their eye on the interim mayor's position. In addition to Brown and Grieve, an architect, the list of interested mayoral interim servers included Brenda Palmer of the 3rd District (Northwest Knoxville); Bailey, an at-large councilman, who has a marketing and governmental affairs consulting firm; and Woodhull, an at-large council member and former executive director of Tribe One, a Christian ministry to inner-city youth. 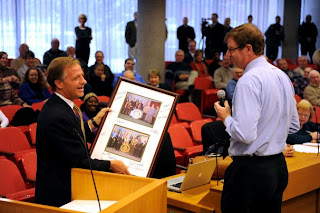 Haslam has stayed out of the interim mayor selection, not endorsing any candidate.  Council members Roddy, Nick Pavlis and Nick Della Volpe decided not to seek the appointment. Roddy is running for mayor in the fall elections and said she withdrew her name from consideration because she didn't think the next mayor should have the advantage of having served as interim mayor for almost a year.  Pavlis initially said he was interested, but withdrew his name because he said he needs to concentrate on needs in his South Knoxville and Fort Sanders district.