Douglass Teachers: A "Bench Mark" to a New Generation

For years, teachers at Douglass Elementary/High School in Kingsport supported their students in the best way they knew how.

Two generations later.. they're still doing it. They're giving us a shoulder to lean on. 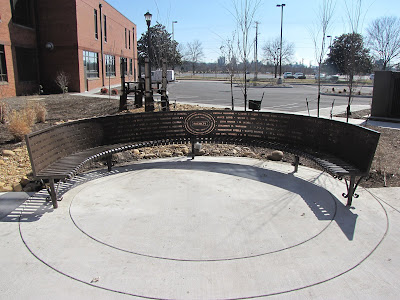 The names of all of the Douglass teachers have now been immortalized in a wonderfully crafted iron bench at the V.O. Dobbins Sr. Complex in Riverview.

To see a slideshow of the Douglass Teachers Bench, please click here.

"The bench is to celebrate the teachers of the school," says Bonnie Macdonald, Cultural Arts Administrator with the Arts Council of Greater Kingsport. "The name of each Douglass instructor is carved into the steel supporting your back, and with a shiny metal backing, the names stand out to be recognized when you look at the bench."

"None of us, black or white, would be here without the inspiration of the teachers in our lives. The people of Riverview and the alumni of the Douglass School have made it known, their teachers were among their greatest inspirations." 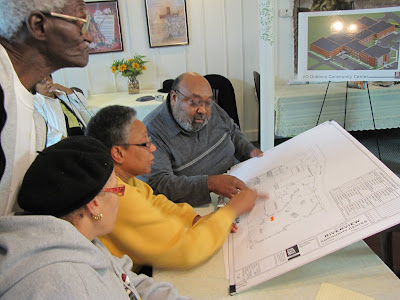 In fact, it was at a Riverview community meeting in October of 2009 where the idea to honor the Douglass teachers first surfaced.

"It was mentioned during one of the discussions that the community would really like to see some kind of honor bestowed upon the teachers at Douglass, and for that to be incorporated into the renovation of the V.O. Dobbins Community Center somehow," Macdonald says. "When we came away with all these ideas, that one stood out, and at the time, we had no idea how to make that suggestion come true. We couldn't figure out a way to put idea to paper."

"We never forgot about it, though." 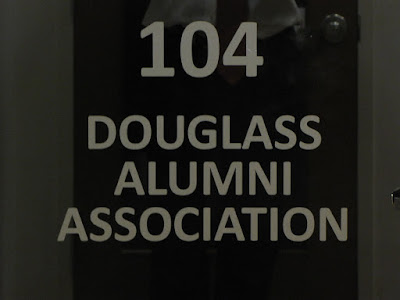 The "Sons and Daughters of Douglass," a.k.a. the Douglass Alumni Association of Kingsport was helpful in the project. The organization gathered the names of all the teachers, put them in order, and provided that to the arts council.

"Any teacher hired by the city, has to be approved by the (Kingsport) Board of Education," says webmaster Calvin Sneed, "and that notation is included in the minutes of every board meeting. I spent a day going through board meeting minutes from 1928 on, and reading where a teacher was hired to teach at the Douglass School. I made copies of the notation, and cross-referenced that with Douglass school annuals, to make sure everybody got included."

Once that job was complete and the names provided to the Arts Council, the next phase of the project began. Kingsport's Public Art Committee had placed several steel and metal sculptures around town, but sculptor John Robinson at Appalachian Ironworks had been racking his brain trying to come up with something visual to memorialize the Douglass teachers all in one group. 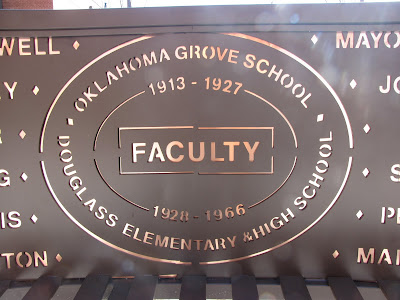 "A moment of inspiration came to John," Macdonald says, "when he was looking through one of his resource books and saw another project that had memorialized names and he remembered how they did that. From that, grew the idea for a bench, a steel bench with the teachers' names etched into the back that people lean against. His feeling was, if there was reflective metal behind the names, they'd stand out, and the idea that former students could still lean on their former teachers for 'support' for many more years to come."

"What resulted, came from two months of planning, after tons of research." The bench was made by Robinson at Appalachian Ironworks for $8,000, which included the design, the metallic shine behind the lettering, the interfacing and the actual steel. It is a 15-foot diameter semi-circular bench of powder-coated steel, permanently installed into a concrete foundation. It was mounted on steel beams and metal poles set into the base, in the courtyard just outside the door of the Douglass Community Room at the V.O. Dobbins Sr. Complex. The money to build the bench came from a portion of the funds allocated from the program "Percent For Art," associated with the Dobbins renovation. Kingsport has a city ordinance that allows a small percentage of funds for a capital project to be set aside and used for art purposes.

Since it is curved into a semi-circle, if it were stretched out to its full length, the bench would measure just over 30 feet long. Robinson used the stencil-font method of etching the lettering into the steel. "It was a unique challenge to get that many letters embedded into the steel, to make sure the names could be read," he says. "It has a nice aesthetic appeal, that people will enjoy over time."

"From the funds provided by Percent for Art, the Public Art Committee was able to accomplish a functional need by providing a bench," Macdonald says, "that, not only you can sit on, but also view as a memorial to the spirit of the Douglass teachers."

People who see the bench will notice that two names of people who were not teachers, were still included on the bench.

"The criteria to be included on the bench, required the teacher to have a teaching certificate issued by the Tennessee Department of Education, and that's what we looked for in the old Board of Education minutes," Sneed says. "But we added the names of Coletta (Coty) Deering and Dorothy Bradley, two of the Douglass School's beloved secretaries. Although not teachers in the sense that they were certified, those two staff members were the backbone in the operation of the school, serving as Professor (V.O.) Dobbins' closest assistants in the performance of their jobs. Oddly enough, two previous secretaries, Jill Ellis and Joyce Long, did eventually earn their teaching certificates, taught at Douglass, and are included on the bench."

"In no way does this diminish the impact of other Douglass School employees on staff," Sneed says, "all of whom played important roles in maintaining school decorum and efficiency." 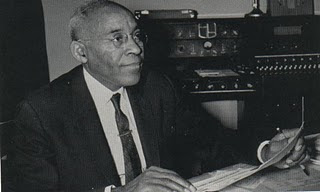 We discovered one more item that showed V.O. Dobbins, Sr.'s love for his school, and his willingness to go the extra mile for his teachers. In researching the names, it was determined that Mr. Dobbins had a knack for hiring teachers, who, at the time of their hire, were attempting to get their teacher certifications, but did not have the teaching certificates yet. This was evidenced by their inclusions in school annuals, but not alongside the other Douglass grade teachers. This was apparently his way of letting them "try out" teaching to see if they could do the job; if they could, he would recommend their full hire to the Board of Education.

"I'm pretty sure that is still being done today, Calvin," Macdonald says. "It sounds a lot like the Teach America program, where they take college graduates in the field of education, and allow them to teach, in order to get experience. Mr. Dobbins and others gave candidates the opportunity to see if they wanted to pursue teaching as a career.. that put them right in the classroom." 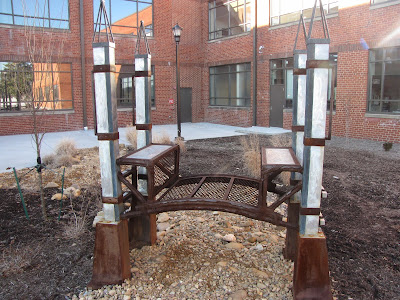 "It's a unique concept where you can see on either side of what looks like a bridge, and we've landscaped it so there's a dry creek bed running through it, and on each side of the bridge, there's a bench. Metaphysically, if you sat on the bench on either side of the bridge, you'd be facing each other connected by a bridge. It speaks volumes of how there can be a link to understanding and how important it is, to keep those thoughts before the public to move forward." 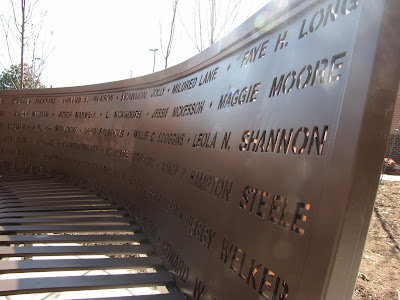 One thing is for sure.. The Douglass Teacher Bench reflects on every instructor who labored behind the desk for the sake of students going into the biggest challenges of their lives.. the Civil Rights movement, gathering steam and moving forward.

"We knew we wanted to do (the bench) to honor the teachers at Douglass," says Macdonald. "It is indeed.. a work of love."

The Douglass Teachers Bench will be officially dedicated, at the Douglass Alumni Memorial Service on July 3rd at 3 PM.
Posted by douglassriverview at 8:08 PM