Sensabaugh goes to Titans Looking to shore up defense


NASHVILLE — Kingsport native Coty Sensabaugh is joining his cousin Gerald in the NFL.

The Tennessee Titans, continuing their focus on shoring up their defense, opened the final day of the NFL draft by selecting Coty Sensabaugh with the 115th overall pick. 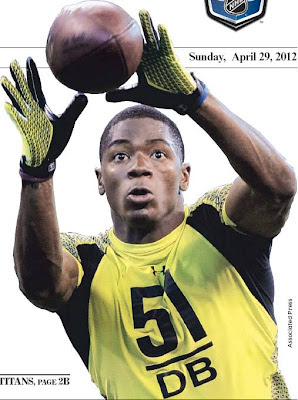 Sensabaugh, a cornerback who played for Dobyns-Bennett High School and Clemson University, had 87 tackles and four interceptions along with two quarterback pressures and 18 pass breakups over 52 career college games. The 6-foot, 185-pounder had a team-high 13 pass breakups in 14 starts and played a school-record 993 snaps as a defensive player last season.
Sensabaugh graduated last May.

The Titans let cornerback Cortland Finnegan leave as a free agent, so they needed more depth at cornerback with four draft picks remaining Saturday. Sensabaugh will join a group competing to fill that spot as a starter.

“When we lose some players like we did this year, we didn’t panic and jump out and try to fill it by signing a free agent and replace a guy because we lost a guy,” coach Mike Munchak told The Associated Press. “I think our philosophy was that we thought we were happy with what we had in house ... We just felt this is a guy that would come in right away and help us in a lot of ways.”

Sensabaugh is a second cousin to Dallas safety Gerald Sensabaugh, the two growing up on the same street together. Titans secondary coach Brett Maxie coached Gerald with the Cowboys and said he sees similarities between the men in their intelligence, football knowledge and speed.

“He taught me everything I needed to know about this process,” Coty Sensabaugh said of Gerald. “He gave me a lot of advice and walked me through everything step by step.

“He and my agent and my friends who are in the NFL, I got a lot of help from a lot of people.”

Coty Sensabaugh played early in his career at Clemson in passing situations and defending receivers inside. But he started as a senior on the outside, and Titans college scout Cole Proctor pointed out that Sensabaugh allowed South Carolina receiver Alshon Jeffery, the 45th pick overall by Chicago, only one catch in a game last season.

Maxie said Sensabaugh will have the opportunity to play inside and outside because he is smart enough to learn q u i c k l y.

“The fact that he is such a smart football player, you are not as worried about moving the guy around because he can handle it,” Munchak said. “He has already done it and been a good football player in a good system.”

Trying to boost a unit that ranked eighth in the NFL in points allowed but gave up yards in bunches, the Titans pulled five of their seven picks this year from the defensive side of the ball.

Taylor Thompson — who played defensive end most of his career at SMU but entered the draft as a tight end — was taken in the fifth round with the 145th overall pick to break up the Titans’ defensive string.

The Titans sent their 155th pick in the fifth round along with the No. 227 selection in the seventh to Miami to move up 10 spots and take Thompson. They sent their sixth-round pick in 2013 to Minnesota to get Solomon.

Posted by douglassriverview at 11:07 AM