I believe it was worth it being over there


For Riverview's Dimingo Hale, it was a spiritual calling that went with him to serve in the U.S. Armed Forces in the Middle East. 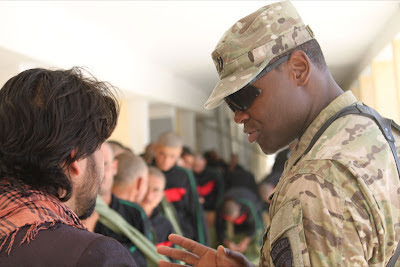 "I always felt it was part of my calling to go out and minister to people," he says. "As long as I'm shining the light, building positive relationships, it's always worth it."

Capt. Hale left Riverview in 2003, he was an enlisted soldier sent to Iraq, and his tremendous work ethic got him promoted to an E-5 sergeant. He went on to become an officer around 2006, and by the time he was deployed to Afghanistan, Hale had earned the rank of officer. Then came First Lieutenant, and by the time he returned home to Kingsport in March, he had been promoted to Captain.

"I worked hard to get the rank of Captain," he recalls. "A lot of people don't make it through for whatever reason. It's a lot of responsibility in a company of about 200 soldiers." 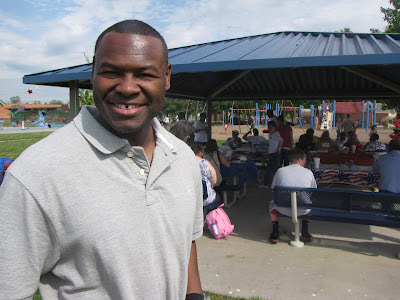 Recently, Captain Hale sat down with the Douglass website, to celebrate his homecoming, at a party organized by his wife Sarah in the Dobbins-Douglass ballfield.

"I feel at ease now that I'm home," Capt. Hale says. "I feel blessed that I am home with all of my limbs, because a lot of people over there are going through a lot of stuff, be it combat stress or some kind of injury from and IED or explosive device. My heart goes out to them, and I pray every day for their safe return."

Capt. Hale's thoughts on being home, are not wasted on wife Sarah or sons 9 year old Malachi, a student at Jackson Elementary, and 4 year old Michael, who is in pre-K.

"Having him home is great for our home life in general," Sarah says. "With all the dangers over there, it's definitely been a faith-increaser. You just lean on God that much more. It was difficult, not knowing what he was going through day-to-day. It was that unknown."

"I praise God every day that he made it back safely." 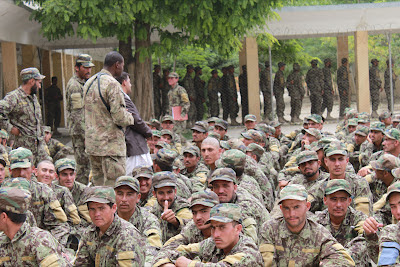 "They did a study on military spouses," says Capt. Hale, "and found out the spouse at home had a harder time adjusting to the separation, with paying the bills, taking care of the kids, keeping the household, the kids and school, plus after-school, compared to what the spouse is doing overseas. Soldiers are constantly watching their backs when they go out on missions. When we return to base, it's pretty much safe and we can get on the internet and find out what's happening at home, either through our families or through the Douglass website. It's survival on both sides, but the survey showed that spouses at home have more of a hardship than their military husbands and wives overseas."

"I've always been a day-shift nurse at Wellmont, and I had to change my schedule up to do part-time whikle he was away. That way the boys wouldn't miss me AND him. I could work a lot while they were sleeping. There could have been a time when the boys would not have seen either one of us, if I hadn't changed my schedule." 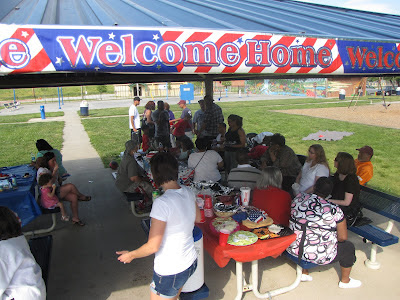 The "Welcome Home" party that wife Sarah planned on April 14, 2012 went off without a hitch.


"I love planning parties," she says. "Many phone calls, sending out invitations, a lot of people piecing together things that I delegated. It was definitely a family and friends effort. I couldn't have done it without them."

Dozens of people attended the party, with dozens more just stopping by during the event to welcome Capt. Hale home. There were other family members, friends, church members, former school mates.. even enlisted fellow soldiers. Folks were treated to games like a one-legged race, easy question-and-answer sessions, and a game similar to musical chairs, but was more like musical food. 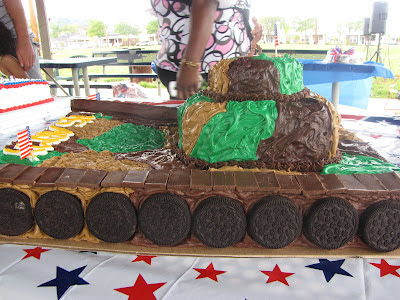 Speaking of food, one of the party highlights that got a lot of attention were a couple of cakes with military themes. One was a cake with a tank on top of it.. it received rave reviews from the crowd, and the other was a cake baked to look like an American flag.

The cakes were specially designed for the occasion by Karissa Deal, Trippy Deal's sister-in-law (email: kidsistercreations@hotmail.com).

"I started planning those cakes a week before the party," she says. "I looked up stuff online to model them after and found pictures that inspired me to put a little creation together."

Karissa says the tank cake was pretty difficult, taking about 4 hours to make. "The hardest part of trying to figure out how to hold it all together, then get it out here all in one piece," she laughed. "If it wasn't put together right, any little movement and it's gonna all slide apart and look horrible by the time it gets to the destination. Luckily everything worked out all right."

Karrisa makes specialty cakes for birthdays, baby showers and other community events and says, the tank was the most elaborate she'd ever made.

"Oh I loved the cakes," Capt. Hale says. "My wife and her friends did a good job. It's no wonder everybody always wants her to design parties for them."

THE ONE-LEGGED RACE AT THE PARTY; DIMINGO & SARAH ARE IN THE MIDDLE OF THE GROUP 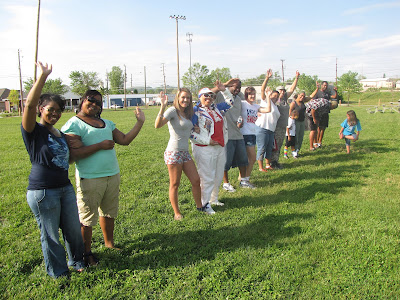 Captain Hale says he can appreciate life in Riverview now that he has seen what sometimes could be the dark side of human nature.

"Over there, there's war," he says somberly. "Here at home, there's no war. Over there, you watch your back constantly. We had 22 different nations there supporting the War on Terror, but you still had to watch your back. But at the same time, it was rewarding over there, meeting people representing peace and democracy working with the Afghans. The majority of the people over there are grateful that we are there helping them get their country back on track. Only a small percentage of people there wants us out and would do us harm, but we learned quickly they are very determined to carry out their terror missions. Watching your own back and those of your fellow soldiers was essential." 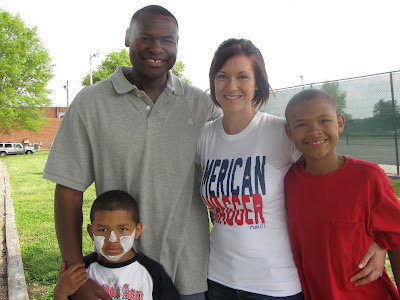 After a distinguished career in the military, what's next for Captain Dimingo Hale?

"I'm going to try and settle down for the next few weeks," he says. "Then I want to go back to my civilian job as a counselor. I work for Youth Villages, helping teenagers and their families cope with everyday pressures. I'm looking forward to actually getting back to that job, because it is so rewarding."

For the Hale family and friends, the welcome home party was the kickoff to a new life of ease and comfort.

"It's great having him home," Sarah says.

"He's the missing link in our family."

Posted by douglassriverview at 2:00 AM