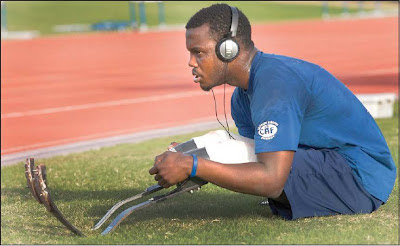 Born without legs from the knees down, Kingsport native and 2007 Dobyns-Bennett graduate Blake Leeper has been in Chula Vista, Calif., for almost 18 months now training for the 2012 Paralympic Games in London. PHOTO FROM JAMES CASSIMUS/OSSUR US


Blake Leeper may have been born without legs from the knees down, but he has never let his disability hold him back.

In fact, although he has worn prosthetics since he was 16 months old, Leeper doesn’t even think of himself as someone with a disability.

Crediting his parents, Billy and Edith Leeper, with giving him the strong mind-set he still possesses today, Leeper says he learned at an early age to believe he was no different from anyone else.

“They showed me that regardless of my situation, I should never give up. Life is hard, but you can take hold of it and look at the glass as half full instead of half empty. Just roll with the situation and make the best of it,” Leeper said.

And making the best of his situation is exactly what Leeper is doing right now.

The 22-year-old Kingsport native and 2007 Dobyns-Bennett High School graduate has been in Chula Vista, Calif., for almost 18 months training for the 2012 Paralympic Games in London.

Leeper will head to Indianapolis in late June to compete for a spot on the U.S. Paralympic Team. He will compete in the 100-, 200- and 400-meter races.
“We are definitely in competition level right now. I’m trying to get in as many competitions as I can before the U.S. Trials in Indianapolis. You have to place in the top three in your events to make the team,” Leeper said.

Currently, he holds the nation’s No. 1 spot in all three events.

“So, knock on wood, if I go there and do what I should, it should be a sure thing to make the team,” he said.

Leeper first discovered his passion for sports when he was only about 5 years old. It was his older brother, Kris, who inspired him.

“Everything he did, I had to do, and do it better,” Leeper said. “My dad always coached us growing up. Anything (Kris) decided to play or even thought about playing — from rollerblading to basketball or baseball — I wanted to do it, too, and I wanted to be just as good as him. I looked up to him and wanted to be on his level, but in the process this was making me a better person and a better athlete.”

At Dobyns-Bennett, Leeper played right field and second base on the baseball team as a sophomore. He commanded media attention by making the varsity basketball team — the nation’s winningest high school basketball program — as a senior. Leeper was selected to the sevenmember Times-News Elite basketball team in 2006-07.

However, Leeper’s interest in track and field didn’t begin until after his graduation from high school. He thought he was done with sports then. But the urge to compete still pulled at him, and he soon discovered track and field.

The major turning point in Leeper’s life came when he discovered a special kind of prosthetic he calls “Cheetah Legs.” Cheetah Legs are manufactured by the prosthetic company Ossur.

According to Ossur’s Web site, Cheetah Legs capture the running characteristics of the world’s fastest land animal — the cheetah — and replicate the big cat’s hind legs with a foot that extends and reaches out to paw at the ground while the large thigh muscles pull the body forward.

Just four months after getting his first pair of Cheetah Legs, Leeper ran his first race in Oklahoma and found himself at a crossroads. At the time, Leeper was in his fourth year of a fiveyear program in applied physics at the University of Tennessee, but he was presented the opportunity to move to California and train for the 2012 Paralymic Games in London.

Although his mom was upset at first because he was moving so far away, Leeper says he knew the move to California was a once-ina-lifetime opportunity.

“Not too many people are able to get into the program. They only take the lead athletes. If you can get in, you should take advantage of it,” he said. 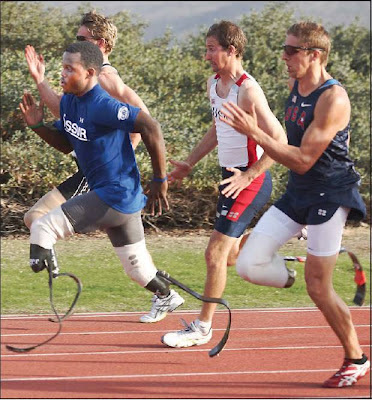 Kingsport native Blake Leeper will be going to Indianapolis in late June in his bid to make the U.S. Paralympic Team. He will be competing in the 100-, 200- and 400-meter races. Currently, he holds the nation’s No. 1 spot in all three events. PHOTO FROM JAMES CASSIMUS/OSSUR USA

Today, the Paralympic Games are elite sport events for athletes with a disability, emphasizing the participants’ athletic achievements rather than their disabilities.

The Paralympics have grown considerably since those early years. The number of athletes participating in Summer Paralympic Games has increased from 400 athletes from 23 countries in Rome in 1960 to almost 4,000 from 146 countries in Beijing in 2008. The games are always held in the same year as the Olympic Games.

This year’s Paralympic Games will be held Aug. 29 through Sept. 9.

“My birthday is August 31st, and I will be turning 23. If I could bring home some medals, that would be a good birthday present. It would make for a hard birthday to top,” Leeper said.

Leeper admits there is a lot going through his mind right now.

“I’ve dealt with all sorts of challenges in my life, and this is just another challenge. It’s bigger, I would say. I’m about to compete to, hopefully, be named one of the best in the world. It’s a different level and a little more pressure, but I feel like I’ve been trained at a very early age by my parents, and I’ll be able to handle it. I’ve gotten more tips from my coaches on how to handle the situation. But, overall, it’s always the same. Nothing changes, just how you deal with it,” he said.

One concern Leeper does have is the crowd.

“Some of my teammates here went to Beijing in the 2008 Olympics, and they said there were about 96,000 people in the stands. The most I’ve seen was 30,000 in the stands in Belgium last year,” he said. “In a large crowd, you can’t point out faces. One of the things I’ve always done is, when I walk out on the track, I try to find my parents. Just seeing them in the stands gives me a sense of comfort, and I can relax a little bit. But in this situation, I don’t think I’m going to be able to find them. The stadium (in London) holds 80,000 people, and tickets are already sold out.”

Advice from his coach is helping to quell Leeper’s anxiety.

“We work on learning how to run our race, regardless of the atmosphere, regardless of the situation. My coach tells me, ‘You know what you have to do. You know what you want to do. Now, just go do it.’ We focus on that each and every day. I want to strive to be on a level where I know I’m going to win. I’ll do what I need to do. There won’t be any stressing about it, no pushing, no hoping for it — just knowing it’s going to happen,” he said.

Leeper hopes his own drive and ambition will inspire others, especially amputees. He says he wants them to be able to find the ability in their disabilities — just as he has.

“If you fall eight times, you must get up nine times,” he said. “One thing that no one can ever take away from you is the will to never give up. They can put a lot of things on you, but you always have the power to push on and move forward. Once you realize that, anything is possible. You can conquer anything as long as you stay motivated, stay dedicated and stay focused. If you do all this, you can achieve anything in life.”

Posted by douglassriverview at 10:44 AM