Survival of the fittest

THIS STORY FROM THE KINGSPORT TIMES-NEWS

KINGSPORT — It was 12 years ago that the world stopped turning for the Sensabaugh family. It’s spinning once again, with a strong gravity pull toward the NFL.
When former Dobyns-Bennett star Coty Sensabaugh was chosen last week in the fourth round of the NFL draft by the Tennessee Titans, he became Kingsport’s highest pick since Hal Miller Sr. was taken in the first round by the San Francisco 49ers in 1952. 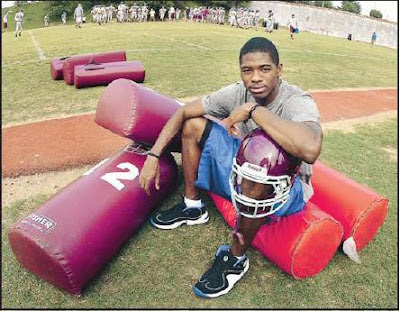 Sensabaugh scored well in the NFL Combine and will likely become an instant millionaire when he signs a four-year contract. He will report to the Titans on May 10 and be represented by agent Christina Phillips.

The Sensabaugh family is steeped in athletic tradition.

Kim, his father, was selected most valuable player in the 1975 Class 1-AAA region basketball tournament as a D-B forward.
Older brother Travis played basketball at D-B before going to Walters State Community College and Gardner-Webb College.
Jamaar, a promising 16-year-old Dobyns-Bennett athlete when he died within days after being diagnosed with leukemia, gave brother Coty a lot of inspiration.
His death proved devastating to the family. Coty, five years younger and always looking up to Jamaar, was deeply hurt.

Coty became a standout in three sports at D-B. His determination to compete was remarkable.

In the fourth quarter of his final football game against Farragut in the state playoffs, he suffered a broken ankle.

Team trainer Kevin Trivette recalls the scenario vividly. “When we brought him to the sidelines, I felt the ankle was broken,’’ he said. “Coty insisted on going back on the field. His head and heart said go but his ankle said no.

“Coty had the heart of a lion. One week after surgery, he sat on a stool in the training room and shot a basketball off the trampoline. He did that for about three weeks until he could stand on his foot. He was getting ready for another sport and joined the team in time for the Arby’s Classic.’’
He was set to play at Appalachian State until a last-minute call came from Clemson. It was his only Division 1-A offer, and he made the most of it.

Sensabaugh broke into Clemson’s secondary rotation as a redshirt freshman in 2008. Two seasons later he was a starter. Last year, he set a school record by being in the lineup for 993 snaps, and Clemson won the Atlantic Coast Conference championship.

“Winning the ACC title was my biggest thrill,’’ he said.

D-B coach Graham Clark said it’s been a success story. “Coty was so smart that they played him at three different positions in the defensive backfield at Clemson.’’

Sensabaugh figured the Philadelphia Eagles would call his name in the third round.

“I’m super happy at being drafted by the Titans,’’ he said. “It’s the last team I thought would draft me. My parents, brother and other relatives will be able to see some games because Nashville is close. Maybe I was preparing myself for the worst, expecting to play far from home.

“It’s a reward for all of us but the family hasn’t treated me any differently. There’s not been much of a change.’’

Sensabaugh, who went 115th in the overall draft, had a 15-minute sitdown interview with the Titans after the Combine.

Tennessee is hoping to shore up its defense. Titans secondary coach Brett Maxie, who had been with the Cowboys, saw similarities between Gerald and Coty in savvy and speed.
“We feel Coty is a guy who will come in right away and help us in a lot of ways,’’ Titans coach Mike Munchak said. “He’s been a good player in a good program.’’

Sensabaugh’s game is speed. There is an opening for him to play immediately in nickel packages — outside or in the slot.

He will wear Titans jersey No. 24. At D-B his number was 9 and at Clemson 15. “That adds up to 24,’’ he said jokingly.
This gives the Northeast Tennessee/Southwest Virginia region eight players in the NFL. Others are Thomas Jones and Julius Jones of Big Stone Gap, Heath Miller of Honaker, Daniel Kilgore and Gerald Sensabaugh of Kingsport, Aubrayo Franklin of Johnson City and Jason Witten of Elizabethton.

Coty visited the D-B campus Thursday and gave the football team a pep talk during its spring practice. “Hopefully, I can motivate someone else to chase their dreams,’’ he said.

While at D-B, he was a consensus all-state selection in football after making 48 catches for 915 yards and 14 touchdowns as a senior. He was an all-NET basketball choice who averaged 17.3 points as a junior and became team MVP the next year. He stood out in track and field as well.

Posted by douglassriverview at 10:26 AM