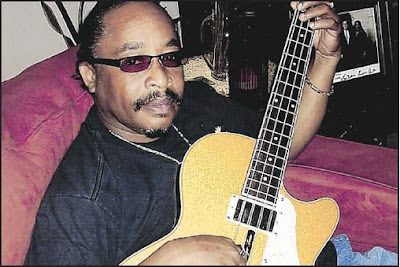 We agreed to meet at the Jan Mar. I was going to write a column about his upcoming performance at Fun Fest. When he arrived, he walked up, stuck out his hand. “Vic Simon,” he said.

“Vic Danger?” I asked with a smile. And we both laughed.

Vic Danger was his stage name, but Kingsport native Victor Simon was a danger only to a bass guitar. Now that was something he could really tear up.

But in his real life, Vic was a sweetheart, a success story who really did want to give back, especially to his hometown.

Victor Simon died in Nashville over the weekend. He was only 59. But what he had packed into those 59 years.

He played bass for Harry Belafonte, for the Drifters and Mary Wells and jazz legend Larry Coryell. He had his own line of signature bass guitars for Waterstone and signature amps for Madison Amp.

He even played at the wedding of President George W. Bush’s daughter Jenna in 2008.
Vic had performed in Kingsport twice in recent years, at Rhythm in Riverview in 2008 and 2011.

Fun Fest Director Lucy Fleming remembers, “After the show was over, he took the time to speak to his fans. He was telling this little guy to mind his momma and stay in school. He was so excited to play this show at V.O. Dobbins Park and to a hometown crowd that really embraced his talent.”

Calvin Sneed, a friend since childhood, said, “One of the things Victor and I talked about a lot was his love of children, and where he felt the children in Kingsport were going with their lives. During the two visits he made to play at Rhythm in Riverview and in phone conversations we’ve had over the years, he told me he was so worried about the kids not getting a good education. During both times he played at home, I can remember him talking about that to the kids who were down front of the stage, and it always caught my ear. He really pushed getting an education and staying off the streets. He remembered the difficult life he had as a child, and how he kept pushing and pushing to be the best he could be. He wanted the kids to push like that and always strive to be better.”

Victor was a trailblazer in Kingsport, the first black member of the Sevier band. He liked to tell the story. He was in the seventh grade at Sevier in the mid-1960s when his older brother talked him into going out for football. “My cousin Tony Horton came running over with his helmet off and a big cut on his lip. He said, ‘You coming out for football?’ I took one look at him and I said, ‘No, I’m going out for band.’ ”

Being in the Sevier band launched his musical career. But he never forgot Kingsport.

“I want young people here to know what they are capable of doing. I feel like I’m highly favored by God. He has thoroughly blessed me. I know the power.

"Get in there and Jesus will get your back.”
Posted by douglassriverview at 2:25 AM