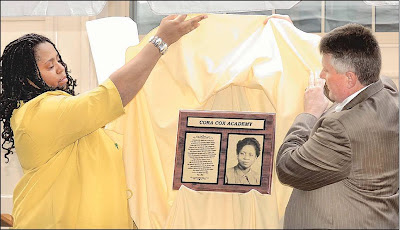 AT LEFT, Dr. Carolyn Kennedy and Kingsport City Schools Superintendent Dr. Lyle Ailshie unveil a plaque renaming the school Cora Cox Academy. BELOW CENTER, Cox is shown with two of her students, in a contributed photo from 1957, when she was teaching at Douglass School. BELOW LEFT, a friend of Mrs. Cox, Leola Newton Campbell remembers and recites Cox's favorite poem during the dedication of the Cora Cox Academy on Friday, August 10, 2012. BELOW RIGHT, Calvin Sneed gives the keynote address for the renaming dedication of Kingsport's Alternative School. 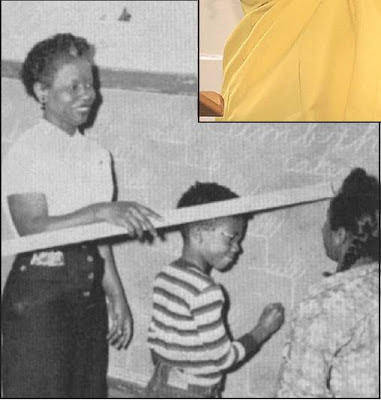 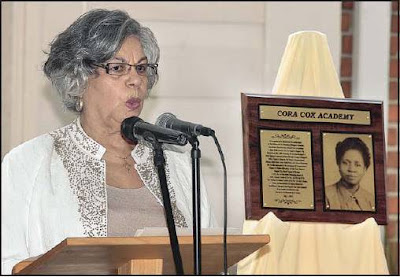 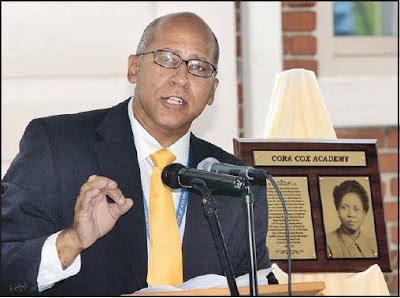 KINGSPORT — Cora Rogers Cox was remembered as a consummate educator Friday afternoon during the dedication of a Kingsport school renamed in her honor.

Thirty years and a week after her death on Aug. 3, 1982, school officials, students and community members gathered for the renaming ceremony and to remember Cox’s education legacy of some four decades.

Click here to see pictures from the Cora Cox Academy dedication. The pictures were taken by your Douglass website editor and Donna Morrisette.

That’s not far from the site of the torn-down Douglass School, where Cox taught from 1944 into the 1960s. Cora Cox Academy will house the KCS alternative education program for students in grades 6-12.

Superintendent Lyle Ailshie said Cox’s “singular focus was on the success of her students,” and she would be perfectly suited for the system’s 2012 vision of a world-class education focused on individual students.

Cox’s service to Kingsport stretched from the end of World War II to the middle of Ronald Reagan’s first term and included integration of the city schools in the mid-1960s. Before that, starting in 1940, she taught in her native Arkansas and Nashville before then-Douglass Principal V.O. Dobbins Sr. offered her a job in 1944.

“She had a passion, talent and determination for helping students see possibilities in themselves that they had never before imagined,” read a plaque unveiled Friday afternoon at the school.

And Mayor Dennis Phillips pointed out that Cox helped start the first autism program in the city school system.

“Cora Cox had a real long reach,” said Calvin Sneed, a career television broadcaster who was a student of Cox in second grade at Douglass School.

Former students at the ceremony also included Kingsport Board of Education President Randy Montgomery, as well as some teachers who taught with Cox.

She taught at Douglass from 1944 to 1964, when she helped start special education classes and, in 1966, the Head Start program in the former Douglass building. She also taught at Robinson Middle, Sevier Middle and Johnson Elementary.

Sneed, who grew up in Riverview, said Cox reached out to autistic students.

“Cora Cox was the kind of teacher that would step in that box with them,” Sneed said, adding that she got special training and education for helping those with autism.

Leola Newton Campbell was a fellow teacher who met Cox in 1953 when their families attended St. James Presbyterian Church.

After it closed because of a dwindling congregation, she recalled how their two families in 1963 became the first blacks in the then-all-white First Presbyterian Church at the invitation of the minister there.

Campbell, who Sneed introduced as the first African-American licensed practical nurse at Holston Valley Community Hospital, said Cox’s favorite hymns were “This is My Father’s Word” and “Oh Master, Let Me Walk with Thee.”

Campbell said Cox loved to dance and tell stories, and had an infectious smile, faith and determination.

Kennedy said the alternative school has transformed from strictly a place for those with disciplinary or behavior issues to those who need or thrive in the smaller classes of 10 to 11 students and more personalized attention.

Kennedy said some students need help with credit recovery, often via online learning, or speeding up their earning of a diploma so they can get jobs to help their families.

“We believe that success is within the reach of every student,” Kennedy said.
She said some students sent there for disciplinary reasons request to stay and finish out their high school days there. 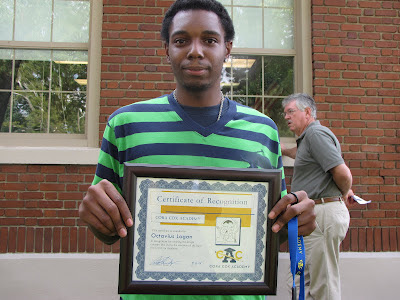 Octavious Logan drew the prototype of what students and faculty chose as the new logo for Cora Cox Academy. Kennedy said the school colors of blue and gold are the same as the old Douglass colors.

For more information on the alternative school’s programs contact Kennedy at 378-2185.

Posted by douglassriverview at 8:48 PM