Cora Rogers Cox History - From Arkansas to Tennessee: "A Teacher with Compassion, Conviction... and a Wonderful Sense of Humor"

Mrs. Fraulene Williams-Rogers, was married for 28 years to Francis Rogers, Cora Cox's older brother. He passed away 2 weeks after his sister did, in August, 1982. In the picture at left, she is visiting at a party in Kingsport in the 1950's, standing next to Douglass School teacher W. C. Scroggins. Today in 2012, Mrs. Williams-Rogers is 91 years young, and still lives above the funeral home in Camden, Arkansas that her husband started years ago.. in fact, Mrs. Williams-Rogers still works in a small office downstairs in the funeral home! She is four years younger than her sister-in-law Cora Rogers, and has fond, vivid memories of her as they were growing up. She shares some of those memories with the Douglass website. 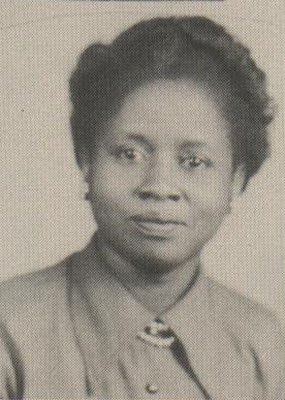 "Cora was a smart, young lady, a loveable person. Her main goal was trying to get an education during our time back in the 30's. They were hard times back then. When she was in school in Buena Vista (a small farming community, about 17 miles west of Camden), some of the black schools back then, only went to the 8th grade, so the children had to come all the way to Camden to finish the 12th grade. I think the house burned or something, and she and her mother and the family moved up here to Camden anyway and she finished high school."

"She was always interested in getting a good education.. I think she was interested more, in improving her lot in life. Times were hard down on the farm where she was born. One summer, she went to beauty school here and had a degree in that, at that time. I think that helped her to make extra money while she was in college. One of her older sisters used to tell about how she used to wrap up canned goods when she'd come home on the weekends from college and her sister would let her take it back home with her." 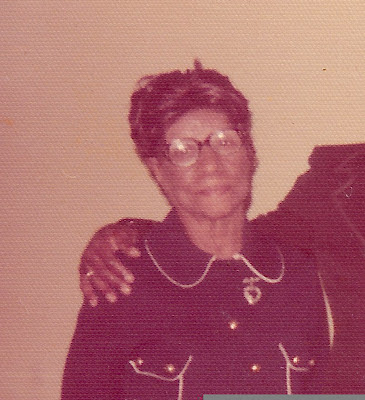 "Ada B. Rogers was her mother.. all the children were crazy about her. "Mama Ada B" they called her. She was an influential person in that she taught you what you needed to know, to survive. She was a wonderful mother-in-law to me the 28 years I was married to her son Francis. A very sweet person. Nobody went hungry in her house.. even if you didn't live there, like a neighbor or somebody.. didn't matter if you were black or white, if you were hungry, she fed you. She didn't work.. she was a housewife, raising kids and keeping the home straight. She died just a few days before her 100th birthday. Her father died in July of 1953."

"I remember they had a little grocery store in Kingsport at one time. When my husband Francis was stationed at Fort Knox (outside Louisville, KY), we used to go over to Kingsport to visit on the weekends, 'cause that was closer than coming all the way back down to Camden. We'd leave on Friday night and come back Sunday." 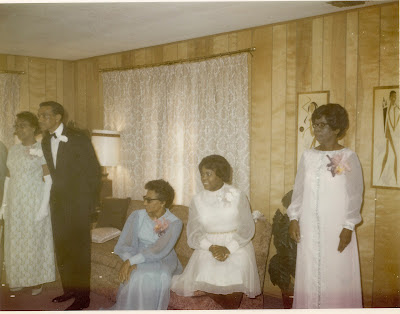 "We'd always have a good time whenever we'd come to Kingsport and see John and Cora. I remember one time in February, they were having a basketball tournament at the school, Douglass School.. Since I loved to barbeque, Cora said 'I want you to cook some, would you cook some barbeque?' I said 'it's wintertime,' and she said 'I got a little grill and we'll put it in the fireplace.' I said O-K.. I think she may have had a couple of slabs. I cooked the barbeque, in fact, I always did the cooking whenever I was there. I had cooked some greens and those 2 slabs of ribs. Well, there was 5 of us. So people started coming in, her friends.. they were coming over to her house 'we smell the barbeque.' She'd told everybody about it. I didn't get any barbeque. I told her, says 'is that what you wanted me to do, was cook for your friends?' She laughed about it and she said 'Sis.. I'm not gonna tell anybody about you cooking tomorrow,' and I said 'don't you send anybody over here. If anyone come, keep 'em out.' We laughed about that, but we had a lot of fun." 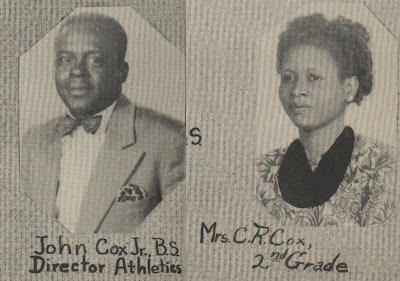 "I came there when they (she and John Cox) had their 25th wedding anniversary. Her husband John, you know he died here. My husband and the funeral home, brought his body back to Kingsport. They were visiting and he was going fishing that Monday morning with some of the men, and he got up, I think it was about 5 o'clock I think it was, and he got up to start getting ready so they could go fishing, and he set down and passed, right on the side of the bed." 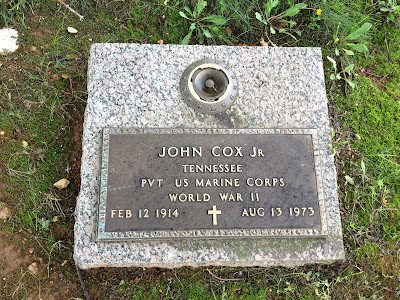 "Cora called us from Buena Vista and told us that he'd passed, so my husband went and picked him up.. he'd been in the funeral home business 30 years. She made plans, and told her brother she wanted him to take the body to Kingsport. He said, that would be fine. Me, my husband and Cora would be in the ambulance and the body would be in the hearse. In the hearse, there was a little cutout space there when you open the door just behind the passenger door. She got in back there, and I said 'Cora, you gonna sit back there?' and she said 'yeah.' She set back there all the way to Kingsport, 700 and some miles. She sure did. She set right there beside that casket, and she never came up in that front seat with me and my husband.. she set right back there with John. She didn't want to leave his side."

"I think about Cora often.. we had good times back then, and even when she moved to Kingsport." 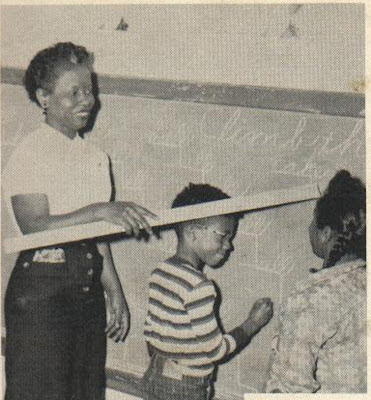 "She would send copies of things that she was involved in, in Kingsport, things going on in the neighborhood. Her students just loved her, and that doesn't surprise me. I think she might have taught her first students here in Arkansas.. I'm not sure of where it was." 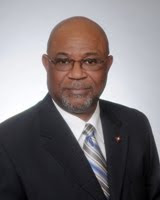 "I think she liked to teach the children 'cause she liked to watch 'em learn, to figure out things for themselves. Her great nephew, Willie Raymond Hardy.. when he was a little boy, he was real smart and he could draw pretty well and she was carried away with him. If anybody showed any sign of doing something great, she would get wrapped up in them. She would get carried away with his drawings. He was elected to the state senate in Little Rock, that's where he lives." 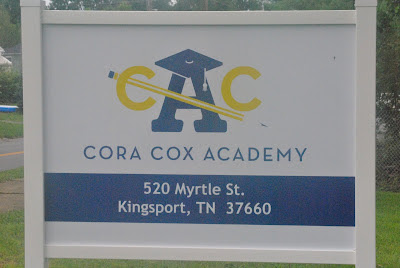 I think (the naming of the school after her) is an honor she would be proud of. If she were here, she'd say 'oh my goodness.. you're kidding.. you're naming a school after ME?' She'd be so proud, but she'd be proud that attention is being given to the children. She was proud of herself and what she did, but she was more proud of the children. All of her friends that were here are gone now. Her mother had a little restaurant, and she worked there for a little while.. she was good about finding a job. She knew she had to earn money. She went to beauty school and she would fix some of the kids' hair to earn a little extra money. She was determined to make money.. they were kinda on the poor side down there in Buena Vista. She struggled to get an education." 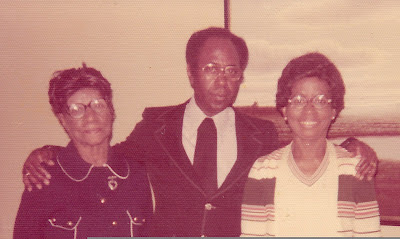 "My husband Francis, her brother, died two weeks after she died in 82. They were so very close. The whole family was like that. If you married into the family like I did, they loved you and treated you like you were blood kin. I just loved all of them, 'cause we were all raised together."

"I remember she went to school to learn extra about teaching them." 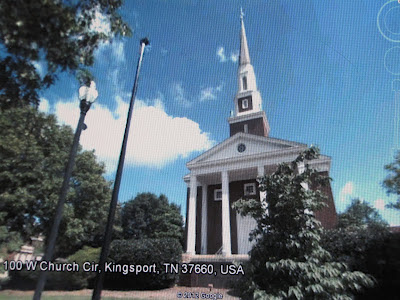 "She was a Presbyrterian in Kingsport, but she was raised a Baptist down here. She became a Presbyrterian after she married John. My mother and I were Presbyrterian. Our church membership went down and the church had to close, so some of us went to the white church.. my daddy went to the Baptist church up the street from us. We were the only Presbyrterians in the family.. the rest of them were Baptist. She was always a trailblazer in the study of The Lord.. she always kept Him in her life."


"If you have a program of the dedication, would you send me one? I'd love to see it." 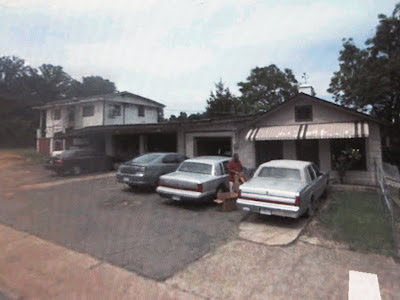 "I would love to be there, but I can't.. I just can't get around anymore. I'm 91, you know. I live upstairs over the funeral home that was started by my father. I live here by myself, I go downstairs and work in my office every day."

"I just think it's wonderful... to have a school named after you? That shows to me that she was well thought of, and that she did a good job at what she did. She was a good teacher. I knew that just listening to her talk about it. Thank you to the people that came out to the dedication from the Rogers family. We really appreciate it." 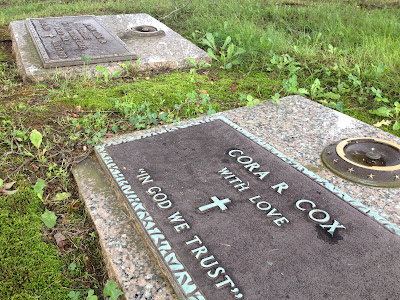 EDITOR'S FOOTNOTE: Cora Rogers Cox passed away on August 3, 1982, almost 30 years to the day that the city of Kingsport dedicated a school in her honor. The Cora Cox Academy is located at 520 Myrtle Street, in Kingsport, Tennessee.


Posted by douglassriverview at 5:37 PM