Leeper, Pistorius to go head to head today for 200 gold

From staff and wire reports 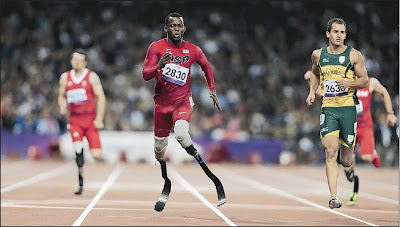 LONDON — Kingsport native Blake Leeper and Olympian Oscar Pistorius of South Africa will go head to head for gold in the Paralympics after both qualified for today’s 200-meter T44 finals.

Leeper posted a time of 22.23 to lead Saturday’s second heat and Pistorius, the gold medalist in the event in Beijing four years ago, ran a world-record time of 21.30 to top the third heat.

Leeper, who was born without lower legs, is a graduate of Dobyns-Bennett who went to the University of Tennessee. He moved to Chula Vista, Calif., in December
2011 to train at the Olympic Training Center.

Pistorius became the first double amputee to compete at the Olympics last month. He made it to the semifinals of the individual 400 meters and the 400-meter relay final running against ablebodied athletes.

He won three golds at the Beijing Paralympics.

Posted by douglassriverview at 10:05 AM