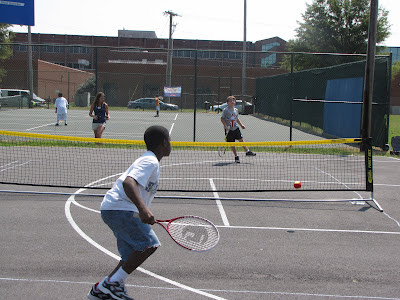 If the kids of the Riverview community have their way, the tennis world will have dozens of new competitors in a few years.

"It's fun," says Juliana Soto, who says she had never picked up a tennis racket before. "It's a lot of work, but it's fun."

About 35 neighborhood kids gathered at the tennis courts on the Douglass-Dobbins Ballfield took part in the first ever "Tennis Youth Play Day."

Click here to see a slideshow of the Riverview kids learning to play tennis. 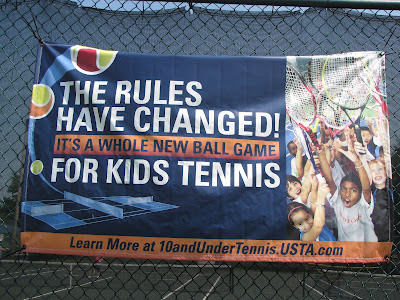 "The U.S. Tennis Association is trying to reach out to youth in urban communities," says Chassie Smiley-Freeman of Kingsport Parks and Recreation, local co-sponsor of the event. "They modified tennis to make it more user-friendly, joining other sports who had changed to accomodate players who are 10 years old and under, so they can be successful at it. In this case, the association shortened the court playing area and going to low-compression tennis balls, so the kids can go out and be successful at it." 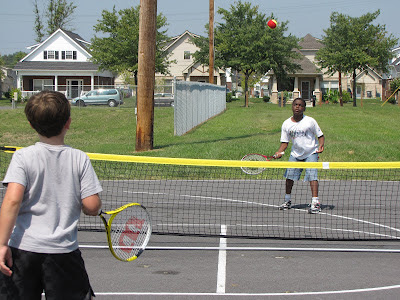 Among the neighborhood children learning the art of tennis, were Soto and several other New Vision Kids.

"We started out getting our exercises done first," says New Vision director Johnnie Mae Swagerty. "Tennis makes you use a lot of muscles, plus eye and muscle coordination. The city has been good putting this event together for the kids in the community, and they really had fun." 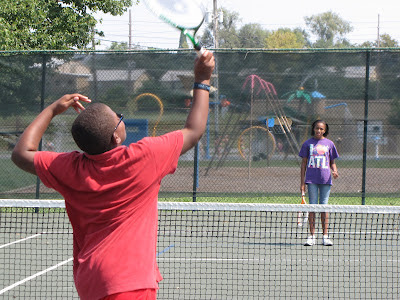 "We did do some games and skills, and everybody got to play, at least batting the tennis ball back and forth across the net on a reduced court at first. Then, at the end of the day, where kids usually watch the Wimbledon matches and the U.S. Open, we had them do similated matches, where they got to play against kids their own age, using new equipment and a new sized court."

"It was basically to make it fun and to show kids that, all you need is a racket, and a ball and a partner, and you can come out and have some fun on the tennis court, without spending a lot of money." 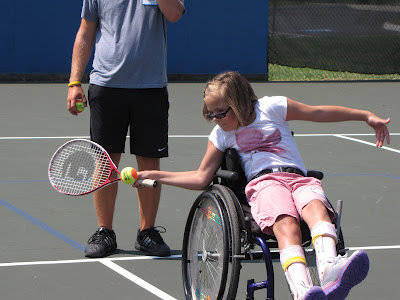 The tennis lessons may continue for some time, because the kids had such a good time.

"What we'd like to do, now that we've done the initial first step, is to have other "Play Days" maybe once a month," says Smiley-Freeman. "The next one comes up on September 22nd, and the way this new tennis craze is going, even if we have rain or bad weather, we'll come indoors. We're also planning one for November, around Veterans Day.. kinda do something for military families in the neighborhood involving tennis." 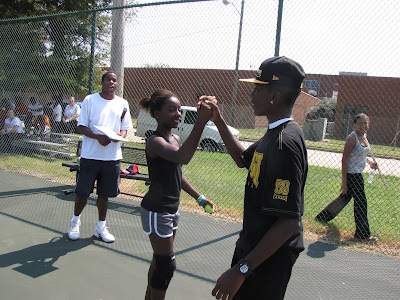 That works just fine for the kids.

Tyrick Hale says he can't wait until he can play on a bigger court with the lines extended. "I like playing the white lines better," he says. "There's more room to move around."

"If they could continue it, it'd be fun.. it'd be awesome."
Posted by douglassriverview at 4:17 PM