'Tis the season.. for the annual Kingsport Christmas Parade. 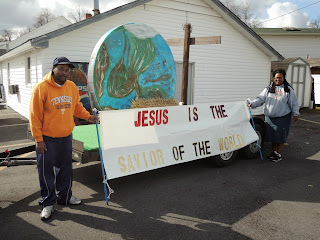 The community of Riverview was well represented in the annual event, with a float from the Mt. Zion Holiness Church.
"This is our first year," says church member Lavonda Harris. "It was our Pastor's idea. Dr. Lester L. Turner, and it really turned out nice. It gives great joy to do this."
As church members got their first-ever float ready for the parade, the message from the church to the parade watchers is clear.. to let everyone know that Jesus is the Savior of the world! 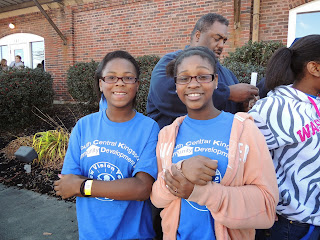 Meanwhile, down at the parade site downtown, members of the New Vision Youth were getting ready to stuff Christmas bags with toys and goodies to hand out to children who came to see Santa Claus. The New Vision Youth have done that for several years. 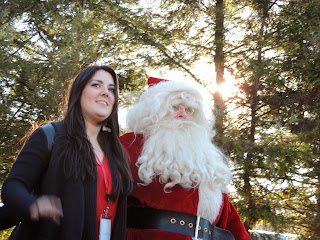 The Kingsport Christmas Parade is the culmination of a day-long event -- the annual Santa Claus Train. From Elkhorn City to Kingsport, Santa and his "helpers" ride the rails of the route of the old Clinchfield Railroad (now CSX), passing out toys, school supplies and other Christmas gifts to the children of Appalachia.
This year, Santa's guest celebrity was singer Kree Harrison of "American Idol" fame. The runner up from Idol Season 12 was recently seen on the annual Country Music Awards, making her debut on the Grand Ole Opry a few months ago.
The Santa Train is sponsored by CSX Transportation, the Kingsport Area Chamber of Commerce, Food City, and Dignity U Wear, and began 71 years ago as a way for Kingsport’s merchants to say thanks to all the folks along the train’s route for shopping in the Model City during the year.
The city of Kingsport has two major parades a year.. the 4th of July parade, and the Christmas parade. Thousands of people line up along the route from the Clinchfield train station as it winds through downtown to Center Street, then south to Cumberland Street. In addition to the bags packed by the New Vision Youth, candy and other goodies were handed out along the way.
Everybody loves a parade, so let the festivities begin and a Merry Christmas to all!
Welcome to the pictures taken by your Douglass reporter/photographer of the 2013 Kingsport Christmas Parade

Posted by douglassriverview at 9:15 PM