DB Band Trip to the 2014 Rose Bowl Parade: A Trip Delight Fantastic for One Band Member 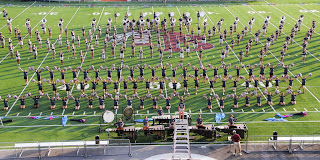 The third time is the charm for the Dobyns-Bennett Band of Kingsport.
Twice before, in 2002 and in 2007, the D-B band has been invited to the annual Rose Bowl parade in Pasedena, California.
This year's trip will include 33 African-American band members, many of them descendants of Douglass High School alumni. 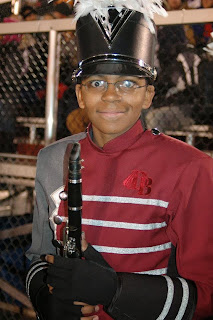 "As long as you're good at what you do," says 16-year old Stefan Beco, "you're in the band and you're part of the band family. It's good name recognition all over the world for Kingsport, and for us, it helps put Riverview on the map. I love my community and this is the way of keeping the right word for the African-American community in Kingsport. That's important, too."
Beco, the son of Melinda and Jonathan Clayton of Kingsport, goes to the Mt. Zion Holiness Church on Dunbar Street in Kingsport. He has played both clarinet and bass clarinet since 6th grade.
"The best thing I like about playing in the D-B Band," he says, "are the trips we get to take, and getting to socialize with friends. The band is one big family, it's like my second home. It's the play I'm at, a lot of the day." 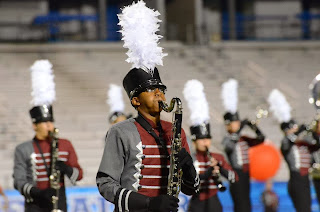 And while Stefan is socializing with friends... he's also trying to remember the notes.
"When I play, I'm always thinking of keeping the rhythm right," he says. "Sometimes it can be hard.. some songs we've heard before and we know what the rhythm is right, what the tempo is and how the song is supposed to feel. It helps a little bit whenever you're sight-reading a new song. It can be hard sometimes."
It's no secret that D-B band director Lafe Cook is one of the best high school band leaders around. Does he ever lose his temper?
"Yeah, sometimes," says Stefan, "but it's usually when he needs to. He hears something that doesn't sound right, and if you don't get it right after a while, he gets on you about it, especially at band practice. But it just makes us sound better. Band practices are long, hot, sweaty and hard."
"Practice, practice, practice. Practice is important." 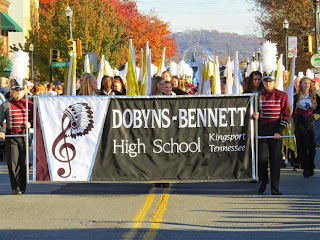 Money is important, too. It takes money to get the entire Dobyns-Bennett Band to Pasedena, California and keep them there up until the parade. It costs $1,700 dollars for each D-B band member to make the chartered round trip from Tri-Cities Regional Airport to LAX (Los Angeles International Airport), and back. The cost includes meals and hotel accomodations.
The band has had several fund-raising campaigns to raise money for the trip. Most of that has been raised, including a $500 dollar donation from the Sons and Daughters of Douglass, and contributions from the New Vision Youth and other groups, businesses, churches and private donations from in and around Kingsport. 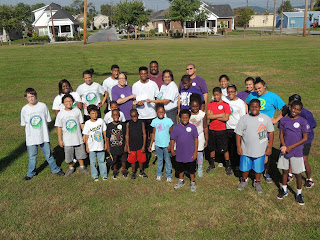 Stefan himself is the proud recipient of $300 dollars from fund-raising efforts by the New Vision Youth, of which he is a member. "I'm appreciative of my friends raising money for me," he says.
Stefan says, going to the Rose Bowl helps Kingsport get known around the country, and it also puts D-B in the spotlight. The band is one of 12 participating bands. 100 schools applied for 35 spots, and the 12 bands were chosen from that.
Once they arrive in Pasedena, all the bands will take part in a band fest, and a post-parade showcase of all the floats.
"We going to have fun," Stefan says. "I can't wait."
From David Golden at the parade
The DB Band marching in the Rose Bowl Parade, January 1. 2014

BLOUNTVILLE — Look out, Golden State! Kingsport’s Dobyns-Bennett High School Marching Band is headed your way.
The Northeast Tennessee band is to perform in the 125th Rose Bowl Parade in Pasadena, Calif., New Year’s morning, making it what Tournament of Roses 2013-14 Chairman Scott Jenkins has said is the only high school band in history to have some of the same classes of students perform in the Macy’s Thanksgiving Day Parade in New York — in 2011; a presidential inauguration parade in Washington, D.C., — 2013; and the planned Rose Parade appearance to kick off 2014.

D-B is among 12 high school bands scheduled to be in this edition of the parade and also marched in 2002 and 2007. High school bands are limited to performing no more than once every four years.

Lindsey Engle, a 17-year-old senior and drum major for the band, said the band members have worked hard practicing for the parade.

Behind the scenes, fundraising events made the trip possible. A gala event in the fall raised more than $80,000 for the trip to help students who otherwise couldn’t afford to go. The annual fruit and cheese sale generated more than $100,000 for the trip. The trip costs about $1,700 per student for transportation, rooms and most meals.

Engle said some families with more than one child in the band may have had trouble getting the money together.

“I have never been to California before. I’m excited about it,” said Rebecca Brewer, 17 and a senior piccolo player.

Mark Marcus, a senior band parent in charge of publicity for the band, said an 11th-hour addition to the marching is a 52-second opportunity to bring a little part of the band’s 2013 halftime show to California.

“We practiced some of that and we got to practice some of our general parade route along the route,” Lindsey said of a Dec. 10 practice session along a section of Center Street near D-B. The street was temporarily closed to traffic while school was still in session.

“I’m really excited to be able to put that uniform on one more time and play great music,” said 17-year-old senior Kevin Marcus, son of Mark Marcus. He is the trumpet section leader.

“We just worked our butts off this year,” Kevin said. “I’m really looking forward to get out to California to represent Kingsport.”

The band will play an abbreviated version of the Blues Brothers Soul Man from the half-time show and do a marching routine Band Director Lafe Cook designed especially for the parade.

That performance will take place during a halt in the marching near the intersection of Colorado Street and Orange Avenue.

Television coverage in the United States is to include ABC, NBC, HGTV, RFDTV, the Hallmark Channel, Los Angeles station KTLA, Univision and FamilyNet.

Jenkins said parade viewership is estimated at 800,000 along the parade route and almost 57 million U.S. TV viewers, with an estimated worldwide audience of about 350 million viewers.

Also included in the parade, near the 29th slot D-B’s band will hold, will be a floral memorial for late D-B graduate Adam Fletcher Lively. The memorial will be part of the 2014 Donate Life America Float at the Rose Parade.

Kingsport native and 1994 D-B graduate Lively was part of the choral department’s show choir and went on to study philosophy at East Tennessee State University.

However, on a rainy evening of Jan. 16, 1998, Lively and his friends were returning to ETSU when the driver swerved to avoid hitting an animal and lost control of the car. The vehicle rolled, causing Adam to sustain a severe head injury.

He died four days later, but six weeks before the accident had told his mother, Barbara, he wanted to be an organ donor. “The Adam we knew was gone,” said his father, Dave. His mother, Barbara, said: “It was a decision that we have never regretted.”

His gift saved the lives of five people and improved the quality of life for more than 50 more, according to a news release from Tennessee Donor Services. Every year, the Donate Life America Rose Parade Committee selects honorees for its parade float.

The theme for this year’s float is Light Up The World. Tennessee Donor Services is an official sponsor of the float and is sending Lively’s parents to Pasadena to be a part of the festivities and celebrate his life and gift.

The Tribe band is to leave Saturday morning from Tri-Cities Regional Airport in two chartered jets and return there Friday morning, Jan. 3.

Marcus said the main part of the entourage will leave at 9 a.m. from the general aviation hangar in a 747 carrying 452 students, chaperones and staff.

Marcus said the plane had to fly out of general aviation because of its size and that the only other time a plane that large has flown in and out of Tri-Cities was for a presidential visit of Air Fore One.

A 737 carrying 143 “band fans,” which Marcus said were mostly parents and some chaperones, will leave at 8 a.m. that day through the main airport.

That makes for 595 people, but eight more are arriving by alternative travel for a total of 603.