Below, the athletes and D-B graduates who participated in Saturday’s fundraiser for the Kitchen of Hope spend a little time in the kitchen at Applebee’s making pancakes. The Kitchen of Hope plans to reopen on Jan. 6. 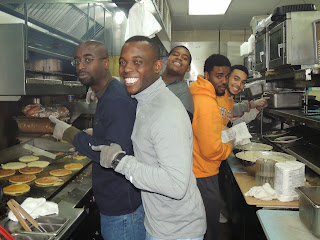 KINGSPORT — Plumbing repairs have been completed at the Kitchen of Hope in Kingsport and it plans to resume serving meals to the homeless on Jan. 6.
With the help of some former Dobyns-Bennett High School athletes and community support, a Dec. 28 pancake fundraiser for the Kitchen of Hope raised close to half of the low-end estimated amount of money needed to fix plumbing for the kitchen. However, subsequent donations brought the funds to nearly the amount needed to meet the high-end estimate.
As of Saturday night, the event had raised $2,730, according to Calvin Sneed of the Sons and Daughters of Douglass Alumni Association, but donations have continued to flow in to the program, which is located in the basement of the Full Gospel Mission Church on East Sevier Avenue.
Johnnie Mae Swagerty, daughter of church pastor Geraldine Swagerty, said Monday night that donations that had come in since the Saturday fundraiser brought the total to $7,010 and counting. That total includes donations that came in Monday, such as Remington House employees who gave a $300 cash donation to the Kitchen of Hope.
Swagerty said that Steve Huff Plumbing had estimated it would take between $6,000 and $8,000 for the labor and materials to fix the plumbing issues at the Kitchen of Hope. And she said that included Huff giving the program some price breaks.
In an email sent out early Tuesday, Nellie Valk-Roberts, steering team leader for the Kitchen of Hope, said that the plumbing repairs have now been completed. She said the kitchen plans to reopen on Jan. 6 and will resume serving meals every Monday through Saturday from 3:30-5:00 p.m.
The Salvation Army is temporarily providing the evening meal that Kitchen of Hope used to provide.
The kitchen opened about 13 years ago to help feed people who are hungry and is open to everybody, but it serves mostly the homeless.
“The community really came together and helped out,” Johnnie Mae Swagerty said. She said many at the breakfast fundraiser gave more than the recommended $5 donation.
Swagerty estimated that 300 to 400 people came to the fundraiser at Applebee’s on the corner of Stone Drive and North Eastman Road.
The athletes and D-B graduates who participated were Blake Leeper, a Paralympic sprinter; Brenton Leeper, a football player for the University of Tennessee at Chattanooga; Devaun Swafford, a football player for the University of Tennessee; Teddy Gaines, a football coach for East Tennessee State University; and Malik Foreman, a UT football player.
“It was just so busy,” Swagerty said.
For a $5 donation, they got pancakes, sausage and a drink. The first 10 people in the door got UT piggy banks with athlete autographs, and the athletes mingled with the crowd and did a little work in the kitchen.
Sneed said Swagerty and the kitchen supporters wanted to thank the manager and Applebee’s, which donated the food for the breakfast, as well as the athletes.
Swagerty also thanked the Kitchen of Hope volunteers; New Vision Youth; Greg Spann of Unome, the pancake chef; Robinson Middle School; Power Point Ministry Church; Sneed; the Kingsport Times-News; Jonathan Radford of WCYB-TV5; and “the wonderful people of Kingsport and the surrounding area for helping the Kitchen of Hope in its mission to feed our homeless neighbors.”
“Those New Vision Youth kids worked their butts off,” Swagerty said of selling tickets and helping with the breakfast.
Donations are still being accepted for the kitchen. For more information, call Swagerty at (423) 429-7553. Checks can be made out to the Kitchen of Hope, 740 E. Sevier Ave., Kingsport, TN 37660
Posted by douglassriverview at 9:22 AM