Kingsport MLK parade organizer notes many accomplishments, says ‘there is still work to be done’


Before the march: video of the rousing pep rally speech by march organizer Rev. Ronnie Collins 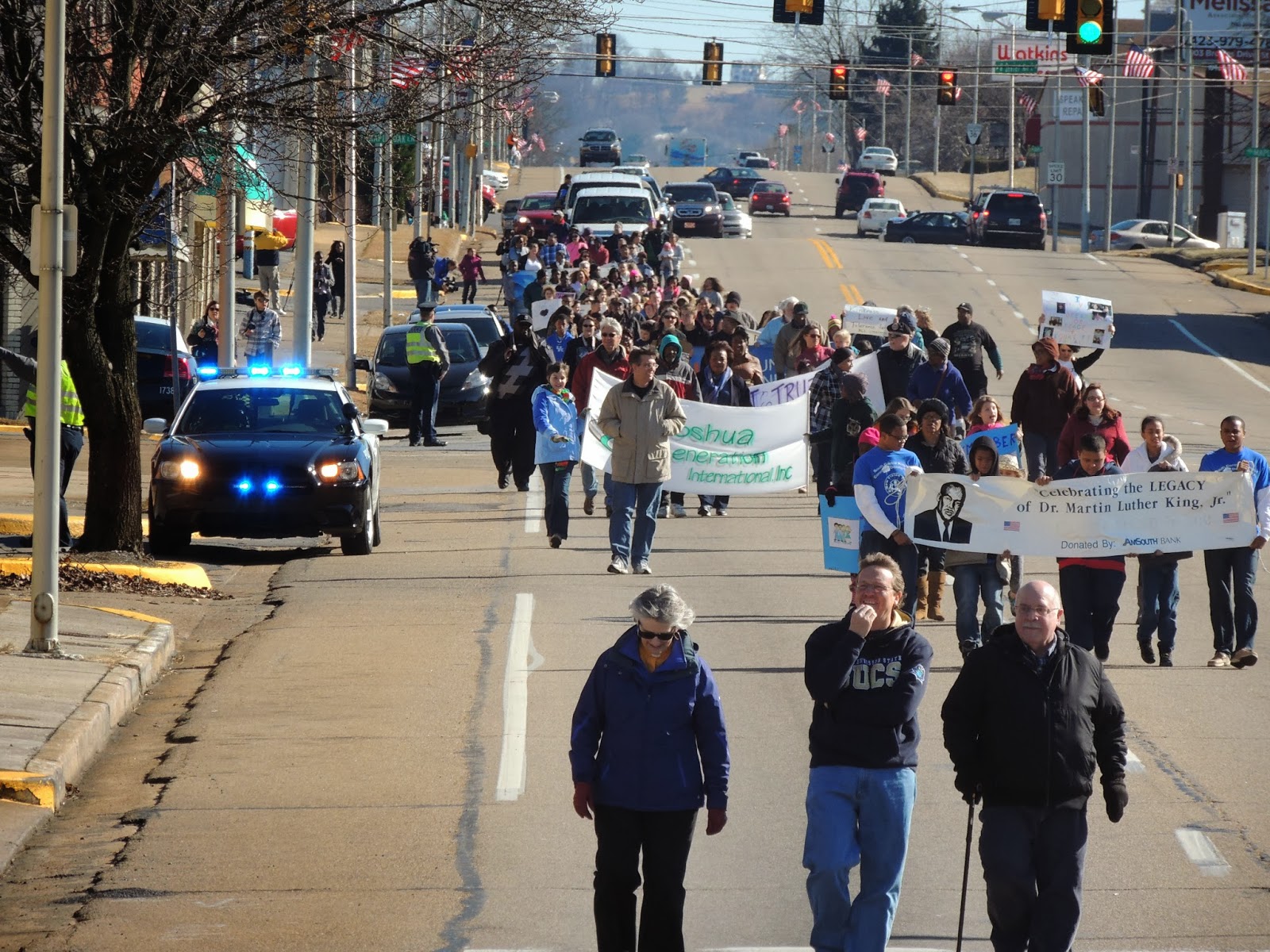 KINGSPORT — An annual parade in downtown Kingsport commemorating Dr. Martin Luther King Jr. Day drew a diverse crowd of more than 150 people — many of whom were teenagers and young adults — who took the time on Monday to honor the life and dream of the slain civil rights leader.

Click here to hear our video interview with Rev. Collins during the march in downtown Kingsport

“This is our annual time to really get to talk to people about who and what Dr. King stood for,” said Overseer Ronnie Collins, who helped organize the parade. “We believe there has been a lot of change over the past 50 years and the dream itself has come to pass in some aspects, but we have not arrived yet. We think there is still work to be done and we want to do our part in this region.”
The Tennessee/Virginia Fellowship Against Racism and the East Tennessee Full Gospel Baptist Church Fellowship sponsor and organize the yearly parade on the national holiday honoring Dr. King. Other organizations participating included Joshua Generation International, the United Religions Initiative, Girls Inc., New Vision Youth and the HOPE (Help Our Potential Evolve) youth organization. 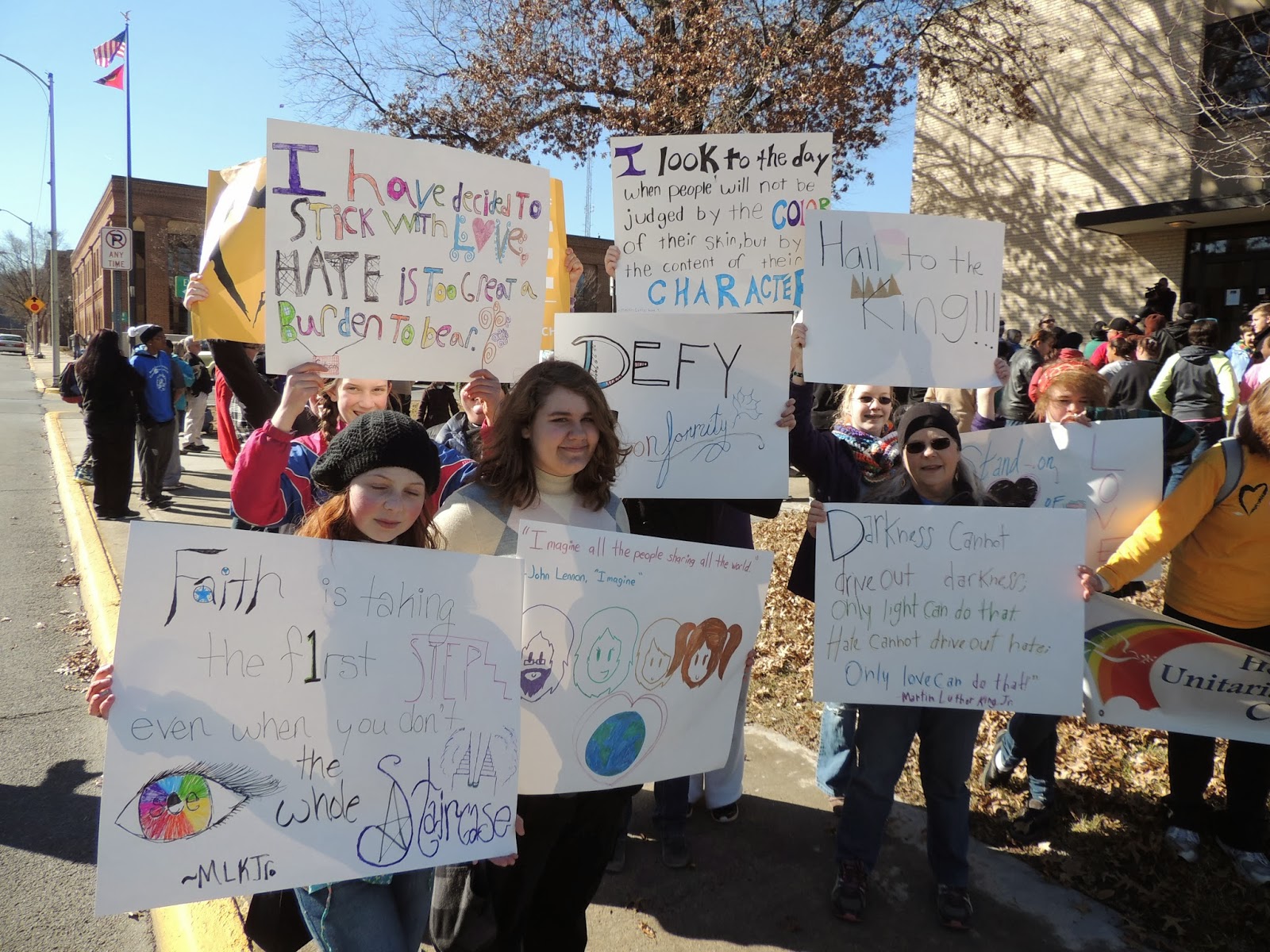 Monday’s parade drew one of the largest crowds in its 14-year history, a diverse crowd of African-Americans and Caucasians of all ages, many of the younger generation carrying signs with “Unity,” “Peace” and “Love”
Collins said there needs to be a push for people to love each other. “It’s all about the love of Christ in 2014. Allow God to use you to help change society,” he said. 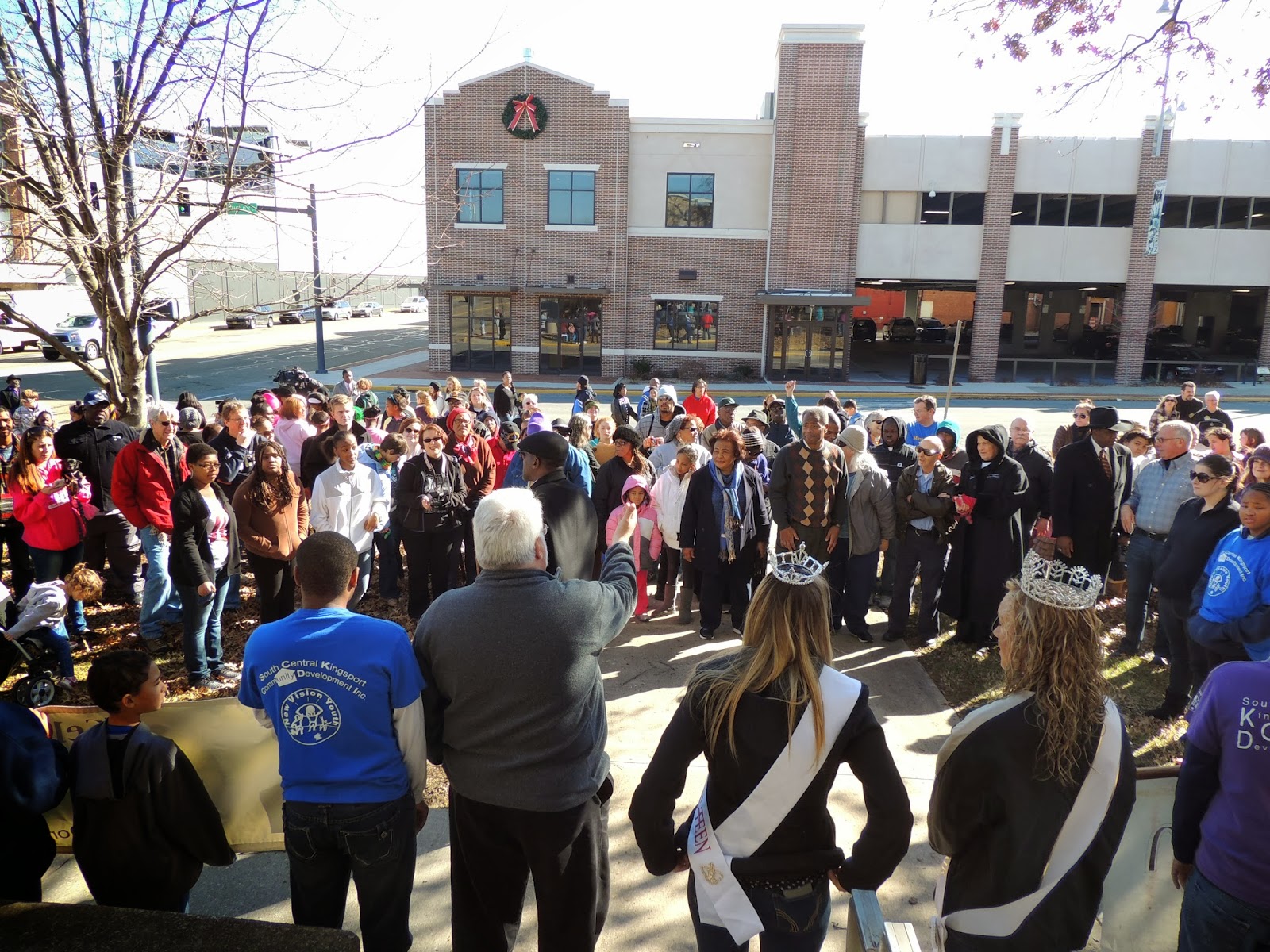 Click here to hear our video interview with Kingsport Mayor Dennis Phillips on the importance of honoring Dr. King

For the first time, the TVFAR gave out two new “Keeping the Dream Alive” awards to HOPE and New Vision Youth for their efforts in promoting Dr. King’s vision for America.
“We believe it is time to bring in more youth. The youth is our main goal,” Collins said. “All of our other objectives we started 17 years ago have been accomplished, but we still cannot get the bands involved from Kingsport and the surrounding areas, nor a huge number of youth.”

As to why the youth are not getting involved, he said, “I think it’s because they’ve grown up in the aspect of everything is good, blacks and whites are already going to school together and there is no segregation. All of those things are something they’ve only heard about and not anything they’ve experienced.” 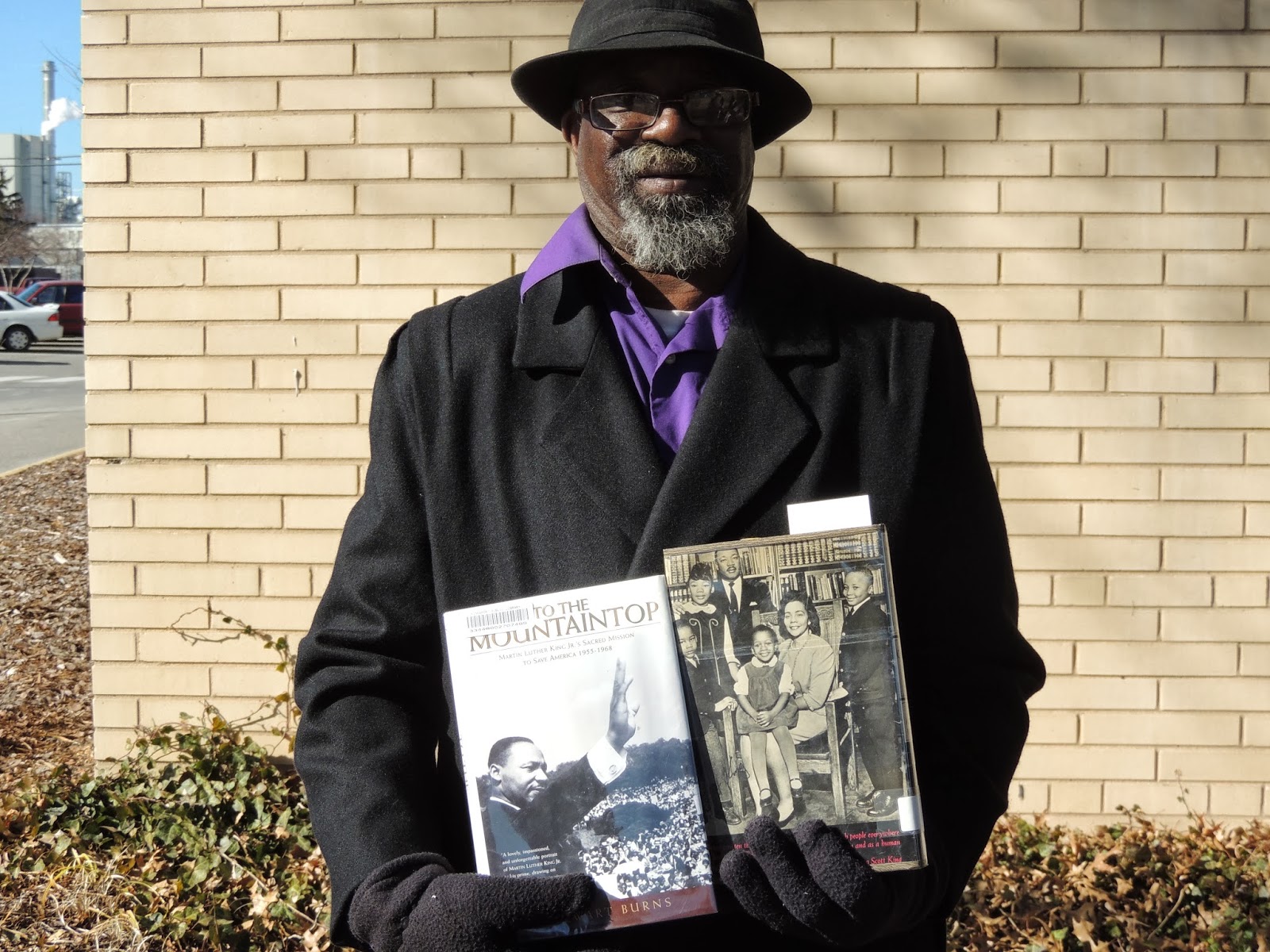 AT RIGHT.. FREDDIE SKAGGS WITH
BOOKS ON DR. KING'S LEGACY


Click here to hear our video interview with Kingsport Mayor Dennis Phillips on why more people did not attend today's march
King was born in 1929 and would have turned 85 this month. The federal holiday is the third Monday in January and has been celebrated since 1986. King’s legacy was marked on Monday with special events held across the nation, from parades and church tributes to youth-led service projects.
Last fall marked the 50-year anniversary of King’s march on Washington, D.C.


“The dream says a lot of things to many people, but what it was trying to do is tell us to become one,” Collins said. “From the White House to Congress to the Senate ... if we can’t work together, we can’t be a shining example to the whole world. America is the greatest country in the world, and it’s time for us to treat each other like brothers and sisters.” 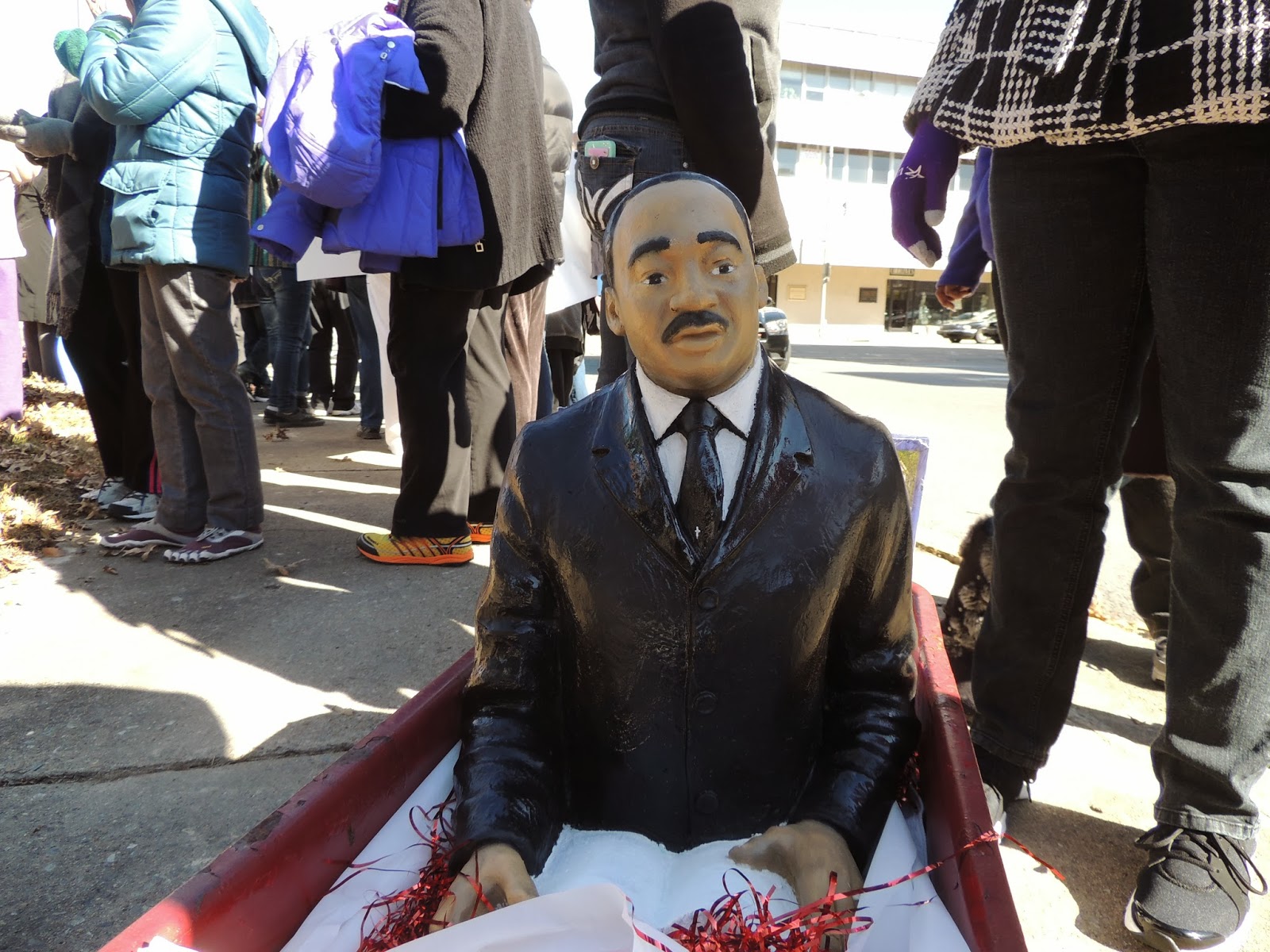 AT LEFT... A CERAMIC BUST OF DR. KING, THAT PASTOR GERALDINE SWAGERTY DISCOVERED IN HER CLOSET AFTER 30 YEARS

Linda Calvert, president of the Kingsport Ministerial Alliance, said the day is good to be able to remember what King did and for people to give back to their community.

“Today is a very special day because it commemorates the birth of Dr. King and celebrates what he was able to accomplish,” Calvert said. “Though it’s been 40-plus years since his death, we’re still seeing the dream materializing, though it’s not a race-based dream, but a dream that encompasses all ethnicities and socioeconomic standards.”
A SLIDESHOW OF THE DR. MARTIN LUTHER KING MARCH IS BELOW


Posted by douglassriverview at 5:48 PM