Leeper to be honorary official at Daytona 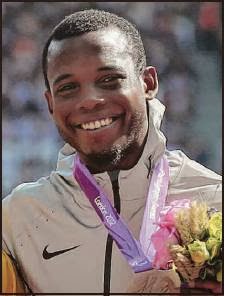 DAYTONA BEACH, Fla. — The American Blade Runner and The Great American Race will come face to face next month.

“Blake Leeper is a true inspiration and a legend in the making,” Daytona International Speedway President Joie Chitwood III said. “We are honored to have him participate in the pre-race ceremonies at the ‘World Center of Racing’ for the thrilling and historic Daytona 500.”

Leeper, a Dobyns-Bennett High School alum who attended Tennessee before transferring to San Diego State, was born without legs from the knees down because of a congenital birth defect.

In 2008, he started intensively running after the Challenged Athlete Foundation presented him with a grant for state-ofthe-art blade prosthetics.

Leeper is currently training for the 2016 Rio Olympics, where he would become the first double-amputee American to compete in the Olympic Games.

For more information on Leeper, go to www.americanbladerunner.com

For more information on the Daytona 500, go to www.daytonainternationalspeedway.com
Posted by douglassriverview at 7:39 PM