The New Eastman Ballfields - The Impact on Riverview And Clay Hill, Its Former "Unofficial Playground", Part 3

THIRD IN A SERIES 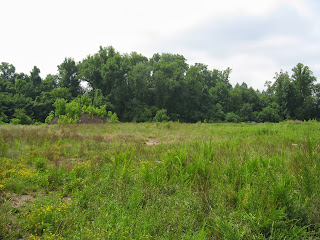 Riverview's Clay Hill area will soon come back to life.. but not just for Riverview kids anymore.

The area always owned by General Shale will soon hum to the activity of softball and baseball.. the new home of the Eastman ballfields.


For many years through many childhoods, Clay Hill has been Riverview's "unofficial playground." During America's segregation years, African-American children could not enjoy the playgrounds in the nearby white neighborhoods of Kingsport, so, despite their parents' wishes, the Riverview kids found a refuge on Clay Hill, named for the light brown clay and gray slate rock that formed hills and valleys throughout the site. 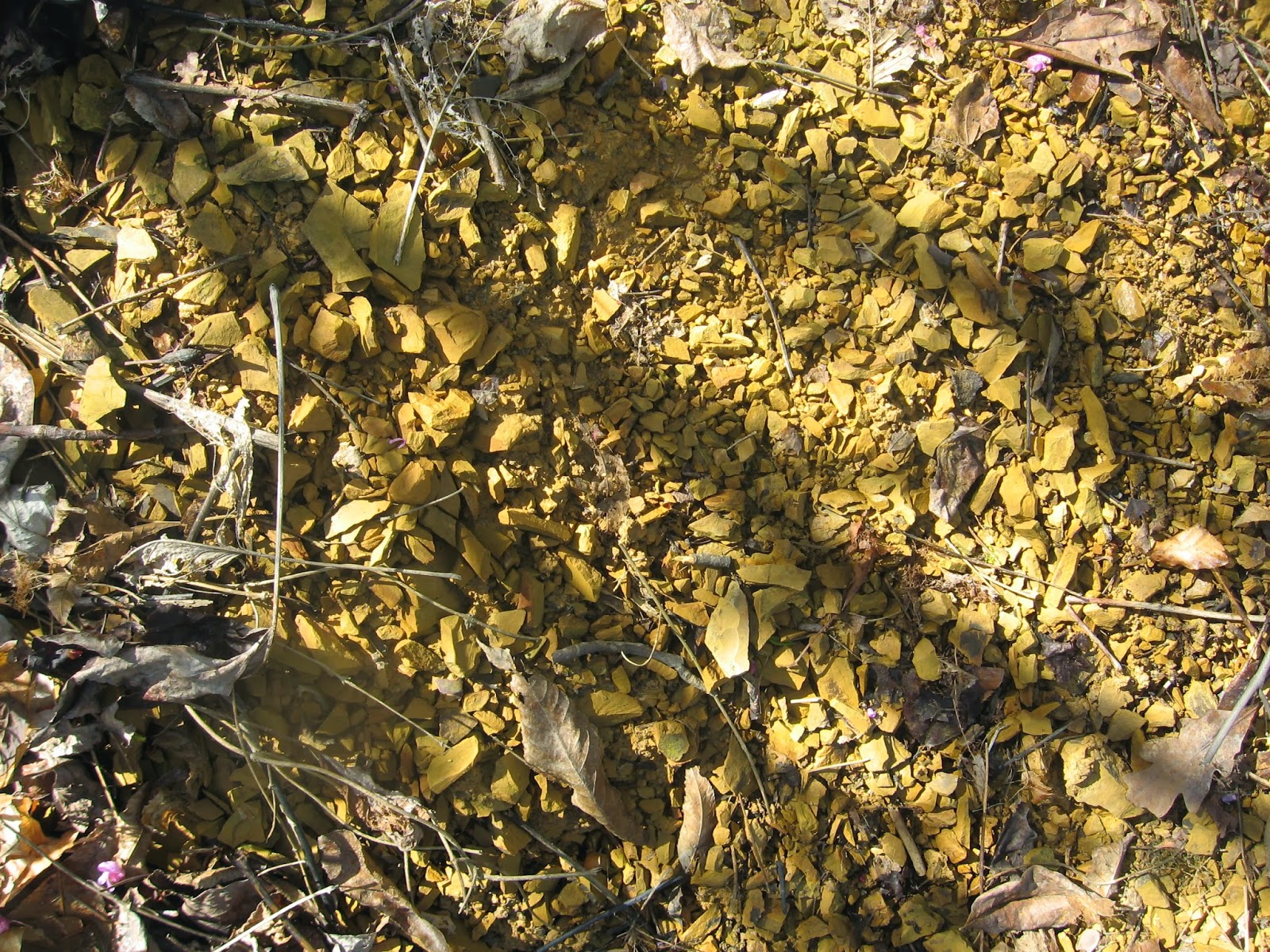 HERE'S WHY WE CALL IT 'CLAY HILL:'  THE BROWNISH, CLAY ROCKS FOUND ALL OVER THE AREA

Generations of Riverview children, hundreds of them, roamed all over the area directly behind Dunbar Street, building clubhouses, doghouses, camping sites, trails and jungle gyms reconfigured from scrap metal dumped by General Shale, who operated the property as a dumpsite from the brick-building process. 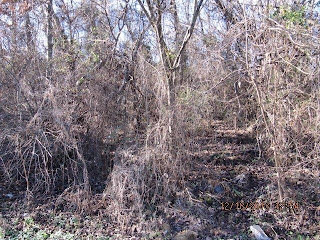 YES IT IS STILL THERE!   AFTER MANY YEARS OF GUIDING MANY RIVERVIEW CHILDREN TO THE LAND OF MYSTERY AND INTRIGUE... THE OLD PATHWAY TO CLAY HILL STILL EXISTS,  TO THE RIGHT IN THIS PICTURE JUST OFF DUNBAR STREET

"Moose" Henry also remembers that little path. For any Riverview child with a vivid imagination, it was a "highway to heaven."

"We used to have to watch out for Mr. Dobbins," he says, "to make sure he wasn't working out in the garden behind his house. That little path between his house and Papa Sneed's house.. we'd do a thousand going past their houses to get up there without nobody seeing us. We'd stay as long as we could, all day long sometimes especially on weekends, and then you'd have to sneak back down, because if he saw you he'd fuss at you for going up there. Lots of times, somebody would tell your mom 'I saw them boys going up on Clay Hill.' Even before you got home to your whipping, somebody would whip you all the way back home for going up there."

"I got my tail wore out many a time for going up Clay Hill."


"A LAND OF MAGIC AND MYSTERY" 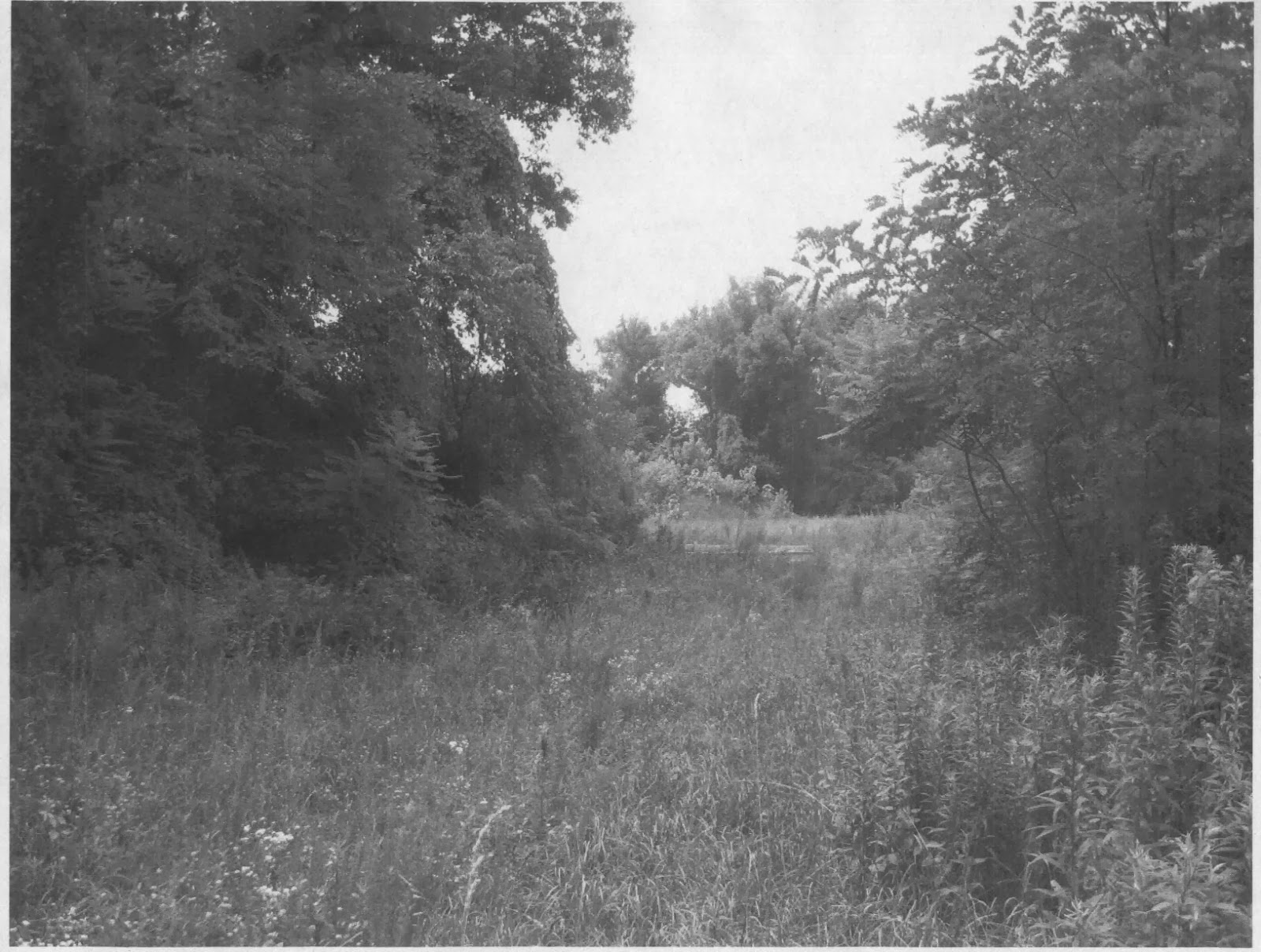 But once you got to the top of the path from Dunbar Street past the houses, the hussle and bussle of the neighborhood.... all of a sudden... this magical land opened up. A land of short hills and cliffs, hanging vines from trees, open areas, wooded areas, holes that would quickly fill up with water whenever it rained, and abandoned machinery from nearby General Shale.

To the kids from Riverview eager for exercise and adventure, Clay Hill was short hills to slide down, cliffs to peer over and test a fear of heights with, vines to swing from, open areas to run and race through on bicycles, wooded areas that were good for camping, watering holes to play in (and even swim in), and abandoned machinery to probe through, climb over and colonize.

Many Riverview kids slid down the clay and slate hills on cardboard, sometimes many times in one visit.

Clay Hill was a fantasy world where the 'Starship Douglass' would drop off Riverview kids to "explore strange, new worlds. To seek out new civilizations."

"To boldly go where no child has ever gone before." 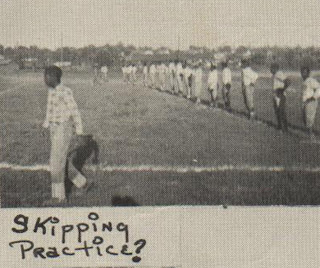 IF THIS CAPTION FROM A PICTURE OF THE DOUGLASS BALLFIELD FROM THE 1956 DOUGLASS ANNUAL IS CORRECT, BET WE KNOW WHERE THIS RIVERVIEW YOUTH IS HEADED!

Norman Hankins remembers "During my middle school years, Clay Hill was a perfect playground where energetic and mischievous boys could hike, run and throw rocks, without worring about breaking someone's window. Clay Hill was also a great place for us to practice the camping skills that we learned in the Boy Scouts."

The "new civilizations" consisted of any everyday animal a child might see on a daily basis.... rats, snakes, possums, raccoons, skunks, birds, and even domesticated animals like dogs and cats. 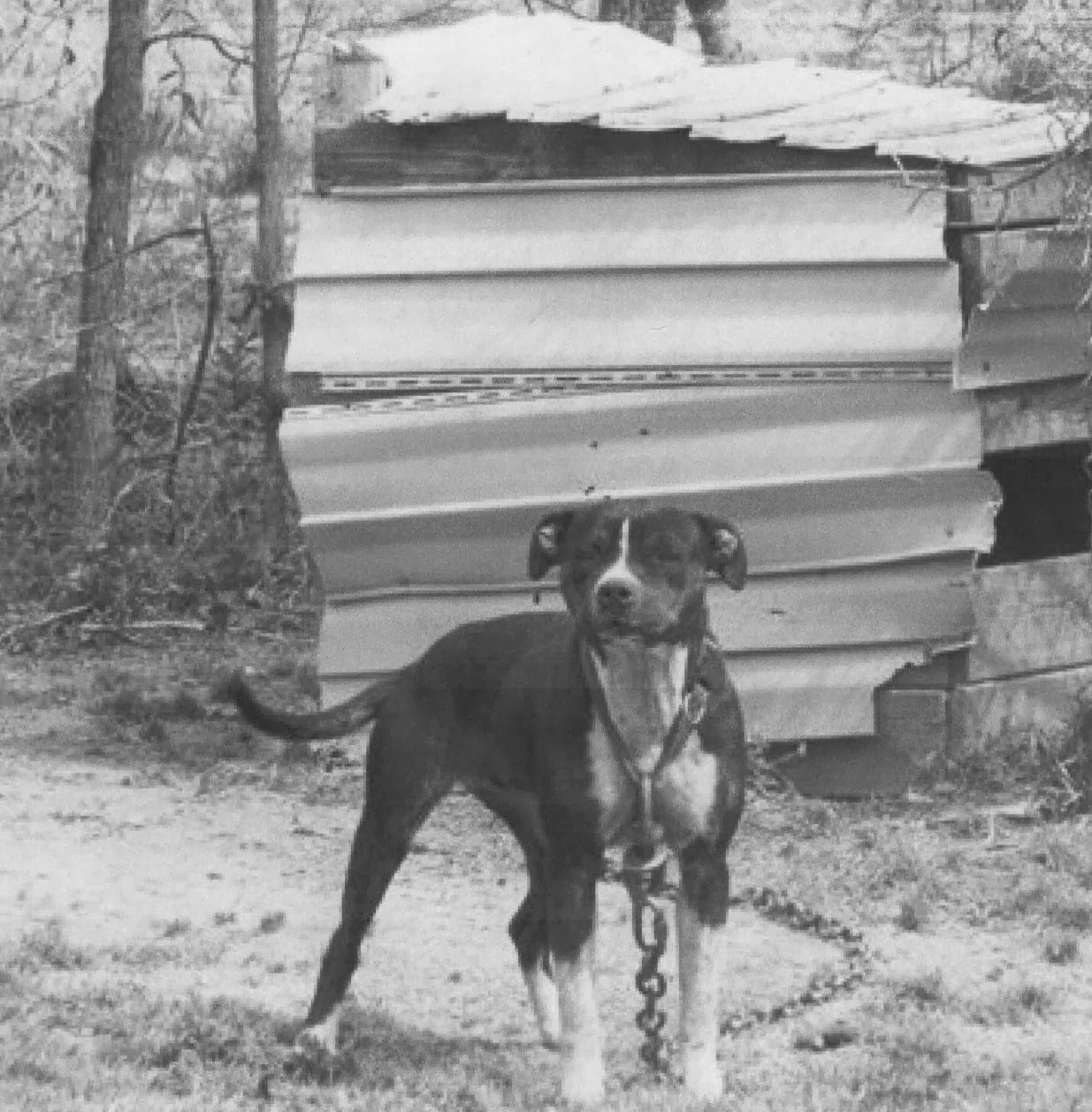 "There was a rule that you couldn't have dogs in the projects," remembers Moose. "So boys would keep their dogs on Clay Hill. Take your dog up there and build a little doghouse for him. If you chained them up, they'd always be waiting on you when you got out of school. You couldn't get any wood, but boys would get metal and cardboard from the train cars, that real hard cardboard that would not get soggy if it got wet."

"Those cardboard dog houses would stay built forever... walls would last a long time and would never cave in," he says.  "Rain, wind.. nothing would tear 'em up, and the dogs would always stay in 'em. You'd keep a regular check on them and feed 'em every day, make sure they had food and water. The dogs loved it because they had that, and the kids loved going up and playing with them." 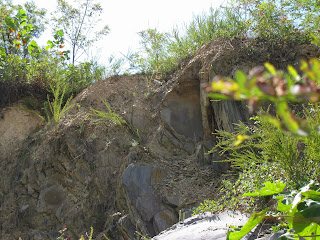 HISTORIC TIGER HILL, BEFORE IT WAS LEVELED FLAT 7 YEARS AGO

"One of the first places you'd come to, once you got to the little road back there, was a place called Tiger Hill," says Willie Hodges. "I don't know who gave it the name 'Tiger Hill,' but that's what it was called. It was a narrow, long hill made out of slate rock and brown clay. It was pretty high up for us, but you could walk along the top of it, up and down. One time, we went to Tiger Hill and saw a big snake, about 4 feet long.. it was halfway in a hole on Tiger Hill. I can't remember good, but I think it was Phillip Horton.. he grabbed that snake and started pulling on it. Don't ever try to pull a snake out of its hole. He pulled and yanked, but Ole Snake got more and more in the hole. Well, Phillip pulled out his Boy Scout knife and started whacking at that snake. Snake pulled loose and just went on in its hole, like nothing every happened. We laughed about that all the way home."

THE THINGS THAT MADE CLAY HILL SPECIAL
TO RIVERVIEW CHILDREN 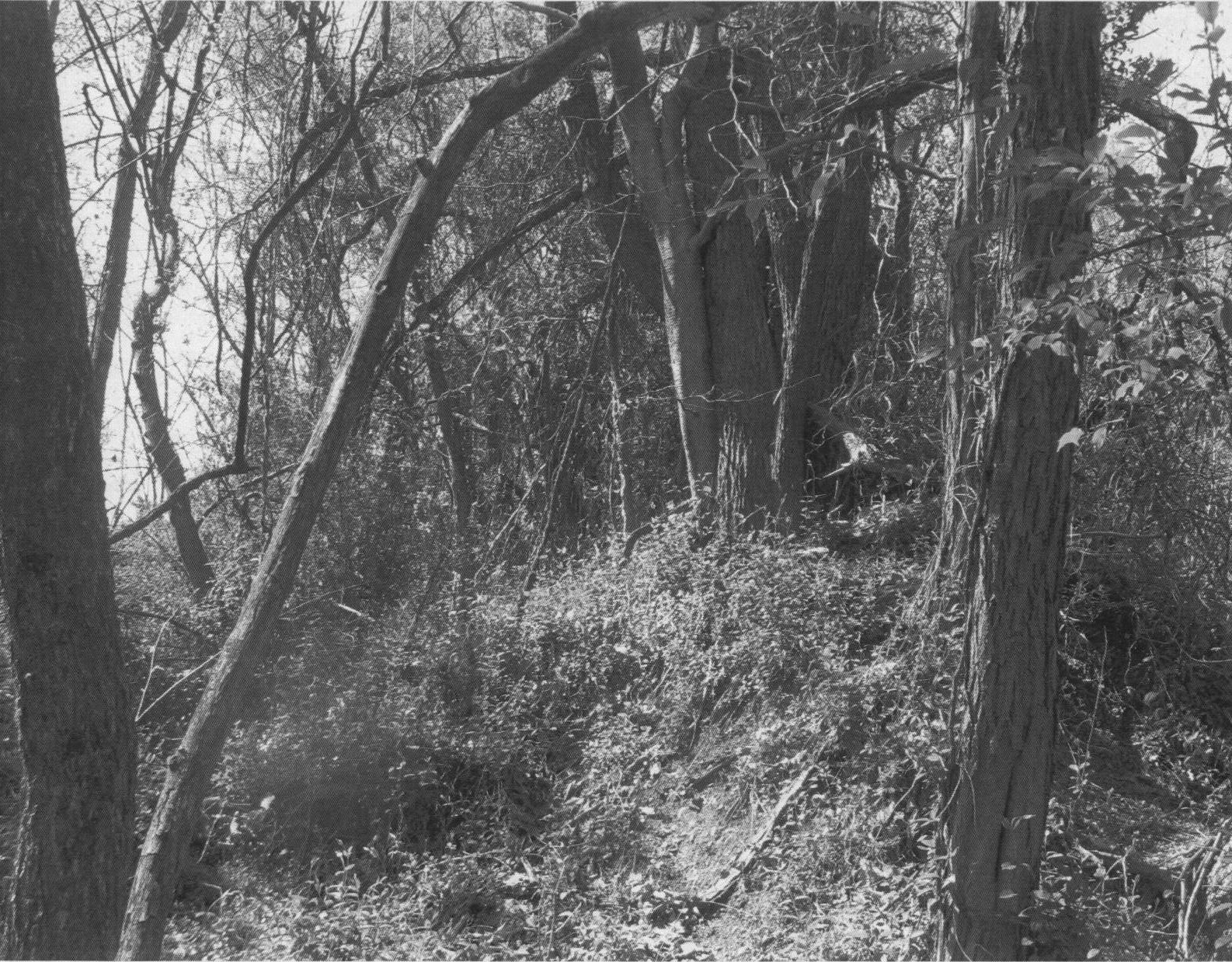 Many trees on Clay Hill lent themselves to several treehouses built by the older boys, but hanging vines like the ones to the left in this picture made for a Tarzan-like experience.  They were so strong that any kid, big or small could swing from them. But that led to a bad experience with some Riverview children.

"I went to Clay Hill, probably not more than 2 times," remembers Helen Bunting. "I remember a friend and I went after school, without permission.. maybe more people went with us, I'm not sure. We were swinging from the trees on something that looked like what Tarzan used in movies." PATH ON CLAY HILL LEADING PAST AN OLD SINKHOLE, COVERED WITH WEEDS ON THE RIGHT

"My friend fell into this black soft looking dirt, I don't know what it was, someone yelled 'quicksand!' We all panicked because it was pulling her down and only above her shoulders was showing, and she was screaming. I don't know who it was, but someone pulled her out.

"We never went to Clay Hill again. We went in the first place, knowing we should not go there, but everybody always talked about Clay Hill, and we wanted to see what it was all about." 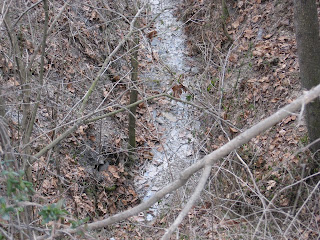 "I remember one big ole water hole up there," he says. "Whenever it would rain, that hole would fill up with dark-looking water and we would take turns swinging from the vines and just dropping right into it with a big splash. We'd let go in that cold, nasty water and your mama would say (while she's whipping you), that 'you 'coulda drowned up there and we'd never know what happened to you. Sometimes, we'd piggyback, get somebody on your back and two of you would swing real high over that hole and both of you would let go and you'd hit the water." 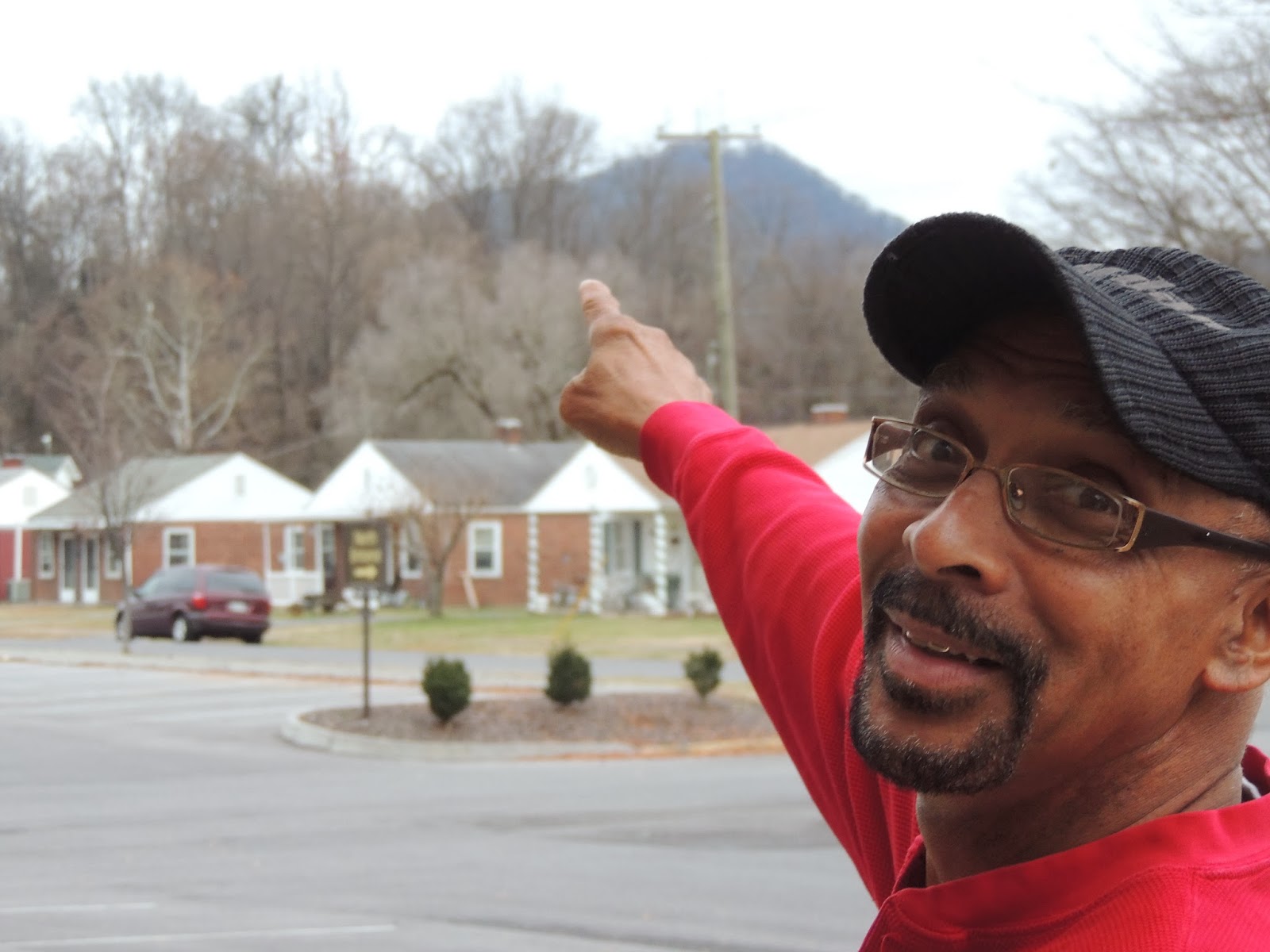 "Coulda got hurt, but we didn't think about that," he remembers. "We just had a good time, a free swim.. didn't have money to go to the (Riverview) swimming pool, but Clay Hill was a free swim we knew we could have."

The mystery of Clay Hill's allure was striking. "You just couldn't wait to get up there," Moose says. "Run by and get Ronnie... Bubba... Calvin... Rickie... William.... Jerry... Donnie... boys, girls... didn't matter. 'Tell everybody that we're going up on Clay Hill tomorrow.' You'd round up everybody, sneak up there and run and play for hours."

"It was indeed, Riverview's unofficial playground." 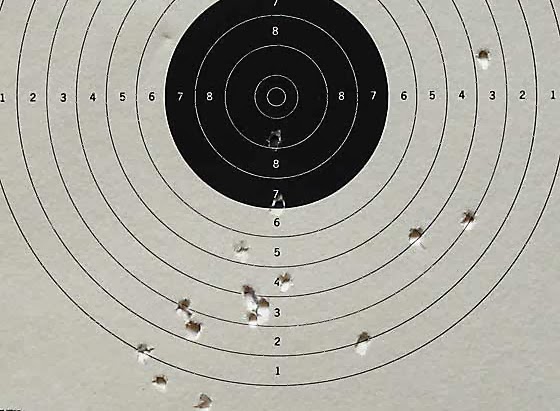 A SAMPLE BB GUN TARGET, UNLIKE THE VEGETABLE CANS RIVERVIEW BOYS SHOT AT ON CLAY HILL


Many kids honed up their gun target skills by practicing in the close confines of Clay Hill.

"We would take our little B-B guns and take cans and knock them over," says Moose. "It wouldn't do for anybody to get a new B-B gun for Christmas and not take it up to Clay Hill to practice with it. We would try to see who had the best target practice." 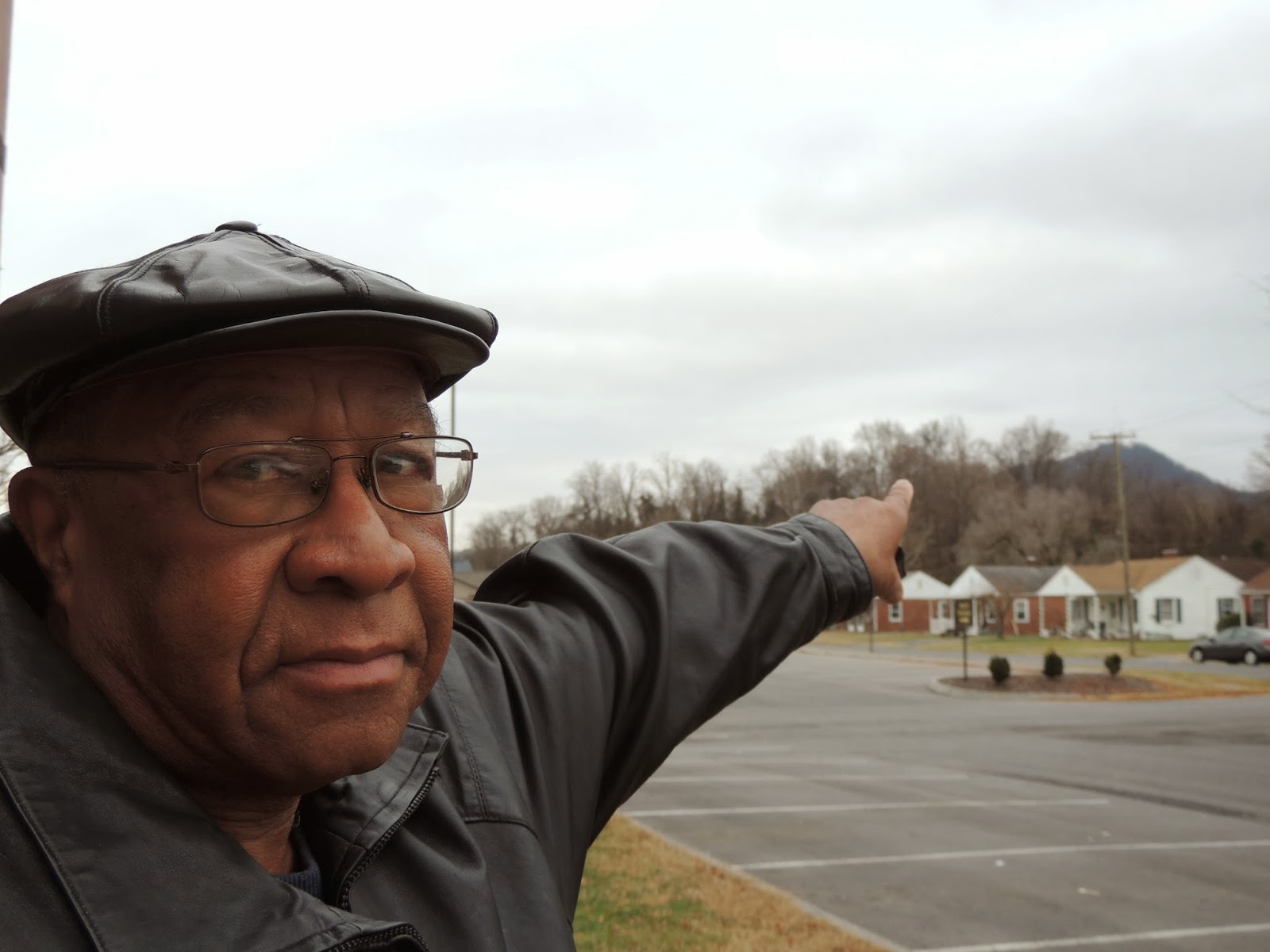 That's a sentiment echoed by Willie Hodges as well.

"Phillip (Horton's) mother had bought him a .22 rifle and my mother had bought me a .22 rifle, single shot," he says. "We'd go over to Luke Fuller's and get a box of 22 shells for 50 cents. Of course, off we'd go to Clay Hill to practice. You could shoot up there because back then, Clay Hill wasn't part of the city.. once you climbed the hill behind Mr. Dobbins' house, you weren't in the city anymore. We'd go up there at Tiger Hill and set up targets, and shoot and shoot until we ran out of bullets. We'd come back down, get some more money and go right back up there the next day or the next week."

"The lead we put into that hill," he remembers. "It was amazing." 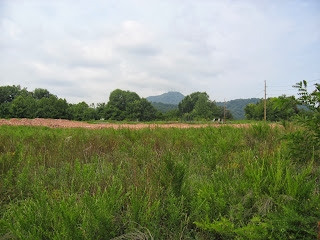 SITE OF THE PROPOSED LARGE BALLFIELD IN THE FIELD LOOKING TOWARDS BAYS MOUNTAIN, WHERE CLAY HILL ONCE STOOD


It's easy to see Clay Hill's place in the history of the Riverview Community. Today, it is considered sacred ground to generations of residents of Riverview and alumni of Douglass.

"I think the city should remember Clay Hill and what it meant to the thousands of people who grew up in Riverview," Veronica Camp says. "Just like they remembered the history of Douglass in the V.O. Dobbins building.. that is our old school, and Clay Hill is our old playground. I don't know how they can do it, but they should do it in some way. Clay Hill is something that was passed down through the generations, because we had no other place to play."

"Riverview folks would say 'as much as we played up there, it is so nice that they named this ballfield area, this recreation area after the place it was before," he says... "that they thought enough of the Riverview and Douglass alumni community to put ball fields up there and name the area in honor of the generations of kids who played up there back in the day."

"I think that would be awesome."

COMING UP.... THE GENERAL SHALE PROPERTY BECAME VERY BUSY AFTER THE COMPANY CLOSED THE PLANT AND ABANDONED THE LAND.... BUSY, NOT FROM ANOTHER INDUSTRY MOVING IN, BUT MANY NEIGHBORS WHO OFTEN TAKE OVER ABANDONED PROPERTY AS THEIR OWN.... THEY THOUGHT NOBODY NOTICED THEM, BUT THE FOLKS IN RIVERVIEW KNEW THEY WERE THERE.....

IN PART 4, FIND OUT WHAT MOVED ON THE GENERAL SHALE PROPERTY, AFTER THE BRICKS MOVED OUT.

Posted by douglassriverview at 10:02 AM