The New Eastman Ballfields - The Impact on Riverview and the Future of the Entire Brickyard Site, Part 4

FOURTH IN A SERIES 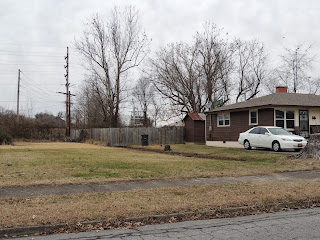 "There's been a lot of noise coming from the brickyard, and since it's been abandoned, there's not supposed to be any noise from there at all."

That's the word from Vicki Smith, who has lived on the side of Dunbar Street with the now-empty General Shale facilities right behind her. Seems, when Shale employees left for the last time in 2011, someone else moved in.

"People started using the site as a dumpster.. a place to bring all of their garbage," says Mrs. Smith. "With that, came raccoons, possums, skunks just like we used to see on Clay Hill. And rats... huge rats running through the weeds just like dogs and cats."

She says, complaints to the city stopped that activity with the garbage being cleaned up and she says, thing quieted down. 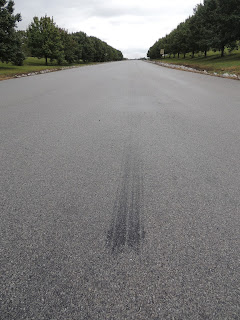 SKID MARK, INDICATING A RACE CAR START.  THIS IS ON THE PAVEMENT OF THE ENTRANCE ROAD TO GENERAL SHALE, FROM INDUSTRY DRIVE


But then, gradually at first, then at a huge pace... the empty entrance roads became a drag strip.

"You could hear it all the time," Mrs. Smith says. "It would wake you up at night, and you couldn't even go out in the yard at dusk. There are a lot of elderly people on Dunbar Street and when they hear the tires squealing, they think something's going on."

"One police dispatcher I spoke with, acted like she didn't know where it was, because I didn't know General Shale's address," Mrs. Smith says. "Finally, I got through to dispatch, and the woman told me they'd had more complaints, that they'll send a cruiser. They would come in spells, then that stopped. About that time, the dirt bike riding started. It just seemed that whatever anybody wanted to do over there, they could, because it was vacant."

"Neither the police nor the trespassers were respecting the fact that neighbors on the other side of the fence in Riverview did not want to be bothered by all that noise." 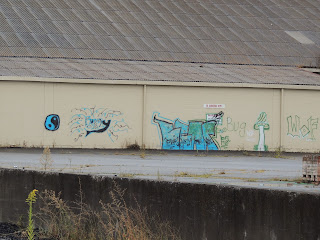 Outgoing Kingsport City Manager John Campbell says, police are well aware of the problem of drag racing, vagrants and people with no business on the General Shale property.

"We are making sure that police drop in on the abandoned site from time to time," Campbell says. "I go in there myself randomly from time to time to check on the property. I've really never seen anybody else ever in there, but nobody should be over there except people authoritized to be there. If we catch them over there without permission, police will deal with it."

"I'll mention that to the police again and make sure they monitor the situation with an eye towards trespassers."  (to date, this writer has seen police ride through the Shale property several times). 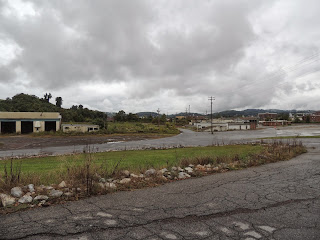 THE ABANDONED GENERAL SHALE PROPERTY, WITH CEMENT HILL (OWNED BY DOMTAR, RISING BEHIND THE SERVICE BUILDING ON THE FAR LEFT

Although he will be leaving his city manager post this coming July, 2014, Campbell has been very much in tune with developing the General Shale property. In some cases, he and his staff have fine-tuned plans for particular areas of it, like Cement Hill.

"We actually have some money set aside to purchase Cement Hill from Domtar, the owner," he says. "Our vision for the past few years, is to make it a passive recreation area, unlike the active recreation area the ballfields would be. You'd have walking trails and mountain biking trails around Cement Hill, leading to the top, with a flagpole for the American Flag at the summit that you could see from Broad Street below. The idea of taking advantage of the views from up there, with picnic shelters and benches at overlooks. We've even thought about a waterfall of some sort and trees across the railroad tracks behind the train station." 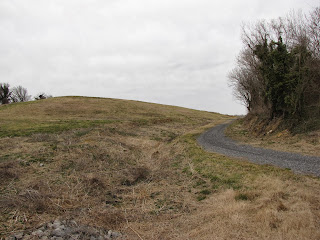 Turns out, the top part of Cement Hill where the view is the most spectacular, has its own issues.

"Believe it or not, the top part of Cement Hill, pretty much in the middle of the flat area where you went up to observe and take pictures, is actually a covered landfill," Campbell says. "We just think there's a lot of potential use for a passive recreational area for people there. The athletic use for mountain bike trails is pretty good for that kind of thing."

Campbell says, the possible development of Cement Hill was also part of the Model City Coalition effort, which stalled while another project planned for the area moved to the forefront. When that project was tossed out, the idea of the passive park moved back to the forefront.

Campbell says, access from the Cement Hill area and the ballfields, to the neighborhood of Riverview is being considered, although as his assistant Chris McCartt says, nothing definite is on paper yet. He says, this first phase of planning is crucial to laying out a framework of the ideas that have been suggested. 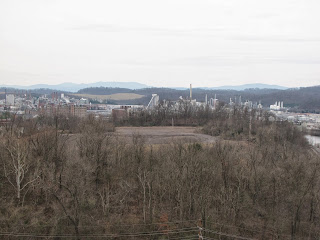 Any kind of development might work for the Dunbar Street residents of Riverview.

"I, for one, really wouldn't mind if the ballfields went in at the brickyard," Vicki Smith says. "It's giving kids something to do, and whereas ball games cut off by a certain time, drag racing never does. Just looking at the Eastman ballfields and the ones at Domtar Park, they are well-kept, very well groomed." 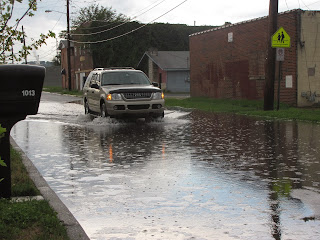 FLOODING ALONG M.L.K. DRIVE IN FRONT OF THE ELKS LODGE, ONE OF 4 AREAS ALWAYS UNDER A FLOOD WATCH IN RIVERVIEW DURING A HEAVY RAIN


She also says, extending MLK into the brickyard, might solve a few other problems, too.

"Sometimes, it makes you think the city doesn't listen enough to us here in Riverview when we complain about things," she says. "For example, if they extended MLK, that would force them to also fix the flooding problem we still have in the community. If there are problems on the ballfields or on Cement Hill and there is access to MLK, maybe that would make the city look at our neighborhood infrastructure problems closer."

But as far as moving the Eastman ballfields from one side of Riverview to the other would be welcome to Mrs. Smith.

"Anything the city puts on the General Shale property would be better than what we got now."


AND IN PART 5.. MORE ON THE VISIT TO CEMENT HILL WITH ONE RIVERVIEW RESIDENT WHO GREW UP THERE, AND A LOOK AT FINAL PLANS FOR THE BALLFIELDS AT RIVERVIEW.
Posted by douglassriverview at 8:23 PM