Plumbing at the Kingsport Kitchen of Hope: Former DB Athletes Take On the "Griddle Iron" to Help 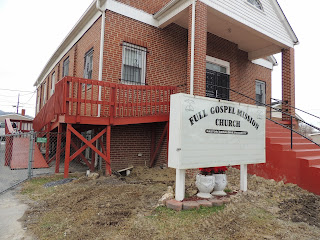 For 13 years, Kingsport's Kitchen of Hope has been a beacon of hope for the homeless.. at various times, it's had to weather many trials and tribulations to keep its doors open, to feed people not knowing where their next meal is coming from.
But when the water pipes burst in the Kitchen, in the basement of the Full Gospel Mission Church on East Sevier Avenue, it was more than the system could bear.. the facility had to shut down for health reasons for a few weeks, leaving Kitchen Director Pastor Gerald Swagerty in a quandry in her godly mission to minister to the homeless.
The Kitchen of Hope is in the basement of the Full Gospel Mission Church... the burst pipes extended outside, just behind the sign in this picture

She estimated the total bill to repair the pipes to correctly be between $6,000 to $8,000.
Since the Kitchen of Hope is an emergency food source for the area's homeless, it took an emergency move to try to come to its rescue. 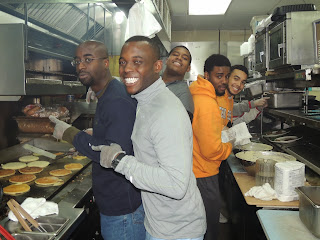 The resulting Pancake Breakfast this past Saturday, December 28th was a step in the right direction. The event was sponsored by the New Vision Youth, and with a $5.00 donation, visitors were treated to pancakes, sausages and coffee. 300 to 400 people came out to the event.
Former D-B athletes Teddy Gaines, Blake Leeper, Brenton Leeper, Malik Foreman and Devaun Swafford all jumped at the chance to return home and lend their support to raise money for the Kitchen's pipe repair bill. 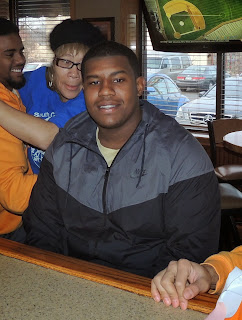 "Helping people is something that makes you feel good inside," says Brenton Leeper, now an offensive lineman at UTC. "I'm not oblivious to the fact that a whole lot of people in our community are struggling to eat every day. They can use some extra help out there right now, and the Kitchen of Hope provides that."
"The fact that my efforts can help improve someone's life, even helping with a decent meal, is a good feeling." 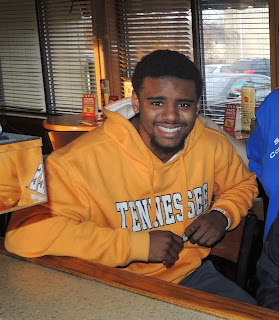 "It's good we can come home to help," says Malik Foreman, a freshman defensive back who is becoming well known in that role at the University of Tennessee. "Making a positive impact just by being here, saying 'what's up' to everyone.. it feels good. Events like this make me want to do even more for the community, help raise money.. do whatever I can to make my home community a better place."
"Something inside still makes me want to be at a bowl game right now," he says, "but if that is not possible, I'll jump at the chance to come home and help a great place like the Kitchen of Hope. I've seen what it does for people, and the fact that it puts food out there for the homeless, makes it all worthwhile." 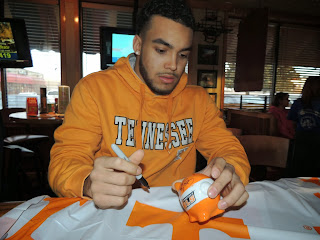 His teammate at UT, Devaun Swafford says, nothing would have kept him away, once New Vision Youth Director Johnnie Mae Swagerty called and told him their appearances would help bring people out to raise money for the Kitchen of Hope.
"Helping the Kitchen is a heartwarming experience," Swafford says. He's enjoying great success as a freshman nickelback on U-T's defensive line. "It's always heartwarming when you're able to give back to the community. To know that you've helped somebody out.. that you were there for them when they needed it the most. I don't feel like anything can hold you back when you're helping somebody out that really needs the help like the Kitchen of Hope. With a fundraiser like this today, you can help in so many ways.. it gives the community something to come out and support."
"When Johnnie Mae called us, we had to come out and help as soon as we could and throw our support. Anything for a good cause like this, and I'm ready to help." 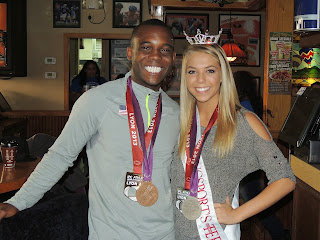 What's it like, helping the Kitchen of Home? Just ask Blake Leeper, U.S. paralympic track star.
"The reason it feels good," he says, "is because you're helping in a small way, to provide a hot meal for somebody, whether it's today or the next day. There are simply some good people in our community who don't have food.. who don't know where their next meal is coming from. They didn't have a ham or turkey for the holidays. We've got to help the Kitchen of Hope, and get those pipe repairs paid for. When we sometimes forget what the holidays are all about, just take a look at what the Kitchen does, and it's easy to give back to the community.
"We're not trying to change the world," he says. "We're just trying to change one life at a time and give them one less worry to think about while they try to bounce back. That's where I think it's huge that we can try to help them get back on their feet. It trickles down to helping the Kitchen do its job. And you can't do that with bad pipes." 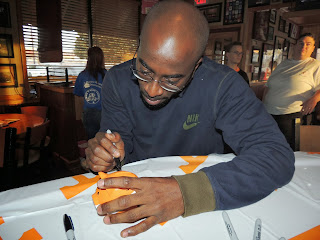 "It's our service to help whenever we can," says Teddy Gaines, former DB, UT and NFL player, who is now an assistant coach on ETSU's revived football program. "The Kitchen of Hope is always helping people and I'm just like all of my buddies here.. just trying to help them raise money anyway I can, They were old pipes and you can't predict when they're gonna go. Repairs cost money, and all of us were just happy to help encourage people to come out and contribute to the repair cost. It's necessary."

"A lot of people helped me along the way. If I can help somebody else along their way, it gives me a great sense of pride. I feel that it's a purpose to help anyway I can." 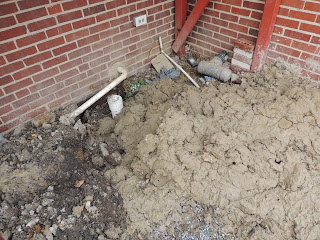 "The guys from Steve Huff Plumbing had to not just fix and repair the inside pipes," she says, "but they also had to dig up the pipes out front of the church. That took a lot of time and cost a lot. We just thank everybody who came out and made donations and contributions."
She says, it has been difficult for the homeless since the Kitchen had to temporarily shut down. On a regular day, the Kitchen volunteers will serve from 100 to 125 people. Some of them depend on the Kitchen, and nobody wants to see them go hungry..
"They've been going over to the Salvation Army, where the Kitchen of Hope has a partnership," says Swagerty. "It strains their services because the Kitchen takes some of the burden of feeding off of them." 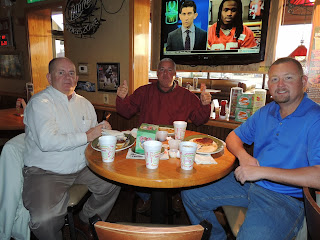 As of January 1st, the Pancake Breakfast raised a total of $7,010 dollars, midway through the $6,000 to $8,000 dollar repair bill. Swagerty says, the generosity of the people of Kingsport never goes unnoticed, and the total eclipsed the $7,000 dollar mark as January 1st approached. By the Grace of God, it is still climbing.

"It's a blessing to see all the folks who came out today," she says. "From the athletes, to the folks at Applebee's and manager Tim, to the New Vision Youth who gave up a Saturday to serve the pancakes, I want to thank everybody involved.. Unome (Greg Spann), the pancake chef, volunteers from Robinson Middle School and the Kitchen of Hope, the Power Point Ministry Church, Calvin Sneed from the Sons and Daughters of Douglass Alumni, Jonathan Radford from WCYB-TV, and the Kingsport Times-News."
But the biggest thanks she says, goes to everybody who contributed.
"The wonderful people of Kingsport were just beautiful," Swagerty says. "They took the time to come in, have some great pancakes and good fellowship, and at the same time, help the Kitchen of Hope in its mission to feed our homeless neighbors."
A SLIDESHOW OF THE PANCAKE BREAKFAST CAN BE SEEN HERE